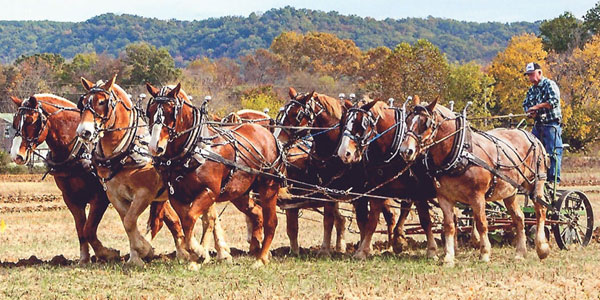 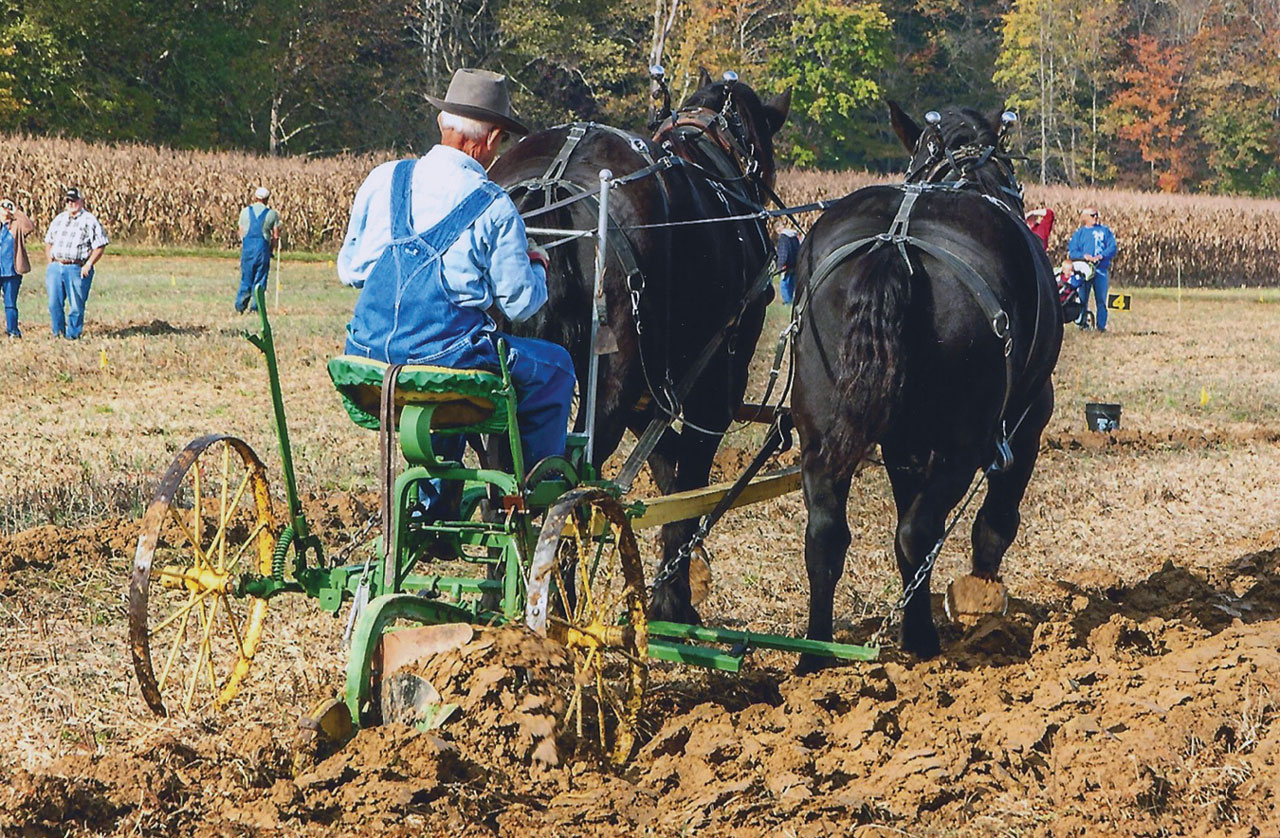 The 13th Annual U.S. Draft Horse and Mule Plowing Contest was hosted again this year by Mike and Joyce Downs on their farm located in Olympia, KY. This is the 2nd year for the competition to be held on this majestic piece of land located in Bath County, KY, where teamsters did not have to do the dead furry mambo in the back part of the field. This year’s competition was held in late October 2017, beginning on Friday, with teamsters competing on Saturday. This year’s plowing contest hosted 21 teamsters, from six different states with multi-generational competitors.

dead furry mombo, or otherwise known as the dead furrow mambo, is a secret – dark of night – line dance and leg shortening exercise most definitely not for the weak of heart. Some fierce plowmen’s wives have been known to sell tickets for this brief and revealing flutter of fancy farmer feet and banjo bottoms. – LRM

The weekend was teeming with life starting on Friday, practice day; this was a time for the teamsters to get into the field and get a little dirt on their plows. The teamsters used their time to reconnect with those from the previous year’s competition and introduce themselves to the newcomers. Volunteers Gary Hopkins, Gayland Neal and Bill Kuhnull started their day out by setting up the plowing plots, walkways for spectators, helping teamsters get situated and providing a helping hand with whatever was needed to be done to make this a successful weekend of plowing. Lynn Neal, Darlene Kuhnull and Mrs. Watkins were just as busy with checking in the teamsters, getting and maintaining the score sheets and keeping all of the paper work in order. These great ladies provide an invaluable service to making the weekend’s competition run smoothly and efficiently. However, Lynn Neal’s most welcome task is to provide me with a good luck hug before the competition begins. The volunteers that support this event are irreplaceable and provide a welcoming environment to all. 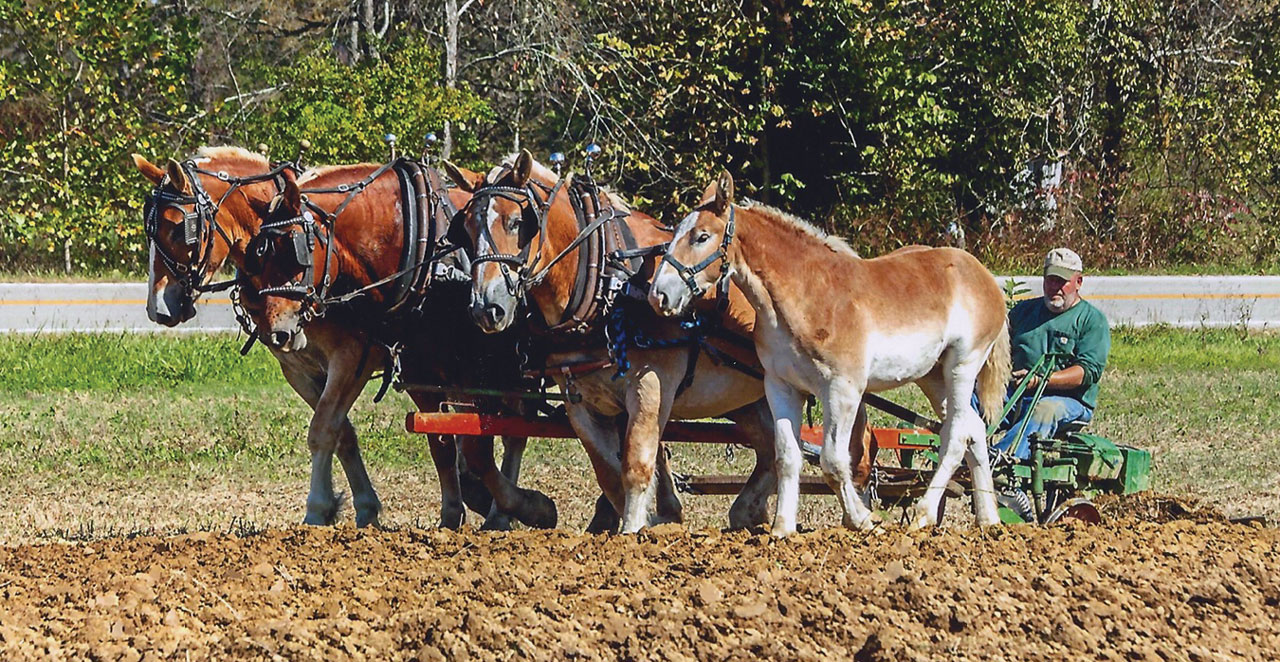 As Friday came to a close, Doug McClain had prepared a wonderful meal provided by the Bath County Extension Service Office. This gave competitors, their families and volunteers time to gather in Mike and Joyce Downs’ new barn to share stories, visit and enjoy each other’s company.

As the sun begins to rise on Saturday, competition day, we are blessed with a cool, clear morning and a promise of a sunny day to plow our plots, meet with friends and spectators and joke with each other. The plot numbers have been drawn and the starting time is 10:00 am. Each group of teamsters has 2 hours to finish plowing their plots before the next set of teamsters begin. This year, the plots are divided into 3 groups for 21 competitors. The plowing field is alive with activities, with multiple plowing classes and spectators of all ages.

Our judges consisted of Danny Wingate, Ryland Moore and Gary Hamilton. Bobby Stull was the weekend’s announcer, who also provided us with bluegrass and country music, keeping the spectators informed and entertained during the down times. Photographer, Rick Conley, is not only well versed in photography, but is very knowledgeable about plows, horses and mules. He is always willing to lend a hand. Plus, he is the recipient of the Bob Hope Award — “Thanks for the Memories.”

Not starting in a particular order I would like to mention a few of my fellow teamsters. First, our host Mike Downs plowed in the Open Class. He was only able to plow one plot due to his dedication to the kids that came out to observe the competition. Mike and his team of gentle Belgian geldings allowed kids as young as the age of 5 years to get an opportunity to plow, passing on this age old tradition of working your land and learning about the animals. 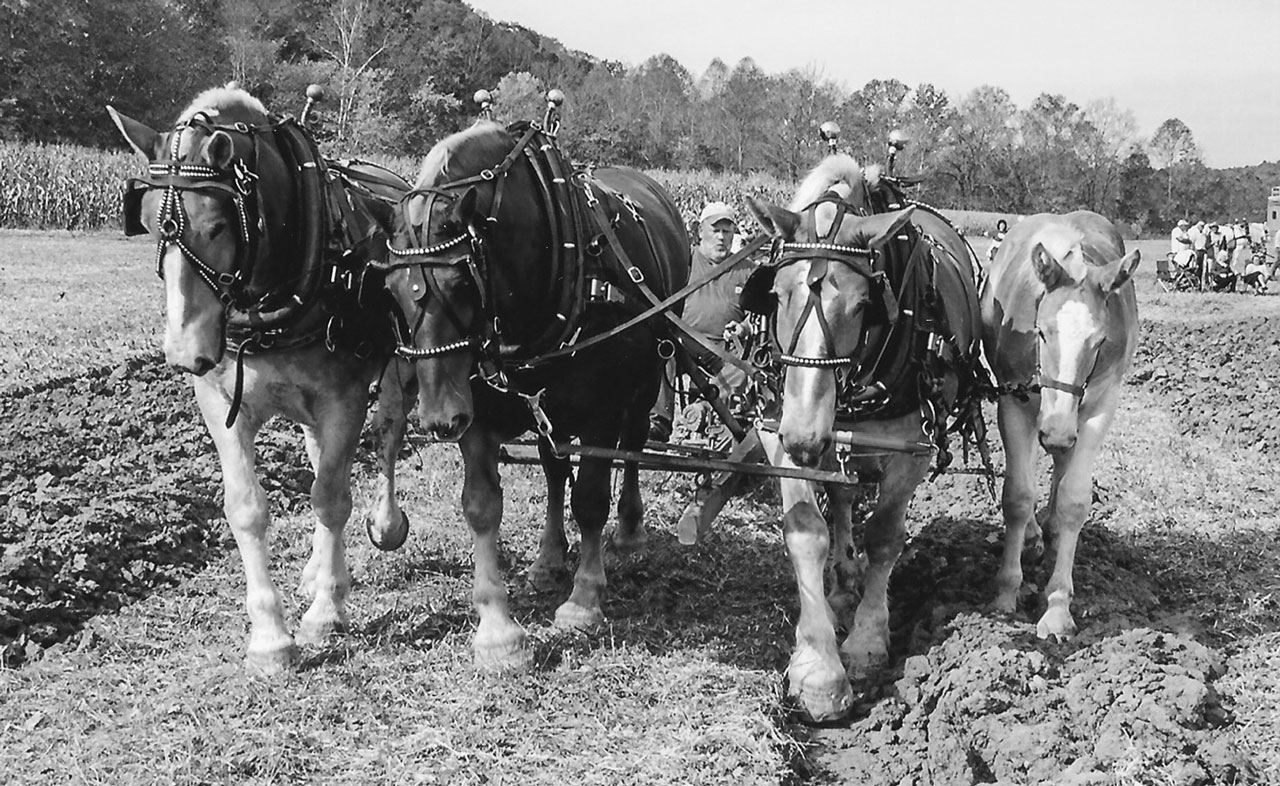 Observing the Gangplow Class we witnessed Charles Orme from Kentucky, an 82 year youngster, plow with a Pioneer 2-bottom plow pulled by seven magnificent horses. It is something to see him coming through the field. Charles Orme was not alone in the field, his sons Charlie Orme and Mike Orme, plus grandsons Tyler and Clint Orme were also competing. The Orme family was not the only multi-generational family represented. The Perdue family from Maryland with Oren Perdue (Reserve High Points Winner), son Paul Perdue, Sr. and grandson Paul Perdue, Jr. competed and did a fantastic job. Oren Perdue’s teams of mules were only purchased a few months before the competition and were working well as a team. Plus, Renee Perdue, wife of Paul Perdue, Jr., started the day’s events out singing the National Anthem, which warmed the heart and brought tears to your eyes. She is an amazing young woman with a wonderful singing voice. 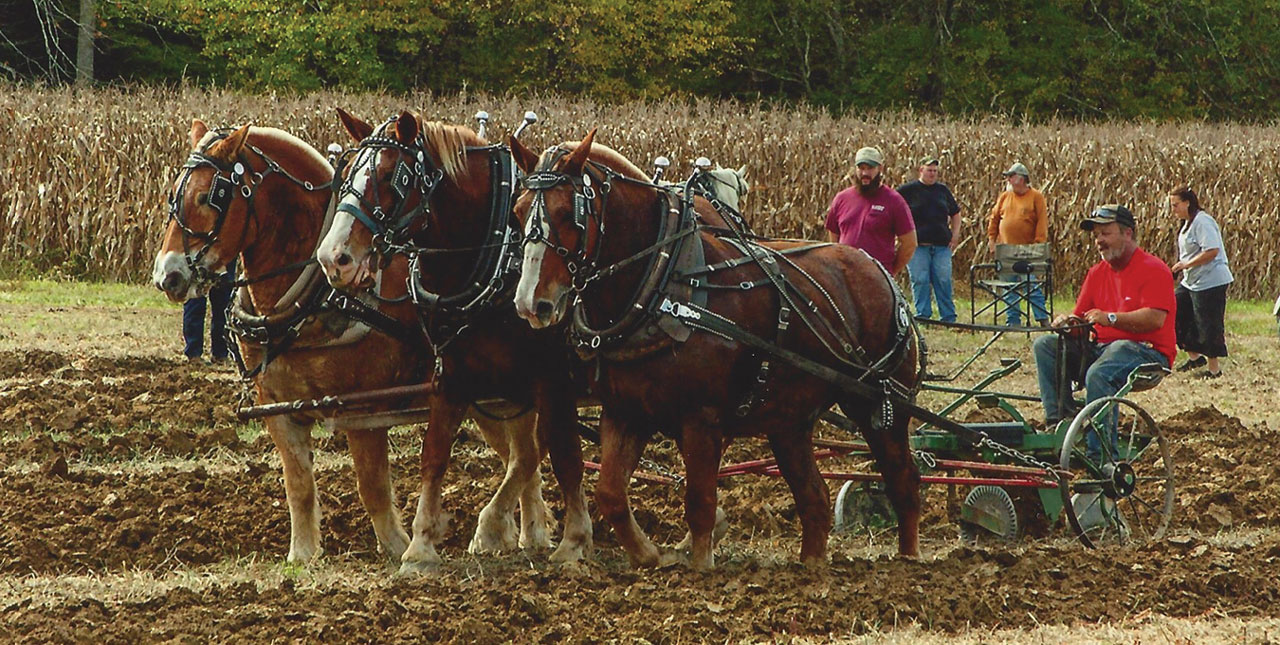 Paul Vandelaan from Michigan plowed with two beautiful Percherons. Scott Link of Ohio was also in attendance plowing with 3 horses, on the off side his 2 year old mare Kate, who did a fine job in the field, with baby Bess walking alongside for training and for the spectators to ooh and aah over. Roger Vogel, also from Ohio, plowed with 2 well-mannered mules. Mark Watkins of West Virginia plowed with a team of three.

Our newcomers to the plowing competition this year included Brett Seal, Roscoe Goode, Marshall Cofer, Rod Pattison, Jr., Megan Wolfgang, Dante Marshall and Gary Kisamore. Between plowing, Rod Pattison, Jr. and Megan Wolfgang were finalizing their wedding plans for the following weekend; wishing you both many years of happiness! Gary Kisamore switched from judging to competing. 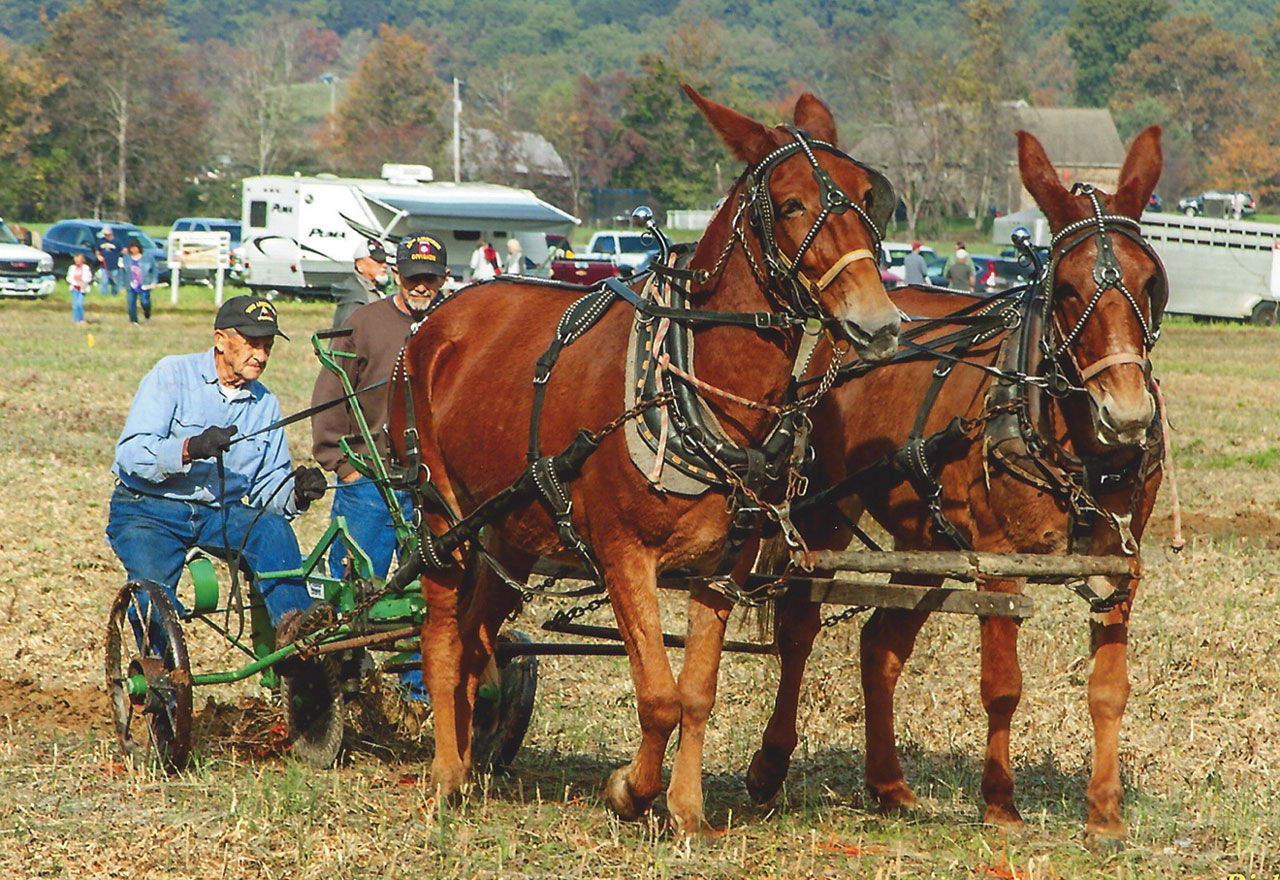 Winner and runner-up in each class were as follows — 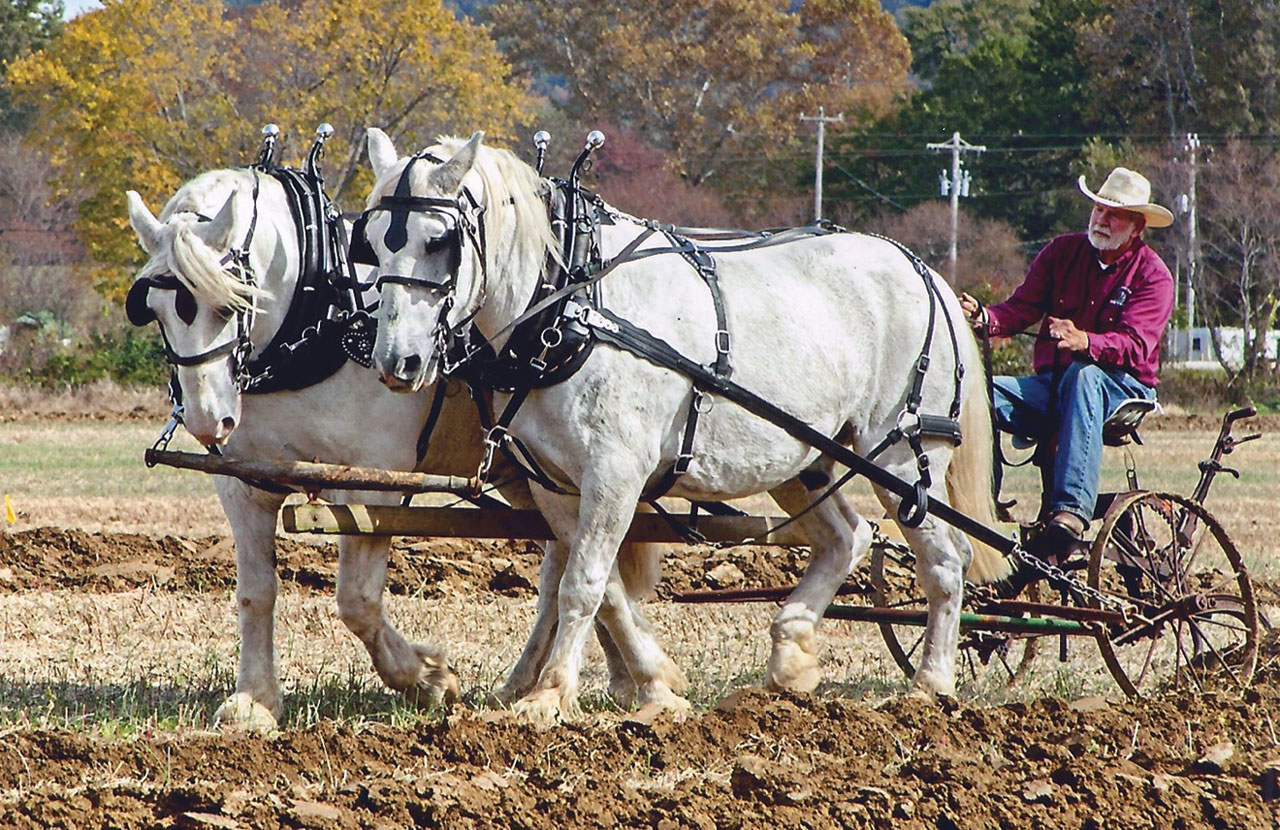 Sunday was opened up with Sunday Services presented by Oren Perdue and Mark Watkins. After the service I hitched up my mules and headed out to the field. I had decided to stick around this year to help plow all the dead furries shut and level up the field. This gave me time to reflect back on the weekend’s events, friendships rekindled, and the meeting of new friends that took place over the last couple of days. There is nothing like a peaceful morning with my mules, sitting in a freshly plowed field to witness the beauty God has created all around us and me.

A special thank you to the folks at Journey’s Inn Lodge for making my stay a little nicer. 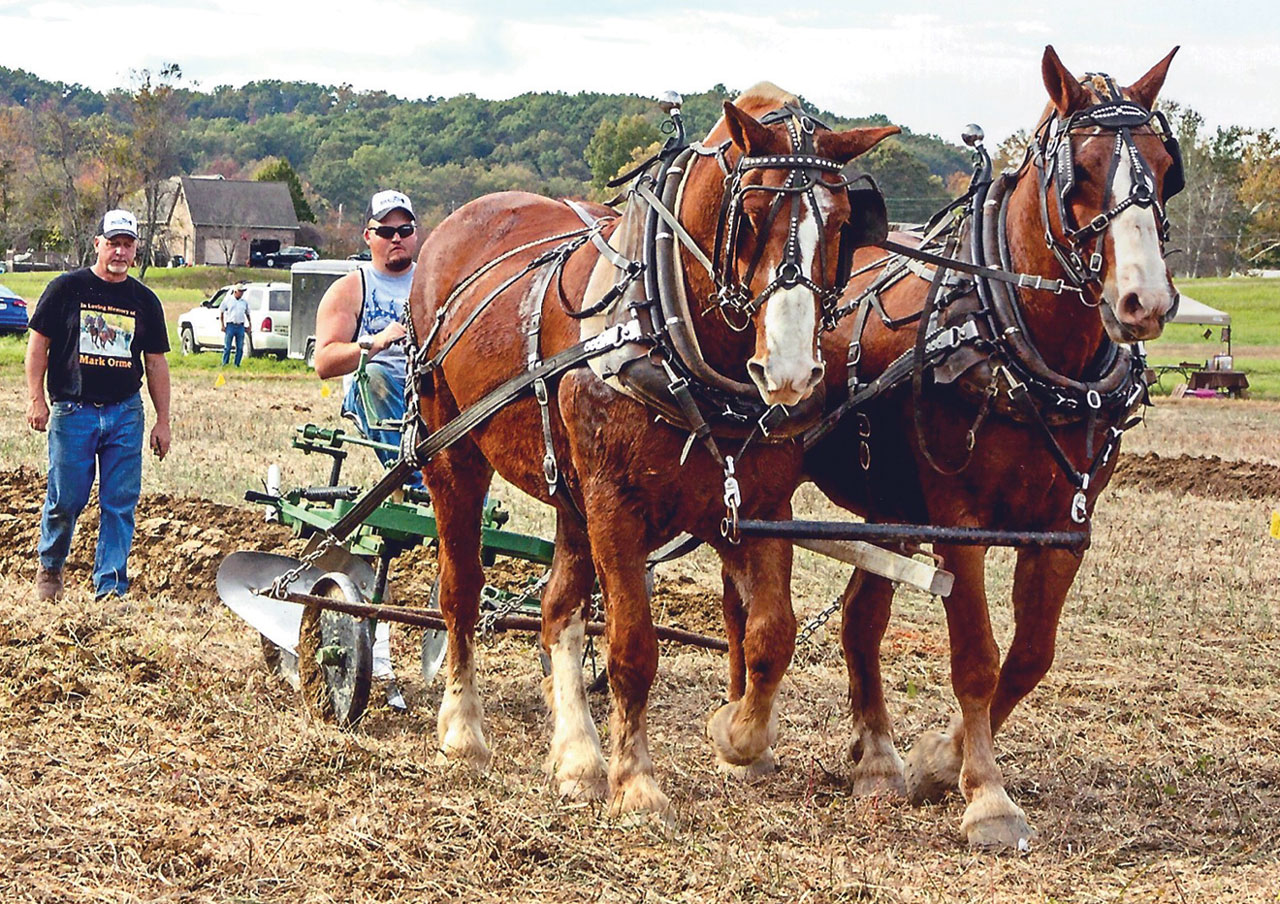 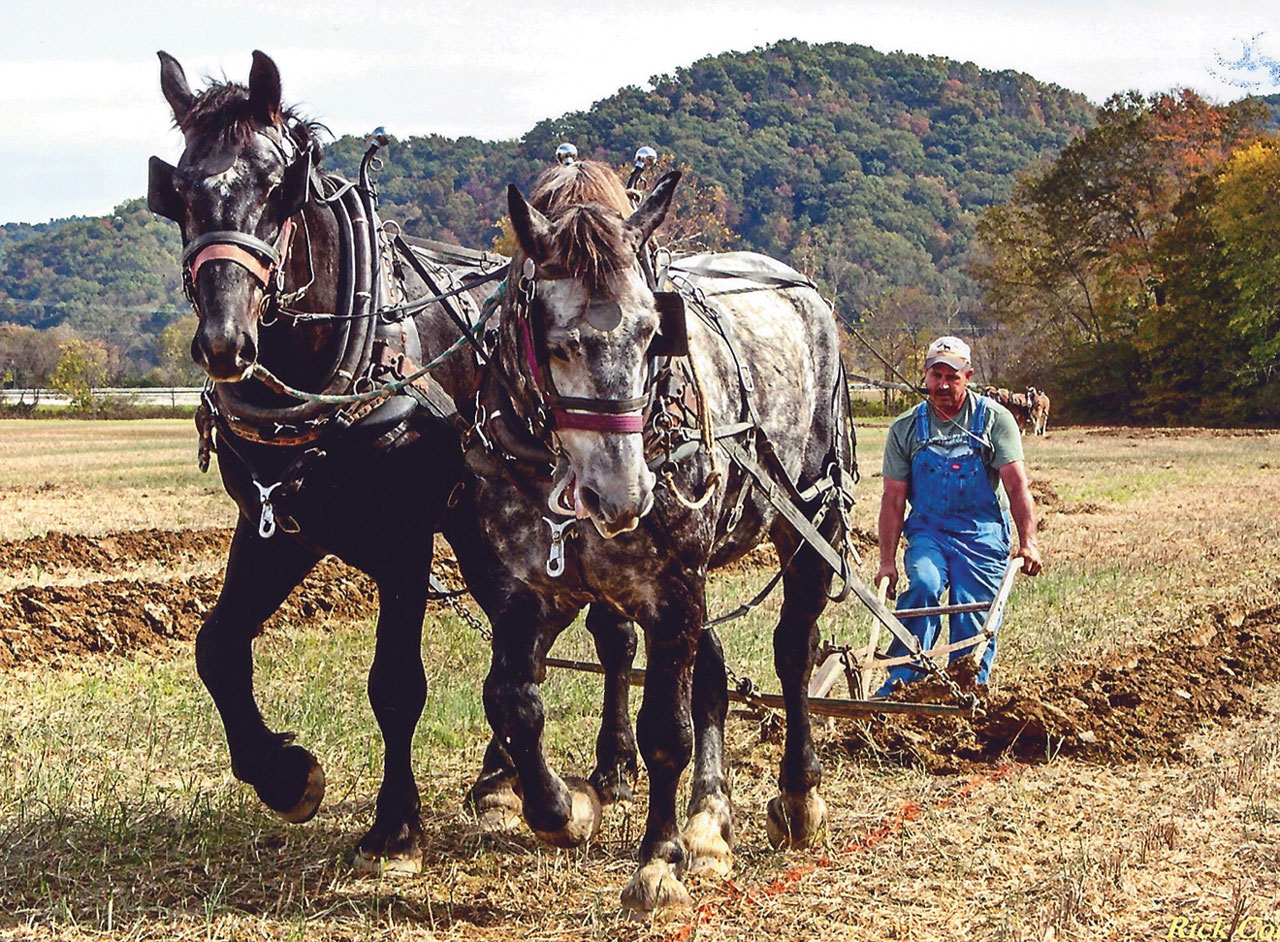 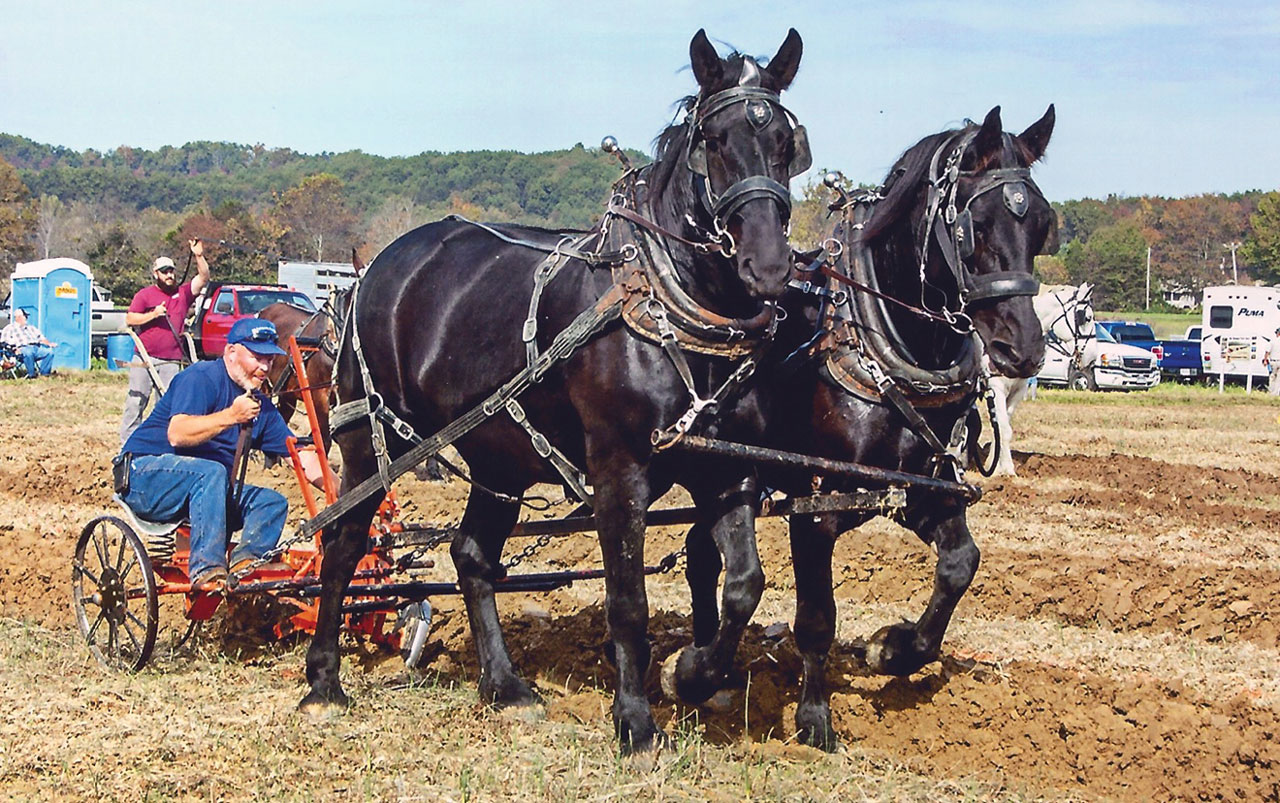 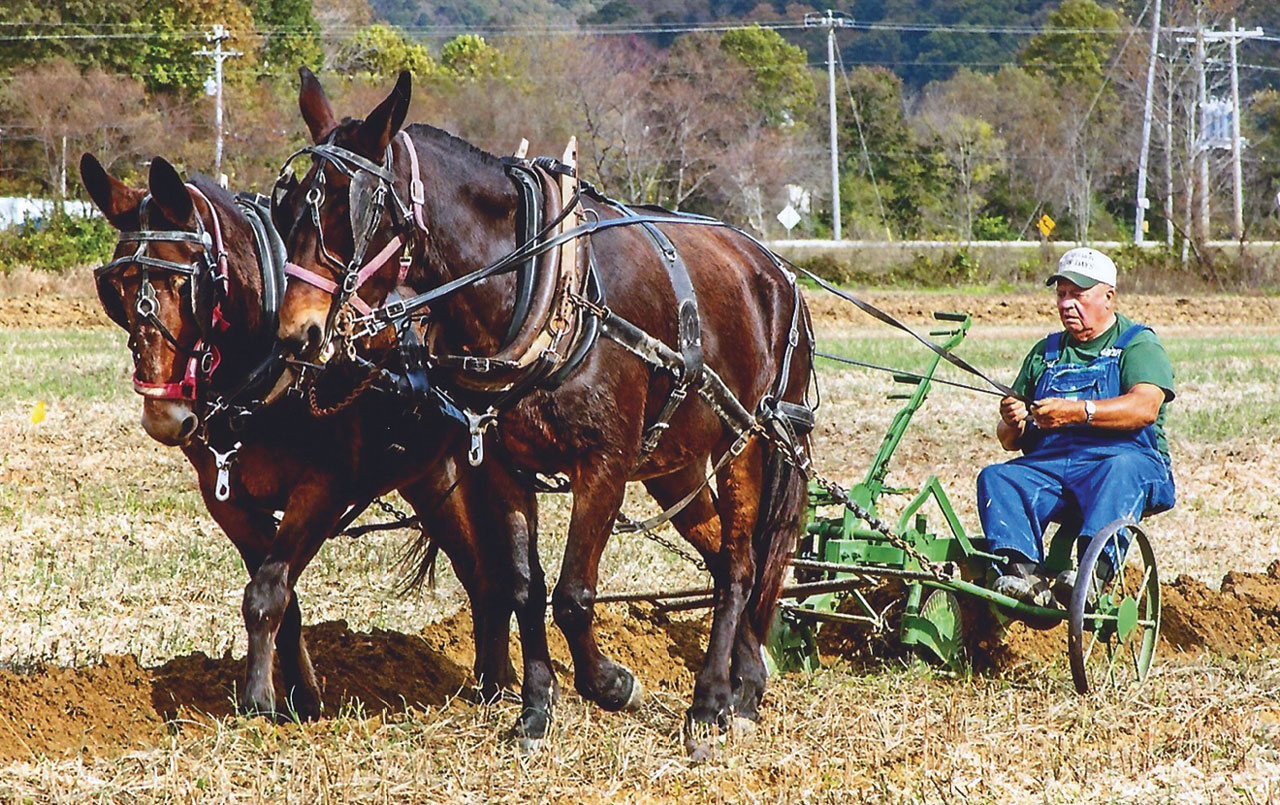 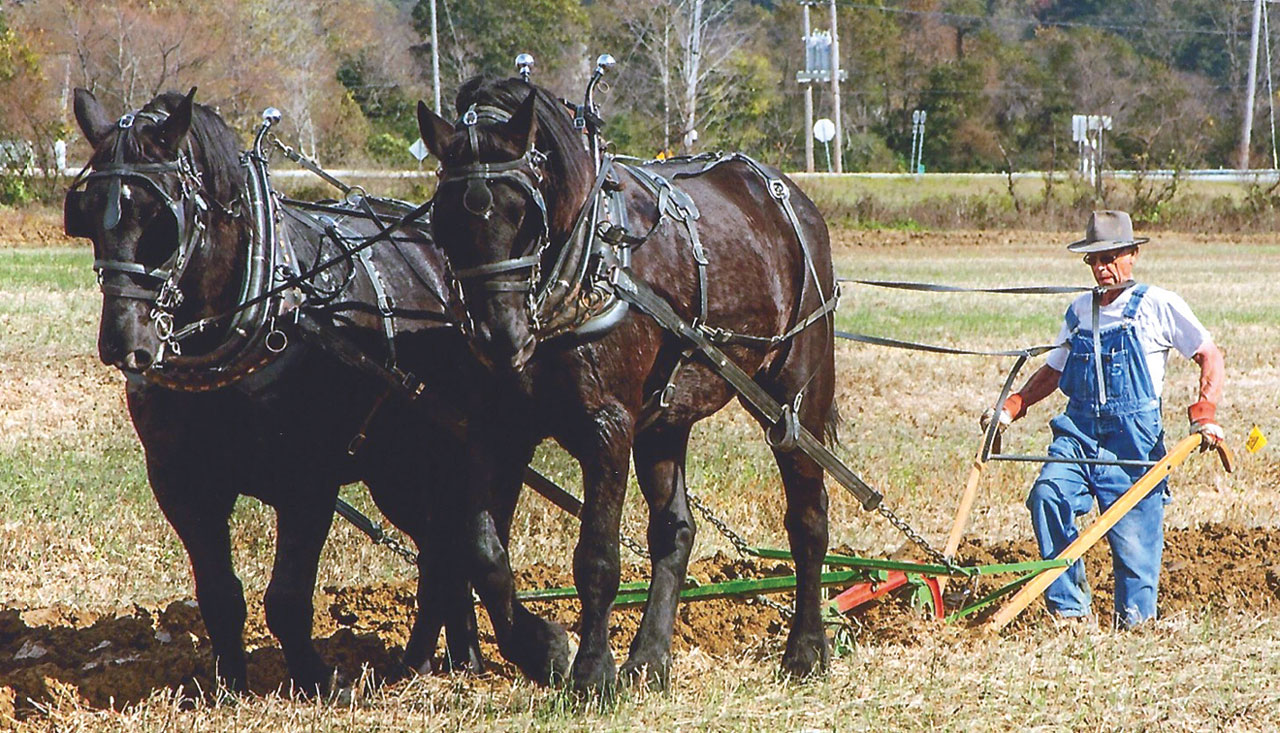 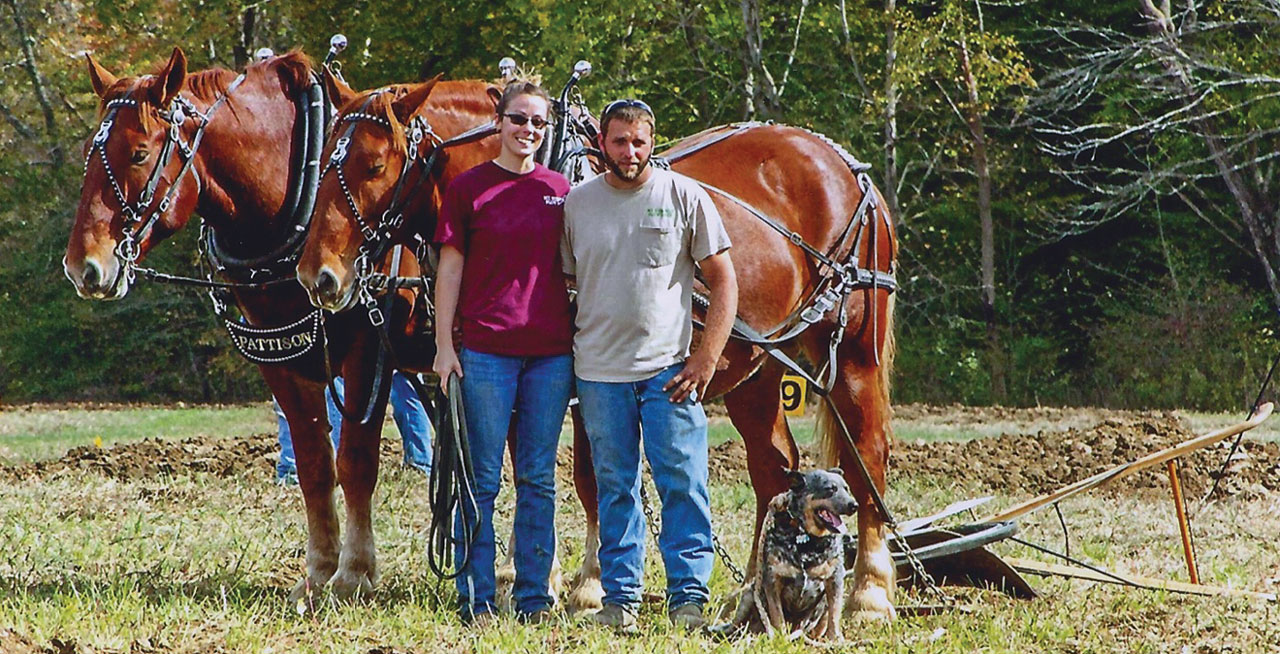 Rod Pattison and Megan Wolfgang, scheduled to be married the following weekend. 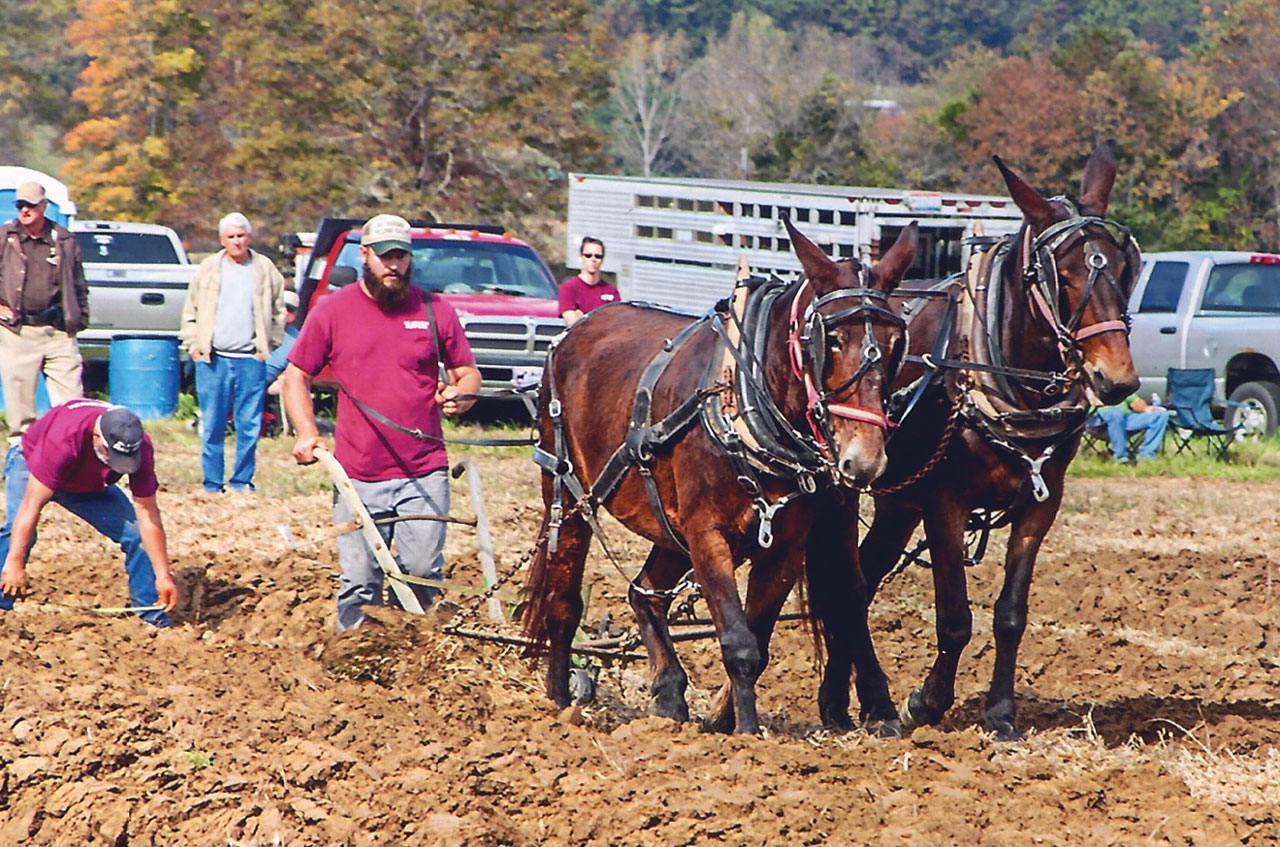 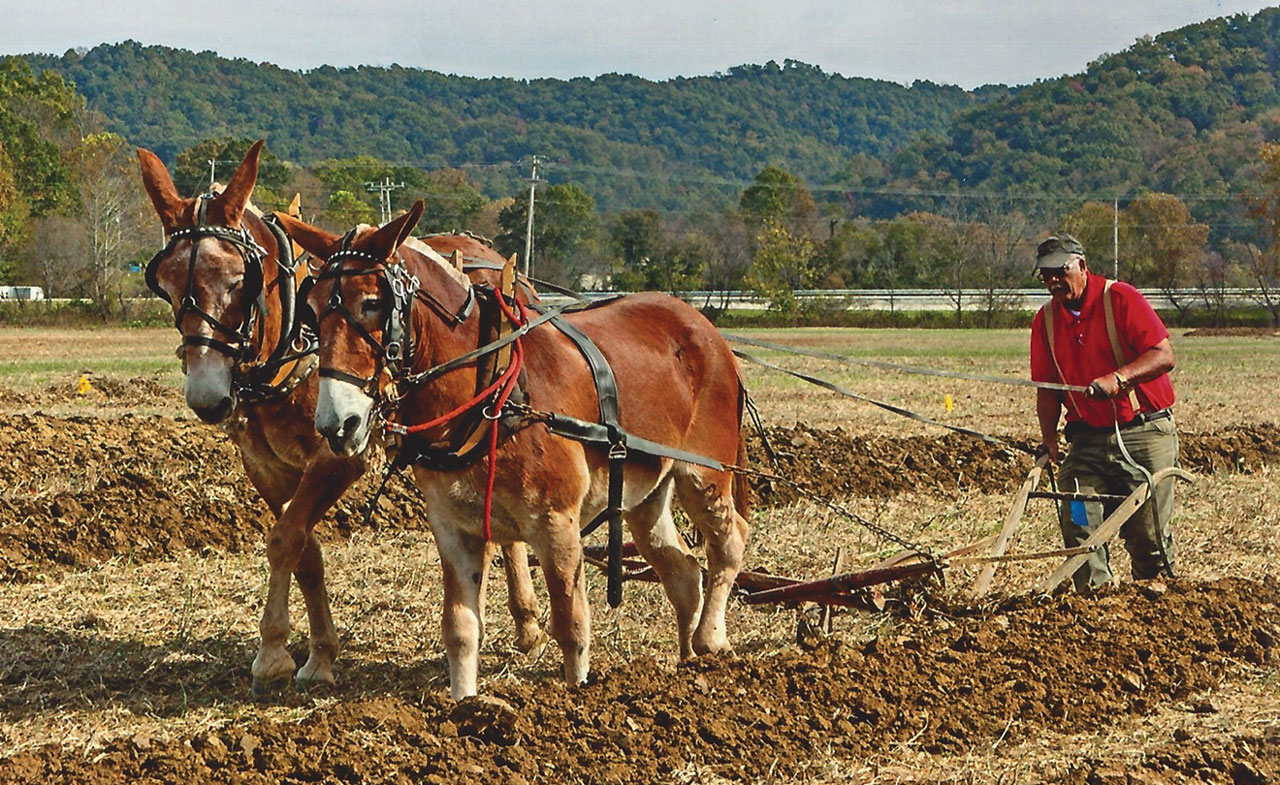 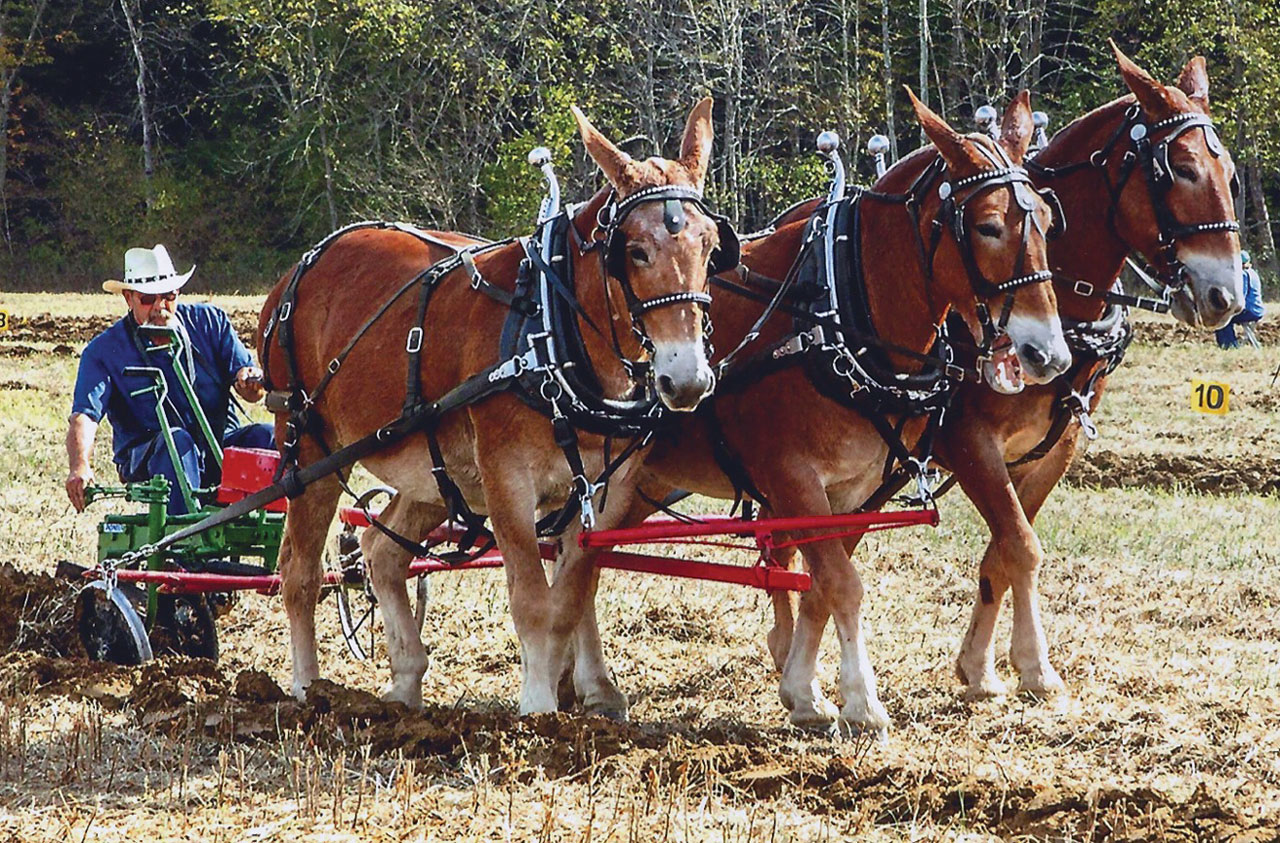 Group photo of all competitors.