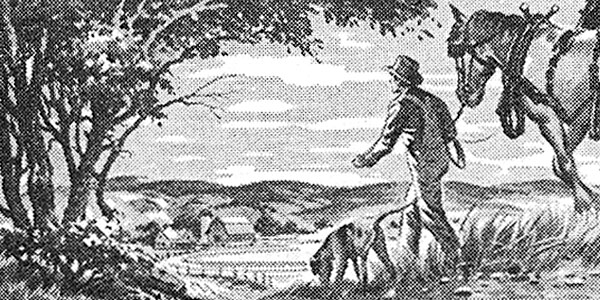 A Bad Day in Harmony

A Bad Day in Harmony

When you keep livestock you’re bound to have dead stock — it’s an inescapable consequence. The most that any caring and responsible owner can do is to make sure that, while his animals are alive, they are well cared for, and when their time comes to move up to that big pasture in the sky, their departure is as painless as possible. If, like most people, you don’t have the stomach to accept this reality, read no further. The following story, although true in all respects, is not for the faint of heart.

I had a horse that lived up to every expectation that I could have possibly had for her. I called her Lady; she was a chestnut mare with a white blaze and stockings, well built with a beautiful head and a strong body that was suited to both riding and working. Originally she had been used as a workhorse and the only regret that I had when I purchased her was that her previous owner had followed the tradition of tail docking. She was so wonderful in every other respect that I forgot that one imperfection.

As a part time horse trader scads of animals passed through my hands in the many years that I owned Lady, but I was never tempted to part with her. We shared many adventures in the course of our time together and I thought more of her than I did of most human beings of my acquaintance. The years with her went quickly and one day I had to admit that she had become an old horse and that the series of painful afflictions that often accompany old age in horses had caught up with her and were making her life a living hell. I knew what I had to do and I steeled myself to make the arrangements.

I made the phone call to my neighbour Gary Parker – he owns a backhoe and had helped me with several equine internments in the past. I told him my family was away on vacation and that I would like to get the unpleasant business done before they returned home. I expected Gary to schedule me for a week or so later so when he said he would be over within the hour it really took me by surprise. However, the time was right so I hung up the phone and went to dig out my old pistol. I loaded the gun, tucked it in my belt and with a bucket loaded to the brim with Lady’s favorite treats, I went to join her where she was standing in the pasture. It was her favourite spot and where I planned to bury her.

After saying goodbye to her and rubbing her under the eyes the way she liked I ended her life as quickly as possible while she had her muzzle buried deep in the pail of molasses soaked oats. I had a good cry while I knelt beside her with my hand on her chest feeling her heartbeat slowly peter away until it was still. When my eyes finally cleared up enough to see, I made my way to the barn. I needed to get a chain to move Lady when Gary arrived with his backhoe. Trudging along grief stricken, I turned the corner to the front of the barn and almost tripped over an old pinto mare that was lying on her side struggling to get to her feet. This mare was not the oldest horse I had ever known but she was close to it, well over thirty years. She was just one of the many older animals that, over the years, had been foisted on us by owners who claimed they couldn’t keep them anymore. We hadn’t set out to be an old age home for horses, we were just suckers for a sob story.

The problem with taking on these older animals was that they weren’t going to be around very long and it became our responsibility to see that their passing would be as painless as possible. Horses aren’t subjected to the rigermorole that humans endure when their quality of life reaches its lowest ebb. No tubes and ventilators for them – just a veterinarian’s lethal injection or a well placed bullet from a caring owner. It was a bit inconsiderate of the old pinto mare, after what I had just been through with Lady, to choose that day to pack it in but I could tell by the almost pleading look in her eyes that it was definitely a case for assisted suicide.

As I always did, I mentally drew a line from her left ear to her right eye and from right ear to her left eye and where the two lines intersected sent the twentytwo bullet that ended her suffering. After I finished with my second termination of the day I continued my journey to the barn. My eyes were still misty as I made my way into the darkened entrance so I was taken completely by surprise when two white roosters flew banshee-like out of the gloom and into my face. These two rogue roosters were a pair that had been terrorizing the kids before they left on holidays so I had no qualms about drawing my gun again and sending the pair of miserable little buggers to their maker. By the time I finished with my feathered friends I could hear the backhoe putting away in the distance as it made its way up the mountain so I decided to go to the house, put the gun away, freshen up and wash away any traces of the unmanly tears I’d been shedding. I slid open the patio door and was assailed by a strong smell of ammonia. An old flea-bitten tomcat that Andrea had dragged home recently was staring at me with a wistful look on his face while urinating on our new sofa. I like cats but I am confidant that even the most ardent animal lover would not put up with the tricks that old orange tabby had been up to since he had been “rescued” by my wife. He was the type of despicable feline who prowled the alleys and imposed himself on helpless females for the pleasure of later eating their kittens. He had picked the wrong day to try my patience — I still had one bullet left.

Gary Parker maneuvered his backhoe over to where Lady was lying and I hurried over to join him. Gary was good at his job and it wasn’t long before he had a good size hole scooped out. He throttled back the big machine and looked in my direction for approval. When I indicated with hand signals that he should continue digging he seemed a little confused but reluctantly complied. When he had the hole twice its original size he checked with me once more and was really peeved when I indicated that I required him to take out a few more scoops. Finally satisfied with the size and depth of the hole, I hooked the chain around one of Lady’s legs, attached it to the bucket at the end of the digging arm and Gary gently slid the old horse into her final resting place. I retrieved my chain and Gary was about to start filling the hole in when I stopped him, slung the chain over my shoulder, indicated that I wanted him to follow me and then headed over to where the old pinto was waiting.

Gary was starting to look a little concerned but he complied and we weren’t long getting the second horse over to the hole. He made another attempt to start filling it but once again I stopped him while I went to the barn, retrieved the two roosters and, with an evil grin on my face, deposited them one by one into what was turning out to be a mass grave.

Gary, hoping that that was the lot, revved up the big yellow machine in eager anticipation but once again I called a halt and disappeared in the direction of the house. When I reappeared at the graveside holding a dead cat by the tail Gary shut the machine down completely, remained totally silent for what seemed like a long time, and then leaned out of the cab and with a look of mock concern on his face said in his dry manner, “Where did you say the wife and kids are?”