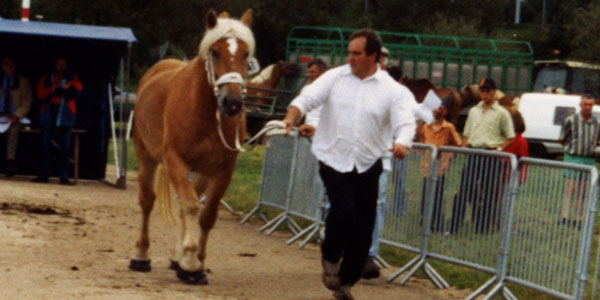 A Gathering of Comtois in France 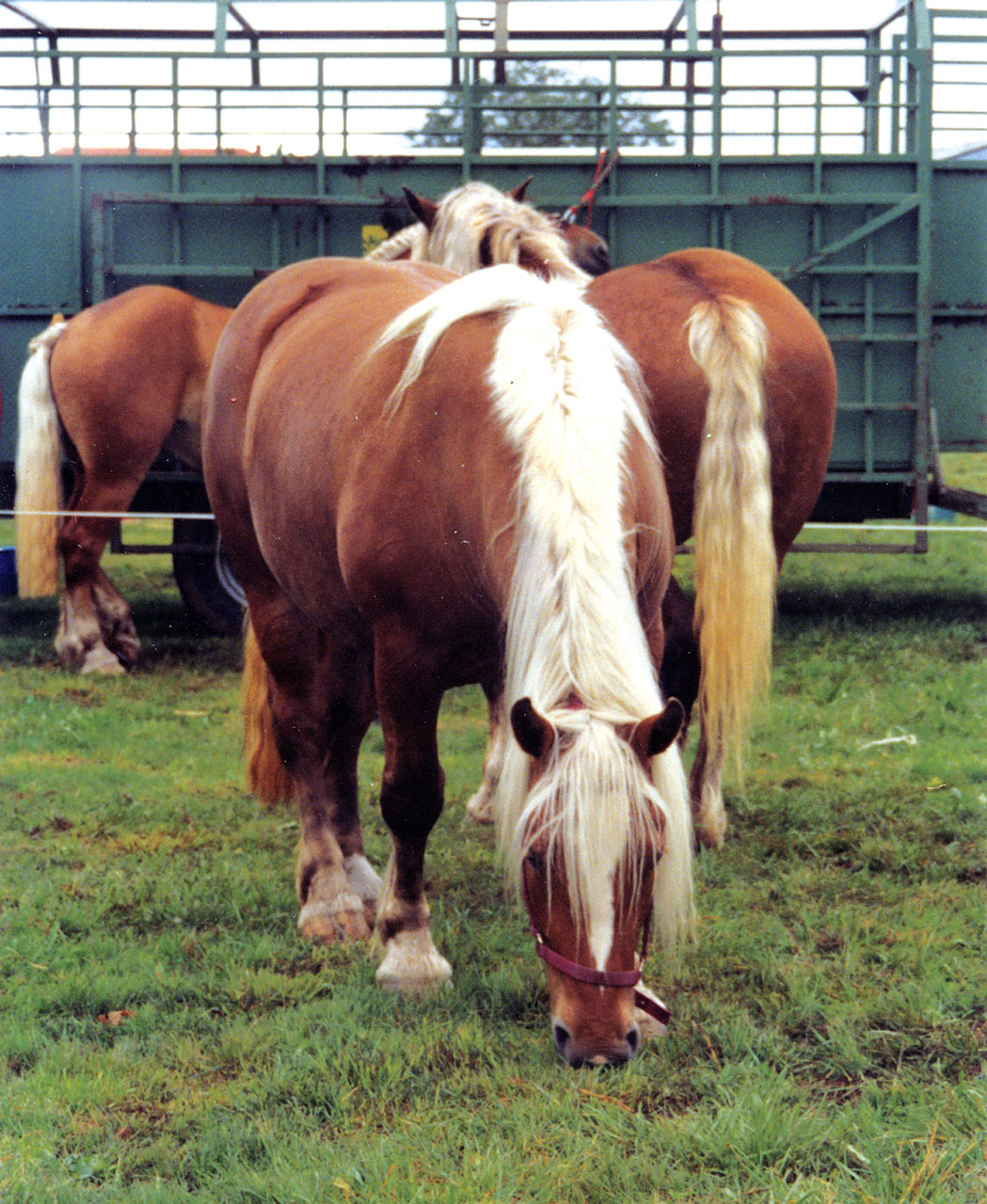 A beautiful example of the breed.

A Gathering of Comtois in France

by Kristina Goetz of Jackson, WY

In August 2004, I once again managed to slip out of the country to return to the splendors of rural France. I had several goals in mind, one of which was to try to get a glimpse into life for the draft horse there.

The origins of many draft breeds lie in Europe: the Belgian of Belgium, the Fresian of the Netherlands, the Haflinger of Italy and the Fjord of Norway, are all European breeds quite popular here in the US, as are several breeds originating on the British Isles like the Suffolk Punch, the Clydesdale, and the Shire. The French specifically have a very long history with horses, and have played a large role in the development of draft horses. France as a single country has itself over 41 breeds, with 10 draft breeds. In a country with over 90 “departments,” or counties, and at least as many cultural identities, it should come as no surprise that there are so many breeds of working horse. These include the Ardennes, Auxois, Boulonnais, Breton, Percheron, Poitevin, Norman Cob, Trait du Nord, and the Comtois. Many of these have been interbred over the ages producing the breeds we know today.

The gathering was teeming with horses.

Before I left the US I tried to do a little homework. Although difficult to determine, it did seem that there may be several strongholds of draft horse use in France. Unfortunately, my schedule and itinerary didn’t allow me to attend any big events. Instead, I had to seek out something that was being held in one of the areas I was already heading. I had the good fortune to then stumble across a listing of draft horse fairs and events throughout the entire country, which proved a gold mine of information. Of course, this gold mine was all in French, and mine is a little lacking. Nonetheless I was soon planning for a stop in the town of Pontelier, the main hub in one corner of the country I had never been to and was bent on exploring: the Franche-Compte. As luck would have it, this region has its very own breed of draft horse, the Comtois. It was to an “exhibition” of this horse that I was heading, although thanks to my lousy French, I was not sure exactly what kind of “exhibition” I was heading to. But, off I went…

The Franche-Compte is the region just north of the Jura Mountains, in the far east of France, on the Swiss border and not far from the Swiss city of Geneva. This area clearly has a Swiss/German influence, in both architecture and dialect, and is a beautiful, picturesque, and seldom-traveled area. Pontelier itself was a charming town, well kept and filled with friendly people and surrounded by outlying areas of lush meadow and grazing cows. Despite its small size and distance from the big city (Paris was several hours away) it had a very progressive feel. It was also host to a magnificently large organic market! Many footpaths and walking opportunities surrounded the town, and the few visitors to the area often come for the walking. I myself made it to the Swiss border on a morning’s jaunt on a well-marked and beautiful desolate country lane. This is a very popular area in winter for cross country skiers, as the rolling hills, thick forests, and magnificent scenery are perfect for the sport. When I arrived in mid-August, the meadow grasses were tall and flowers in bloom. 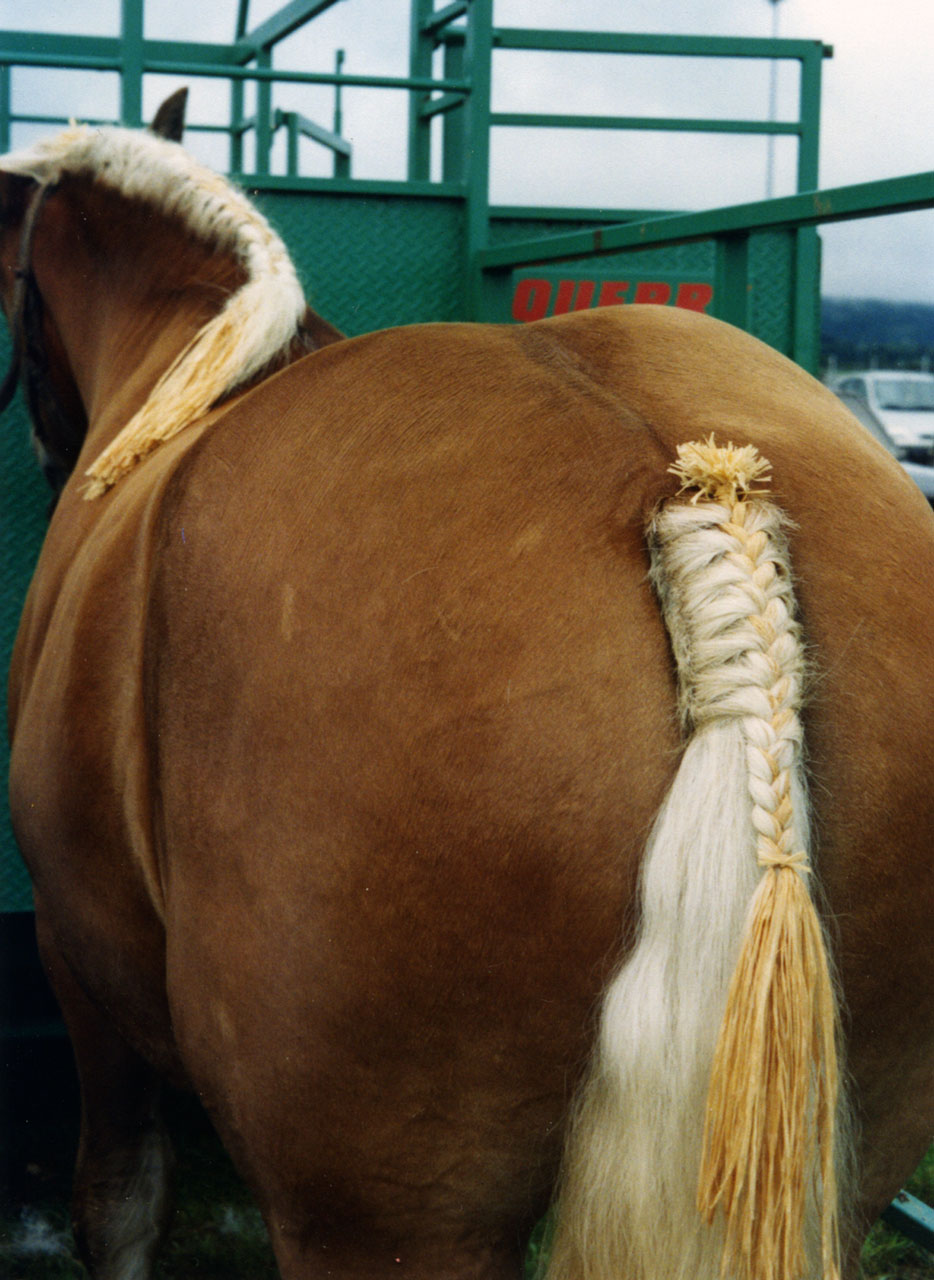 The mane and tail are traditionally braided with straw.

The Franche-Compte is, like many regions in France, very proud of their distinct heritage and unique local flavors. The Comtois, it seems, is a very old breed, perhaps descended from horses brought to the area from northern German immigrants in the fourth century. It is second only to the Breton in numbers in France, and its numbers continue to rise. It is said to be a good-natured, hard working, easy to train horse, with endurance, hardiness, and balance. The Comtois continues to be used for hauling wood from the forest in the Jura, and for working in hilly vineyards. This rural county is also the proud producer to what I found to be another most outstanding accomplishment I must not neglect to mention: it’s own cheese. Compte, with its strict regulations (regarding cows allowed per acre of grass) for production, is the most mild creamy and delicious I came across in all of France, and there was a place right in town where you could tour cheesemaking facilities and gorge yourself on tastings.

But truth be told, upon arrival in this clearly modern town, I was highly skeptical that my sleuthing skills were to pay off. Surely there was no draft horse meet going on here! But after poking around a bit, and with the help of a very kind information clerk, there it was, deep in a long list of Pontelier’s summer events: the working horse exhibition. 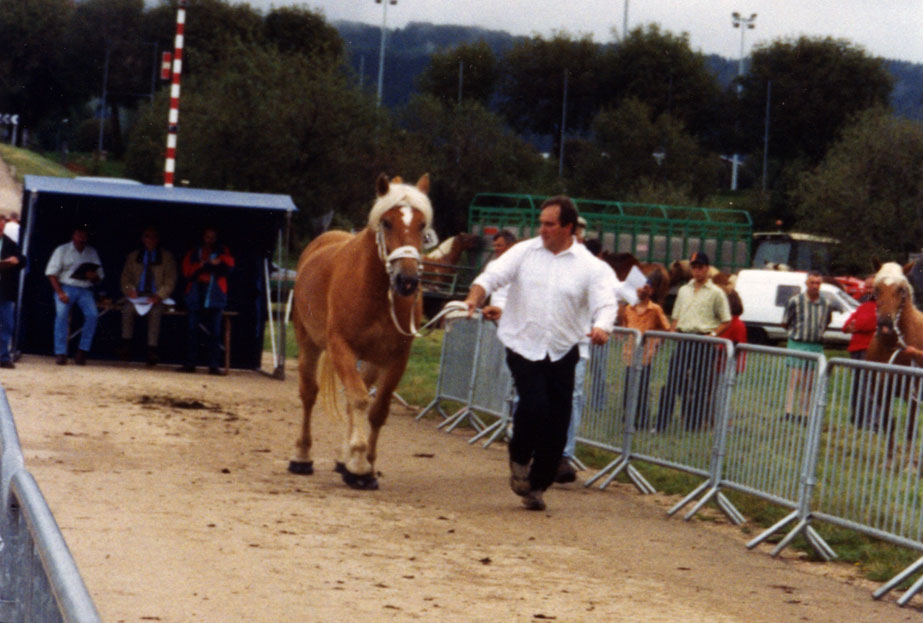 A horse is trotted for the judges.

And so the following morning, a short walk from town to the schoolgrounds led me to a hill overlooking a most lovely sight: a field full of Comtois! Hundreds of these beautiful chestnut workhorses, with flaxen manes and tails, milled about a field filled with spectators. I marched down the drive and into a froth of French-speaking agriculturists, armed with an array of questions in my impressively broken and horrific French.

From the get-go, it was clear this was no plow match or demo; the show was purely for judging each horse’s conformation and gait according to the breed standard. Although I was disappointed not to see them in real action, I was still commending myself on finding the needle in the haystack. Apparently, it seems draft horses for show are more common than in practical use or agricultural matches in France, and so I couldn’t feel too bad. Turns out, this particular meet was an uncommon event and had only been planned to mark the anniversary of the area. The atmosphere was delightfully low-key, the beer flowed, and one could look out over 100 thick rumps gleaming in the sunshine. 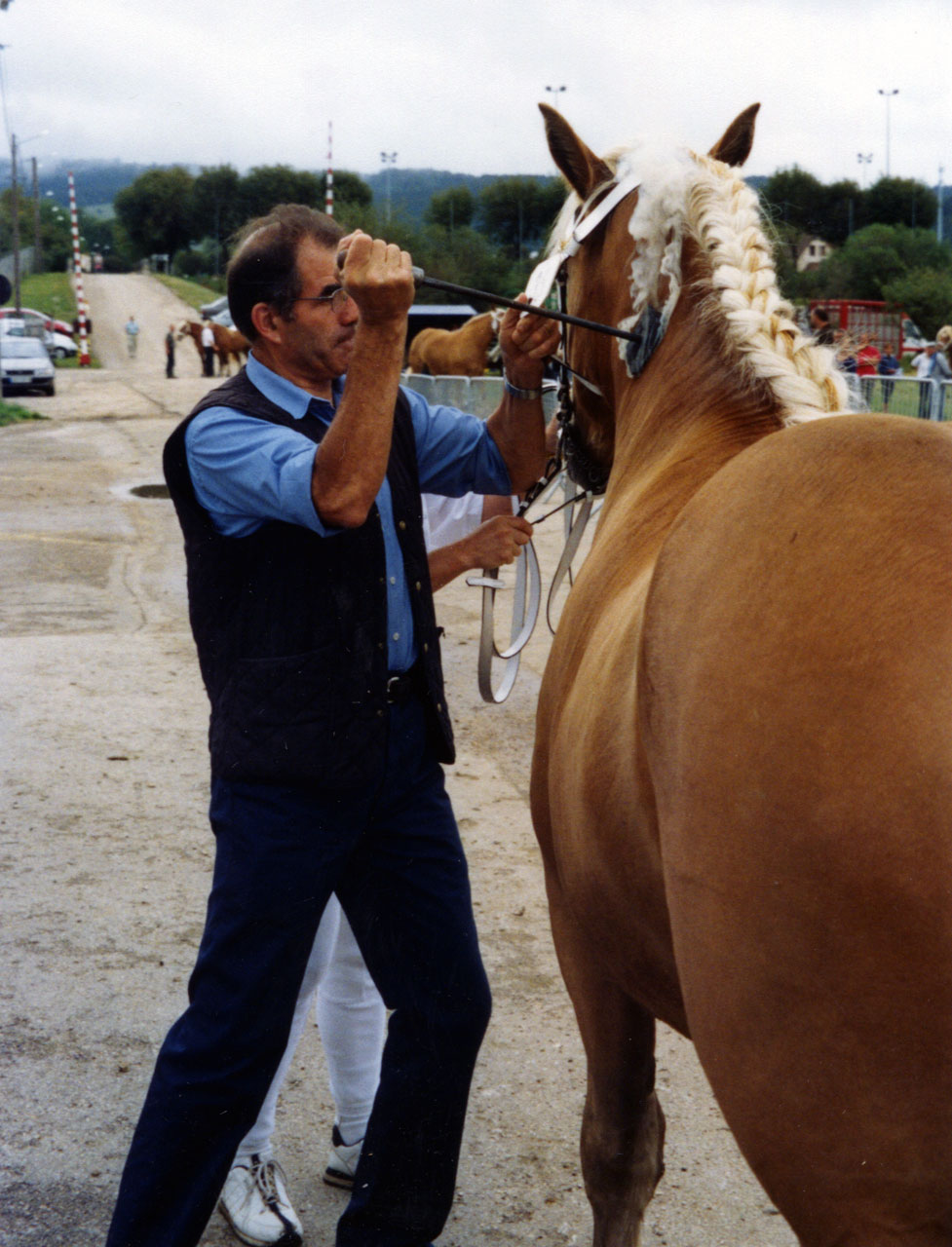 Horses were branded on the spot!

For each horse to be judged, two lanes were set up for the horse to walk, then trot down, led by their handler. Classes were arranged by the horse’s age. All Comtois born in a certain year were given a name that began with the same letter; for instance, yearlings had names that began with M. Two year-olds that were deemed worthy of the breed standard were eligible to be an official Comtois, and were branded with the elegant and historic brand right there after they exited the lane! Tradition also seemed to dictate that the horses manes and tails be braided with straw, and this was indeed a very beautiful and classy touch. Leave it to the French!

Being in such a rural region, nary an English speaker could I find. So, many of my questions were left unanswered. In my travels following, I did hear vaguely of the resurgence of draft horse use by small farmers. I also heard of a group of farmers in the Ariege region who are promoting the use of the draft horse, forming work groups and giving clinics and instruction in using horse drawn farm tools. I heard just enough to keep me wanting to know more. Guess I will have to return once again to this country that prides itself in its small farms and agricultural diversity.