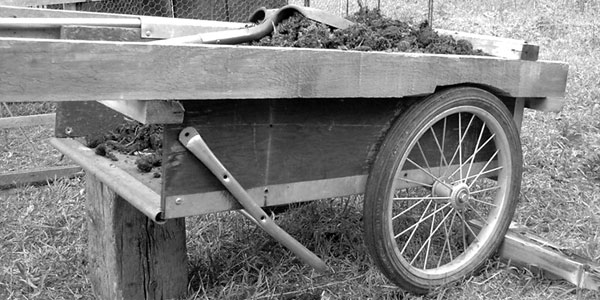 by Jenifer Morrissey of Aguilar, CO

As a kid I spent a lot of time on the business end of a garden cart. (At least it seemed like a lot of time!) In the lushness of the Willamette Valley of Oregon where we lived, there was always brush to haul or sawdust to spread or weeds to add to the compost pile. To make it fun I often imagined myself a horse pushing into the load, swinging my pony tail when the going got tough. While we had a metal V-shaped cart with small wheels, the really effective tool was a wooden cart with large spoked wheels and pneumatic tires. My catalogs today call this style of cart a Vermont Garden Cart.

My experience as a child undoubtedly helped me solve a dilemma I faced late last winter. Our compost bins no longer had room for all the pony manure my equine friends were generating. For a few days I used a wheelbarrow to move the day’s haul out to the pastures for spreading, but the chore quickly got old, especially when there was snow on the ground. I knew the manure needed to go out to the land. The question was how to move it and keep the task enjoyable enough that I’d do it as regularly as it needed to be done.

My first solution was to use the old stone boat with my pony Mya. For a few weeks, this solution worked well. However, our warm, dry winter here in Southern Colorado caused the ground to thaw early, and it soon became clear to me that the stone boat was too hard on the land. I needed a different solution.

One of the challenges I constantly face using draft ponies is finding appropriately sized equipment. Mya is a Shetland-Welsh cross, standing at 11.2 hands. Most manure spreaders are big and heavy and require a team of horses. Even pony-sized manure spreaders are often sized for teams. With only one pony currently harness-ready, I needed something small and light and preferably wheeled to minimize impact to the land. We soon proved the wisdom of the old adage, “Necessity is the mother of invention.” My husband and I looked around our budding small farm for something light, wheeled, cheap, and available, and we quickly noticed our Vermont-style garden cart.

Tom easily saw how he could build shafts, yet keep the garden cart human- usable. I paged through my workhorse books to figure out the harness connections. Soon we had an approach we thought would work. The shaft assembly is built of 2×4 lumber, with cross-pieces that pull the cart from behind, lift the cart handle, and serve as a singletree. It’s designed to be quickly and easily removed to return the cart to its normal function. Using Lynn Miller’s Work Horse Handbook and Midwest Leather’s catalog, I learned how to modify the team harness I had for Mya, adding a cushion and large loops fashioned from hame straps to her back pad. I also added line keepers.

To our knowledge, Mya had never been in shafts before, so before we hitched her to the cart with shafts, we used the shaft assembly as a travois. I’ve been told that ponies are natural pullers (pushers is actually more accurate), and Mya’s willingness to try anything makes it possible to experiment. It only took Mya a few minutes to be comfortable with the travois, so we put the shafts on the cart and hitched her up. As it turned out, she seemed more confident with the cart than the travois and we were soon off driving about the farm and even moved a little manure that first day. I was ecstatic. Previously Mya’s and my work had been limited to skidding and pulling the stone boat. Now a whole range of possibilities was open to us as a team using a wheeled vehicle.

After a few simple trips just hauling manure, we were soon back-hauling loads. Out would go a load of manure and back would come a load of firewood or a hay bale. Because of the drought this summer, we’re also hauling water, and we’ve even hauled railroad ties, tee-posts, and other fencing supplies. The nature of the cart means I walk as much as Mya does, but some days at the end of our work session, I’ve been known to squat in the cart and get a ride back to the barnyard. A friend loaned us a training cart, and Mya took to it as easily as she did the garden cart, and after work trips I sometimes take her out for a joy ride. It’s been a marvelous journey of discovery. It isn’t too much of a stretch to say that the garden cart has transformed Mya’s and my relationship. She seems to like the regular work, and I love the help and companionship doing chores.

Because a few friends have ponies and garden carts about, we’ve taken several pictures of the cart assembly. As I get my other larger ponies going in harness, I look forward to maybe someday having a manure spreader and a forecart so I don’t have to do so much walking. Until then, though, Mya helps me keep the manure from piling up and lets me do other hauling that specialized equipment wouldn’t allow.