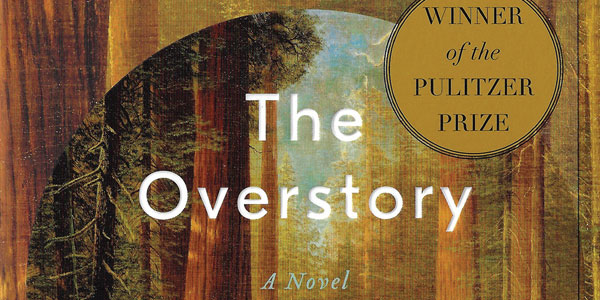 A Species to Look Up To

A Species to Look Up To

a book review of The Overstory by Richard Powers
by Paul Hunter of Seattle, WA

For a couple years now I have been looking for new ways of telling the stories of nature’s interaction with humans. What started me was the urgent, and perhaps despairing suggestion of Paul Kingsnorth, in his book Confessions of a Recovering Environmentalist (Graywolf Press, 2017, reviewed in SFJ, vol. 41, no. 3, p. 22-26), that we have been failing to address environmental concerns because we have been telling ourselves the wrong stories. The one I immediately thought of was the Garden of Eden in Genesis, where Adam and Eve are given dominion over all the other creatures. They could name them, and use them, but need not respect both their kinship and differences from us, enough to just let them be. Even the serpent who tempts them is no reptile, but a fallen angel in a snakeskin disguise.

Now at last may have come a work of fiction that explores new ground in the interactions of humans and nature, in this case trees — The Overstory, by Richard Powers (W. W. Norton, 502 pp., 2018). It begins with what seem to be eight unrelated stories that introduce a cast of characters who soon awaken the reader to the notion that all these people, like most of us, have trees in their lives and doings, and have been changed thereby. Among them we meet a skinny computer programming genius who falls out of a live oak, becomes wheelchair-bound, but then creates alternative gaming realities that are challenging and addictive. We visit a tech sergeant in Vietnam who is shot down and caught by a giant fig tree with 300 main trunks. We follow a homely girl educated by her father who is an ag extension agent in Ohio, who says, “Nothing is less isolated or more social than a tree.” The trees in their lives lead to intimate and unlikely unions, careers, consequences. But then the book widens out beyond those stories, to involve the shape and functions of the tree family, in chapters called: “Roots,” “Trunk,” “Crown” and “Seeds.” In that widening overstory we revisit the cast of human characters and their interactions, and what meaning trees play in their lives.

Richard Powers has done his homework, and the book gives us visits and sojourns with trees that are as real as he can make them. There is something stirring and elemental in approaching these life forms, that are theoretically immortal as long as their habitat is undisturbed, their bark unbroken. The stories begin with the chestnut blight of last century, where one of that species survives because it was planted in northwestern Iowa by an early settler. The blight by 1940 would eventually erase four billion trees, that had fed and housed humans since their first forays into North American forests.

What the trees offer humans are gentle and wordless lessons of living, coupled with the abundant riches of dying, couched in ways we should be able to understand. Consider this analogy, describing a troubled teenager:

Adam watches the precarious boy, fascinated. A seed that lands upside down in the ground will wheel—root and stem—in great U-turns until it rights itself. But a human child can know it’s pointed wrong and still consider the direction worth a try. (p. 58)

Maybe it’s a consequence of human helplessness due to its oversized empty head promoting too early a birth, but there are a hundred such touches in the novel that hint at broken connections to an older wisdom that might benefit humans.

But the trees in the book don’t just function by analogy. Trees form the calendar of seasons, the backdrop, foreground and fertile topsoil for most of Earth’s other lives. And realistically, trees are a serious player in the problem of climate change. In the United States trees sequester 11% of yearly atmospheric carbon. Which is substantial, but due to clearcutting not nearly enough in the recent past, nor what it used to be. We know that old trees sequester more carbon than young trees do, and do a better job of cleaning and cooling the atmosphere. But we need many more old trees, or else fewer airplanes, factories, trucks and cars that run on fossil fuel.

The interwoven human stories in the book hold many surprises, with unlikely heroes and distressingly ordinary villains. I will try not to spill the beans, but the most memorable story for me is a newly met couple who join some environmental activists, and are talked into climbing up into the canopy of an old-growth tree, to halt the clear-cutting of an ancient forest. Expecting to only be up there for four or five days, they are both alarmed and slowly charmed to be marooned 220 feet above the forest floor for a stay that stretches a year, when the beleaguered activists can’t find anyone to replace them. Meanwhile all the trees around the old giant are felled and logged. The couple become more acclimated to their swaying perch in the overstory, that supplies them with food to be gathered, soil to be gardened in the crotches of limbs, even flying squirrels that seek them out for the warmth on cold nights.

One of Richard Powers’ most telling techniques is to let his characters discover that forest world for themselves, then express their wonder. After his death, a widow reads in her husband’s diary:

No one sees trees. We see fruit, we see nuts, we see wood, we see shade. We see ornaments or pretty fall foliage. Obstacles blocking the road or wrecking the ski slope. Dark, threatening places that must be cleared. We see branches about to crush our roof. We see a cash crop. But trees—trees are invisible. (p. 423)

The widow then surprises us as she tries to turn the forest story on its head, and go beyond her husband’s notes:

How fine it would be if we could learn who they are, when they’re at their best. This is not our world with trees in it. It’s a world of trees, where humans have just arrived. (p. 424)

There is a freshness and vigor to the knowledge woven through this novel, and the characters share infectious points of view. The science and lore of trees has recently been expanding dramatically. By now the largest single organism on earth is no longer seen as the blue whale, nor even the Sequoia or Redwood, but the quaking aspen grove, which sends up shoots from its runners that seem to be separate trees but are not — scouts and messengers from a complex root system that function as a single organism that may stretch over hillsides, in some cases dozens of square miles. The aspen grove can send messages, shift nutrients and other resources from one part to another, study its environment, organize its own growth and repair injuries to itself.

If we are to survive as a gathering of species sharing for such a long time this one home, in times to come when speaking of our character we may want to openly speak of our forests and woods. What better way to examine our underpinnings, our nests and roosts, than to describe and delve into the nature of our trees. Self-planted trees have a vastly larger rooting than those that humans plant for profit. A tree needs to take hold, find its footing on its own and with kindred, stand up for itself, and reach for its place in the canopy. In Old English the word tree and the word true are cognates, with meaning flowing both ways. In my own younger days I saw woods as an endless competition for sunlight, water and nutrients, which is belied by more recent science that can measure their interplay. There is vastly more cooperation in a forest than meets the eye. Richard Powers’ novel may lend both tree-huggers and tree-butchers enough common ground to lift our tree-climbing species above its short-sighted plundering of these lives that in many ways still overreach and outspread us, timeless for all they seem fixed in place. Offering a new and challenging view of the world, The Overstory is the most hopeful fiction I have read in years.