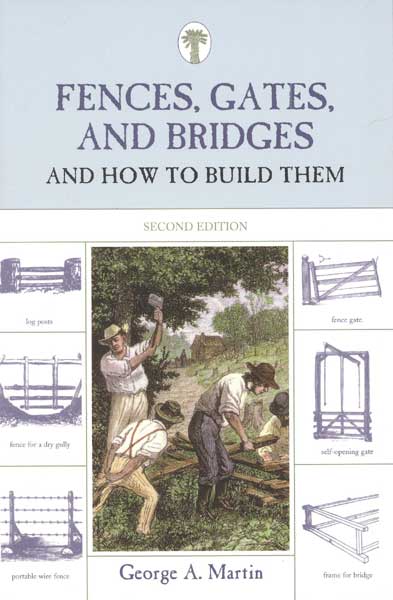 Barbed Wire. We have been working with it quite a bit on our own ranch, recently. Fixing fence is a constant chore, as we fight the elements and the animals (cows that want out and elk that want in), replacing the broken, twisted, rotten, and rusted wires on an almost daily basis. It reminded me of this post of some months ago on the history of barbed wire from Fences, Gates, and Bridges; and as it is still of interest to me, I thought some of our readers might benefit from it as well. – SGM

First published in 1900, Fences, Gates, and Bridges is a manual to practical methods of constructing all-weather fences, gates, and bridges. This second edition, rife with wonderful illustrations and informative graphs and tables, is the perfect pocket guide to classic American ingenuity. Below are illustrations of different varieties of barb wire and an excerpt on the invention of the barb wire fence.

The invention of barb wire was the most important event in the solution of the fence problem. The question of providing fencing material had become serious, even in the timbered portions of the country, while the great prairie region was almost wholly without resource, save the slow and expensive process of hedging. At this juncture came barb wire, which was at once seen to make a cheap, effective, and durable fence, rapidly built and easily moved. The original patent for barbed wire was taken out in 1868, but it was not until six years later than an attempt was made to introduce it into general use, and more than ten years elapsed before the industry attained any considerable magnitude. The rapidity and extent of its subsequent growth will be seen by the following table, showing the estimated amount of barbed wire manufactured and in use during the years named, the estimated length being in miles of single strand:

Barb wire of nearly, if not quite all the popular kinds, is shipped from the factory on strong spools, each holding one hundred pounds in weight, or eighty rods in length. These spools are bored through the center to admit a stick or bar, which can be used as an axle in unreeling the wire. The following table shows the weight of wire required for fencing the respective areas named: 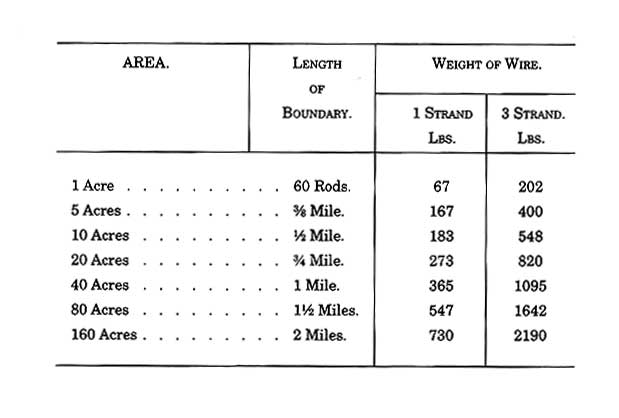 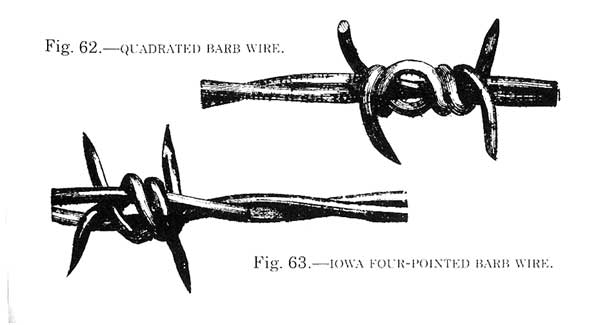