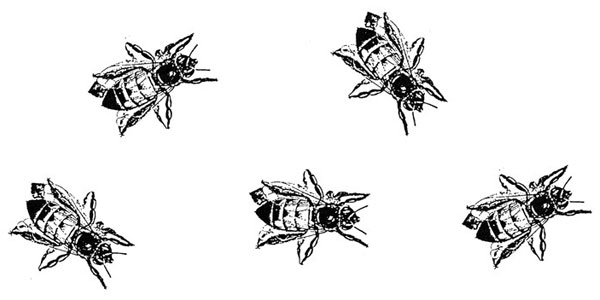 Bees in Our Cellar

Bees in Our Cellar

Our hillside cellar was dug in the late 1880’s and is still in good shape today. An entry-way with double doors creates some dead air space between the cellar and the outside environment, making excellent insulation. It’s a big cellar, and several of our neighbors have used it for storing apples, potatoes, onions, etc. But one year some adventuresome wild bees decided to make their nest between the double doors, creating a major obstacle for anyone trying to go in or out.

Our first encounter with the bees was when my younger sister, Heidi, went up to the cellar one spring day to get some potatoes for dinner. She took our young son, Michael (age 2) along to help bring back the potatoes. But they didn’t get any potatoes.

The heavy outer door had a habit of sticking, and Heidi gave it a big kick to get it open. The bees’ nest was near the ceiling, right behind the door. As the door pushed open, it hit the nest and tore it. Out poured an angry swarm of bees, engulfing Heidi and little Michael in a buzzing brown cloud. They ran back toward the house, Heidi swatting bees and wringing them out of her long hair.

We heard them yelling and rushed outside to see what was the matter. Heidi have several stings on her face, but Michael seemed to have come through unscathed, until a few minutes later when he tugged urgently on daddy’s pants leg and pointed inside his own little coveralls. One errant bee was buzzing around inside Michael’s coveralls. But we managed to rescue the bee (and Michael) without further damage, by dropping the overalls down around his diaper and letting the bee fly away.

Our minister’s family stored their yearly supply of potatoes in our cellar, but we didn’t have a chance to tell them about the bees. We were gone from home the next day when Rev. Ted Cox and his wife, Ruth Ann, drove out to the ranch to get some potatoes. Ted went into the cellar to bring out a sackful, while Ruth Ann waited in the car.

Like Heidi, he gave a good shove on the stubborn outer door, which jarred the bees’ nest. But Ted had gone through the door before the bees came swarming out. He was inside the cellar and the bees were madly buzzing between him and freedom; there was no way to get back out! So he waited, hoping they would settle down and go back to their nest. He sat in the darkness sorting potatoes … and sorting potatoes. Finally he had sorted all the potatoes and Ruth Ann was wondering what was taking him so long.

At last he gave up on waiting out the bees. Rummaging around in the dank and musty cellar, he found two empty potato sacks. Putting them double over his head and shoulders as protection against the angry bees, he slowly and cautiously crawled out of the cellar, keeping a very low profile – and nearly frightened Ruth Ann to death when she saw that strange apparition creeping out through the cellar door! He didn’t bring any potatoes. They went home empty-handed.

We all had a good laugh when he told us later about his ingenious escape from the cellar, and we wasted no more time in contacting our local bee man to help us with our bee problem. We didn’t want any more of our unsuspecting neighbors to be trapped in the cellar. Especially since there weren’t any more old empty potato sacks left!