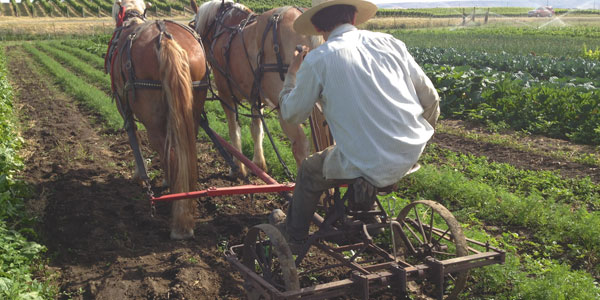 Between Ourselves and Our Land: Horsepowered Root Digger

Between Ourselves and Our Land: Horsepowered Root Digger

One of the things that drew me to farming with horses is the endless possibility for creating new equipment that is easy to understand and manufacture because of the simple mechanics. This year, I set out to make a new implement. Drawing from my experiences on a tractor-powered farm in California and some advice from Teague and Kosma, mule-powered farmers in Twisp, WA, and Jason Salvo, a tractor-powered farmer in Duvall, WA, I decided to build a horsepowered root digger, known to some as a bed lifter. I hoped that not only would it provide us with another job to use the horses in which we had been previously using hand tools, but it would make these digging jobs faster and more efficient.

At Huasna Valley Farm in central California, we used a roughly 70hp tractor to lift 3-line beds of garlic and 4-line beds of carrots. The metal blade, approximately 4.5 feet wide, was sunk into the soil at the beginning of our raised beds, which were 5 feet on center. Several employees would gather on the top of the blade attachment and stand on it while the owner would drive the tractor forward. The carrots, dug weekly, were severed from their tap root and left in the soil ready to pull easily. Quickly the crew riding the attachment would put them into harvest totes and take them back to the wash station for bunching. The garlic was similarly dug, which made pulling them up for curing much easier.

In the North-central Washington town of Twisp, brothers Teague and Kosma farm with mules and use a root digger bar pulled behind a forecart. When I visited the farm last winter, I saw their root digger parked and it sparked my interest to build one at Welcome Table Farm here in Walla Walla. Then this spring at the Small Farmer’s Journal auction, they looked over options in the field with me, and we found a two-wheeled, two-horse implement set up as a bed lister. When we looked it up in Lynn Miller’s Horsedrawn Tillage Tools, we found it looked most like the Planet Junior No. 41 Orchard and Universal Cultivator.

The Planet Jr. cultivator came with three middlebreaker plows on the back tool bar, the clamps of which would hold flat stock steel with two nuts and bolts. The two levers on the implement are used to adjust the tongue angle and to raise and lower the tool bar. After adding the tongue, double tree and neck yoke, which did not come with it at auction, we tested the implement. Before creating the root digger, we furrowed trenches to plant winter squash, tomatoes and other single line row crops. As long as the horses were walking straight that day, we were happy with the results.

The benefit (and flaw) to this cultivator, as compared to springs on the more common McCormick-Deering and John Deere straddle row cultivators, is that the tool bar is held down with the lever only, so that the tool bar becomes difficult to bring down once your tool, in this case the root digger, hits the soil. Once in the soil, this Planet Jr. cultivator doesn’t have the give of the spring-loaded gangs and the tool stays in deep, nor does it have foot pedals to help steer the implement.

Once we tested the cultivator with the bed furrowing attachment, I spent some time in the shop manufacturing the root digger. I used 2 feet of ½” x 1 ½” flat stock steel for each side arm of the digger, with a 17” x ?” x 2” piece of hardened steel for the actual digging blade. I sharpened the lower half of the arms and the digger blade to a rough edge and welded the digging blade at a 45 degree angle to the arms to create a suction as the blade is drug underground. The two arms are clamped onto the cultivator’s toolbar, and can be adjusted for depth in the soil by raising or lowering the arms of the digger bar.

Our first trial for the root digger was on green garlic. The field was virtually weed-free, and in our softer, lighter ground. With the digger’s arms set as deep as possible, we managed to get the bar 11-12” underground. It lifted the garlic up easily, and was a moderate pull for the team. This year, we started planting more crops into 1 and 2-line beds on 36” center, for ease of planting, cultivation, and as we had hoped, for harvest as well. We hoped to gain the efficiency of more horse powered work in the growing of these crops, but still planted 2-line beds, instead of all 1-line row crops, to maximize our limited field space of 6 acres.

Later this summer, we began digging carrots for our CSA, farmer’s market and restaurants. The early ‘Mokum’ carrots were only 6” long at the time, but the ground was in our heavier soil. With the digger bar set as deep as possible, we found that it would occasionally ride on the plowpan, and bounce up to slice the bottoms of the carrots. We utilized the weight of farmers on each side of the tool bar to keep the root digger consistently deep, with success.

As of September, we’ve dug carrots twice weekly for 3 months now, under various conditions of moisture, soil makeup, and weed pressure, we’ve learned that having weed-free paths is very important for a successful lifting experience. Field bindweed, one of our worst weeds, and larger broad-leaf weeds would clog the digger arms, causing it to lift and tilt to one side, slicing some of the carrots until we could stop the team. As long as the paths were kept fairly clean, the digger worked well. Even if the inner-bed had weeds, annual or perennial, the blade would simply lift or slice them along with the crop, so they were not a problem. Another factor in a clean digging experience was the compaction of the paths. If we had run our more aggressive one-horse walk-behind cultivator recently, rather than our beet knives on our straddle row cultivator, it was easier to sink the digger bar to the desired depth.

Our other trials were digging the garlic heads for curing and lifting roots from already harvested brassica crops. The garlic lifting was moderately successful — moderate mostly because we dealt with fairly weedy paths, so that we had to clear the tool bar arms every 100 feet or so. Luckily the garlic did not require the blade to be deep like carrots and it was in our softer ground, so with one rider on the toolbar, we were able to lift the garlic up to cure and store. I am not sure how well it will work in heavier or more compacted ground. It may require some aggressive cultivation or a subsoiler up the paths before lifting. The brassica lifting worked some of the times we tried it. Depending on the compaction and moisture levels of the soil and length of the crop in the ground, the bar would sometimes stay under the roots to lift them, but sometimes it became clogged and lifted out of the ground. We anticipate using this regularly once we are able to dial in the settings, so we can remove the woody plant material for quick field turnaround and feed the plants to our livestock.

Overall we are very pleased with our new implement, for its furrowing attachment and for the root digger. The cultivator we purchased had definitely seen some use, as it had one weld joint made and some pieces slightly bent when we bought it. One improvement we hope to make in the future includes improving the efficacy and angles of the levers, as the leverage is lacking for the driver to gracefully sink the digger bar into the ground, and the levers nearly touch as they pass by each other. Once the angle of the tool bar is set, we have to set the horses forward with the lines in one hand while using the other hand to pull back on the other lever to sink the bar. Once in the soil, it is difficult for some to pull the lever all the way to the deepest setting. Also, the implement would be more ideal if it did not require riders, as it can be precarious for them if the teamster needs to make a stop quickly.

A root digger/bed lifter could be a very useful tool for draft-powered vegetable growers to effectively and efficiently lift and harvest roots. For now, though, we may have to rely on our homemade versions.