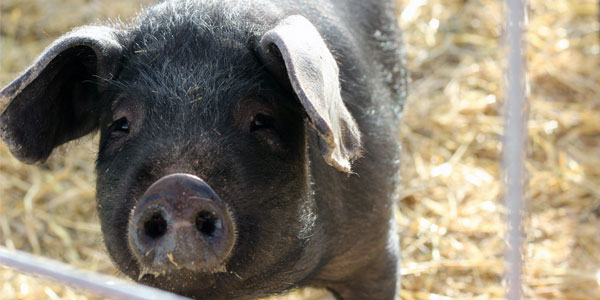 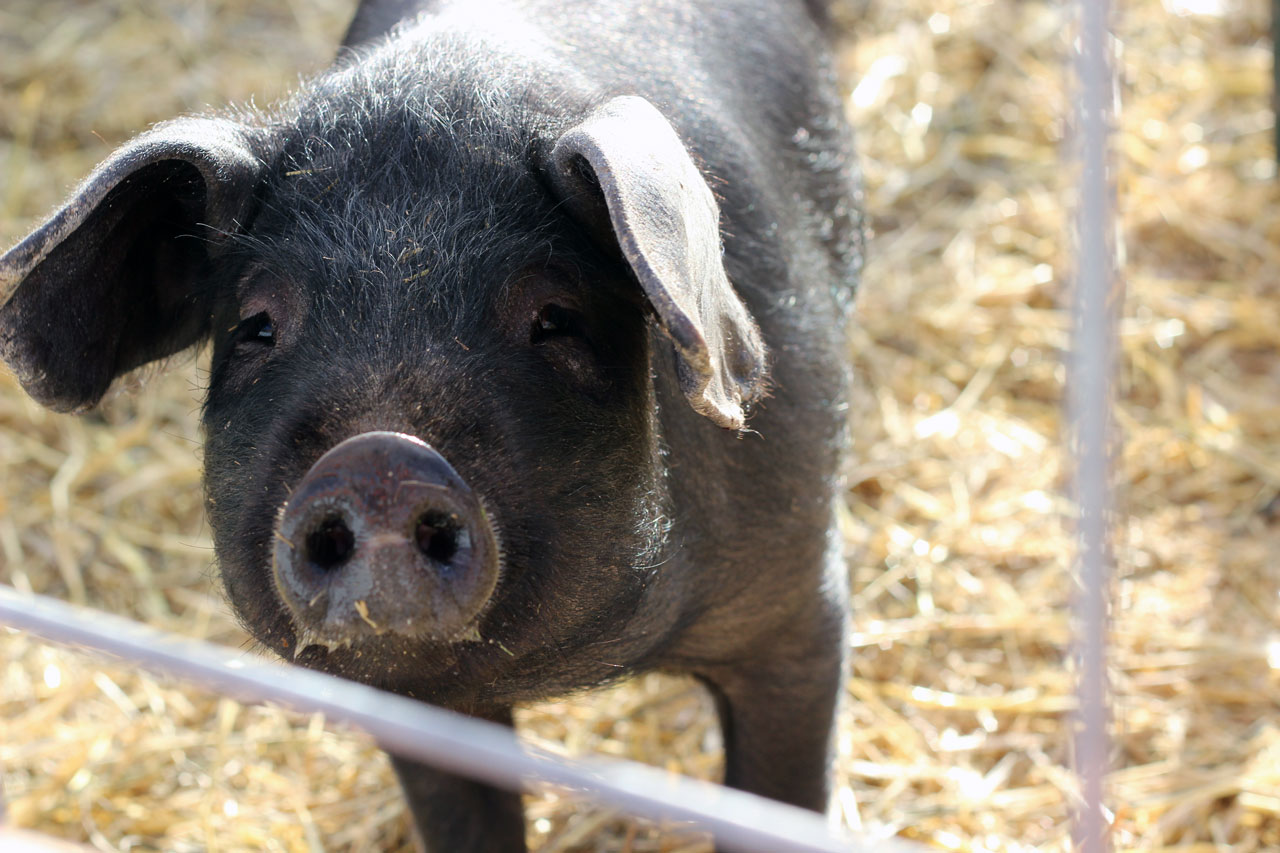 Working on a pot of baked beans last fall I felt a familiar disappointment with the requisite bacon. For years I’ve skimped on pork. Too many reservations about tight cubicles crammed with highly specialized incompetent pantywaist psycho pigs given pellets and antibiotics by gowned workers. The whole scenario was disturbing enough that I pretty much gave up on pork products with the exception of a little bacon for flavor now and then. But I kept tendering a determined distant hope of figuring out a better way.

Twice we bought fair pigs. Each was a disaster — so much fat we could hardly find the meat. This puzzled me because I’d read somewhere that modern pigs are typically so lean they may even be missing some flavor. But the 4H program rewards kids on one measure — pure poundage. And competing for the heaviest animal in the shortest time leads young farmers to the bakery where they stock up on old Wonder Bread and Twinkies. So in retrospect the lousy meat had an explanation.

Still, I wasn’t quite ready to raise my own. Hadn’t laid out a dedicated pigpen with shelter and water, nor had I found a good feed source. Because I was reluctant to have any meadowland uprooted and turned into dirt, I figured pigs would need perpetual strict confinement. And I was doubtful too about finding any decently hardy pre-industrial hogs for sale here in the hinterlands of Idaho. A farmer in Maine mentioned that she had traveled to Missouri to pick up her heritage sow.

But the Jacob’s Cattle beans wouldn’t let me alone, so I slowly worked through the contingencies. And when I finally truly rooted around in the swine literature I learned that some breeds are preferential grazers. Given enough space and adequate grass they leave the soil alone. For me that was the critical revelation, because without enough summer rains in our high valley to reliably establish new seed, I’m a little obsessed with maintaining intact sod. I don’t need any more digging beyond what the ground squirrels and badgers already do. And a pig that would take a fair portion of its forage from grass sounded like a step in the right nutritional direction. 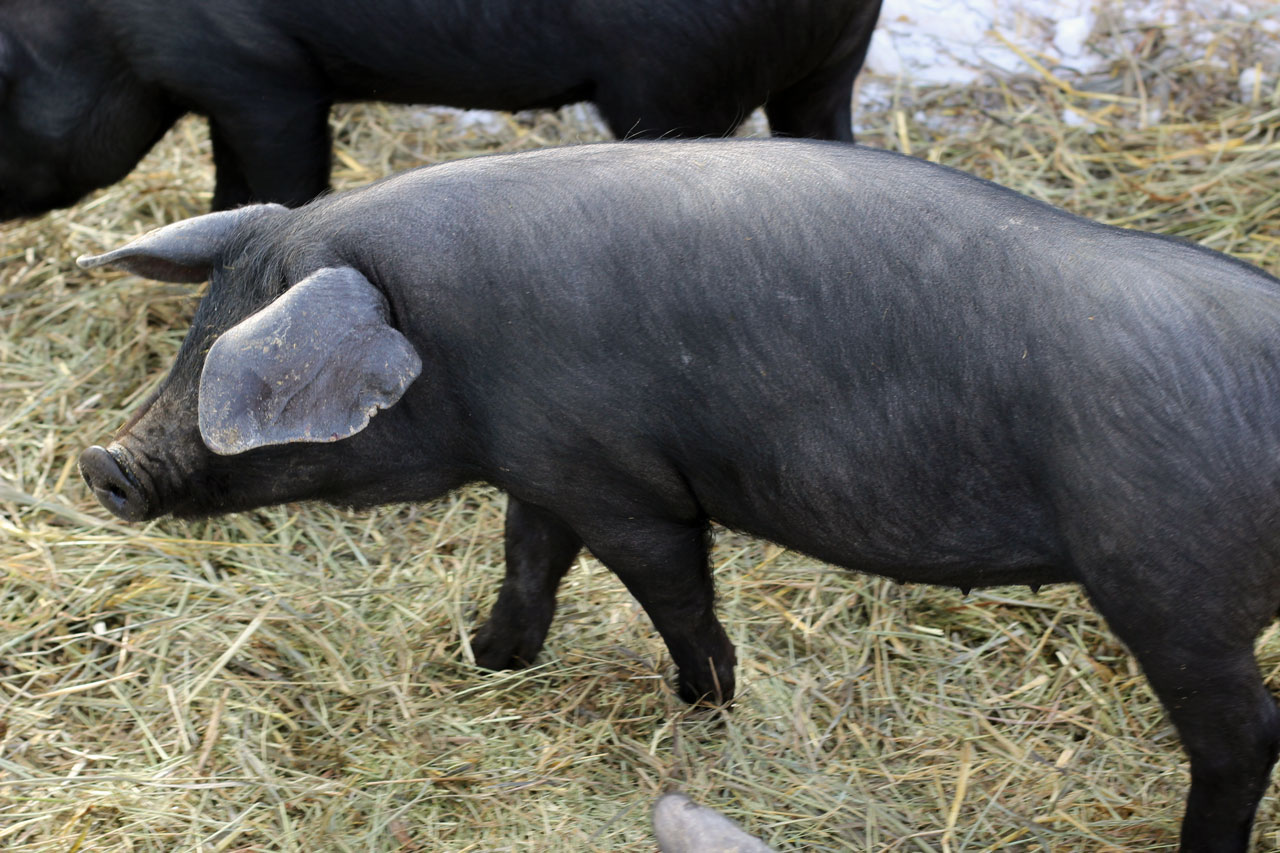 So we found a few Large Black pigs. These long-eared, long-bodied hogs are a relatively rare breed from SW England. Although in 1900 they were one of the most numerous of the English pigs, they eventually became critically endangered. Apparently after WWII when most American hogs were moved indoors the Large Blacks chafed in confinement. Uninterested in becoming city pigs they refused to cooperate. And they matured slower than some modern breeds. So they were marginalized and almost disappeared.

But as country pigs go the Large Blacks are superb. They are true grazing pigs, thriving on grass and respectful of fences. Protected from sunburn by their dark skin and hair they are tolerant of heat and cold and do well even in rugged conditions. Having retained valuable instincts, the sows are naturally careful, dedicated, and able mothers. The boars I’ve seen are friendly and docile. Litters tend to be large and the pigs are known for longevity.

Next to dogs, they are the most exuberant and self-confident animals on our farm, certainly the most vocal. They love their people and aren’t shy with strangers. Hearing footsteps or a noisy bucket they pile out of their snuggly straw nests and come running. And when the food is dropped they dive in with ambitious gusto, making winter feedings a true pleasure for both farmer and pig. Lately I’ve wondered many times why I waited so long to get them.

Eventually, as the biggest pig matured we scheduled a date with our friend Wes, who also happens to be a mobile butcher. He arrived late one winter afternoon. To make the job cleaner we had withheld food for 24 hours, which seemed like a long time for a pig’s growling stomach. As the pig snorted and happily buried his nose in the bucket to break his fast, Wes placed a single shot to the head and in one quick continuous motion handed me his gun, jumped over the fence, and plunged a long knife deep into the heart. Hot blood found the snow. We pulled out the small bowel into a bucket.

That night we rinsed the casings, turning them inside out and sliding them into salt water to soak. The next day I scraped off the mucosal layer, leaving the collagen underneath. The peach-pink ropy casings got salted again and packed in the fridge to await sausage making. 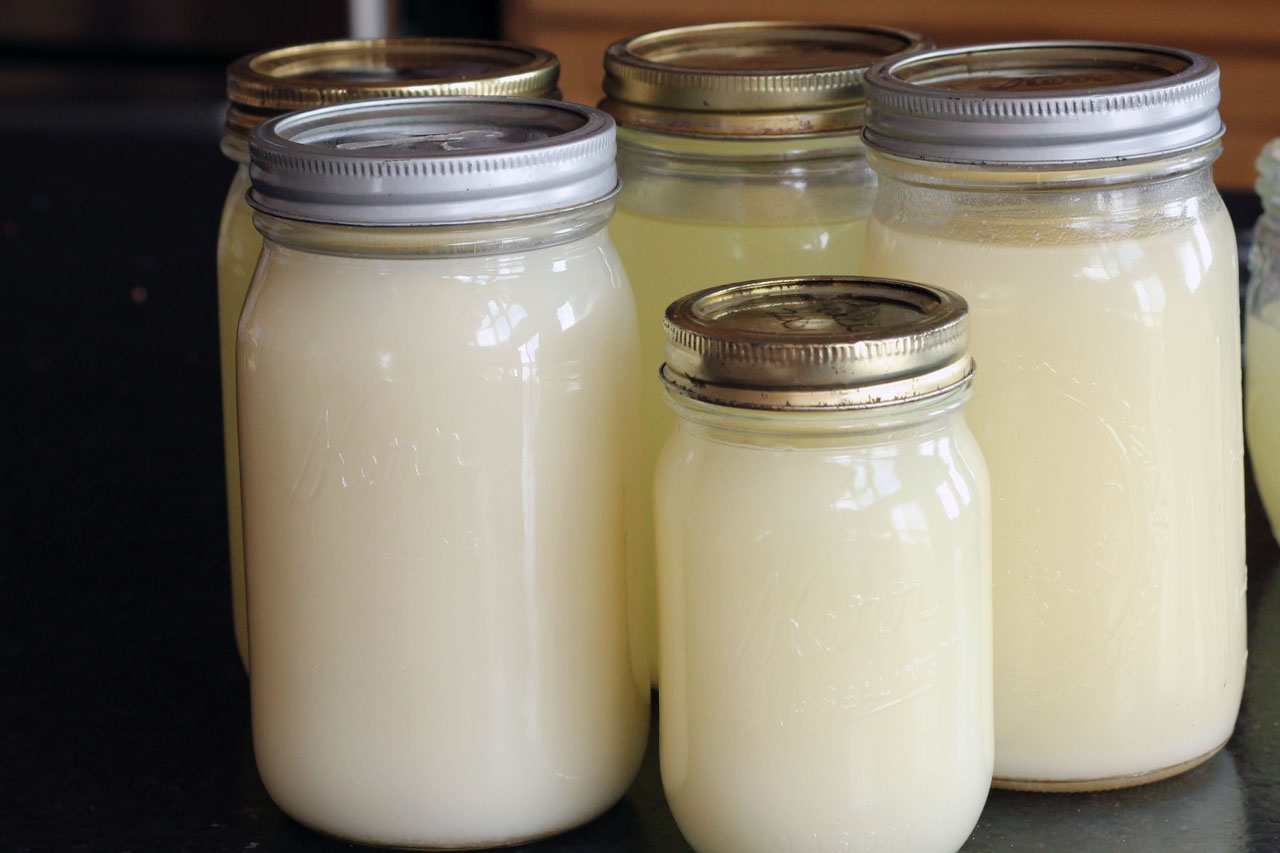 Wes ran the fat once through his grinder and set it aside in all its glistening slippery white glory. From there the rendering was simple, requiring only gentle heating in the oven, then pouring though cheesecloth into mason jars. We got just a titch under five quarts of beautiful creamy lard . I thought of giving a couple of pints next Christmas, but must make sure we have enough first.

Unlike the dry cardboard texture and minimal flavor of most modern pork, this was a whole different animal. It seemed the contrast was even more dramatic than that between home grown beef and its alternative. The thick chops easily sliced with one or two passes of a straight knife and minimal pressure — none of the usual hacking and sawing with a serrated instrument. And the cut edges were clean and straight instead of ragged. Juices dripped. The marbled rose-tinged meat had a rich earthy flavor we had never tasted before, generating comments like “wow, I think pork is my favorite meat!”

With the bacon curing it will soon be time to soak some Jacob’s Cattle beans and bake them, bringing us full circle. It was, after all, a craving for those wicked good beans that finally plunged us into this rewarding and overdue endeavor. 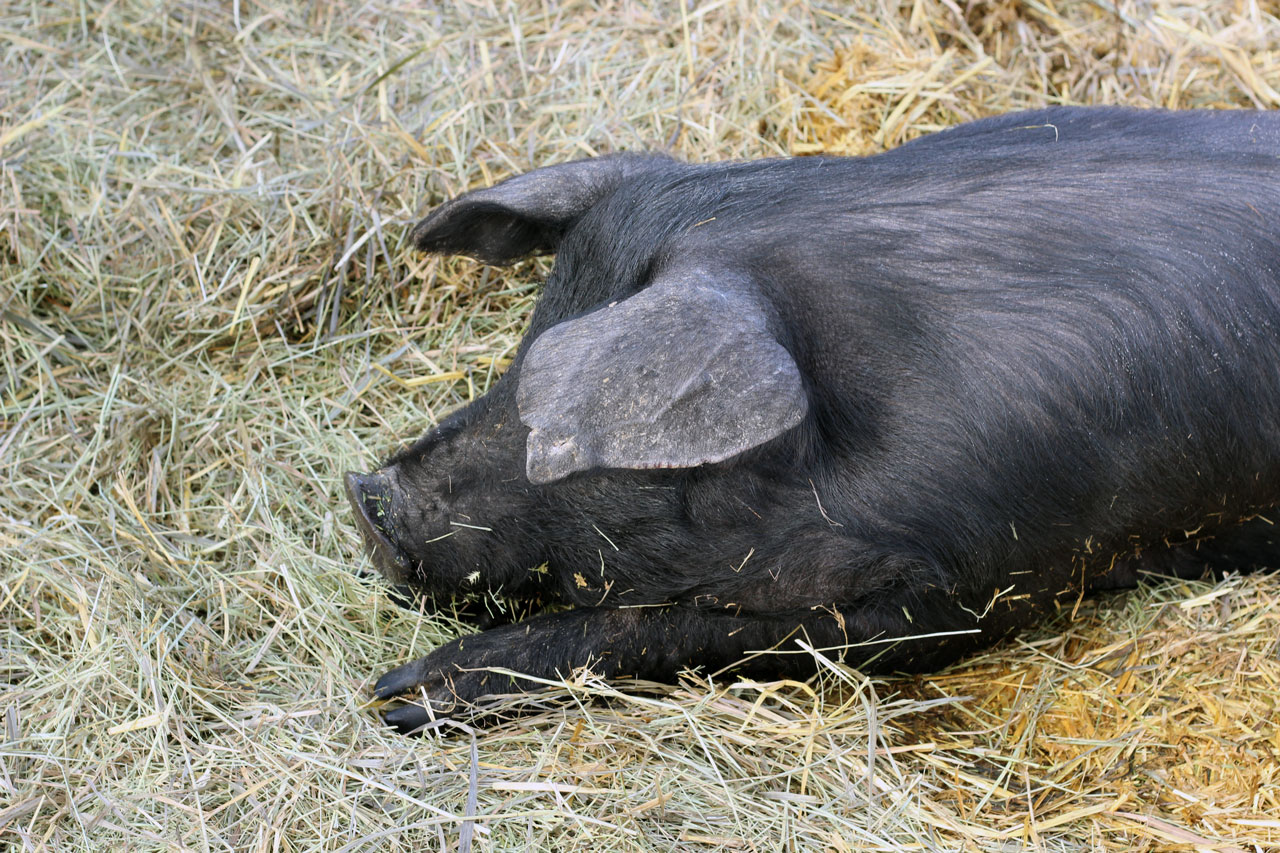