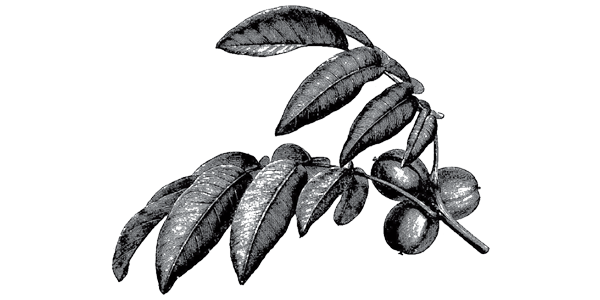 When the first European colonists settled the east coast of what would later become the United States, they discovered something vaguely familiar. Here was a hardwood tree that resembled something they’d seen in the Old World, yet was a little different. It was the native North American black walnut, a cousin of the Persian walnut, which was widely cultivated in Europe.

The Persian, often called English walnut, had been brought to Europe during Medieval times by traders from south central Asia. Its value as a nut and furniture wood crop was well known throughout the Old World by colonial times. Early Americans soon realized that the native American black walnut was just a bit different from its Eurasian relative. First of all, the New World tree grew bigger than its cousin. Secondly, its nut meat, while equally edible and nutritious, was stronger tasting. Thirdly, unlike the relatively easy to crack shell of the Persian walnut, the American’s shell was extremely hard, difficult to smash.

The American black walnut tree exists in two species. The more common one grows wild from the east coast as far west as Kansas. It ranges as far north as southern New England and central Wisconsin and Michigan. Its southern range includes Florida and the gulf coast. A second, less common species inhabits Texas, southern Oklahoma, and a few well watered locations in New Mexico. That version of the black walnut reaches a much smaller adult size, although the two species, when they overlap, will readily interbreed.

As early as 1629, the east coast American colonists realized they had something special, and exported black walnut seedlings to Europe, where the tree soon became widely prized as a decorative tree. It’s found there today in city parks in many countries. A tree in Sered, Slovakia claims a world record for its black walnut tree, reputably 25 meters tall and over 300 years old. An American tree on Sauvie Island, Oregon is 34 meters tall, but considerably younger. Both trees are around 6.3 meters in circumference near their base.

Today, the Persian walnut enjoys greater popularity in America as a food crop than its Native American relative. This no doubt is due to two reasons, the milder taste makes for greater eating enjoyment when the meats are consumed alone, and the shells are much easier to crack. However, as an agricultural asset, the black walnut, while inferior as a snack food, has several advantages over its Old World rival. Those assets go far beyond the decorative, aesthetic value which Europeans discovered long ago.

The American black walnut has five potential commercially exploitable assets, and four demonstrable benefits for improving the ecological environment. First, the tree yields two food sources, the nut meat, the major one, and the sap, occasionally tapped sugar maple style. High in unsaturated fat and protein, both are valued in candy making. Their stronger flavor than that of the Persian variety allows a given volume of nuts to flavor more candy than an equally sized portion of Persian walnut meats.

A second product is the husks. Used historically by pioneers to dye clothing, today these are a source of industrial dye valuable to the handicraft industry for fabric dying, making wood stain and ink manufacturing. A third commercial application is found in the ground nut shells. They may be pulverized to use for automotive valve grinding, in oil field drilling, and when finely ground, exfoliation in the skin care industry. The ground shells also find a market in sealing compound for oil field casings, to filter both water and crude oil, as a filler in plywood manufacture, and as an additive in making dynamite.

The fourth asset is the tree’s lumber. Black walnut is highly prized for cabinet making, flooring and veneer. Depending upon its location in a given log, black walnut wood varies in appearance despite being part of the same tree. This can make a given log very valuable to an experienced furniture manufacturer. Obviously, raising American black walnut for its lumber is a long term proposition, easily lasting more than one lifetime for a farm family, perhaps even more than two lifetimes in some cases.

The fifth potential revenue source lies in selling seedlings to landscapers, municipal parks, school districts, cemeteries and other beautification-minded buyers. Due to a natural partnership with squirrels, farmers with a producing tree will, in two or three years find there is no shortage of seedlings. A black walnut tree starts producing at age five and reaches adulthood production at age twenty.

Few tree species fit in better with the modern environmentalist movement than the black walnut. Two squirrel species, the grey and the red, frequent it throughout its range, and a third, the “flying” squirrel, lives in roughly the southern half of its range. In fact, most farmers have discovered little need to plant the tree from seed; the ever-present squirrels do it for them. Nesting birds favor its close to right angle, strong hardwood branch attachments as good nesting sites. Persons interested in Native American natural history are attracted to its status as a bonafide indigenous American species. Few agricultural commodities with good commercial possibilities also have as many environmentally beneficial positives as the American black walnut.

Of course there are constraints encountered when raising black walnut trees, as with any farm crop. Interestingly, birch and black walnut trees are incompatible, and should not be raised in proximity to one another. While no major insect pests are known to attack the nut meat by penetrating the shell, several forms of maggot do seek to burrow inside the husk. Several university agricultural researchers have over the years developed graftable strains of the tree, most notable being those at Purdue University in Indiana. This work has led to some strains more valuable for large nut yields, others better suited to enhanced timber production. It also has resulted in some varieties being more seasonally early in producing pollen than others; these shouldn’t be planted near late flowering strains so as to avoid infertile nuts. The Missouri Agricultural Extension Service maintains a list of compatible strains.

A major problem in harvesting a black walnut crop is how to most efficiently separate the husk, shell and meat. Since all three are commercially valuable, none may simply be discarded, as compared with, for example, shucking ears of corn. After husks are stripped, the shells are cracked using one of three methods. One procedure involves rolling the nuts on a hard surface, another employs an apparatus made from a car tire and metal mesh screen, a third uses a large plywood board with rows of holes slightly smaller than the nuts through which they are pounded. Whichever method is used, cracking the shells is hard work.

The nice thing about the American black walnut is its multi-dimensional nature. All in the same crop, it offers five commercial possibilities, a source of shade and beauty, an environmental bonanza for squirrels and birds, and perhaps most importantly, a living testimonial to America’s heritage.