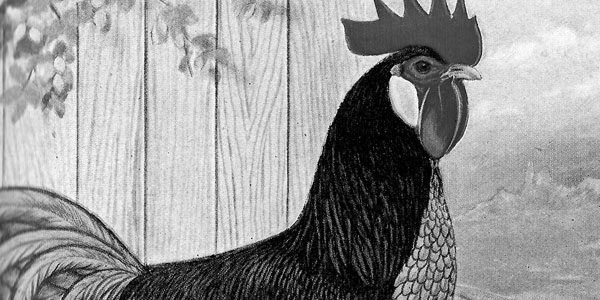 We lived about ten miles from Palestine, Texas on a lovely 160 acre farm where we raised cattle, hogs, chickens, a few ducks and turkeys and a horse. We also grew several acres of garden vegetables for trade days and personal use. My grandfather worked three days a week in town for an ice company and my dad worked six days a week in a glass factory on the other side of Palestine. Mother and Grandma kept house, did all the canning, cooking, washing, ironing and also helped weed the garden.

I had my chores, naturally. I fed the chickens, slopped the hogs, gathered the eggs, and every evening I’d ride my horse down into the pasture to bring the milk cow to the barn for milking.

The chickens weren’t free range. Grandpa had made a large chicken pen and chicken house where they laid their eggs and the only things that ran free were the neighbor’s ducks that were forever coming up the hill to quack and scratch in our back yard.

It was early spring when an old friend of my Grandpa came by to visit on his day off and brought Grandpa a beautiful white Leghorn rooster as a gift. He was magnificent with his white feathers, bring red large comb and wattle and when Grandpa placed him in the chicken pen, he stretched his wings and began to prance around the yard obviously attempting to impress the hens. He made a strange calling sound as he paraded around and stuck his beak in and out. Grandpa swore the sound he made was, “buck, buck, buck,” and Grandpa declared that his name from now on was Bucky, because he seemed so proud of his sharp yellow beak. So, Bucky, it was.

The rooster loved to crow. It didn’t matter to him whether it was dawn, noon, or suppertime, he would crow. It wasn’t just a crow or two, oh, no. The exuberant bird would crow for a good half hour before satisfying himself that he had been heard by all in a square mile area.

As the summer went on, so did the crowing and on top of that, Bucky would not stay in the chicken yard. My grandfather had strung strips of chicken wire across the top of the pens to protect the chickens from hawks, but that didn’t stop Bucky, the superbird. He would spot a space where the wire didn’t quite meet and fly up, grab the chicken wire with his claws and flop and wiggle until he was out. For each time a space was closed, he found another spot to escape through.

We had a picnic table in the back yard about halfway from the end of the house to the barn and chicken pen where we would sit and drink iced tea or sit and shell peas or snap beans and the table became Bucky’s roost when he escaped the pen.

It wasn’t unusual for Grandpa to jump up at four in the early morning and fly out into the yard to chase the crowing rooster from the table and threaten to make chicken stew out of him.

Several times a week on the nights before he had to go to work at the ice house, Grandpa would go out just before bedtime and put Bucky in a crate and place him in the barn. That was the only guarantee that he could get a good night sleep and not be bothered by Bucky’s unannounced cock-a-doodling.

For a while the rooster behaved. Maybe it was being crated up all night or maybe it was just the luck of the draw, but Bucky behaved during the night for a couple of weeks.

It was in early November that daylight savings time changed and the poor bird made his greatest mistake. With the time changing back an hour, he was more confused than ever. On the first day it changed, Bucky was silent. However, on Monday morning, instead of it being five am as he thought it was, it was four am. Bucky escaped the pen, flew up on the picnic table and at the unholy hour of four am began to crow, flap his wings, and crow again, over and over.

Grandpa, whose bedroom window overlooked the backyard, rolled over, grabbed his loaded double-barreled shotgun, aimed out the window, and fired. The screen was blown out and so was the left side of the picnic table. He aimed again and fired for the second time disintegrating the right side of the table. Grandma screamed and between the shotgun blasts and Grandma screaming, the entire house was up and on alert immediately.

Daddy grabbed his gun, not knowing what Grandpa was shooting at, and Mother grabbed me and we all went creeping through the house as Grandma put her robe on and began turning on lights as she glared at Grandpa once she discovered what had happened.

He walked into the kitchen, feeling a little foolish once he realized what he’d done. He should have put Bucky into the crate, but, not doing so was just an oversight. He mumbled that his friend probably gave us the noisy bird because he couldn’t stand his infernal crowing either. He and Daddy got a flashlight and went outside to make sure nothing else had been hit. The table was ruined, but Bucky was nowhere to be found.

I must say that it was eerily quiet around the farm without Bucky. I didn’t miss his crowing in the early hours of the morning, but I did miss seeing his strut around, showing off for his ladies. I think Grandpa missed him, too.

Grandma made Grandpa keep the shotgun behind the head of the bed instead of beside it, so nothing else would be shot at the spur of the moment.

It was three days before the feisty rooster showed up. He was a changed bird. He jumped at any loud noise and you couldn’t get him out of the chicken pen unless you physically picked him up and removed him. As for his crowing, well, he still had to announce sunrise, only now he did it from inside the pen and if Grandpa hollered, he ran to the back of the pen and shut up.

I’m sorry Bucky never took the hint. I’m sorry he wasn’t able to tell time. I’m sorry that daylight savings time caused the early demise of our picnic table. I’m not sorry I could sleep late. I wasn’t sorry that I wasn’t startled awake at four every morning.

We got a new picnic table, but Grandma insisted it be put out of sight from the bedroom window, just in case.

Bucky was never the same after that shotgun experience, but our early morning sleep was never disturbed again due to Bucky’s Close Call.