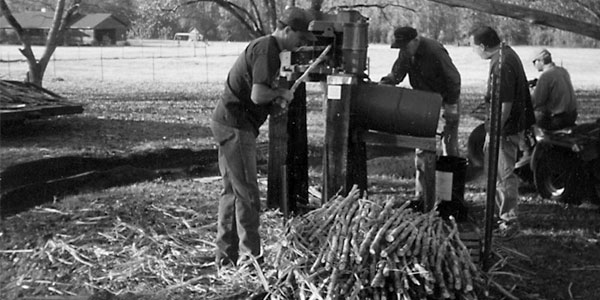 by Marjorie Dobbin of Vidalia, GA

Most sugar cane is processed in refineries to give us molasses, brown sugar, and various kinds of white sugar. However, some South Georgia farms that raise sugar cane still process it the old way to produce the special tasting sweetener for their own food. One such farm is the Rocking R Ranch in Kibbee, Georgia. It is owned by Charles and Patricia Roberts and their sons. The process they use has not changed in the past 100 years. This is how it is done. 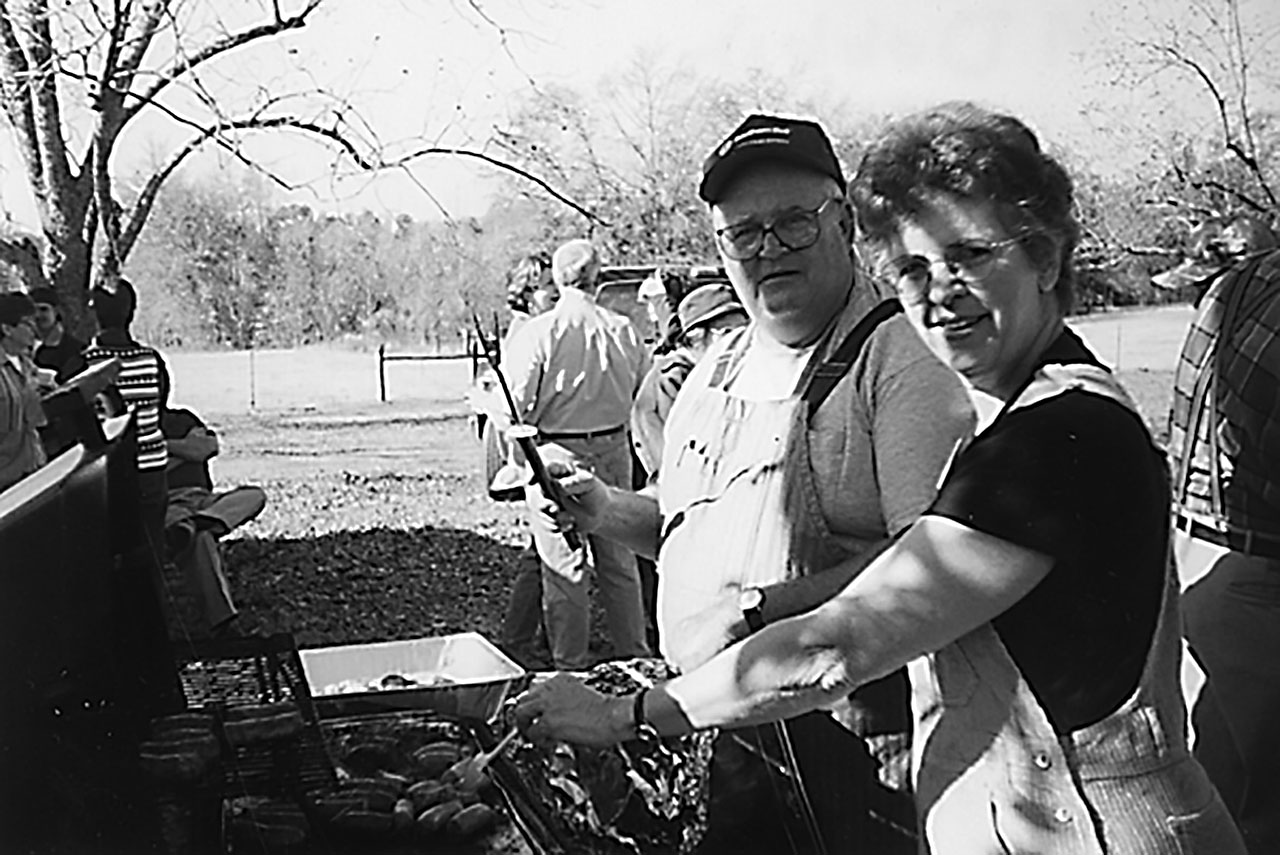 Mom, Dad, and I have driven to Uncle Charley’s farm. It is the Saturday before Thanksgiving, their traditional cane grinding day. Early in the morning, family and friends gather for a hot breakfast under the trees near the operation. Mr. Charley grills sausages. Miss Pat sees that there are hot coffee, biscuits, grits, and scrambled eggs. Guests bring foods also, such as banana pudding, pecan brittle, and barbequed venison. I decide to wait until later for my breakfast. I want to help with the grinding. 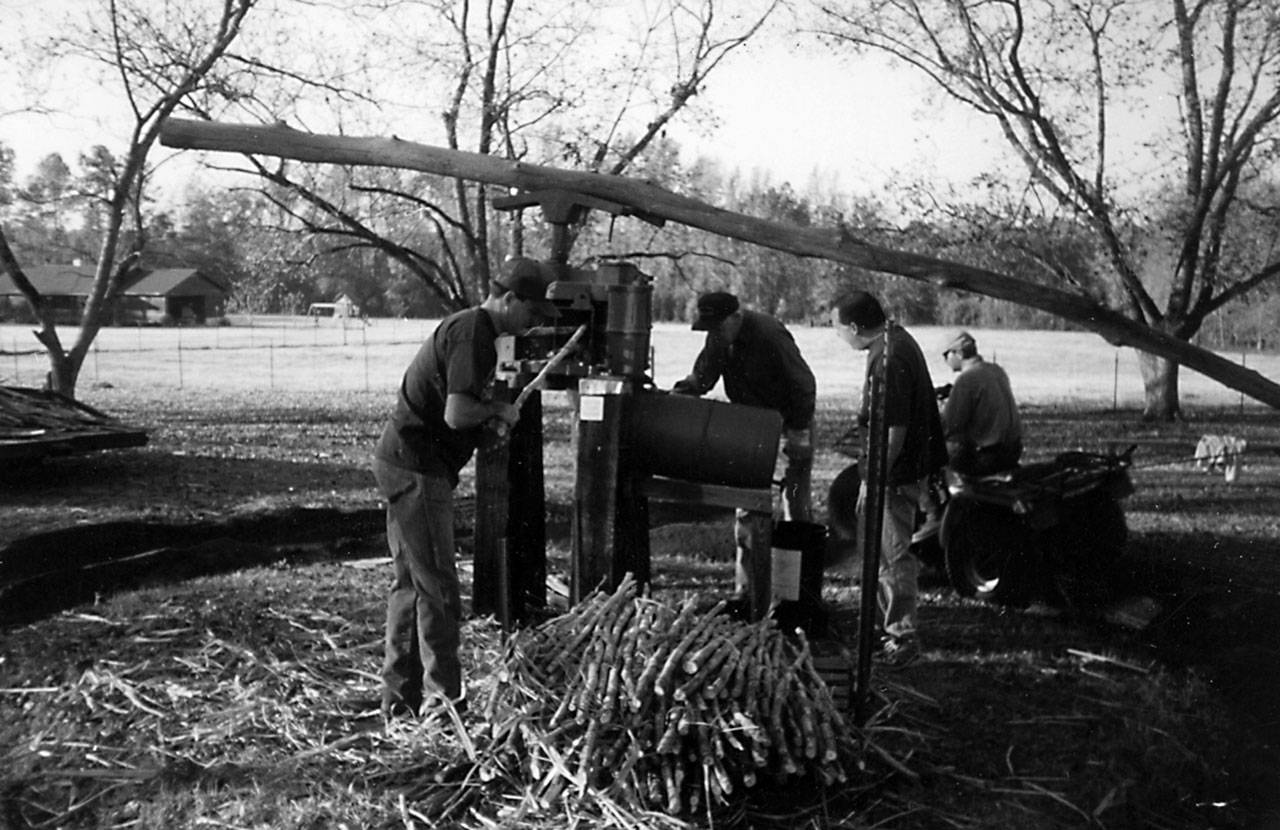 The cane has been growing in the field since spring. Uncle Charley and his sons have cut it and brought the stalks to the grinder machine. Here, men stack the long stalks of light greenish-tan cane on a rack near the grinder. I ask if I can help. They show me how to feed the stalks into a slot between two revolving wheels. 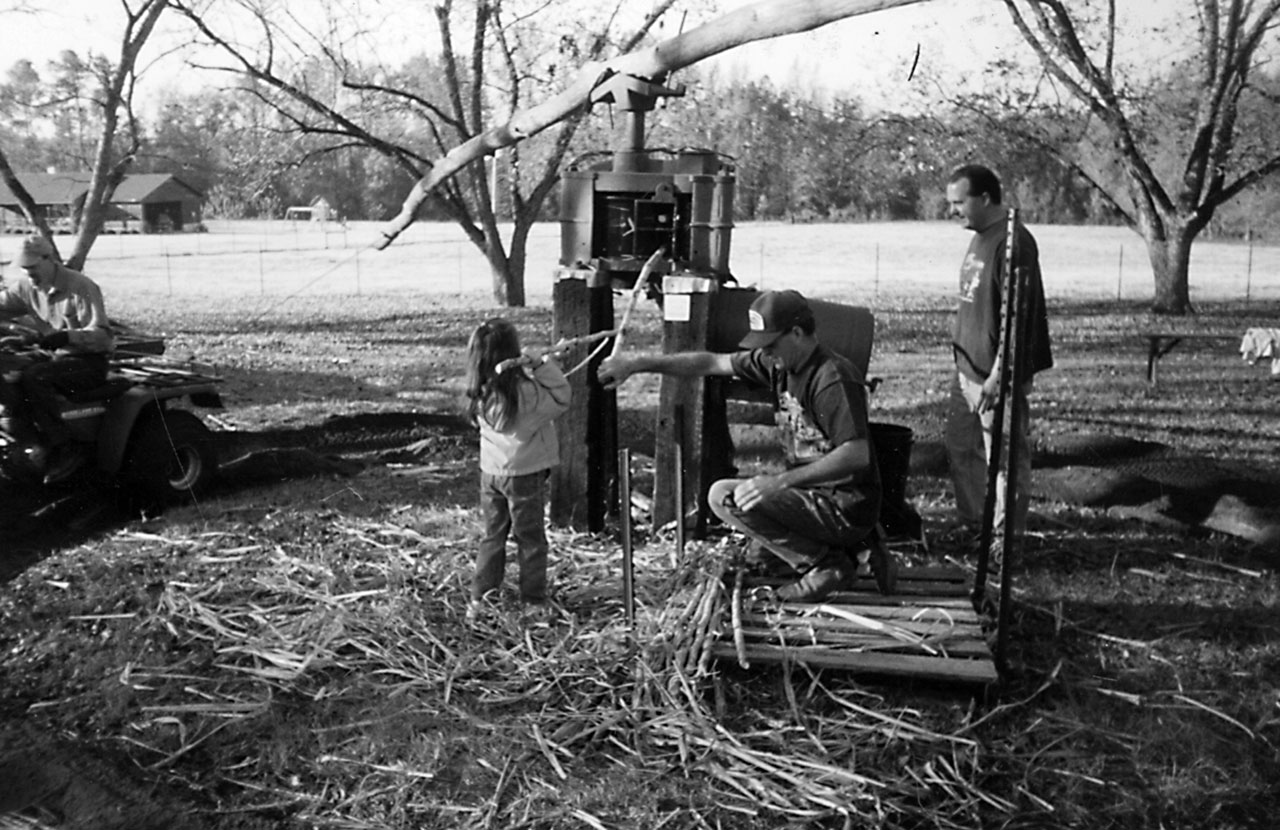 I shove the ends of cane stalks in, just like this little girl is doing. But my eyes are on a four-wheeled vehicle that is being driven around and around us. It is pulling one end of a long pole. The pole turns the gears in the grinder, causing two cylinders to turn toward each other. When the cane stalks are fed through the cylinders, they come out flattened on the other side. Last year Uncle Charley said that maybe I could drive the four-wheeler. For the next fifteen minutes, I am very busy, following the circle and keeping the proper speed. It was fun. 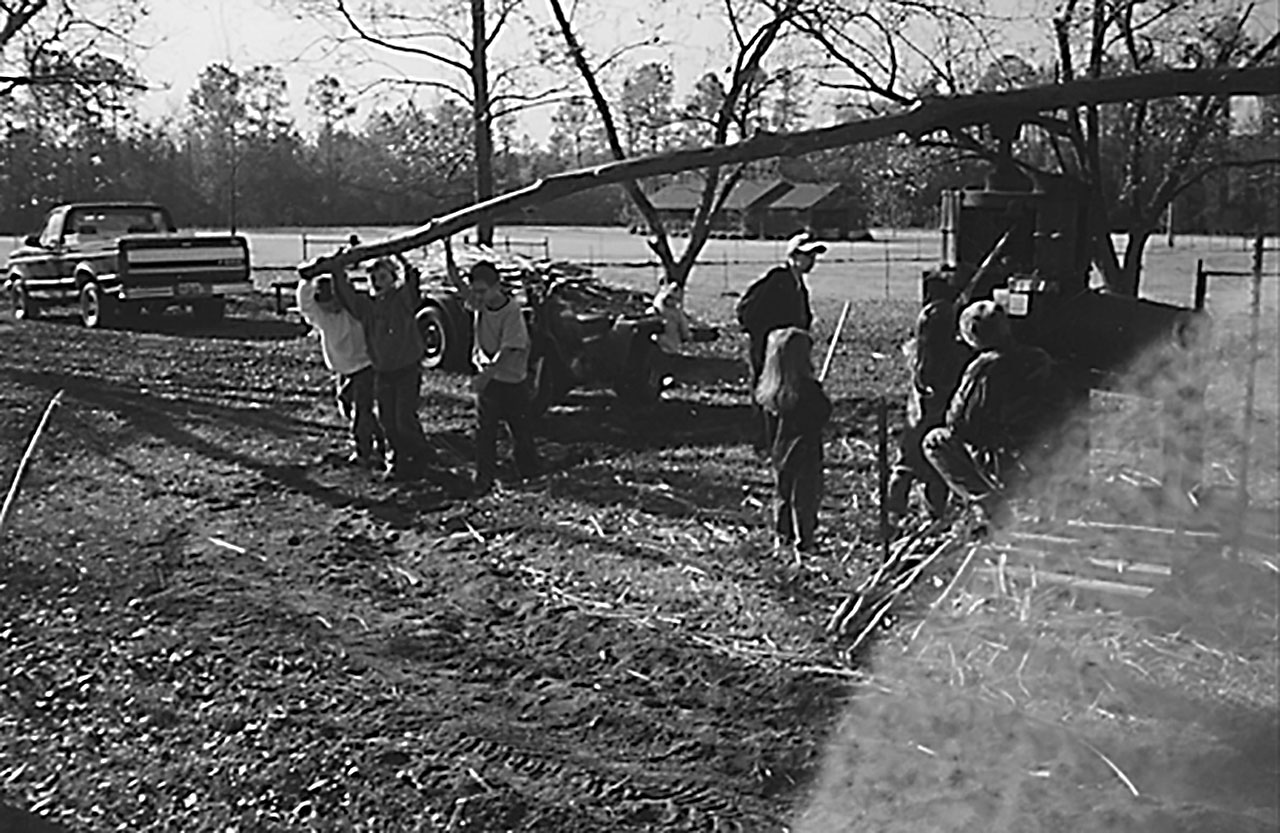 While Uncle Charley’s son shows some children how to feed cane, some of my buddies try their strength at pushing the pole around. Before gas-driven vehicles were used, the family mule or oxen pulled the pole. The farmer would start it walking, and it would keep on going until the farmer stopped it. 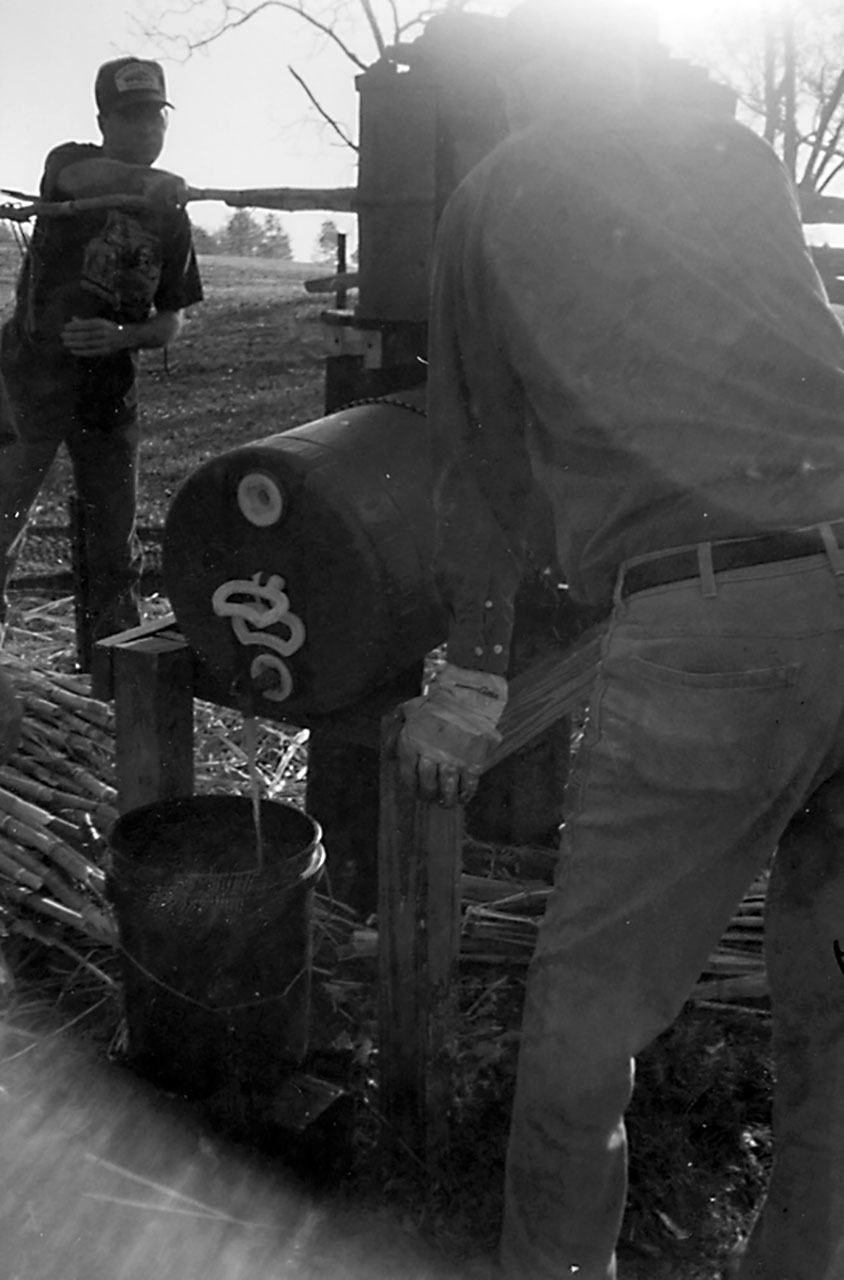 The juice squeezed from the cane is collected in a blue barrel. The juice looks like grayish water with bits of cane floating in it. When the barrel is almost full, one of the adults drains it into a large pail, carries it to the boiling shed, and dumps it. 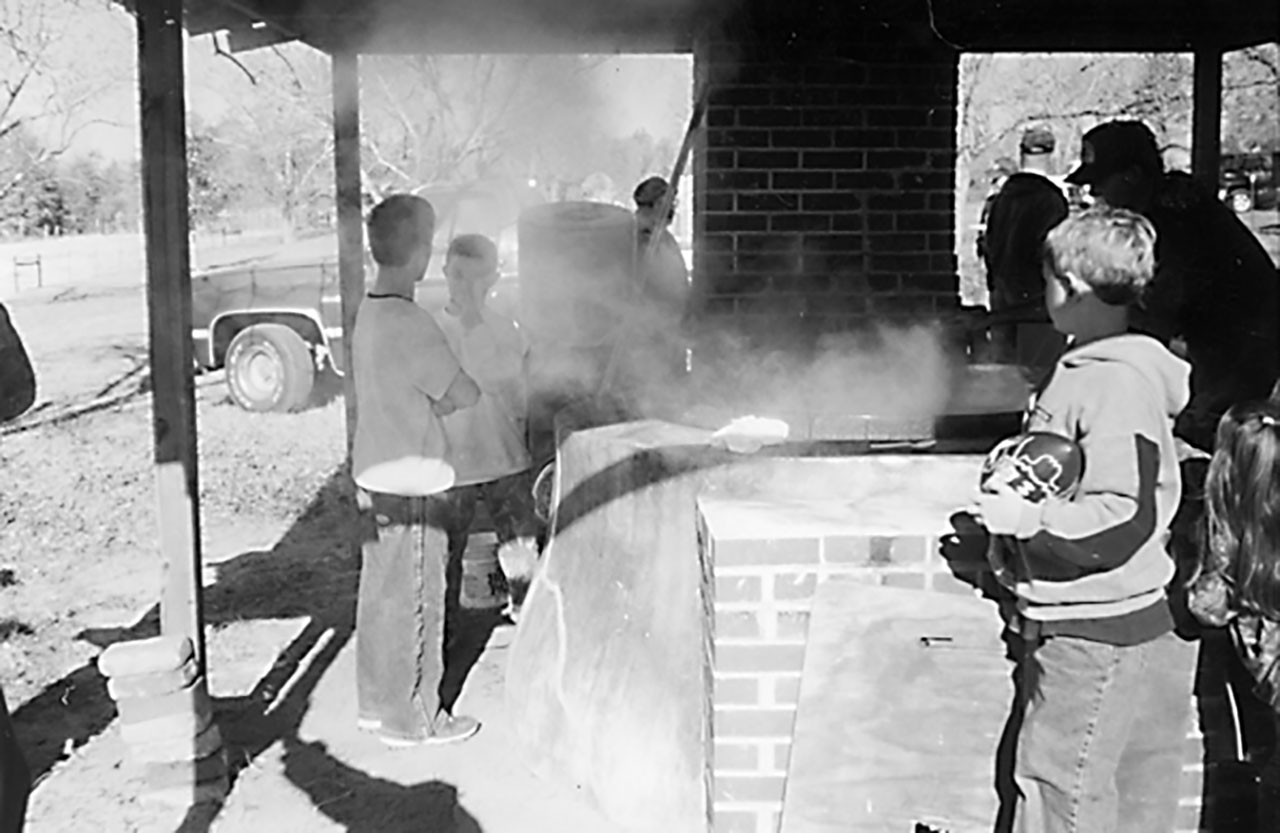 With a plate heavy with scrambled eggs, cheese grits, and a sausage biscuit, I wander over to the boiling shed. Some boys are standing around the huge cauldron encased in a cement wall. Under the cauldron is a gas-fed fire. The juice boils, and the steam is fragrant and sweet. Long ago, farmers used to use a wood fire. One person would always be busy feeding the wood into the fire under the cauldron to keep a constant temperature. 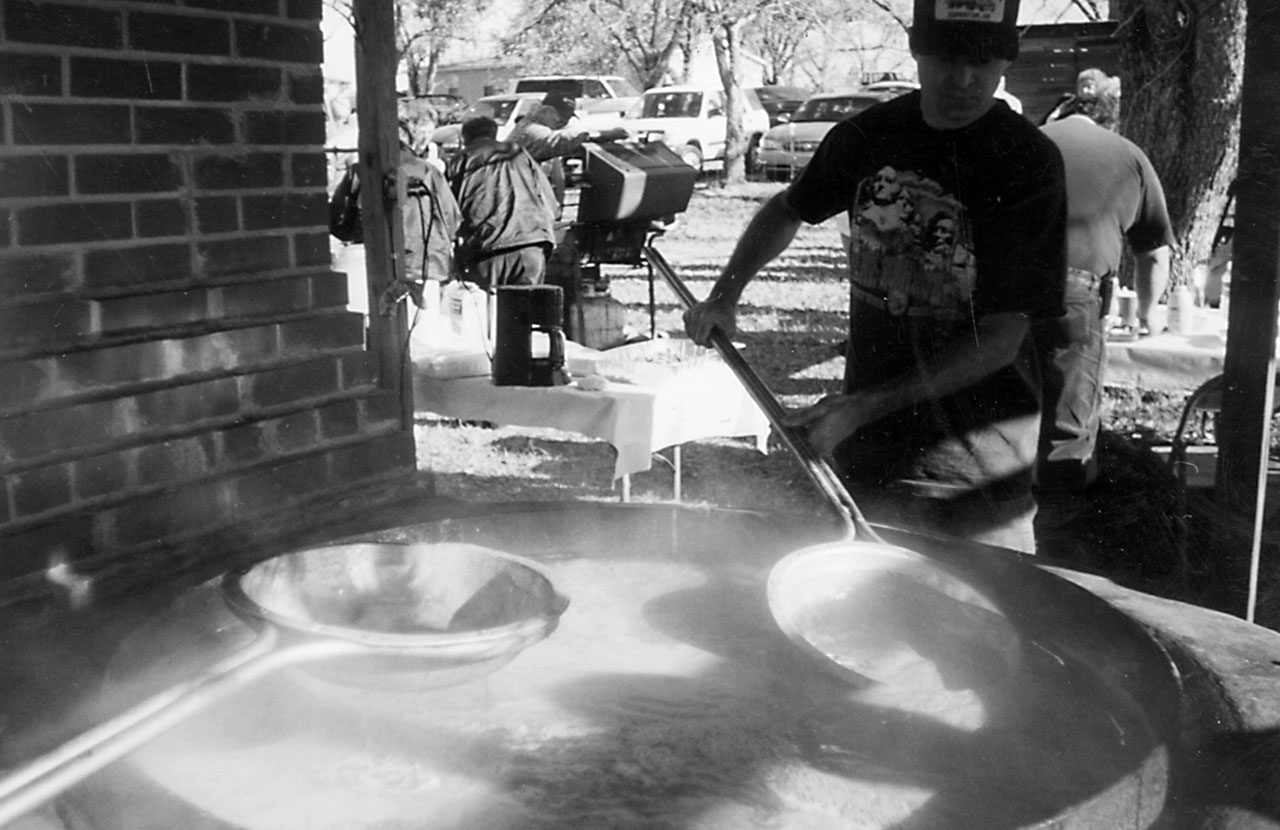 I watch the men working in the shed. They scoop off the impurities and bits of cane that float to the surface, using skimmers – flat circular screens about eight inches in diameter fastened on long handles. The men dump the contents of the skimmer in a discard bucket. The syrup has to boil in the cauldron until it reaches the right consistency. One of the men told me that the best part of the whole process is when the syrup is drained off. Around the kettle would be cane candy to scrape off and eat. 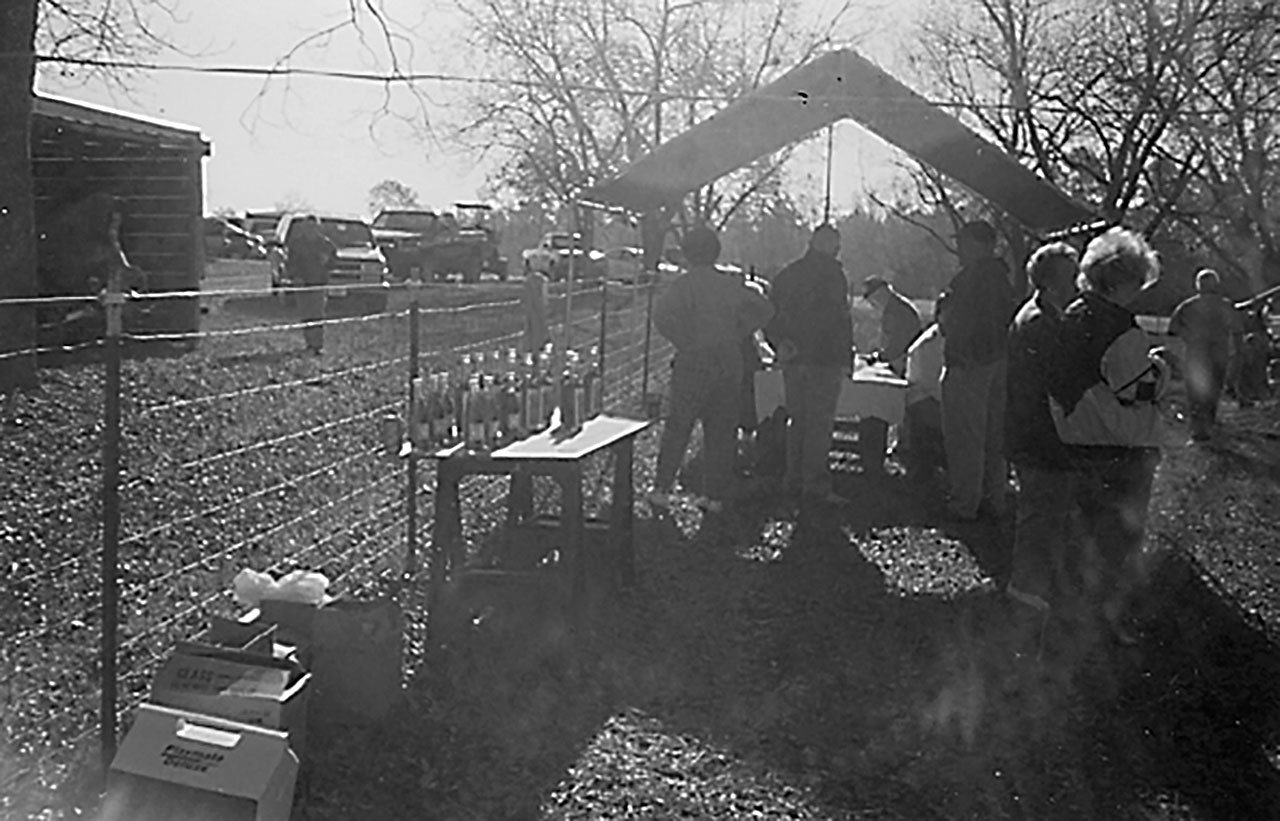 In time, the syrup is packed in pint and quart jars. The Rockin’ R label is put on them, and they are offered for sale. Mr. Charley makes a special trip to deliver bottles to the people attending the Grinding.

When Mom, Dad, and I have the syrup on biscuits, pancakes, or waffles, it reminds me of the fun of feeding the cane, driving the four-wheeler, skimming the syrup, and eating breakfast with friends in the crisp fall air.