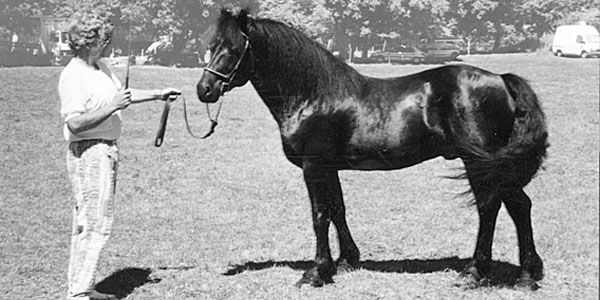 by Mickie Proulx of Valdez, AK

In the Fall ’97 issue of SFJ you printed an article on the Cheval de Merens, the all black horse of the French Pyrenees. I was immediately obsessed by their beautiful stature, a very strong draft-type-looking horse with powerful legs and long flowing manes and tails. The article sent me running for maps to locate France and the Ariege Valley, the central location for the Merens. After making contact with the writer of the article and being told of the major Merens horse show in August, plane reservations were made. How exciting to go see hundreds of these beauties first hand. We went to France solely to see the horses but France ended up being a great place to vacation with ancient castles, cathedrals, underground rivers and prehistoric caves.

Cheval de Merens means “horse of Merens.” Merens is a small village nestled in the Pyrenees Mountains and is the birthplace of the breed. To get to the Pyrenees Mountains you fly to Paris, there you can either drive south twelve hours or take a commuter plane to the city of Toulouse. In Toulouse you can rent a car and in an hour or so you’re in the mountains. The Pyrenees Mountains lie along the border of Spain, extending 270 miles and reaching 11,200 feet in height. It’s a beautiful area with many high meadows where most Merens are left to somewhat survive on their own.

The horse show is held every August and runs for seven days. The best mares with foals, one, two and three year olds are brought down from the mountains to compete. During the week the show is held in a different village daily. The best four or five horses in each class are selected to go to the three days of final showing in picturesque Boulan. What a way to see France!

Much emphasis is put on the mare and foal classes, where they are shown and judged as a pair. There are classes for best one-, two- and three-year-old fillies and colts, and classes for three year olds under saddle where the rider is not judged at all. The colts vie for points towards their “authorization.” Many strict exams must be passed before they can be recognized as a stud. It was refreshing to see the horses being judged without all the sterling silver and flashing American fashions that seem to take over the show rings in the U.S.A.

The weekend was exciting with trick riders, acrobatics, racing, driving, and a most impressive demonstration of the sure-footed Merens being ridden down steep, rocky embankments into the show grounds. A hearty group of Italians rode their Merens from Italy, over the Alps (about 500 miles), to join in the festivities. They were celebrating their country’s 20th anniversary of Merens ownership.

The show ground vendors offered great French cuisine, breads, wines, souvenirs and leather goods. To top off the Sunday show a baby Merens was raffled off.

We noticed the French to be very kind and hospitable. There are 5-Star Bed & Breakfast’s available in the Ariege. Soffie’s B&B, located right in Merens, has a view of the world. Ivan Quinquis’ B&B, in the village of Biert, offers trail rides where you can ride a Merens into the mountains.

The highlight of our trip was visiting “Helene’s Happy Horse Farm.” Owned and operated by Kevin Henshall & Helene Sapy. Their sprawling old French-style farm is in the farming village of Lafajole and surrounded by huge fields of sunflowers. Kevin took the time to introduce us to all fifty of his Merens horses, including his four stallions. They all had personalities! And gorgeous! We were able to watch Kevin work with his horses and ready his stallion, Galurin, for the show (he took Champion).

We discovered that Helene and Kevin have the reputation of being the top breeders of Merens. They were very patient with our inability to speak any French (they speak English). We inquired as to which horses were available for purchase and we had it narrowed down to a half dozen that we thought we should bring home with us. The prices of the horses are reasonable but the cost of airfare and quarantine … well, we had to leave them with Kevin for now.

There is only one Merens mare in the United States belonging to a lady in Oregon. How unfortunate for us Americans. Maybe someday we’ll be blessed with them here in the states.

Ahh … meanwhile, I’ll continue to dream of those versatile black mountain horses high in the Pyrenees.