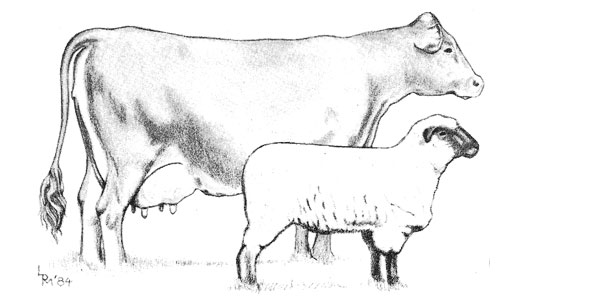 We calve in January and February, and some years it can be very cold – and we calve the cows in a barn. Most of the older cows go into the barn readily because they’ve been there before. But the first-calf heifers are a different story. Many of them are hard to get into the barn.

We solve this problem with a Judas cow – a gentle, older cow who leads the heifers into the barn. Even the wildest or most timid heifer will usually follow another cow. The old cow serves as security for the timid young heifer, and into the barn they go.

Our maternity ward is a small pasture that was once an orchard. On the end nearest the house, we have several calving pens. In good weather, many of our cows calve in these pens. We may put them into the barn later, but we like to have them calve outside, if possible, where we can observe them more easily.

But if the weather is cold and nasty, we put them in the barn to calve. All of our first-calf heifers go into the barn, so that if we have to help one, she’ll be in a stall where we can sneak up and help her, or tie her up if necessary. Also, we like to leave mama and baby alone in the stall where she calves, without having to move her or disturb her. It makes for better mothering, the less we have to fuss with these first-time mamas right after they calve.

We usually calve about 30 to 40 heifers, and have to have an easy way to get each one into the barn. This is why the Judas cow becomes an important part of the “team.” When a heifer goes into labor we put her from the maternity ward into a calving pen, and when it’s time to put her in the barn, we get the Judas cow in with her, get the barn stall ready, open the gates, and head them to the barn. The Judas cow marches to the barn and the heifer follows, with my husband and me herding the heifer along and making sure she stays right with the cow.

On our ranch we’ve had two excellent Judas cows over the years, Prue and Jillie. Prue is a pet that we raised on a bottle (she has a cleft palate and is one of the “characters” in our herd). Prue was our first Judas cow, for we could call her in from the orchard, and she was gentle and easy to put into the barn. She’s getting old now, but still doing the job. But she always calves early in the season, and once she calves and is out in the field with her calf, we no longer had an available Judas cow. So then we used Jillie, a gentle cow who didn’t seem to mind going to the barn a couple dozen extra times to lead heifers in. Jillie always calved late, and that was perfect. After Prue calved we could use Jillie for the rest of the season.

But Jillie was middle aged when she began her career as Judas cow, and she grew old. Last year we sold her. We started our calving season this year with Prue doing the job, but halfway through the heifers she calved and left us without a Judas cow. We needed a new one. But who? Several of the cows we tried didn’t work out. They were either too wild or ornery or silly themselves, or too unpredictable, making it difficult to get to the barn, as well as being a bad influence on the heifers.

Then my eye fell on Josephine. She was just a young cow, pregnant with her third calf, and timid. But she was smart. And she was also going to calve very late. We have breeding dates (and thus calving due dates) for most of the cows. It seemed pointless to break in a new Judas cow who was going to calve soon herself, leaving us without a Judas cow again. So Josephine was chosen.

The first time we used her, we ran two extra cows to the barn with her and when she finally learned her guidance chores, we rewarded her with a cookie! Now, whenever we put cows into the calving pen from the orchard, she is right there to come too, just in case we need her. And this is OK because she helps lure some of the more wild or timid ones into the pen.

She learned quickly. If we needed her, all we had to do was call her (“Josephine, come get a cookie!”) and she’d come down to the gate. It amused us how well she figured out what was going on. In the middle of the night, if she heard the pickup start, she would get up from her bed in the sawdust pile and come down to the gate, for she knew we were blocking the lane to the barn and getting ready to put somebody in and that her services were needed. She knew she would get to do her job again and earn another cookie. She was a working woman, and she took her job very seriously. And she trusted us to fulfill our part of the bargain; she knew she would always get her cookie afterward. Cows are a lot smarter than most people give them credit for! Josephine showed us that a cow can be trained to do a lot, in anticipation of a future reward.

She became gentle and trusting, and today you can call her from anywhere just by telling her she’ll get a cookie. How she loves cookies! We had several heifers calving late and we hoped Josie wouldn’t calve before they did. It worked out just right. Josie led them all to the barn and was the last to calve, and had a HUGE heifer calf (probably from eating all those cookies). We are hoping she’ll calve late again next year. If so, she’ll definitely have the job again and earn a pile of cookies!