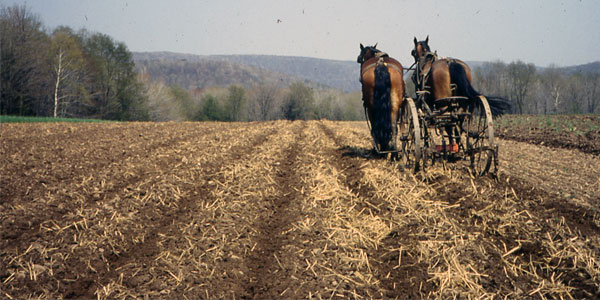 When Stephen Leslie asked us to put together a sidebar on cultivator setups for his upcoming book, The New Horse-Powered Farm (Chelsea Green, 2013), we realized it had been almost 15 years since we had cultivated this topic in the CQ column. We thought it was high time to reintroduce these essential tools for row cropped vegetables as well as the guidance system we developed for Horsedrawn cultivation. Hopefully the principles will be of value to the new wave of teamsters getting started in small-scale, organic vegetable production, even if the tools and attachments that we use are not available.

Market gardening became so much more relaxing for us and the horses after developing a Horsedrawn Guidance System. Instead of constantly steering the horses while trying to lay out straight rows or cultivate the vegetables, we could put the team on autopilot and focus our whole attention on these precision tasks. The guidance system has been so effective that we have trusted visiting chefs to cultivate the lettuce we planned on harvesting for them a few weeks later.

Although it took a couple of years to work out the details, developing this horsedrawn guidance system was simply a matter of recognizing the horses’ natural inclination to follow a pathway, and then realizing we could use the riding cultivator to create these horse-friendly pathways before planting the produce. We attached five large tractor sweeps in the flying geese formation shown in the first photo. When engaged in the soil, the three forward sweeps backfill each other creating a relatively level bedtop while the furrowing action of the outside sweeps define the width of the planting beds.

We found it was important to line up the cultivator wheels, single trees and outside sweeps so that the horses, cultivator and sweeps all tracked in the pathways. As we work our way across the field laying out beds, we simply put one horse and cultivator wheel in the new pathway made by the previous pass and use the pedal steering on this old Oliver cultivator to keep the outside sweep on the mark and straighten out the beds as necessary.

After sweeping the beds into place, we like to flatten and firm the bedtops with a cultipacker to draw moisture back up to the surface and make a smoother seedbed for planting and cultivation. You can see from the hoofprints in the photo how the horses like to follow the shallow furrows made by the outside sweeps on the cultivator just like their tendency to follow a harrow mark or their own paths out on pasture.

Laying out the beds as the final step of seedbed preparation provides several benefits. The overlapping sweeps do a good job of undercutting residual weeds or cover crop clumps before the vegetables go in the ground. This extra pass over the field also gives the horses an opportunity to get acquainted with the riding cultivator and following the furrow before using the same setup and system — minus the middle sweep — for the more delicate work of cultivating the produce. Training the team to follow the pathway rather than the crop row makes it so much easier to cultivate vegetables soon after planting. The horses know where to go before the row of produce is visible.

Forming the beds ahead of time also simplifies the task of marking the planting rows. Again, the horses and cultivator wheels track in the pathways. The only difference is we replace the sweeps on the riding cultivator with a single tooth mounted between the cultivator gangs to mark a planting furrow in the center of the beds.

One drawback to this planting system is the time required to change the attachments on the cultivator from bed-forming to planting mode and then back again to the sweeps for cultivating. We solved that problem by acquiring a second riding cultivator dedicated entirely to planting operations.

The second cultivator, a McCormick-Deering, had seen better days when we got it. The wheels were splayed and the gangs too bent for precision cultivation. However, it was more than adequate for planting operations like making a slit in the soil for hand-setting transplants or opening up a furrow for large seeded crops like potatoes and peas, and then backfilling the furrow with disc hillers.

Seeing the labor-saving advantage of having extra cultivators on hand for specialized purposes, we kept a lookout for more of these reasonably priced McCormicks. We now have a fleet of four riding cultivators: the Oliver permanently setup with sweeps for bed-forming and cultivation; two McCormicks available for different planting modes (mulch-till, ridge-till, strip-till, no-till, and clean seedbeds); and another rigged up with rolling Lillistons for high-residue zone cultivation.

The photos highlight some of these very specialized setups for accomplishing site-specific tasks on our unirrigated farm. They are definitely not necessary for horsepowered market gardening. In fact, we sometimes spend more time hitching and unhitching the team to different cultivators and adjusting the attachments than planting and cultivating. In this respect, the fleet has made our lives more complicated. By contrast, the horsedrawn guidance system makes the actual fieldwork very straightforward. 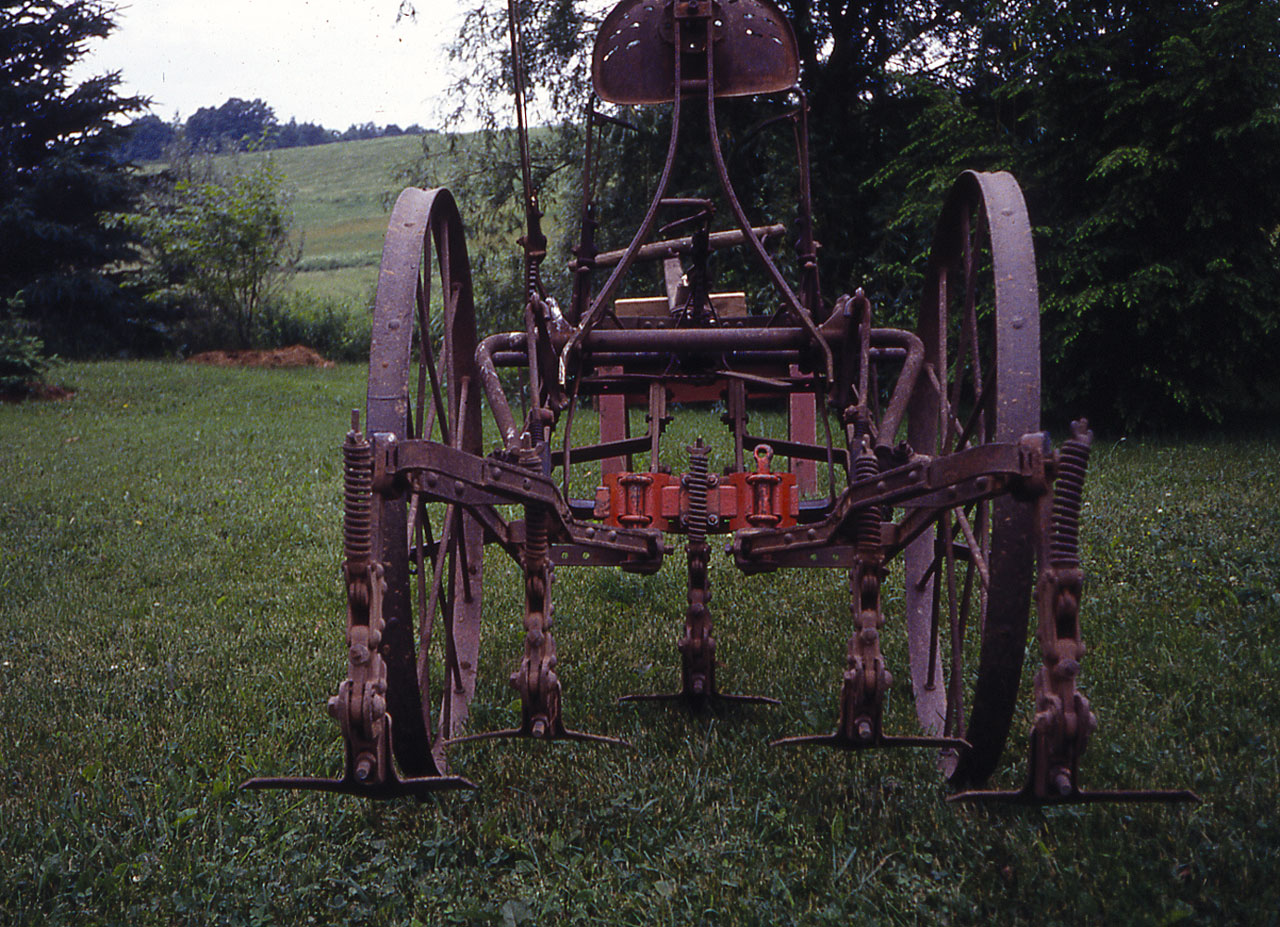 Oliver riding cultivator in bed-forming mode. The 12” sweeps, mounted 8 1/2” apart, define a 34” bed. We made the cross-bracket for the middle sweep from junked Allis Chalmers tractor cultivator parts. Only tool required – a hacksaw. 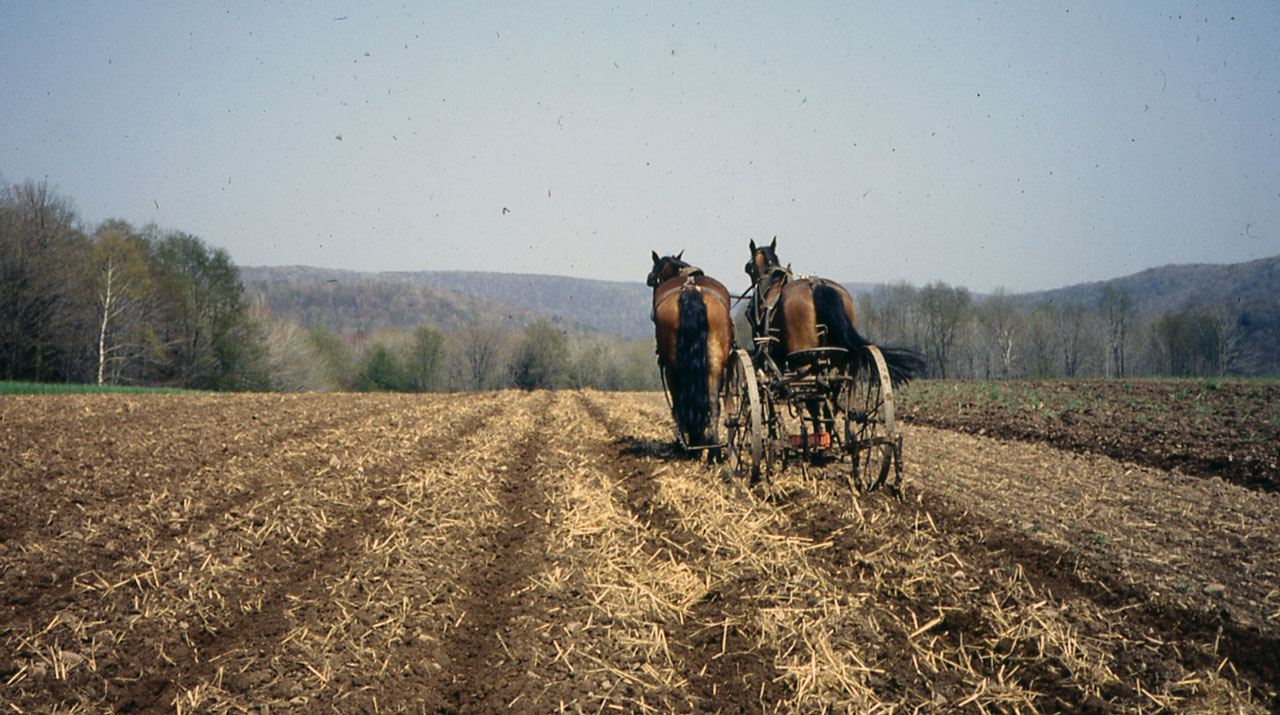 Laying out the single-row planting beds with the Oliver. The widely spaced 1/4” Row Crop tractor sweeps can handle a lot of cover crop residue without plugging up.

Rolling three beds at a time with a 9’ cultipacker. 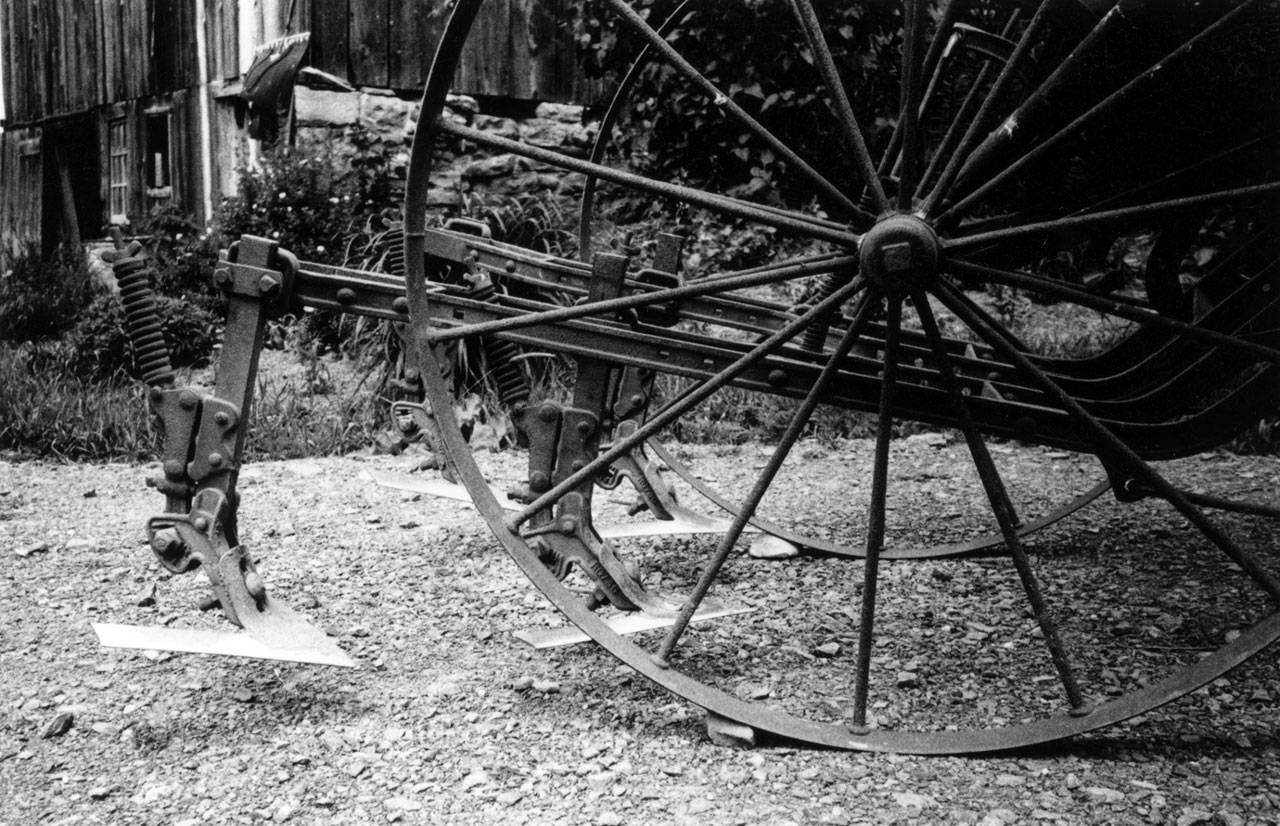 For cultivating the row cropped vegetables, we simply remove the middle sweep and adjust the inside sweeps so they run flat, skimming under the surface of the soil. Changing the angle of the sweeps is just a matter of loosening the bolt at the bottom of the shank and moving the shoe forward until the serrated wedge-shaped washer lines up with the outermost notches. (If the shanks have been bent or are limited in their range of pitch, it may be necessary to place washers or shims behind the stem of the sweeps to insure they run level.) We prefer the low profile Southern Peanut Sweeps close to the row instead of the more aggressive 1/4” Row Crop Sweeps. Both types of sweeps have been available from Agri-Supply (1-800-345-0169). 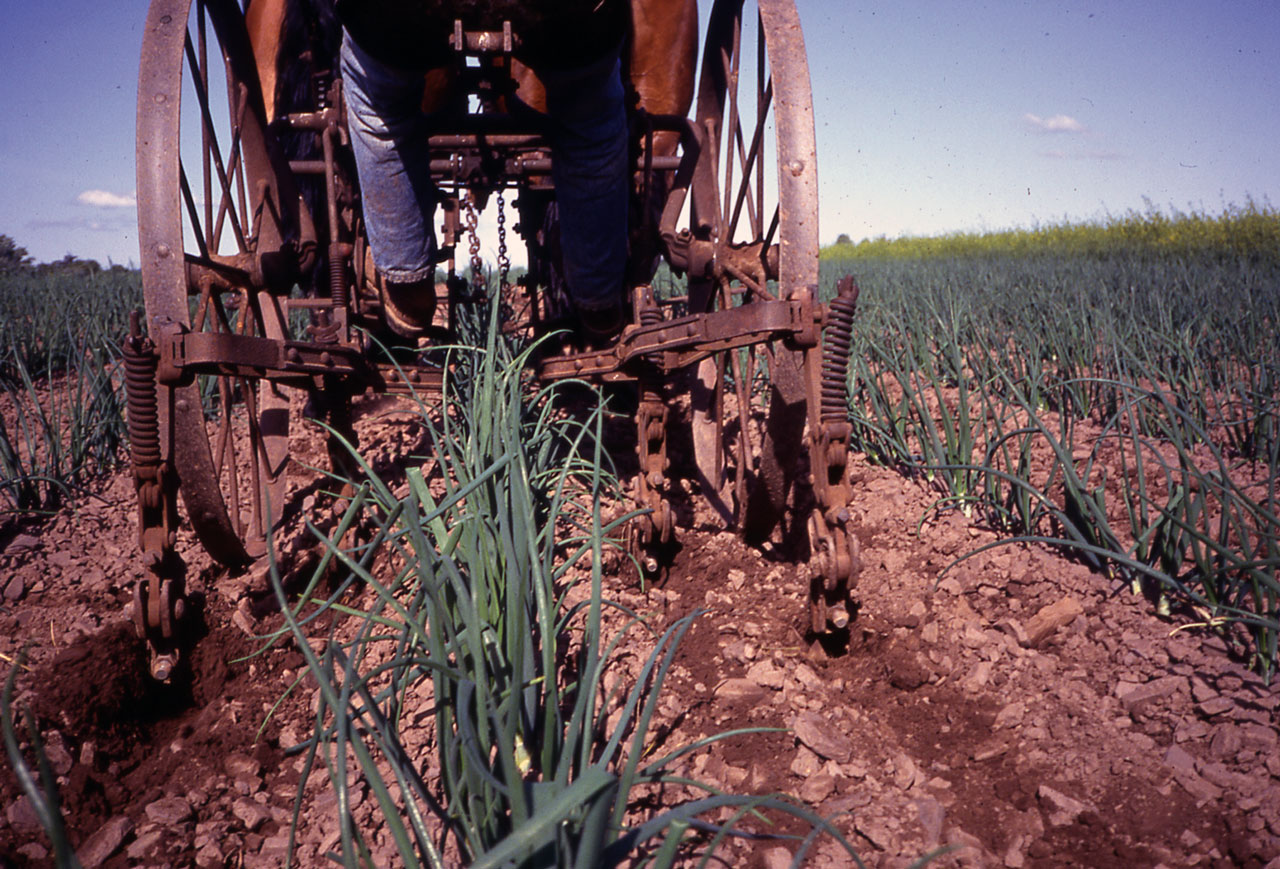 Note how the soil flows over the inside sweeps rather than being thrown on the crop. The 12” sweeps also make it possible to position the shanks far away from the row so they do not push stones or clods on to the delicate vegetable plants or bruise the foliage. 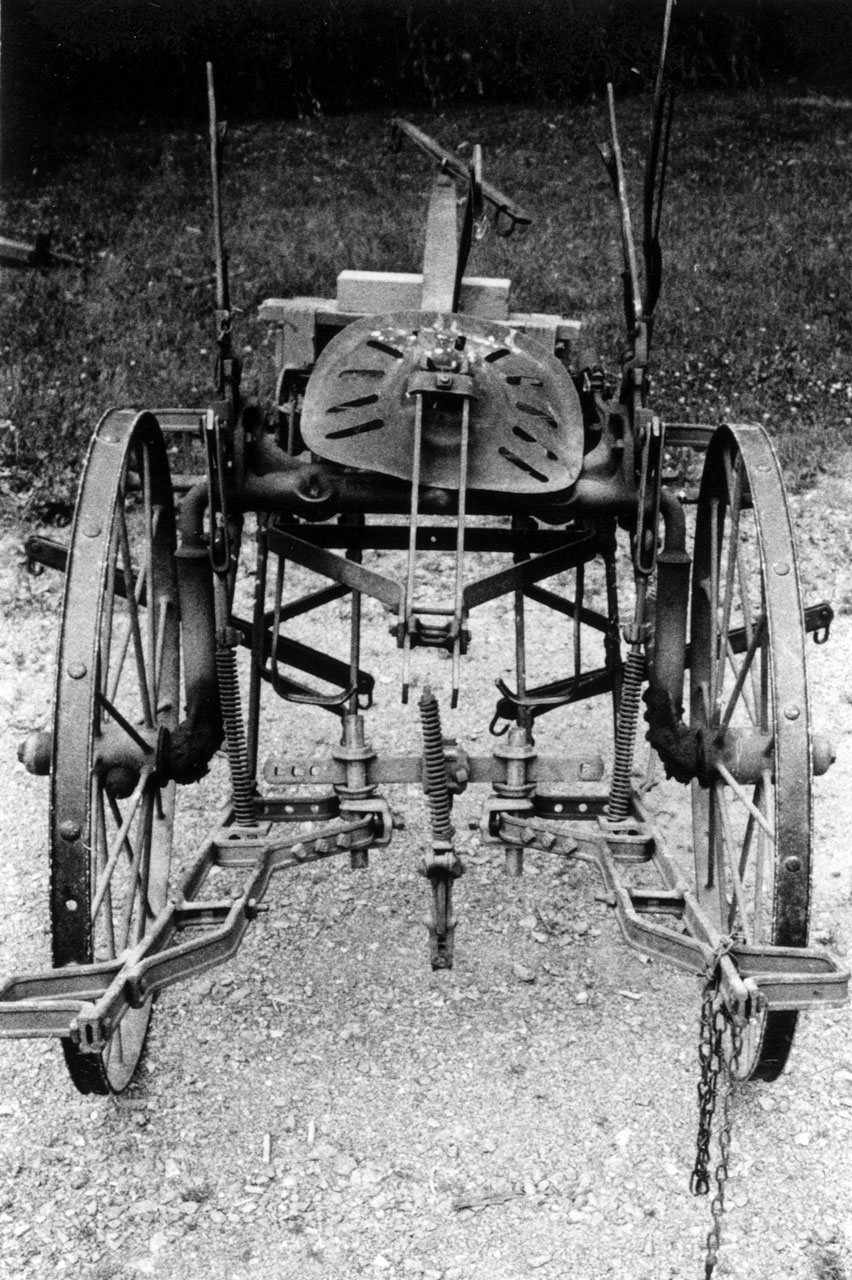 We use this McCormick-Deering riding cultivator just for planting operations. In this case it is set up with a 1” tooth on a lightweight cross-bracket to mark a furrow in the middle of beds for transplanting by hand. 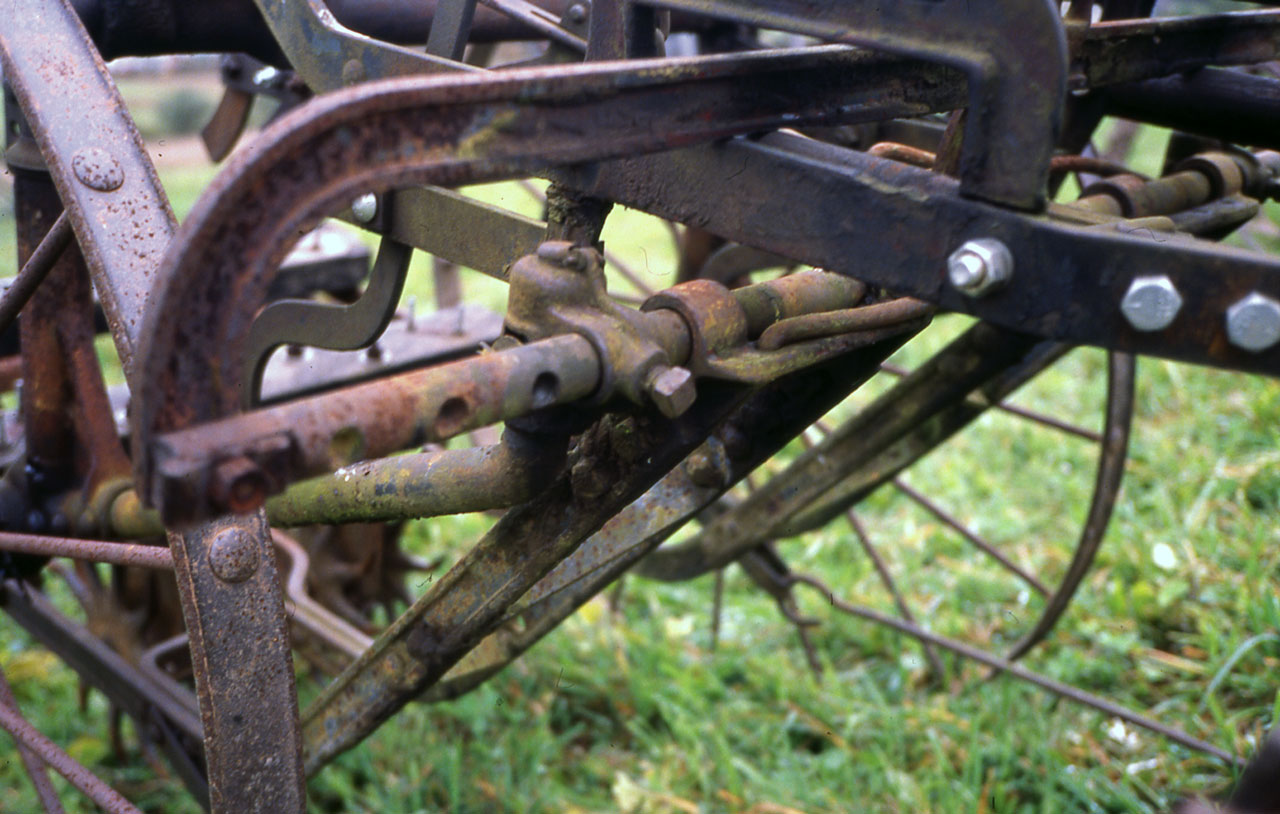 The McCormick-Deerings are designed for four different wheel spacings, ranging from 36” to 48” apart. We use the narrowest wheelbase to match as close as possible the 34” beds formed by the Oliver. To change the wheel spacing, loosen the square-headed set bolt at the front of the cultivator and slide the axle arm to the innermost position. Then jack up the cultivator and… 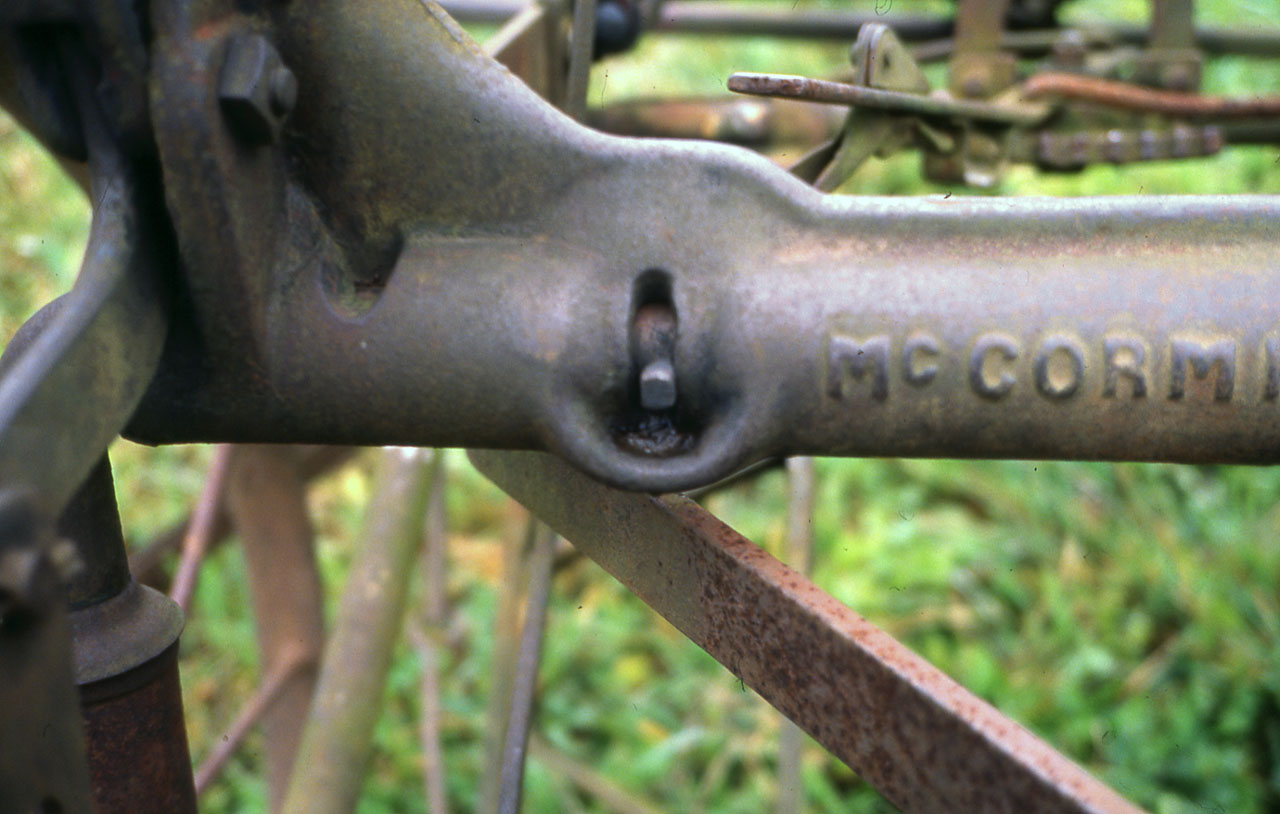 …remove the pin from the main frame in order to slide the wheel in until the pin can be replaced in the outermost hole. 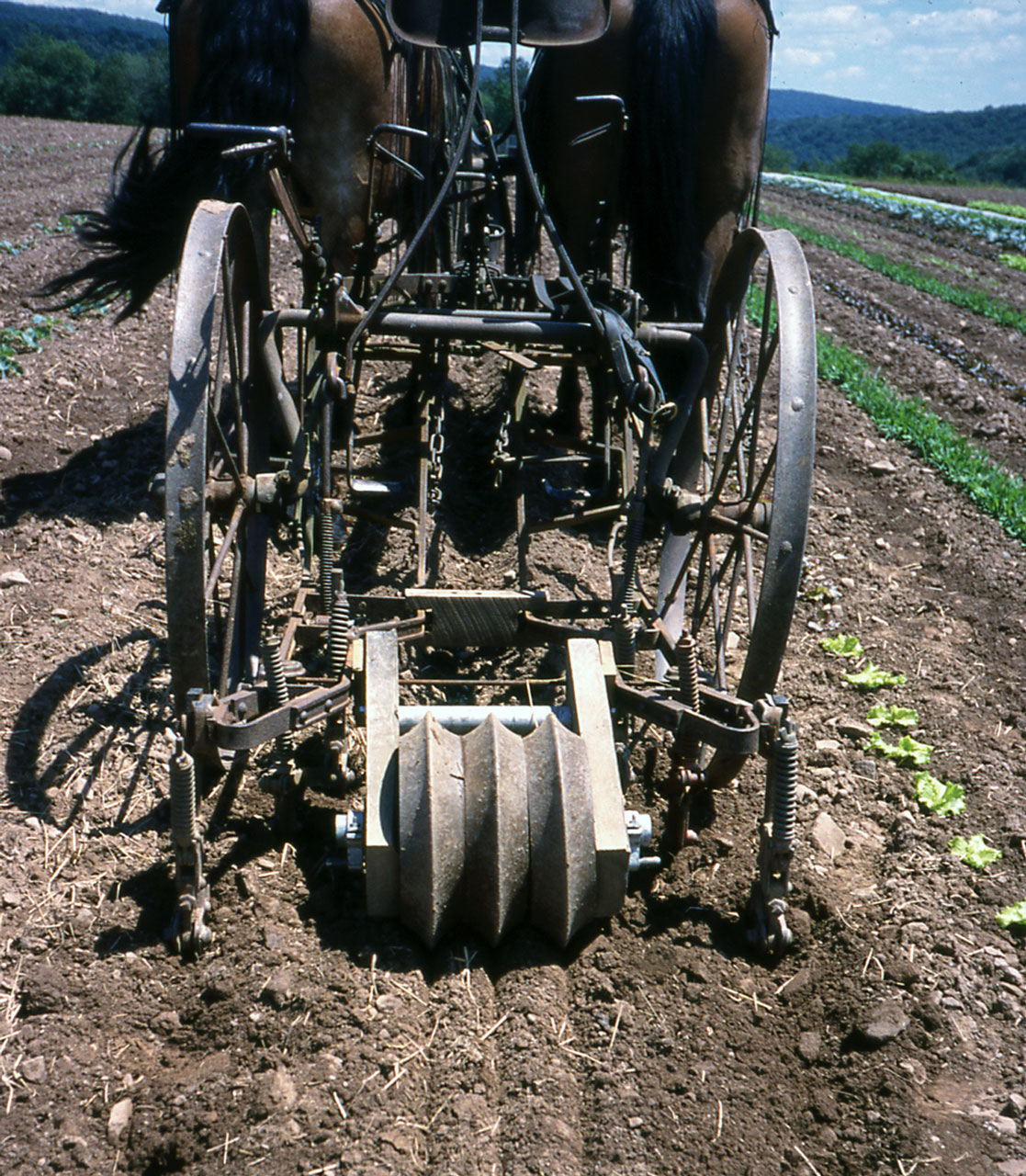 Combination bedformer-cultipacker. This setup comes in handy when renovating unplanted beds where there is not enough room for the full size cultipacker. In this instance, we are using the inside sweeps and mini-packer on the Oliver to cover pea seed scattered in a wide furrow made by the McCormick with a potato shovel attachment. However, the primary benefit of the mini-packer setup is the firm groove it makes in the middle of the bed, ideal for direct seeding vegetables with a walk-behind seeder. 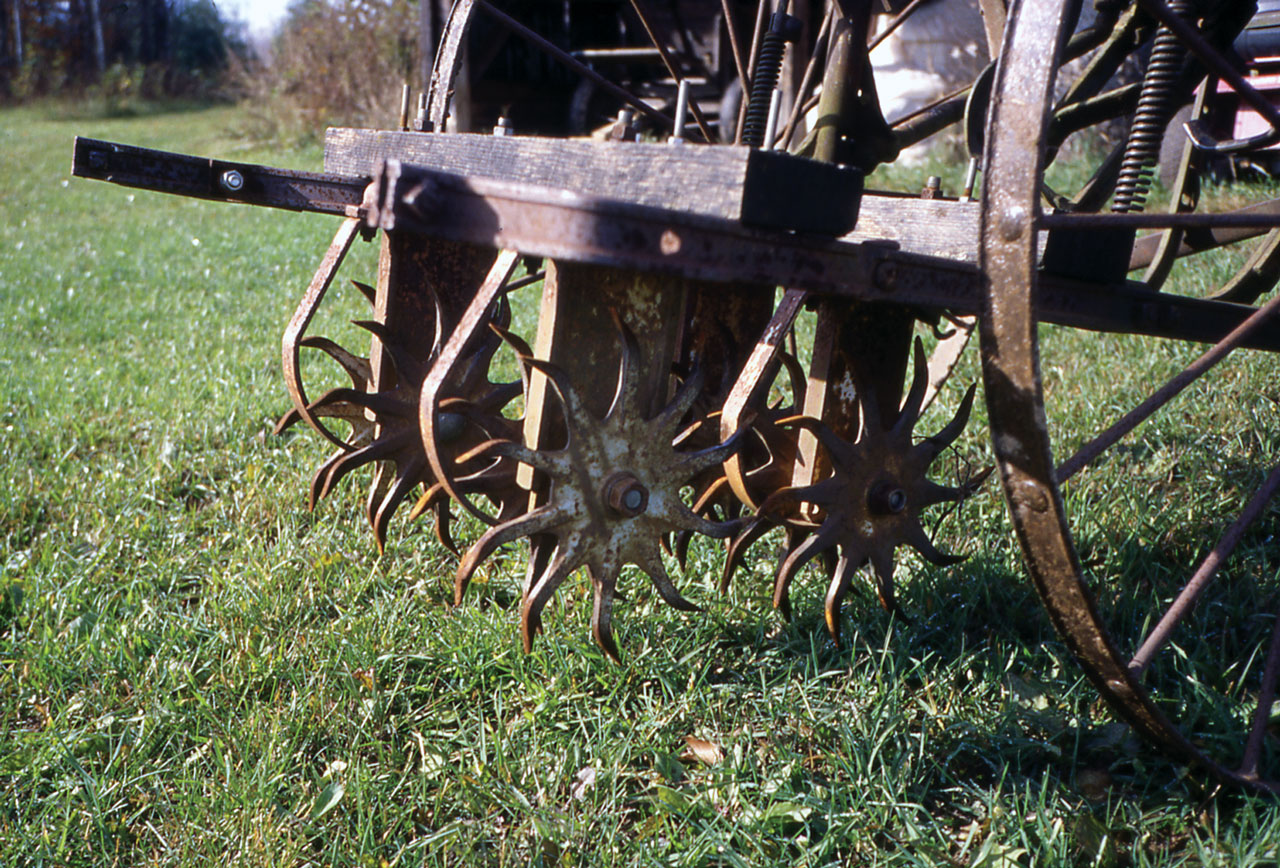 Zone Cultivation. We rigged up these old Lilliston rolling cultivators on 2 by 4” crosspieces for close-to-the-row soil aeration and weed control. The offset spyders do a nice job of loosening the crust next to small plants in preparation for aggressive cultivation in the pathways with the sweeps or traditional cultivating shovels. We also use this zone cultivation setup for crops planted on ridges or interseeded with a living mulch. 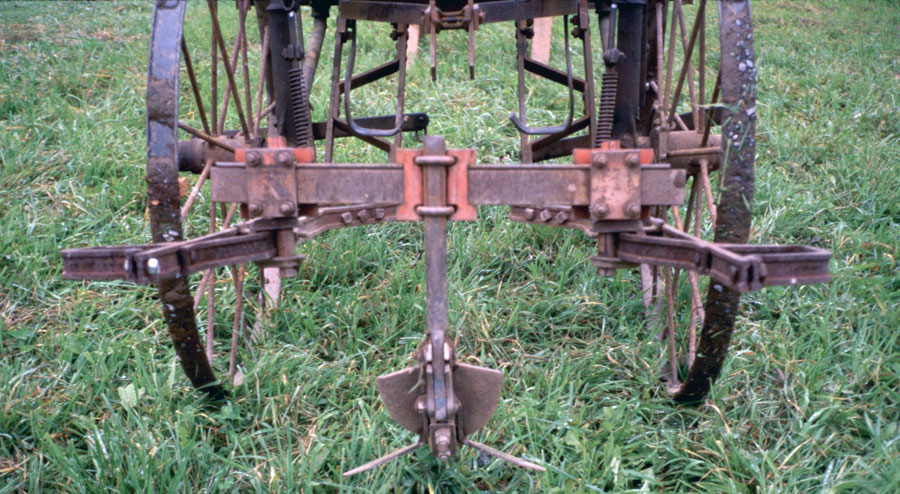 This wobbly old McCormick with splayed wheels and bent gangs is not suitable for precision cultivation, but still in good enough shape to use as a high-clearance, minimum tillage tool. The 12” sweep at the bottom of the extra-long tractor shank works well for undercutting row crops after harvest or surface tilling cover crops. The potato shovel bolted to the top of the sweep serves as a ridging wing, throwing soil on the residue to begin decomposition and facilitate follow-up tillage. We made the heavy-duty cross-bracket attached to the back of the gangs out of two pieces of angle iron held together by Allis Chalmers cultivator clamps – no welding necessary. In a future CQ, we hope to show how we set up these old McCormicks for strip-tillage and clean seedbed renovation.