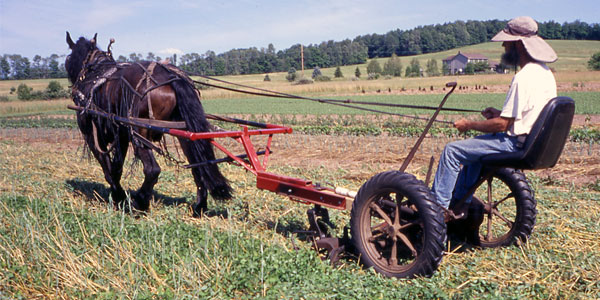 This year we used one horse for most of the heavy fieldwork in the bio-extensive market garden and pasture. As of this writing on October 29, the solo horse tachometer shows 79 hours of harrowing and rotary hoeing, 45 hours mowing, 33 hours plowing and 13 hours spreading compost for a total of 170 hours of single-horse farming.

Going single did not occur to us until we began receiving questions from prospective teamsters who felt it would be more manageable and economical to get started with a single horse than a team. After 29 years of market gardening with two or more horses, our impetus to try out one-horse farming was not a question of management or economy, but due to the radically diverging horse temperaments on our farm. Sometimes we wondered how we accomplished the critical fieldwork with our perfectly mismatched team of crossbreds:

Frank – tall, dark and handsome. A super athletic and high-spirited horse. You know, the lip-flapping, tongue-clamped-between-the-teeth, frothing-at-the-mouth kind, always wide awake and eager to be the first to cross the finish line. “A racehorse on steroids,” as a neighbor put it. Simply too-eager-to-please might be more accurate. At least, that is how we explain his attentiveness to voice commands and willingness to patiently stand for long periods of time.

Ben – short, blocky and blonde. A totally relaxed and reliable animal. Ben is completely unflappable – even his lips – and in no hurry to get anywhere unless food is involved. Ben has that classic draft horse trait of gradually leaning his whole weight into the collar to get a load started, quite a contrast to Frank’s Road Runner approach to farm work.

Initially, we were able to use the two horses’ very different personalities to our advantage. Ben’s steady nature had a calming effect on Frank, and Frank’s non-stop ambition encouraged Ben to pick up the pace. Although not exactly poetry-in-motion, we relied entirely on this odd couple for the heavier fieldwork while transitioning our original team of crossbreds, Becky and Buster, into semi-retirement.

Much to our surprise, Frank’s racehorse mentality did not slow down with time. After six years in harness, it seemed like he was just getting up-to-speed, trying to pull the whole load if that was the fastest way to the finish line. Meanwhile, Ben was going slower and slower with age and arthritis. It was no longer as much fun to drive this mismatched team and the horses were starting to show signs of frustration with each other. Frank, in particular, was developing some bad habits, weaving back and forth, twisting his head to the side, two-stepping his way across the field – anything, it seemed, to show his impatience. We thought everyone might be happier if we worked him alone. 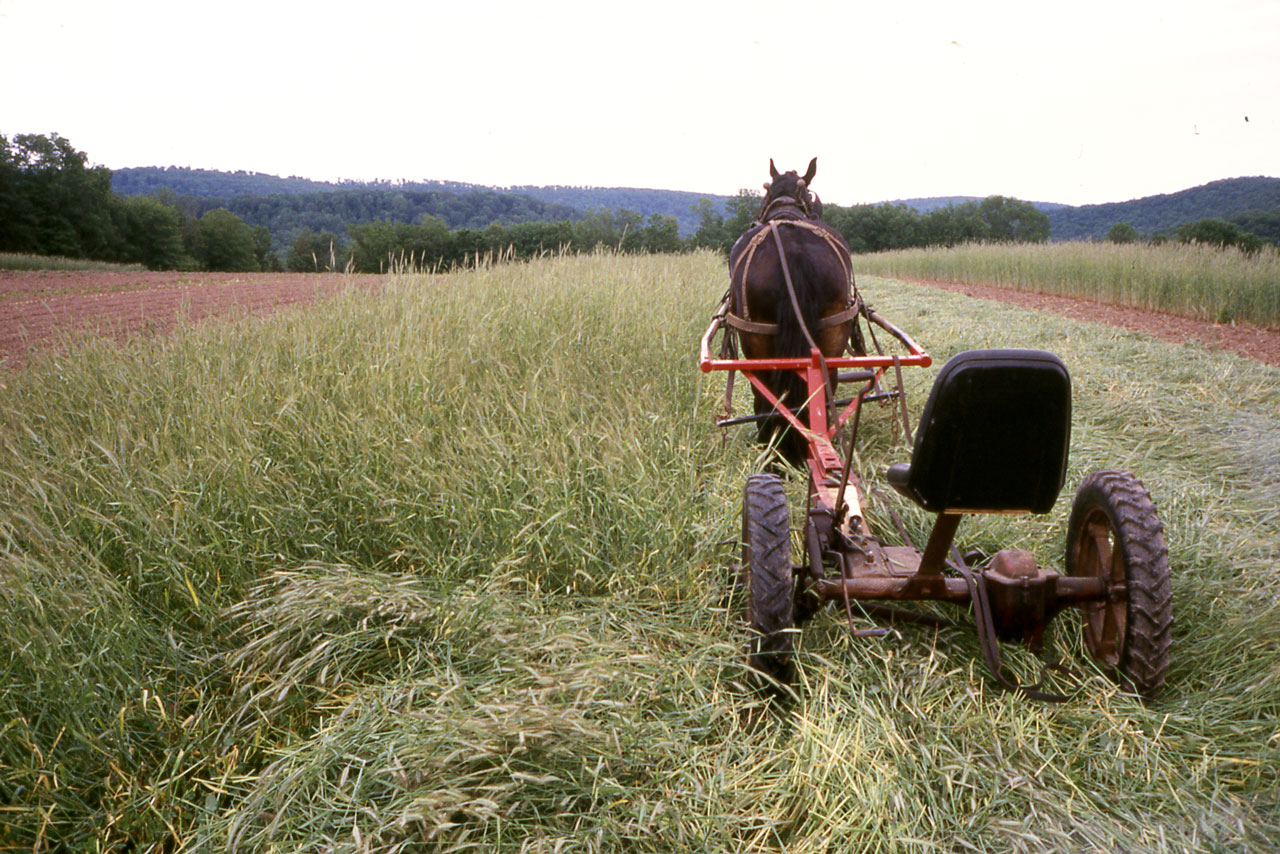 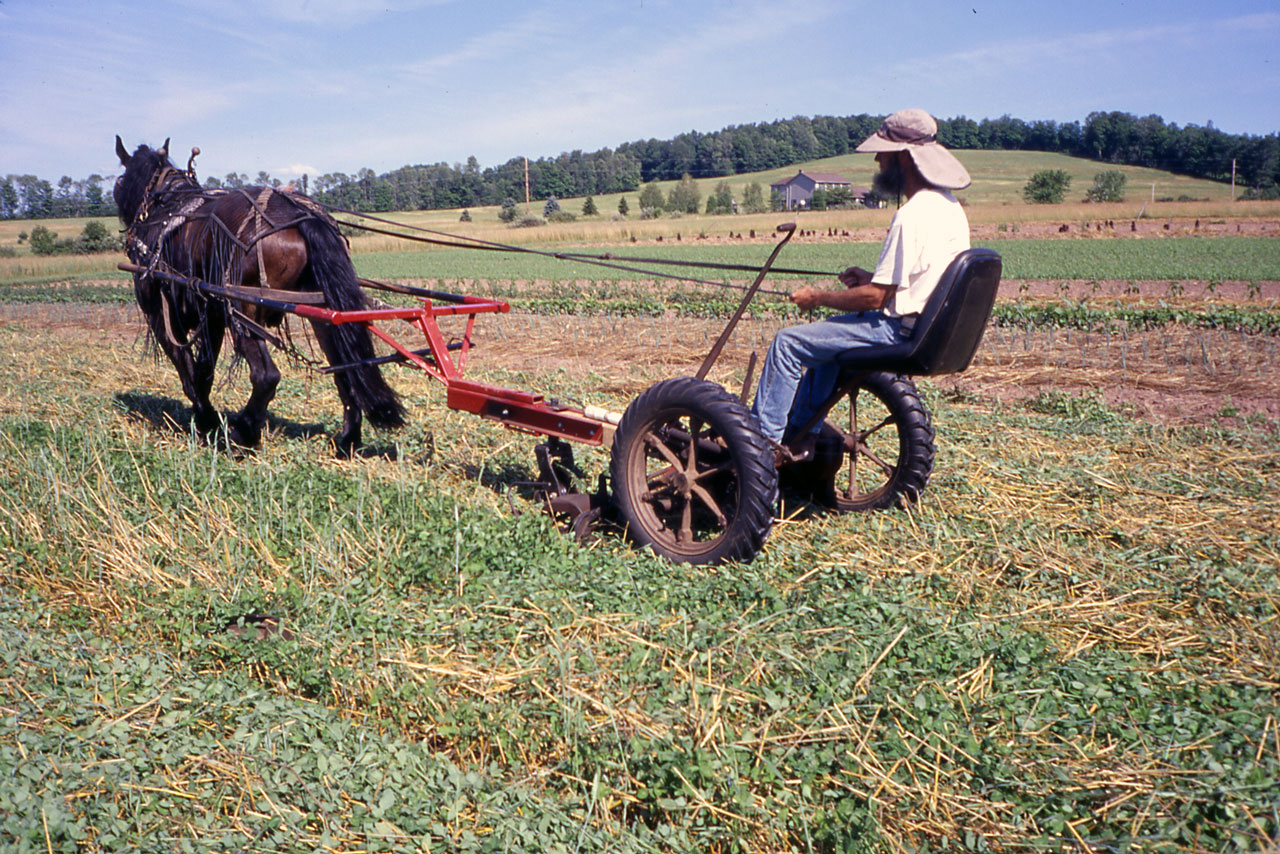 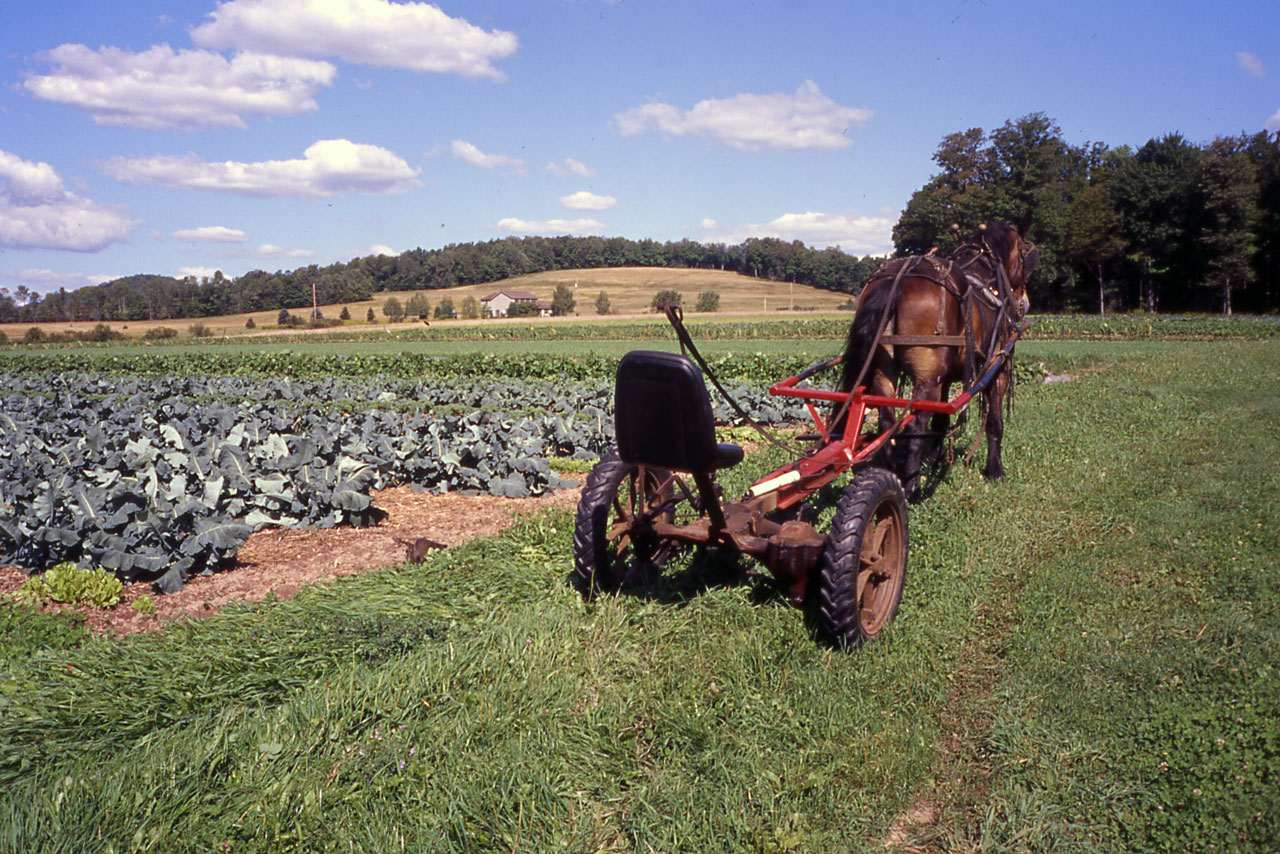 SINGLE-HORSE MOWER – Mowing cover crop of rye in pollen, rye stubble and clover, and field borders of market garden using 5-foot mower with customized Pioneer shafts. The stub tongue-and-shafts setup has been an inexpensive and easy way to experiment with going single on several different, traditional two-horse implements. However, if we stick with single-horse farming in the future, we might consider permanently attaching wood shafts to the dolly wheel frame as shown in the photos to below from Lynn Miller’s Horsedrawn Mower Book to minimize the weight on Frank’s back, to reduce draft by putting the horse closer to the mower, and to save time by eliminating the need to take the shafts on-and-off this frequently used implement. 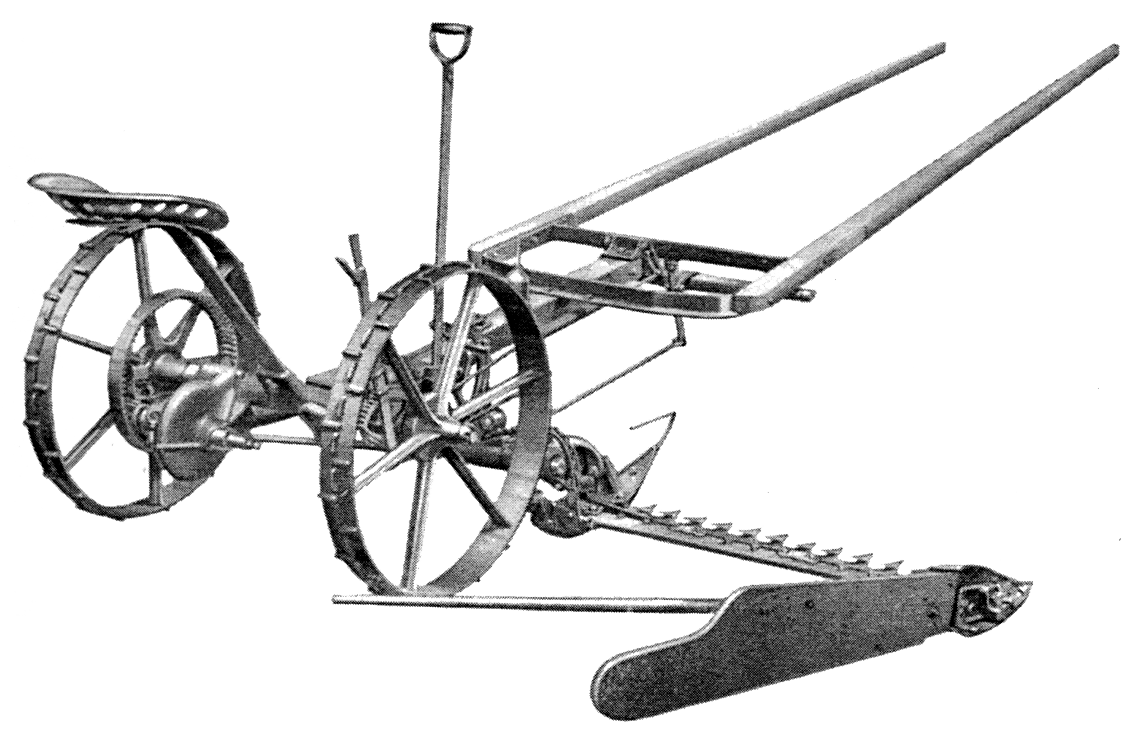 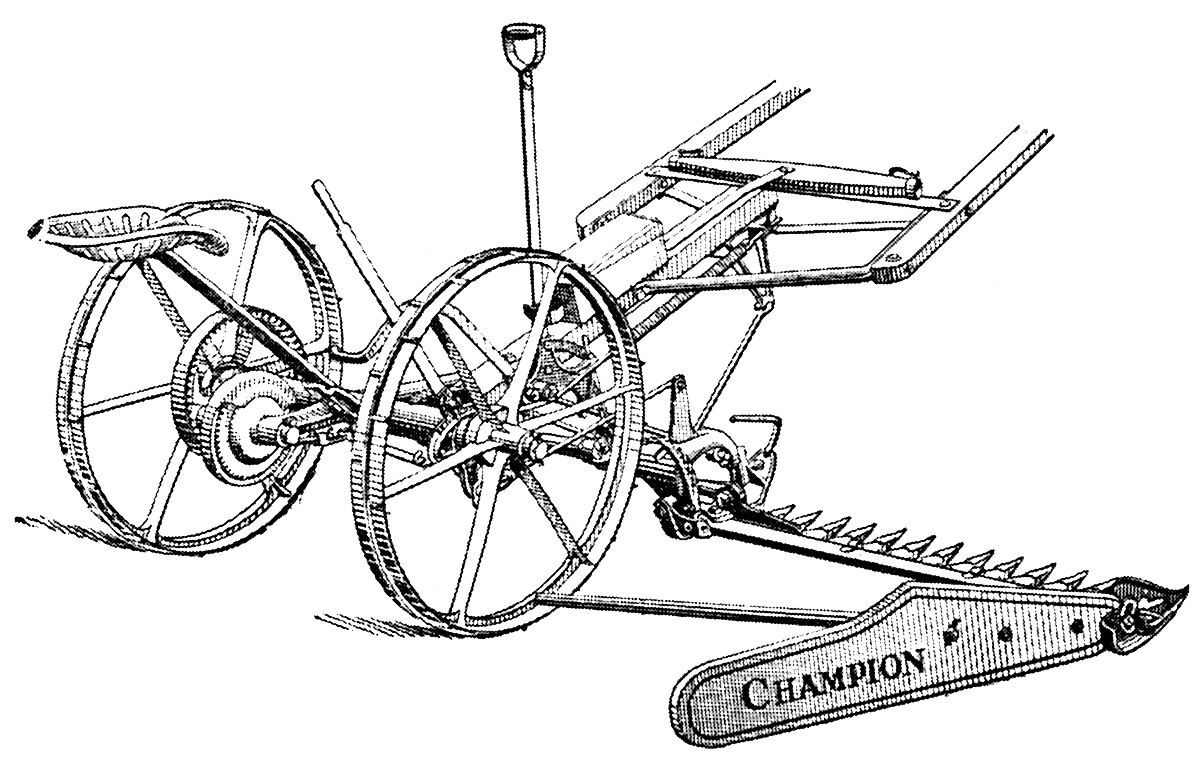 The first challenge was finding suitable equipment for single-horse market gardening. Instead of scouring the countryside for rare one-horse implements, we decided to adapt the two-horse tools we had on hand for this solo work horse experiment.

For starters, we contacted Pioneer Equipment about customizing shafts for our McCormick-Deering #7 mower. We discussed two alternatives: replace the team tongue on the dolly wheel with a stub tongue and heavy-duty bobsled shafts; or, following the example of the photos found on page 166 and 169 of Lynn Miller’s Horsedrawn Mower Book, attach shafts directly to the top of the dolly wheel frame. The second option looked like it would be less expensive but more permanent. It would also require drilling holes through the thick steel frame to bolt on the crosspiece for the shafts. We went with the first option, thinking that this convenient stub tongue setup, costing $374 plus shipping, could be used on other two-horse implements, avoiding the expense of purchasing a separate set of shafts for each tool. 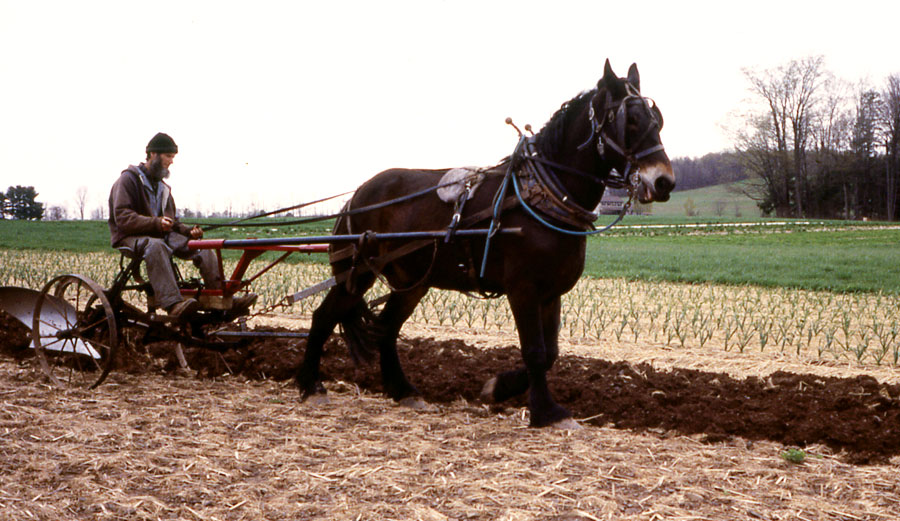 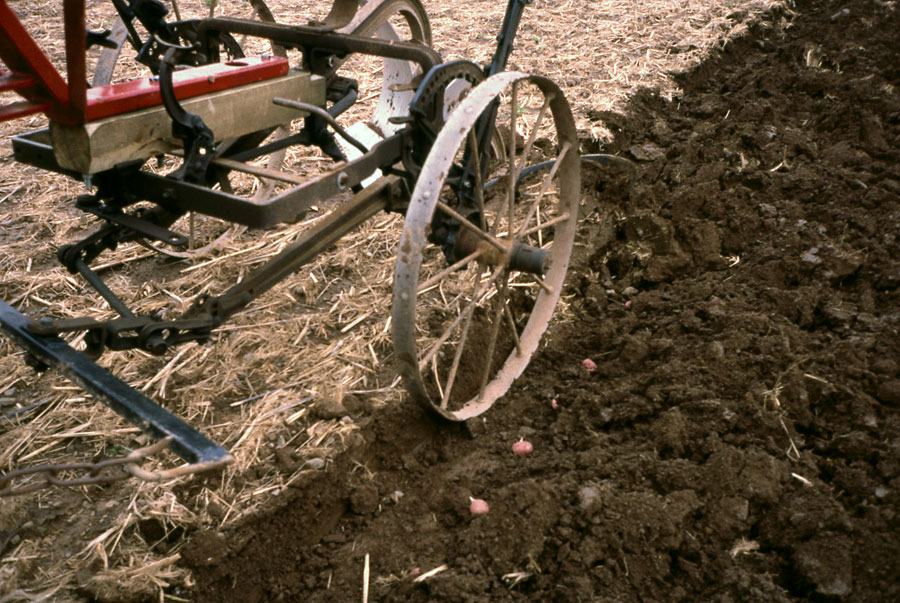 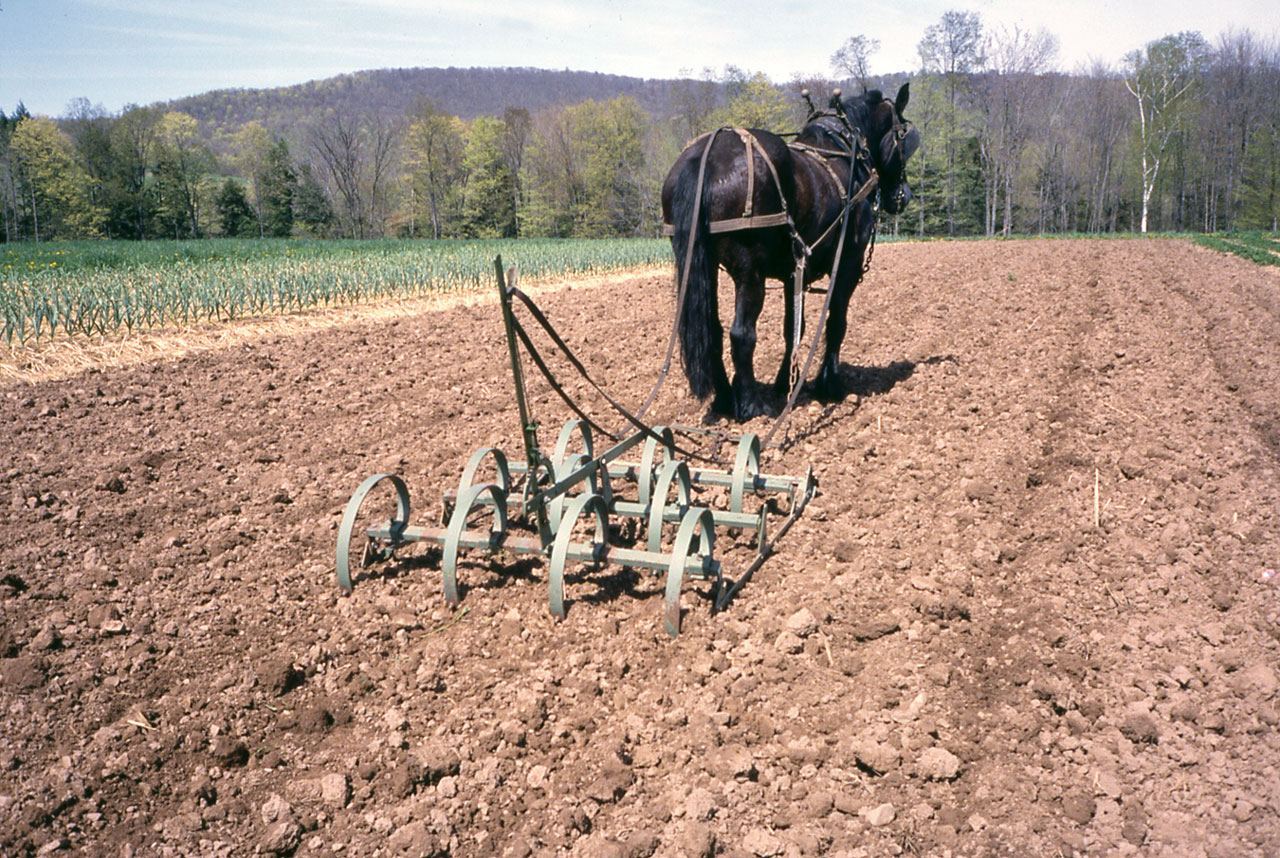 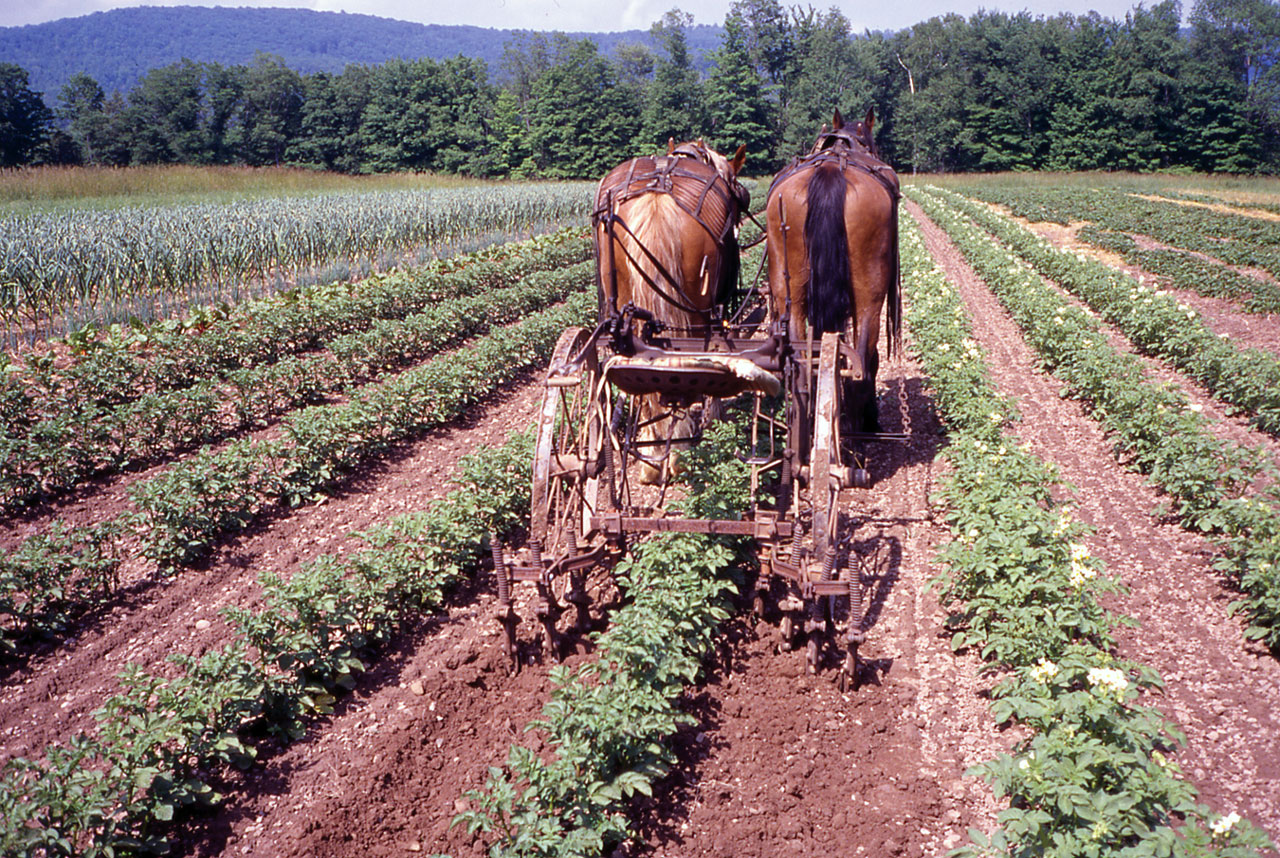 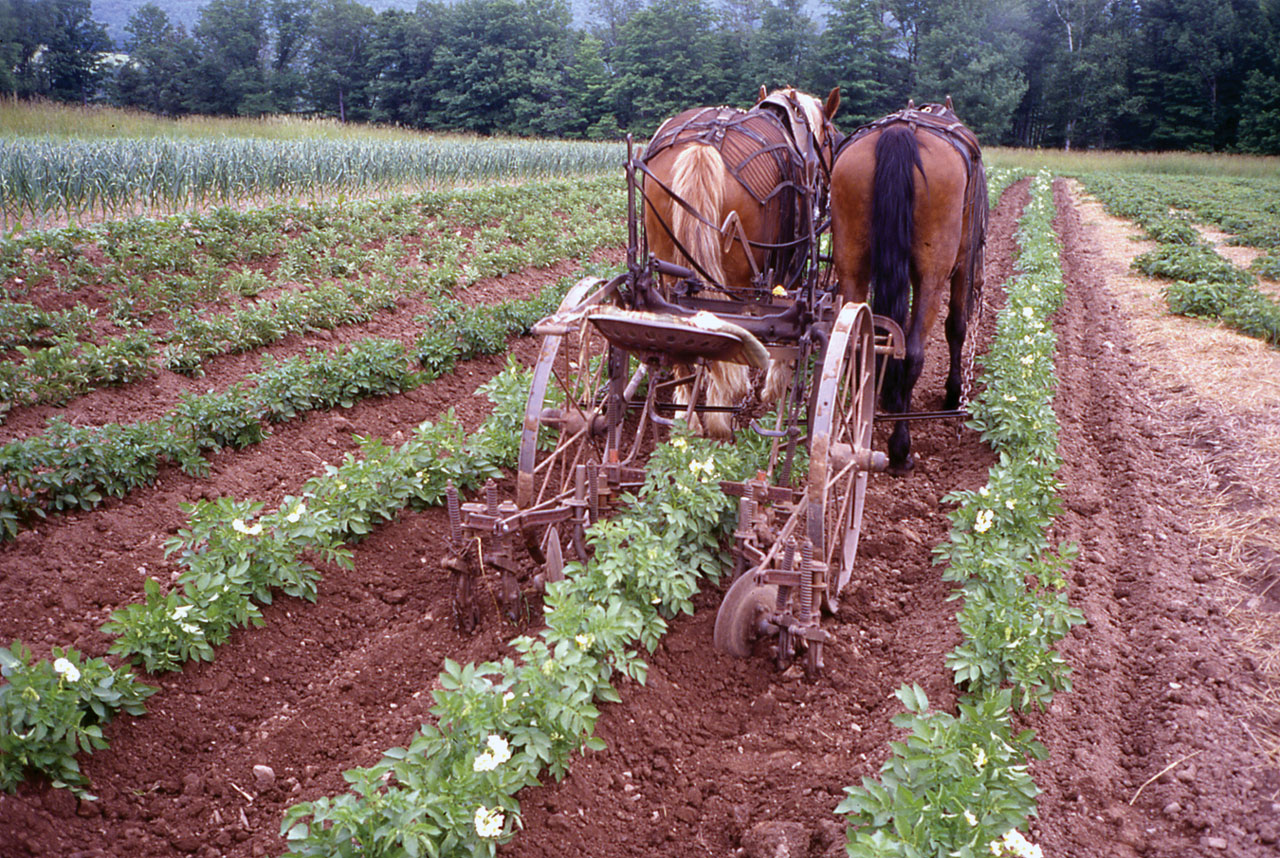 PLOW PLANTED POTATOES – From the top: Three photos of plow planting potatoes into winterkilled cover crop of sorghum-sudangrass and crimson clover on May 1; working the plowed ground on May 10 with a 4’ finishing harrow when the soil was finally dry enough for secondary tillage but before the potatoes had emerged; last two images taken on June 18 of Becky and Ben loosening the once-again rain-packed soil and then hilling the potatoes with disc hillers and straight shovels on the riding cultivator.

Despite our limited carpentering skills, we were able to shape wood stub tongues for the John Deere riding plow and the New Idea 10A manure spreader that would accept the customized Pioneer shafts, spreading this investment over three implements. However, we are still scratching our heads about how to convert our fleet of riding cultivators – tooled up for minimum-tillage, dryland planting and high-residue cultivating – to the stub tongue-and-shafts setup and straddling the rows with a single work animal.

The second challenge was developing a sustainable rhythm for working a single horse with two-horse equipment. Although mowing cover crops and pasture with the 5’ sicklebar in the brittle-dry conditions of 2010 seemed like a manageable load for Frank, we made sure to rest our racehorse-on-steroids frequently to prevent him from overdoing it. Even so, he averaged an acre an hour, the same mowing speed as the team. We also limited most work sessions to 2-3 hours so that we did not sour this willing and forgiving animal. Whenever possible, we avoided mowing uphill on the steep sidehill pasture – a hard pull for two horses and the max for a lone animal. 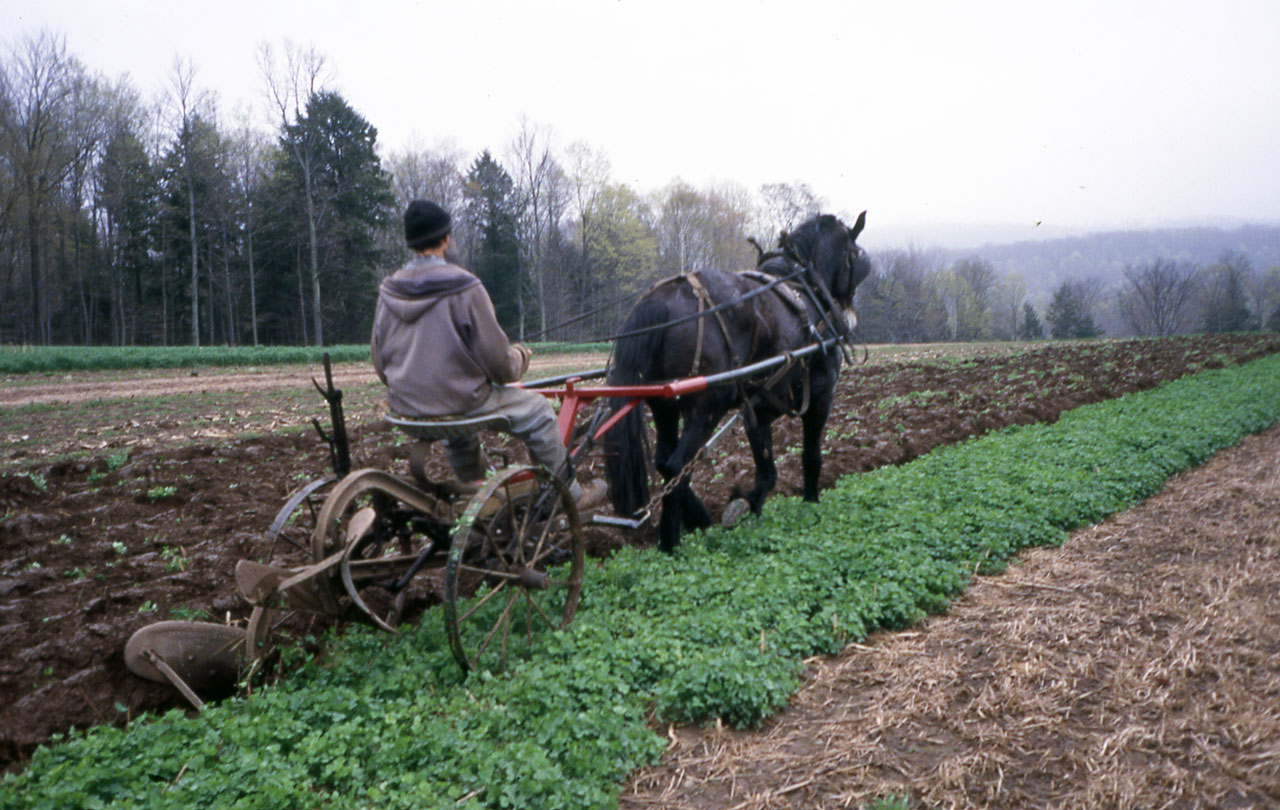 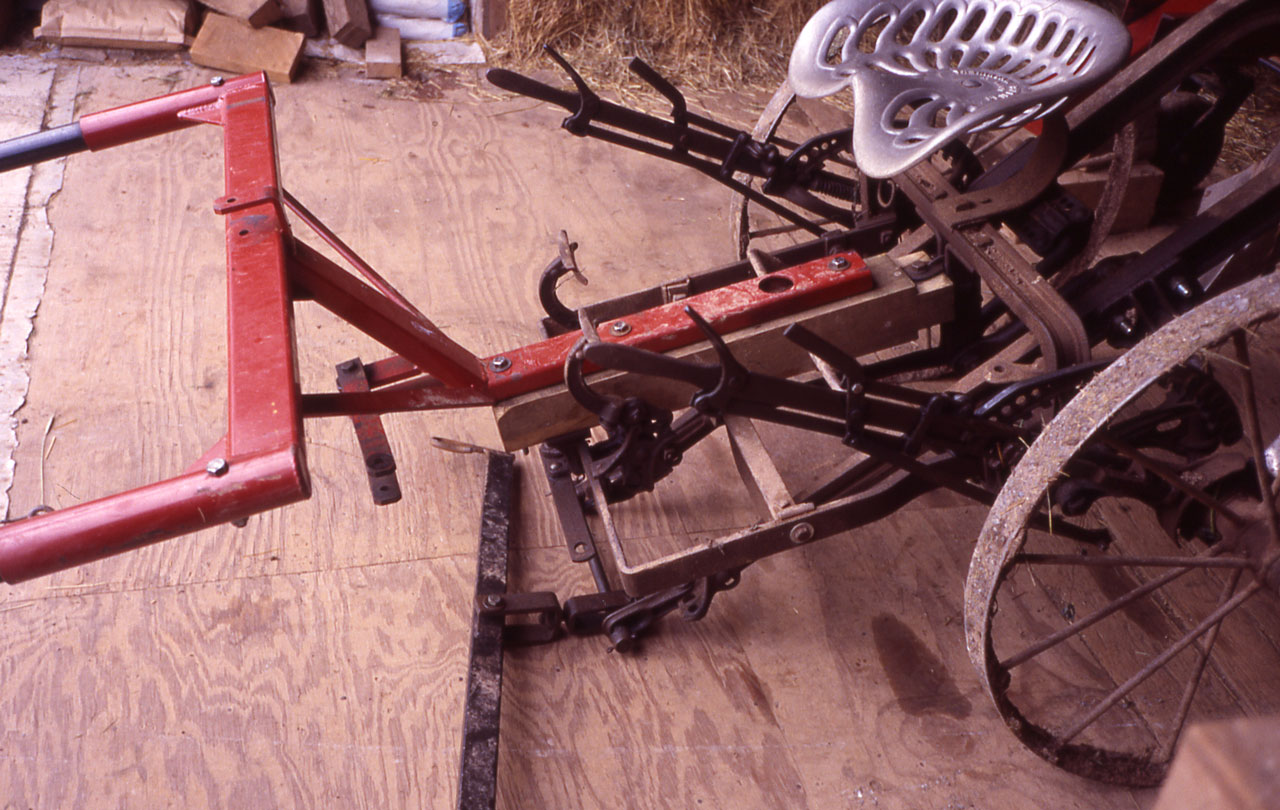 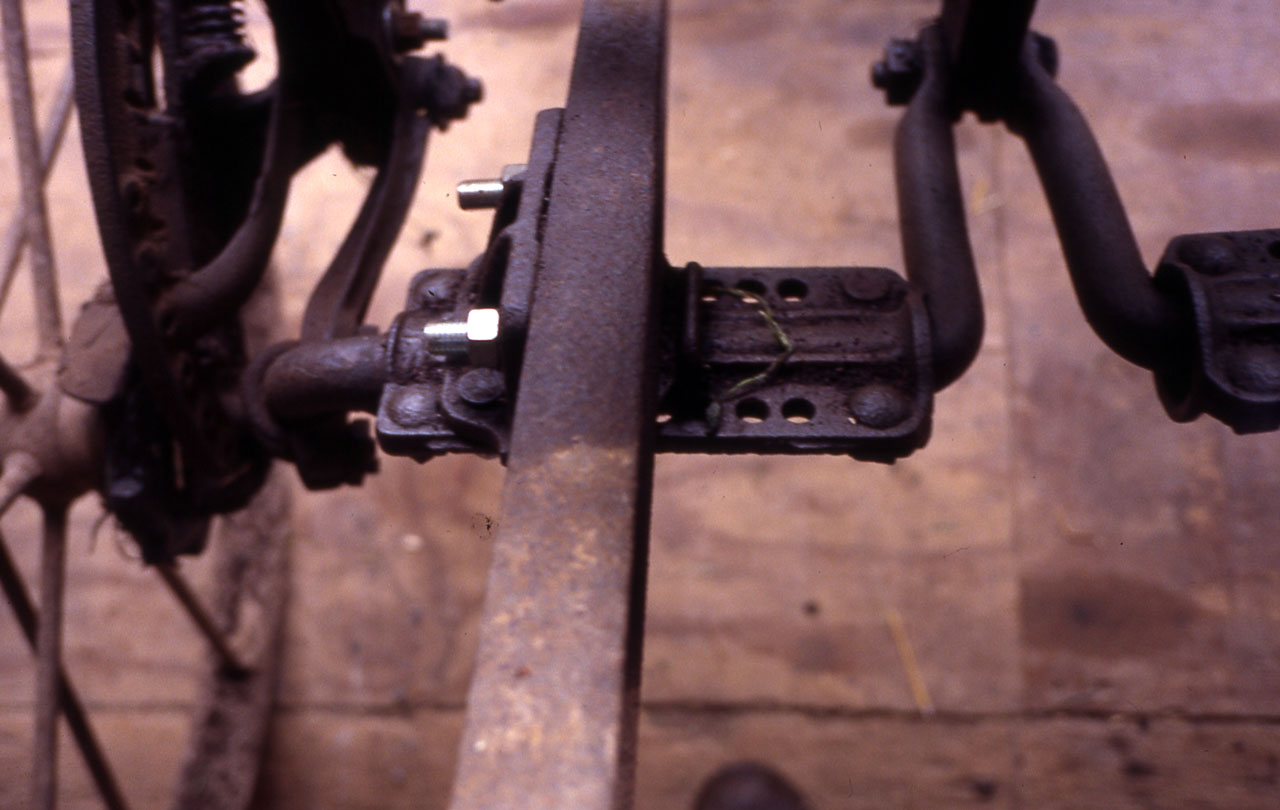 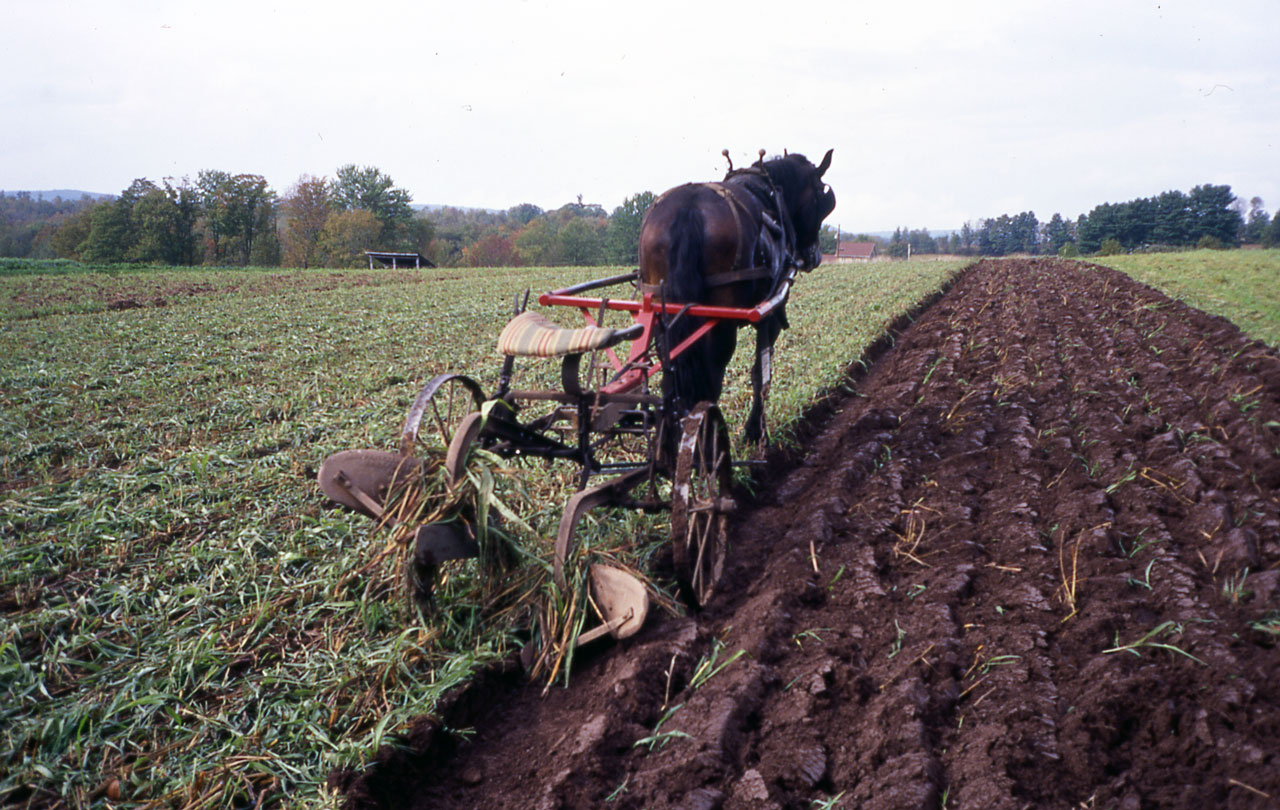 ONE-HORSE TWO-WAY RIDING PLOW – Shallow plowing medium red clover in early May was a manageable work for Frank due to the soft soil and undeveloped root system of the cover crop. For plowing the extensive root system of a sorghum-sudangrass cover crop in September, we moved the plow beams as close to the wheels as possible and replaced the 14” shares with 12” ones (see “Two Ways of Adjusting the Two Way” in the Summer 2009 CQ). Note how this cuts a narrower, steeper furrow, but still does a good job of burying the chick-weed threatening to go to seed in the understory of the cover crop. We fashioned a stub tongue for the two-way plow from the butt end of an extra-long ash team tongue. It only takes a ten minute pit stop to remove the three bolts and switch the shafts from the mower to the plow. Working alone, this task is much easier when using a handy man jack to support the stub tongue and resting the shafts on a sawhorse.

No longer hindered by Ben’s relaxed work ethic, Frank set a much faster, but steadier pace on his own. Working between the shafts also got him over some of his bad habits and encouraged him to go straight down the racetrack. We enjoyed working Frank so much by himself in the mower that we decided to try him alone for most of the heavy fieldwork in 2011.

This was probably not the ideal year to cut back on horsepower as a very wet spring and fall delayed field operations. Plus, an extended summer heat wave made the horse work more taxing than usual. Consequently, we cut corners whenever possible.

For example, we plow planted our not-so-early early potatoes during a brief window at the beginning of May when the soil was marginally fit for primary tillage. Plowing in the seed potatoes not only made up for lost time, but turned out to be a great way to introduce Frank to the two-horse two-way plow. Laying out the seed pieces by hand after turning three furrows provided him with plenty of R&R. He never broke a sweat or tried to put it in high gear. Instead, he walked slow and steady like an old plow horse. 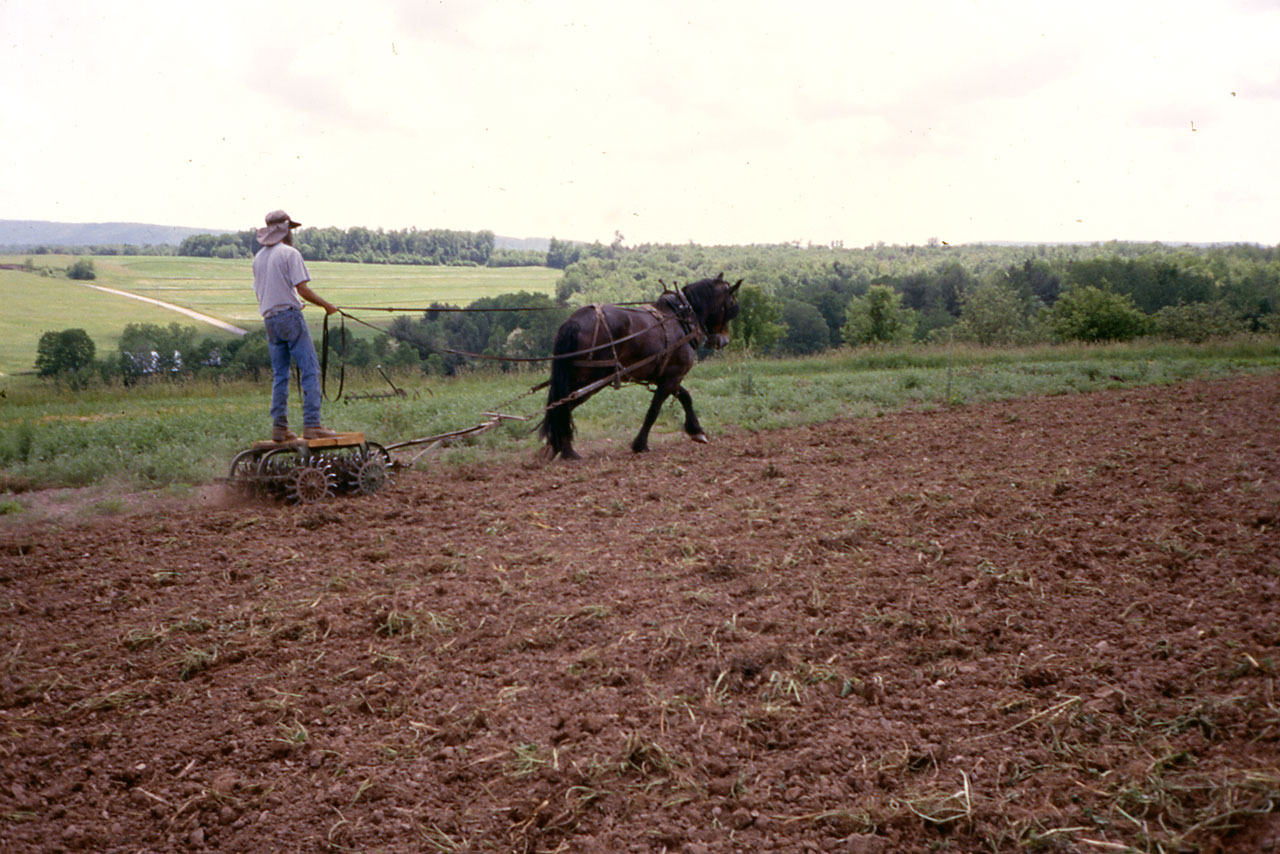 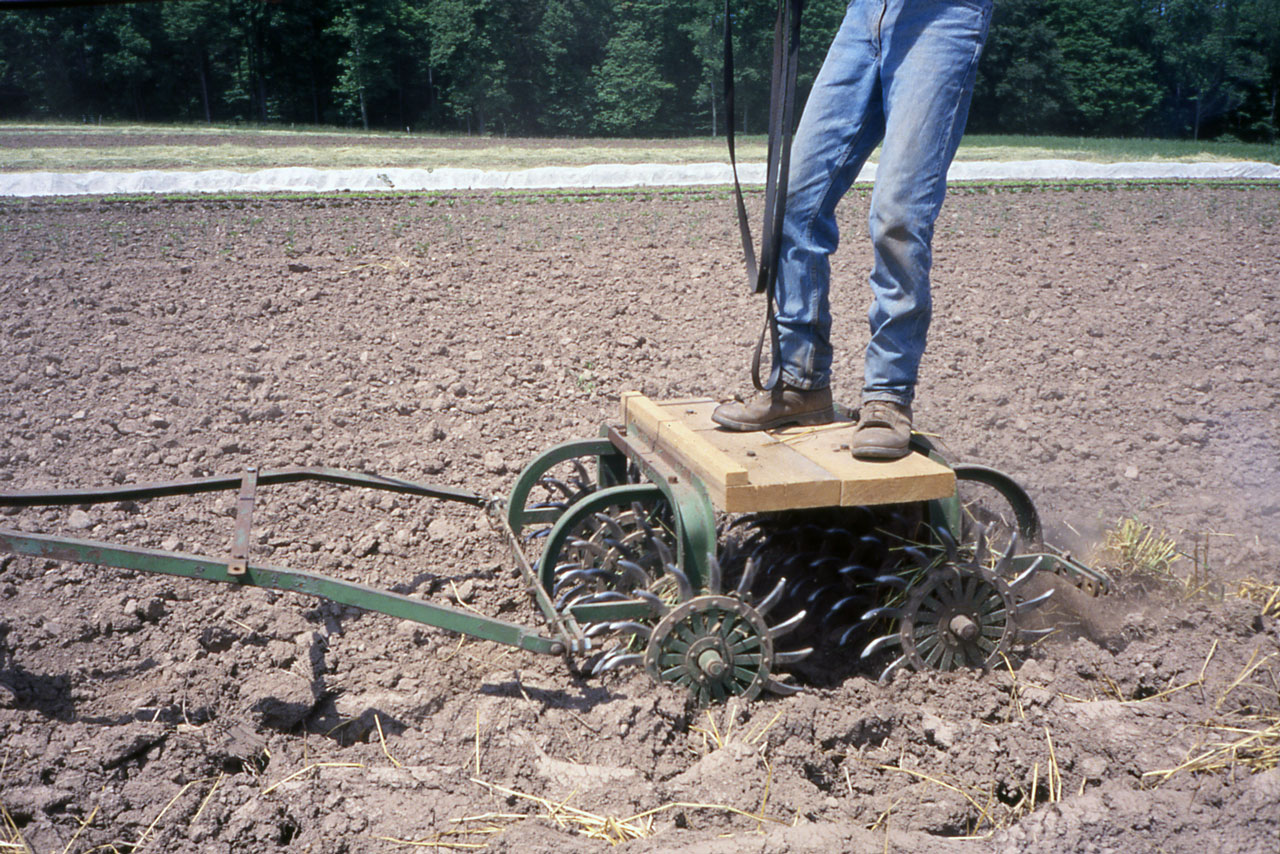 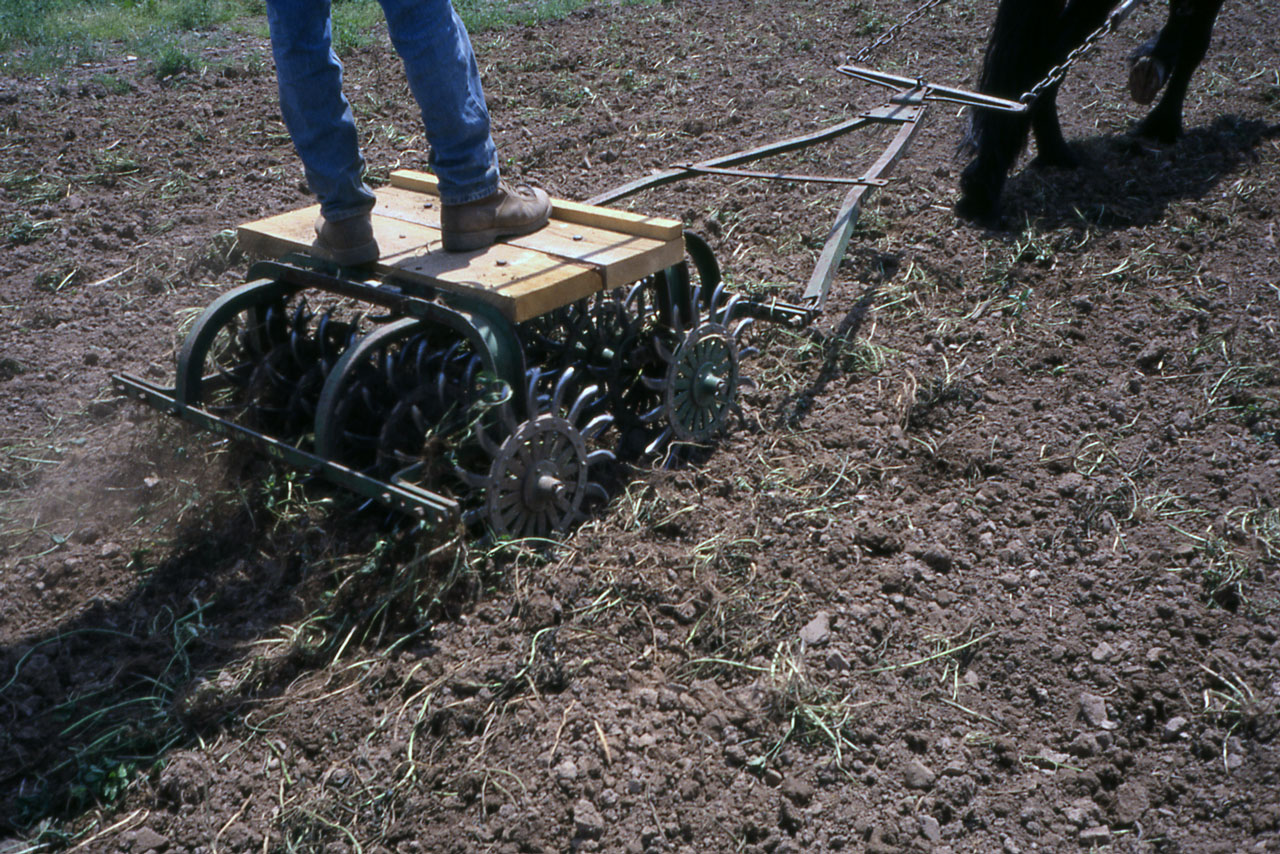 SINGLE-HORSE ROTOTILLER – In lieu of a one-horse disc, we used the middle section and hitch from our 10 1/2’ two-horsepower rotary hoe. Building a small platform to stand on saved us from trotting along after our racehorse-on-steroids, improved penetration of the spyders, and provided a good, steady pull for Frank. We like the way this single-horse rototiller settled both the horse and the soil. It did a nice job of crumbling and leveling the plowed furrows as well as finishing the seedbed after a couple of passes with the springtooth harrow.

We also took a shortcut during very wet conditions in September when reseeding a fallow field where lots of chickweed threatened to go to seed in the cover crop of sorghum-sudangrass. We broadcast rye seed directly over the plowed sorghum-sudangrass, then followed with the springtooth harrow and rotary hoe to level the furrows and incorporate the seed. This abbreviated secondary tillage made it possible to get a uniform, weed-free cover of rye established during a small window of opportunity using a single horse. Nevertheless, working in the cover crop seed with a single 3’ section of springtooth harrow (one pass) and rotary hoe (two passes) required 2 1/2 hours with Frank in the heavy, humid weather, double the amount of time for secondary tillage with the team using a two-section (6’) harrow and full-size rotary hoe.

By contrast, pre-plowing preparation of the half-acre fallow field took no longer for one horse than two: a half hour for mowing the sorghum-sudangrass and 2 3/4 hours for spreading compost. If harnessing and hitching are factored into the labor equation, these jobs actually go faster with the solo work animal. Plowing the wet, heavy ground (3 1/4 hours) with Frank added a half hour to the normal team time due to cutting a 2” narrower furrow and resting Frank after each pass. 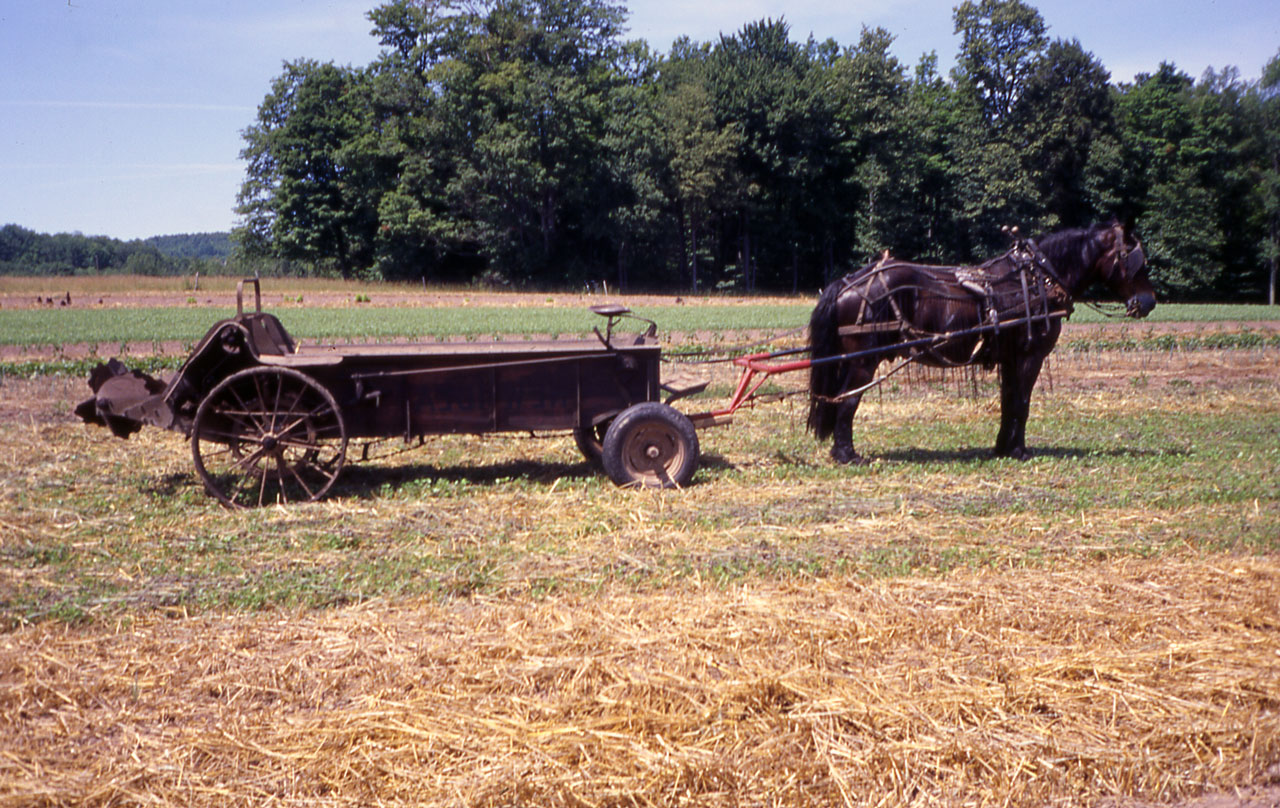 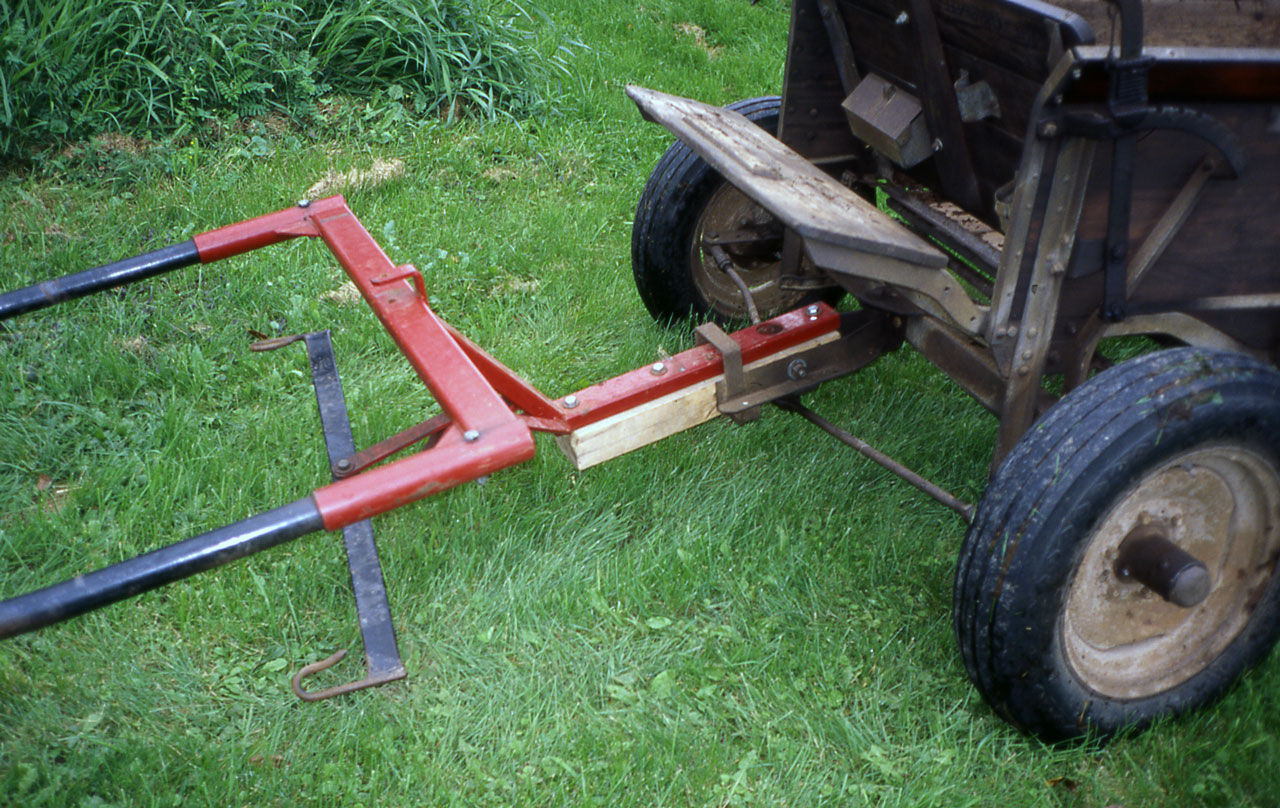 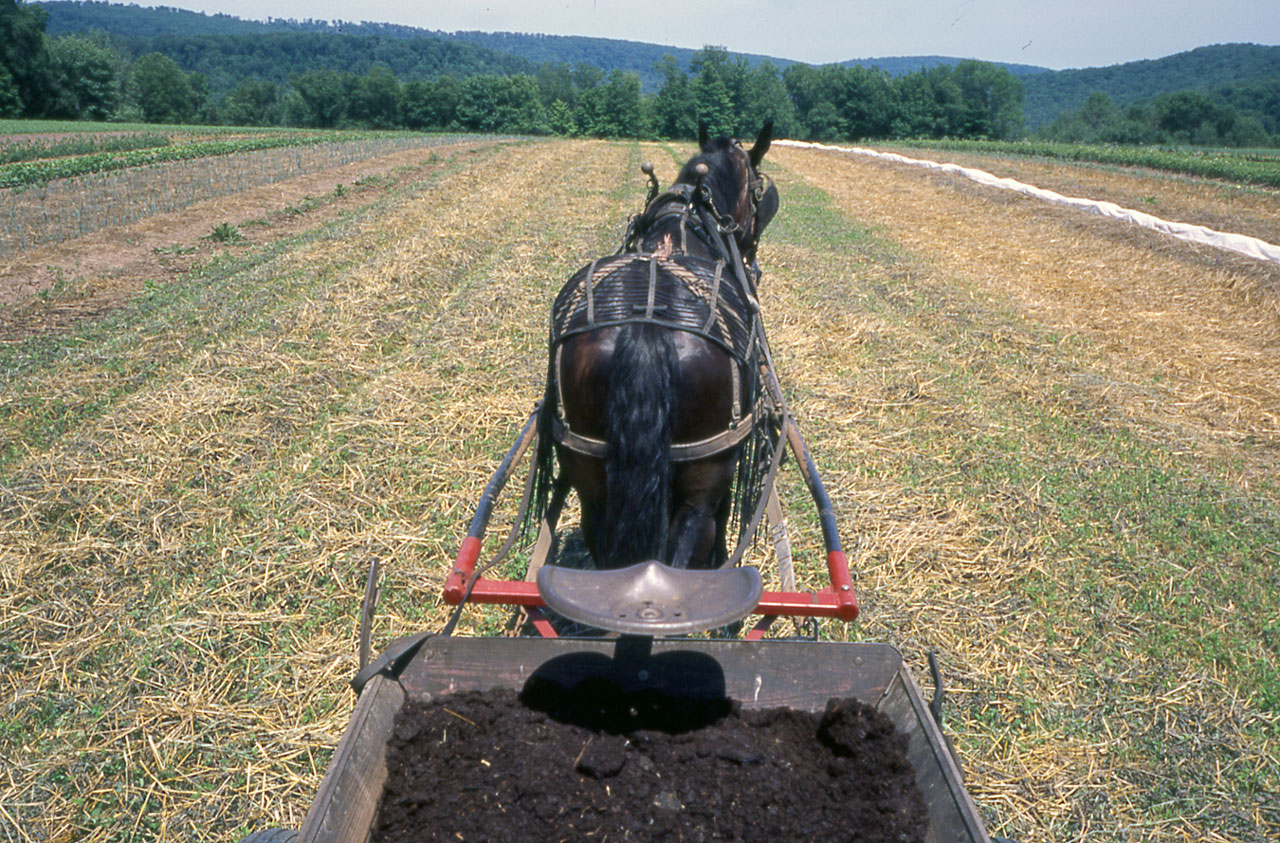 COMPOST SPREADING WITH ONE WORK ANIMAL – We did not get around to making a stub tongue for the manure spreader until midsummer, partly because we were concerned that this might be too much of a load for a single work animal. Although Frank definitely had to work to back the New Idea 10A spreader into the stables for loading and then pull it up the long hill to our vegetable fields, he had no problem spreading the compost. In retrospect, we should have realized that the fine-textured, hog composted horse manure would have required relatively little horsepower for spreading with this ground-driven implement. In addition, we only fill the spreader 3/4 full to achieve our desired application rate of 6-8 yards/acre, and Frank gets to rest more than half of the time while we load the spreader by hand.

Clearly two horses are better than one for secondary tillage. In the future, we may go back to harrowing and rotary hoeing the soil with the team because secondary tillage comprises the lion share of heavy fieldwork in the bio-extensive market garden. We use it for bare fallow management, preparing a seedbed for vegetables, and seeding down cover crops.

However, we did not regret the extra laps around the fields with our racehorse in 2011 because going single put the fun back in farming with Frank. It was well worth the extra time to restore a working relationship with this unique animal and to realize more of his full potential.