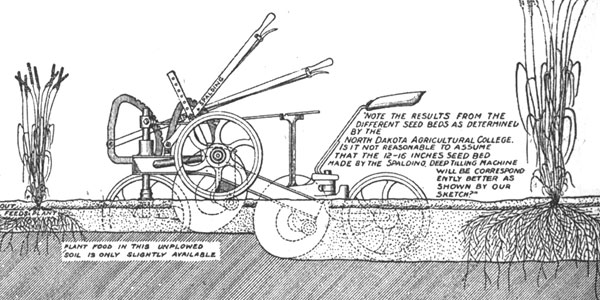 edited by Anne and Eric Nordell of Trout Run, PA

The structural management of a clay soil is not such a simple problem as that of sandy one. In clays and similar soils of temperate regions the potential plasticity and cohesion are always high because of the presence of large amounts of colloidal clay. When such a soil is tilled when wet, its pore space becomes much reduced, it becomes practically impervious to air and water, and it is said to be puddled. When a soil in this condition dries, it usually becomes hard and dense. The tillage of clay soils must be carefully timed. If plowed too wet, the structural aggregates are broken down, and an unfavorable structure results. On the other hand, if plowed too dry, great clods are turned up which are difficult to work into a good seedbed.

The granulation of fine-textured soils should be encouraged by the incorporation of organic matter. In this respect sod crops should be utilized fully and the crop rotation planned to attain their maximum benefits. The data in Table 3:6 from an experiment in Iowa show the degranulating influence commonly attributed to corn. The effect is less rapid, of course, when the crop is grown in a suitable rotation. The aggregating tendency of sod, whether it is a meadow mixture or a bluegrass sward, is likewise obvious. The data also suggest the degrees of soil granulation normally expected and disclose the rapidity with which aggregation may decline…

On soils with extreme textural makeup, high manure applications may be required. The water-holding capacity of very sandy soils can be increased with heavy manure applications. Likewise, the structural stability and tilth of heavy plastic clays is sometimes dependent upon heavy organic applications. In both cases, the physical effects of manure justify its use.

First of all, let me thank you for taking the time to respond to my letter to the SFJ (about locating a double disc plow). As I mentioned in my letter, my experience is that of a gardener, not a horse farmer. So I have read your SFJ columns with great interest, especially the cultivation and summer fallow ideas.

What I have done is a lot of work building up my topsoil. It is a very tight clay soil, fertile but lacking tilth or organic matter. The topsoil is a dark color, about 13 inches thick. The subsoil is a brown clay, and there’s a scattering of stones and rocks lying right on top of the subsoil.

To break up the clay, I have added tons (no kidding) of sand, peat moss, and manure. The only way to mix it all up is with double digging techniques, like Jeavons advocates. The soil is becoming more like a loam texture as a result. Now across the street my neighbor (a very decent fellow) farms over 80 acres with petrol-based means: Round-Up, heavy equipment, etc… The result is that all, and I do mean all, of the original topsoil is gone. There’s just the subsoil left. Without artificial fertilizers, weeds would have a hard time growing there. It’s all too apparent to me that this way of “farming” is not sustainable.

The double disk plow seems like a way to replicate the double digging technique on a farm scale. Too bad they are so rare! My root crops have done quite well, taking advantage of the loose soil. I have parsnips reaching down 15 inches, and as big as a fist.

I do follow cultivating schedules similar to what you use on a larger scale, by hand tools. Lots to learn!

HOW TO HANDLE FINE-TEXTURED SOILS

If your garden soil is high in silt and clay, slow to dry, sticky when wet, and inclined to crust, you can do five things to improve it or to “learn to live with it.” These suggestions will help the surface soil but not the subsoil.

Thank you for encouraging me to write about our little operation. I have thought about it for some time. I have been unsure about what angle to take. We are very much in the formative stages – still bringing land into production, building outbuildings and greenhouses, and developing rotations. I suppose since so may other folks are just starting it would be valuable to hear this story of transition from old ground (one acre with rototiller to ten acres with horses).

About clay: I have not had the success I am seeking yet. I think the key is to keep the organic matter of the cover crops in the surface. As I have been bringing fields into production I have to plow deeply to effectively eliminate dandelions and very old, thick rooted alfalfa. In one particular field slated for garlic planting fall of 2001 I grew cover crops of barley/sweet clover, bare fallow, buckwheat, and then a thick, late, low planting of barley. I thought I had prepared so well. However, last year’s garlic was disappointing. The crop did not size up well – indeed some cloves were misshapen due to compression from heavy soil. I believe now that I would have seen better results if I had skim plowed or disked. I did disk the buckwheat in, but there wasn’t a lot of biomass there. Frost threatened before it put on as much growth as I had hoped.

When planting garlic last fall I tried a new technique to hopefully help with the clay compaction problem. After plowing down a good stand of alfalfa I utilized a bare fallow to bring quack grass under control. In August I spread 16-year-old dairy manure and plowed deeply to put this organic matter in the root zone and eliminate stray dandelions and alfalfa. Then I applied another thick coat of the aged dairy manure, this time disking it in. The double application left the whole 6 or 8 inches of soil with a distribution of organic matter. Then I formed planting beds with disc hillers on the cultivator (hilling or ridging has helped keep the soil looser than in flat fields). Not wanting to take chances, I dug a planting furrow, planted cloves, and filled in the furrow with horse manure compost hoping to keep the developing garlic head surrounded by a cozy blanket of organic matter. I mulched with grass clippings and now anxiously wait to see the outcome. The extra work of shoveling all that compost is not something I would want to do forever, but until my soil loosens up I am willing.

I performed an accidental experiment last fall which convinced me that another key to improving the tilth of clay soils is growing a cover crop with a good fibrous root system and leaving it in the surface when incorporating. I put up two new hoop houses last August. In the space slated for the houses I had planted a barley cover crop. Due to a problem with my irrigation, a portion of the cover crop did not germinate. Prior to putting the plastic on I used my walking tractor (since retired in favor of hand tools for greenhouse work) to incorporate the cover. Where the barley was (only 6 or 9” tall) the tiller sank in deeply and churned up the organic matter into a fluffy mass. Where there was no cover the tiller bounced away, unable to make a scratch. Then, when making the beds, I had loads of fluffy, soft soil to work with. I cannot emphasize enough the difference the cover crop made.

I am finally getting to the point where I have enough fields in production to allow four fields (1/2 acre each) to be fallowed for a full year with surface incorporation planned for all cover crops. I will be excited to watch the results. I am hopeful.

A summer planting of sudangrass was the best single-season cover crop for relieving soil compaction in vegetable fields, a team of Cornell researchers found. Yellow mustard, Hubam annual white sweet clover and perennial ryegrass also were effective to some extent in the multi-year study. “But sudangrass has proven the most promising so far,” says project coordinator David Wolfe. “It has shown the fastest root growth.”

Sudangrass is particularly effective when it is mowed once during the season, Wolfe adds. Mowing strengthens its deep, penetrating root system while the above ground biomass adds to soil organic matter.

Farmers and researchers have long known that alfalfa’s deep root system is a great compaction-buster. But most vegetable growers cannot afford to remove land from production for two to three years to grow it, notes Wolfe. Many also lack equipment to subsoil their fields, which is often a temporary solution, at best. That’s why Wolfe geared his study to identify covers that can produce results in a single season. In the case of heat-loving sudangrass, it also may be possible to squeeze a spring or fall cash crop into the rotation while still growing the cover during the summer.

In recent years, the topsoil layer has been greatly reduced. This is not all a by-product of chemical fertilizer, but is related to bacterial action. If bacterial numbers are reduced, they will take up less “space” and no longer work to flocculate or loosen the soil. As their numbers continue to fall, the topsoil layer will continue to degrade, and compaction will increase.

Aerobic bacteria require air (oxygen) and also calcium. Calcium, as will be discussed later, is found in lime. As agronomic advice has stressed the use of potash, it has tended to neglect calcium levels in the soil, especially if the soil pH was in acceptable levels. Clay soils require calcium in order to naturally flocculate or loosen. As increasing amounts of potassium in the form of potash is applied, the potassium occupies the place intended for calcium on the clay colloid. The clay colloid, devoid of the proper amount of calcium, then begins to “flatten out,” taking up less space, contributing to soil compaction and eliminating air spaces. This same result may occur with the addition of dolomitic lime and/or excessive magnesium. The soil pH rises but no one suspects a deficiency in calcium. Not only does calcium reverse this process, but calcium is a major nutrient required to produce a response by aerobic bacteria.

The lack of aerobic bacteria also results in a reduction in soil humus content which means even less material to loosen the soil.