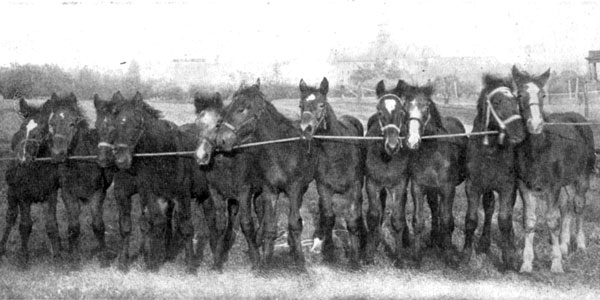 The general practice of Pennsylvania farmers in buying rather than producing horses for farm work is justified by the statement that horses can be bought cheaper than they can be produced under eastern conditions. During October, 1910, The Pennsylvania State College and Experiment Station purchased a group of ten grade Belgian and Percheron colts and one pure bred Percheron for use in live stock judging classes. An accurate record of the initial cost, feeds consumed and changes in form has been kept in order that some definite information as to the cost of developing draft colts from weaning to maturity might be available for farmers, investigators and students. The handling of animals in this way is probably more expensive than handling them for market purposes but it has an advantage in that the results are not apt to prove misleading when applied to farm conditions.

During the first winter the colts were divided into two groups, one of four, the other of six individuals, and allowed to run loose in two large box stalls. They were turned out twice daily for water, and occasionally led from the College Barn to the Agricultural Building, a distance of one-quarter of a mile, for use in the class room. Otherwise they had no exercise, as suitable enclosures were not available. Each group was fed a ration of five pounds per head daily in two equal feeds from a grain mixture of five parts shelled corn, three parts oats, two parts wheat bran, one part linseed meal, weighed and mixed in bulk. This amount of grain was fed until the end of the third month, when it was increased to seven and one-half pounds per head daily. No further increase was made throughout the winter. During the first half of the winter the group of four colts received a roughage ration of corn silage in the morning and hay in the evening. The average amount consumed per head during this period was 8.2 pounds of silage and 7.4 pounds of hay. The other group received the same grain ration and 10.6 pounds of hay without silage. During the last three months of the winter period the grain was increased to 7.5 and the hay to 13.1 pounds per head daily in each group. With this method of feeding, all the colts came through the winter in excellent condition of flesh, having gained 244.27 pounds per head during the winter feeding period of 168 days.

The summer feeding period included 196 days, starting April 19 and ending November 2, 1911. All colts were placed in pasture lots on May 4; five days later the fillies were removed to a larger pasture and allowed to range during the day and were placed in the barn lot at night. The four stallions were kept in a small pasture of four acres and were allowed to stay only 4 to 6 hours daily in this lot. The amount of grass was limited, and was therefore supplemented with grain and hay for all the colts. The larger portion of the hay was consumed by the four stallions. The pasture was supplemented to some extent with a soiling crop of green, mixed hay. During the last two weeks of August the four stallion colts were kept in the pasture lots at night, and tied in the barn during the day, in order to protect them from heat and flies.

Seven pounds of grain mixture were fed to all colts up to May 9, at which time the fillies received oats. The stallions received the grain mixture up to May 26, when oats were substituted. The stallions consumed their full complement of feed, but the fillies, due to being on better pasture, consumed only three to five pounds of oats per head daily, until the latter part of August when they consumed eight pounds.

From July 13 to 18, the fillies received no grain and the stallions were fed corn, as oats were not available. On September 7 and until the close of the summer feeding period, corn and oats were fed in equal parts by weight, each colt consuming eight pounds per head daily.

The total cost of feeding during the summer period was $27.45 per colt. This amount is twice as much as necessary where good and sufficient pastures are available. The four stallion colts consumed practically no grass and their maintenance and growth were derived from the grain and hay provided for them. The six fillies had a heavier supplement of grain than colts would consume ordinarily when placed on good pasture. For the development of draft horses, it is desirable to have them receive the greatest possible growth and development when less than two years old. Therefore, draft colts on pasture should receive as much grain as they will consume. With better pasture their appetites for grain are very materially lessened; therefore, in raising draft horses, one factor of reducing the cost is a sufficient amount of luxuriant pasture.

As new corn was not available until December 1, the grain ration during November was largely oats, after which a grain mixture of six parts of shelled corn, two parts of oats, one part of wheat bran, one part of linseed meal, was used throughout the remainder of the test. During the first half of the winter, grain was fed at the rate of 8.4 pounds per head daily, after which it was increased to 10 pounds (where it remained stationary) until the close of the test. The hay fed during the same period amounted to 16.6 pounds and 17.5 pounds, respectively. The colts increased 219.25 pounds in weight during the second winter, and the weight at the close of the test, when approximately 23 months of age, was 1316.9 pounds per head. During the second winter, all colts were tied in single stalls. Because of ice and snow in the small exercise lots, it was thought that the risk assumed in turning them out would be greater than that of keeping them tied. They remained in good health and spirits throughout the entire winter and were broken to harness during the early spring months.

Table I is presented in order to show the amount of feed consumed during different periods. It will be noticed that an increase of 60 percent in grain and 45 percent in roughage was consumed the second winter over that consumed during the first winter, although there was a decrease of 10 percent in the increase in weight, as shown in Table III.

The cost of feeding each individual during the first winter was $26.59, during the second, $38.99, an increase of $12.40 per head. The average cost of feed per head for the first year after weaning was $33.97. These figures are based upon the average value of feeds for the period during which the test was in progress and are materially higher than the average of the past ten years. The method of feeding resulted in the use of slightly more than one and one-half times as much grain as roughage.

Table II shows the weight of each individual at the beginning and close of the test, also at the beginning and end of the summer periods. The average gain during the 532 days was 720.09 pounds per head. No effort was made to secure extreme weight, but the colts were kept in good growing condition. The smallest individual gain was 665.9 pounds by Colt No. 23; the largest 806.2 by Colt No. 30. The average daily gain gradually decreased as the age of the colts advanced and as they approached maturity. It is important in the development of draft horses that they progress steadily from birth to maturity without any period of semi-starvation, either during summer or winter, which indicates the necessity of varying the amount of grain as the available supply of roughage and pasture is either increased or decreased.