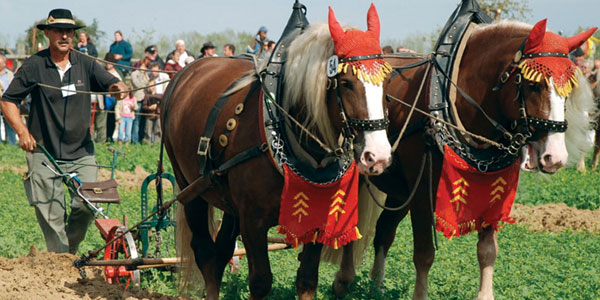 by William Castle of Shropshire, England
with additional photos by Diana Zeuner

Whilst on a trip to Germany at the end of August I took the opportunity once again to visit Pferdestark, the biggest gathering of work horses in Europe, which takes place every other year in the north German town of Detmold. Pferdestark is a honey pot for people from across Europe interested in the practical application of live horse power, as well as those who just like to see the big horses, so by the time I arrived half an hour before the start, visitors from far and wide were already flooding onto the site around the old post windmill overlooking the open air museum and the town. Over the next two days more than two hundred horses took part in the driving, logging and ploughing competitions, the equipment demonstrations and the main ring attractions which included draught horse football and a Dutch game where the riders have to spear a suspended ring whilst riding at a gallop.

But my main interest was to see the horse drawn machinery, and the changes and developments in technology since my last visit. But the biggest change was actually on the way to Pferdestark, travelling by train through the north German countryside, where since my last visit the number of electricity generating windmills has increased dramatically, as Germany makes strides to meet its responsibilities in tackling climate change. At Pferdestark itself, of course, an older form of renewable power was centre stage, as the horses and mules showed what they could do. Although in mainstream society working animals scarcely figure in the moves to reduce our impact on the planet, many of the people at Pferdestark are involved with working horses partly for environmental reasons, whether it be working on organic or biodynamic farms, or in areas with nature conservation status, including woodland and forestry. And it was also this group of people that were behind many of the improvements in animal drawn machinery at this year’s event.

For anyone familiar with recent developments in horse drawn machinery, none of the innovations this year were particularly earth shattering [pun intended] or radical in concept. And that is probably how it should be, as when working with natural processes and limited power, we know that small changes can make a big difference. So I was just as interested by the gradual developments and improvements to existing designs made in response to experience in the field, as the completely new machines.

In contrast to North America, where some of the machinery is produced by manufacturing companies, most of the equipment presented at Pferdestark has been developed by individuals who have a passion for working horses and a flair for engineering, but some had been put together collaboratively by groups of people who share a common aim. In their commitment to producing worthwhile pieces of kit despite the market here being small, these designers and engineers are providing a very valuable service to those of us who use horses. We are lucky to have them.