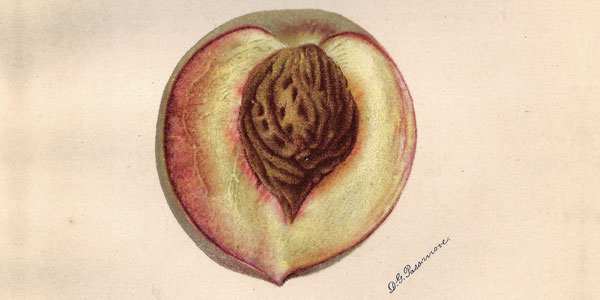 During the golden age of agriculture, 1910 through 1916 as some identify, the annual USDA Bulletins ran a semi-regular Promising Fruits chapter which featured new varieties. This is one of those entries. The color plates, as you can see, were marvelous. And the ‘descriptions’ – Oh My! LRM

The so-called “Spanish” group of peaches, which is supposed to have been introduced into both Mexico and our own Gulf region by the early Spanish explorers and missionaries, is in some respects our most interesting group of peaches. It unquestionably attained wider distribution in the United States during the period of exploration and colonization which preceded the development of commercial peach culture than the so-called “Persian” group, to which most of our older cultivated varieties belong.

Hunters and trappers, and even the Indians, appear to have aided in the dissemination of these peaches in many sections, so that the early settlers in many parts of the Mississippi Valley and the Upper Lake regions found the type so firmly established in certain localities as to appear indigenous. From the Gulf to the Great Lakes it was thoroughly established by the beginning of the nineteenth century, reaching its northern limit of planting in orchard form, so far as known to the writer, in the so-called “Indian peach orchard” on the Kalamazoo River, near the present village of Douglas, Mich., where a bearing orchard of 300 trees was found by the settlers when they reached there, about 1834. In the mountain regions of southwestern Virginia, western North Carolina, and eastern Tennessee there are numerous seedling orchards of the type still in existence, and it is a significant fact that in recent years nurserymen throughout the Northern and Eastern States are turning to that region for sound and disease-free seed for planting.

Notwithstanding the early introduction and wide distribution of the type under such names as “Indian Peach,” “Indian Cling,” “Squaw Peach,” etc., it has given rise to but few varieties that have been considered worthy of perpetuation by budding. The “Columbia,” which Coxe originated in New Jersey from a seed taken from Georgia, was for many years after its description in 1817 apparently the only described variety. At the present time there are but few varieties, and most of these are restricted in their planting to the region in close proximity to the Gulf of Mexico, to which they appear to be better adapted than those of any other group. None of these has yet attained distinct commercial importance, but several are highly esteemed for home use. A marked characteristic of this group is that certain individual trees have a long blossoming period and a correspondingly long season in which the fruit matures. It is this that gives special value to the “Everbearing,” a variety which originated about 1885 in the garden of a Mrs. Page, at Cuthbert, Ga. Blossoming, as it does, through a period of several weeks, it rarely fails to set a fair crop of fruit, while the fruit in turn ripens through a period of from six to twelve weeks on the same tree.

The variety was named and disseminated by the P.J. Berckmans Company, of Augusta, Ga., in 1897. It has been found insufficiently hardy in New Jersey, but is considered worthy of planting for home use throughout the recognized peach districts of the South. It is not recommended as a commercial peach, as the peculiar color and long ripening season would doubtless prevent it from becoming a profitable market sort.

The specimen illustrated on Plate LXI was grown at Augusta, Ga.