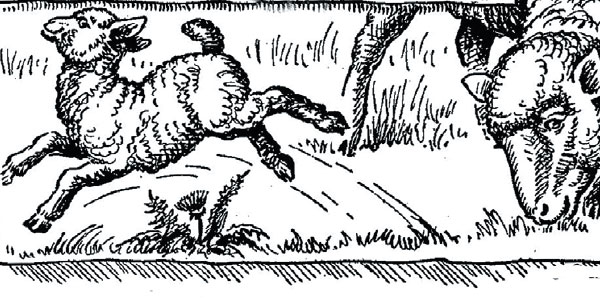 by Lisa Winslow of Harrison, ME

After living in Ohio for twelve years and being very home-sick, I was ready to get home, spend time with my family and friends, and get back to the farm. The question arose, can one really come back home? When I lived in Ohio and asked myself that question the answer was adamantly, yes! Now that I was here… I wasn’t so sure.

The farm and home are synonymous for me. When I lived in Ohio I wrote about growing up on the farm to keep the farm close. I wrote about my memories. I guess I thought when I got back to Maine I could pick up where I left off, even though most of those memories were from when I was a child, daddy’s little girl. I’m in my forties now, a woman, yet still and always a farmer’s daughter.

Dad and I decided to get back into the sheep business. We yearned for lamb in the freezer and Darcy, my stepmother was learning to spin. Dad came up with the plan that if I purchased the sheep he would care for them, feed them and raise-up the lambs.

He found a great deal on four ewes. We went to pick them up and they looked good to us. They were loaded into the trailer and brought home. After a two hour escapade of chasing them all over the farm, we got them safely tucked into their new digs at High View Farm.

We bought Roger, our ram, a month or so later. He was much more willing to go into his new stall as he had four ladies waiting for him. That was in December. Over the next five months we went through the trials and tribulations of owning sheep. We sold one ewe to my brother and then lost two ewes to illness. The saying proved true. A sick sheep is a dead sheep.

I was pretty discouraged. Maybe we weren’t made out to be sheep farmers. Up until this point I hadn’t spent much time with the sheep at all. It was Dad’s part of the bargain, right? But, with one ewe left, I decided to rename this girl to make her mine. I named her Hope, as she was our last hope of having a lamb.

On May 15th, I received an early morning phone call from Dad saying that Hope had lambed and I should come up, because the lamb was not doing so well. I pulled my overalls over my pajamas and made it to the farm in record time. What I saw made my heart drop: a tiny shivering little lamb lying in the corner of the stall. Hope was up pacing around, bleating and sniffing this new creature. She acted as if she knew she had a job to do, but didn’t know where to start. I had been told that first year lambing Romney ewes don’t make very good mothers, and Hope was no exception.

I went into the dark, cool box stall. I touched the lamb. It was cold, but breathing. Darcy handed me a towel and began to rub the lamb. Dad gave me a cup with a betadine solution to dip its umbilicus in. I went to lift the lamb to its feet and realized it had absolutely no strength to stand. This was not normal. Lambs will make it to their feet sometimes within minutes of being born. I managed to dip her remaining umbilical cord and checked under her hind leg, she was a girl. I ran my pinky along her lips, but she didn’t even open her mouth. Lambs are also born with an instinct to suck. Not so with this one. Once I did get her mouth open, it felt cold and lifeless. Hopeless, I thought.

Dad rigged up a heat lamp and Darcy, my stepmother and I took turns rubbing and warming her. We caught Hope to see if we could get the lamb to nurse. Darcy had her head and Dad held her against the wall. Hope was having none of us holding her or of her lamb. On my knees I lifted the lamb to its mothers teat. I hand milked some of the colostrum on the lambs mouth and pried her mouth open and placed it on the teat. There was no reaction from the lamb. The colostrum is so important for a new lamb and this girl really needed it. After trying again and again with no success we decided to milk the ewe. We headed to Paris Farmer’s Union for paraphernalia to bottle-feed a lamb.

The first twenty-four hours we attempted to squeeze colostrum into her little mouth. She wouldn’t suck, and most of the sticky fluid dripped down her chin. She only had the strength to hold her head up and even then, just for a short while. She didn’t make a sound. It was so strange to have a quiet little lamb. We were feeding her every two hours and still she was taking no more than a quarter of an ounce, if that, each time.

We pried her mouth open to get the nipple in. While we held the bottle in her mouth we nudged her behind like a mother sheep would do. Squeeze, dribble, squeeze, dribble, maybe a swallow. How much got into the lamb? Hopefully just enough…Our hands became sticky from the wasted, priceless colostrum which was getting harder and harder for Hope to give up. She wasn’t into the whole milking experience and quite frankly neither were we. It took all three of us and one ewe to produce a miniscule amount of the rich milk. We were growing pretty discouraged.

The lamb was now thirty-six hours old, and I was in the stall with Darcy trying to get the lamb to eat. We attempted feedings together. When one of us got discouraged, the other would take over to give it a try. Darcy held her hand under the lambs chin, trying to support her head and keep the nipple from popping out. Her palm was wet and sticky with milk as she coaxed the lamb to nurse. I rubbed the lamb trying to stimulate it. She all of sudden realized what she was supposed to do. It was like the spark of life entered her weak body. The lamb vigorously lapped and suckled the milk from Darcy’s palm. We put the nipple in her mouth and she began to suck! She drank for about a minute taking in about an ounce and a half. Darcy and I looked at each other and began to cry. We were surprised, very relieved and a bit overjoyed. It was the first time in thirty six hours where we felt a miniscule of hope. The lamb tuckered herself out and fell asleep.

Our excitement grew with each feeding. “She took an ounce!” We’d exclaim. At two days old she stood! As the first week went on, she began to eat more and more. She’d stand between our legs and as she took the warm milk she’d slowly sink down and fall on her side, asleep. I stopped worrying so much at night when I wasn’t with her.

They got the call that she wasn’t doing so well. She was panting, probably too hot from the heat lamp and a bit dehydrated, we guessed. Also, her eyes had started gooping up. We placed warm teabags on them to clean them out. She became lethargic, refusing to stand. She was running a temperature. We had to give the poor thing intramuscular shots, as she had absolutely no muscle the injections went just beneath her skin leaving her lame. Over the next five days of injections, feedings every three hours, tea bags on her eyes and temperature checks, she began to gain in strength.

During this week when I was discouraged and exhausted from the one am feedings, I prayed and sang to her. I whispered in her sweet, soft little ears. I found support from my parents as they did from me. Darcy and I talked, cried and laughed together. But, we enjoyed silence too, sitting together in the stall just watching the little lamb. I decided that if she made it two weeks I would name her Faith and she would be a keeper! She would live out a long, happy, life of leisure on High View Farm. She would not make it to my freezer, let alone my dinner plate.

Two weeks went by and she was eating four ounces. Her eyes were about the same, but maybe a bit better. I joked, saying I should name her Teabag. I sang the song “Faith”, by George Michael. I even played it to her on my iPhone. Ohh, you’ve gotta have faith-a-faith-a-faith! We called her by name and giggled when she stood and trotted up to us at feeding time. I was Mama L and Darcy was obviously Mama D. All this time not a peep came out of this girl, and we were still prying her mouth open to get her to suck on the nipple.

Three weeks passed and Faith cried for the first time. I swear I felt my milk come in! She went at the bottle with vim and vigor, sucking down five or six ounces, four times a day.

By the time she was six weeks old we’d cut her down to three bottle feedings a day. She was out to pasture with her aunties, eating grass, grain, hay and drinking water. Yes, I said aunties. The ewe we sold to my brother came back to us. She escaped the first day, jumping over a chest high box stall door. She was always out at Jeff and Colleen’s so I re-named her Freedom. Hope is Faith’s biological mother. But Darcy and I call her auntie. Darcy and I, we’re Faith’s mothers!

Except for a bout of diarrhea, Faith is strong, happy and chewing her cute little baby cud like a big girl sheep. Yes, I talk to her in a baby voice. Don’t judge! The only way Dad can get her to follow him is to raise his voice. It sounds a bit crazy to me, but Faith follows. I can hardly believe that it has been only six weeks. I can’t believe that this frail, helpless creature is now almost pushing me over in the pasture wanting her bottle, screaming “ma-ma-ma!”

What I can believe is that the miracle of new life brings people closer, even when they didn’t realize they were separated. Those past six weeks with Dad and Darcy were priceless and I wouldn’t exchange them for the world. With not needing to be at the farm as often for bottle feedings, I can feel a separation beginning. I don’t want to take for granted what Faith has taught me.

A part of me will always be Daddy’s little girl. But I am not her any more! I am a grown woman in my forties, yet, still a farmer’s daughter who was empowered by a tiny helpless lamb and who has learned to create the life I have always envisioned. Helping out on the farm with my dad and stepmother certainly doesn’t look the same as it did when I was young. But that’s okay, in fact, it’s great! I have finally come home!