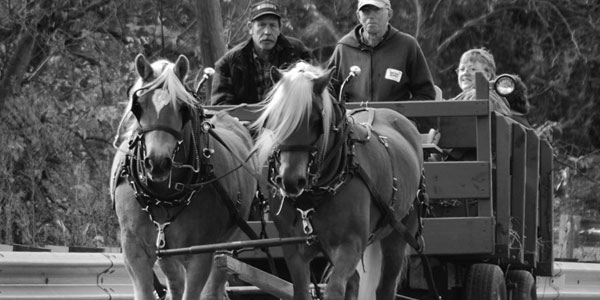 The Moyer family of Hobbie, Pennsylvania, has been farming the land for at least four generations, so it has undergone many changes throughout the years. Initially, it served primarily as a dairy farm. The family also sold produce in a local town and maintained a stand on the farm, primarily selling potatoes.

Being a resourceful and hard-working farm family, the Moyers maintain a saw mill, woodworking shop, and a uniquely-designed butcher house in which they butcher, smoke, and refrigerate meat products.

Moving to the present, the Moyers have developed a way to have fun and supplement their income: they host Fall Harvest Days on weekends during October.

Held the last few years, this October celebration has been a success because of a precise and combined effort of family and friends: Gary Moyer; Kathy Moyer, his wife; their sons, Matt, Gary, and their girlfriends; Gary’s mother and brother; friends Sally and Mark Shaw; as well as additional family and friends.

The celebration offers homemade food and two corn mazes: one walk-through and the second a drive-through/spook ride where two teams of Haflingers (one belonging to Gary and the other to Mark Shaw) carry visitors through the attraction, day and night. Half way through the maze, spectators can enjoy a corn tower and view the surroundings. During this time, visitors can also pick a pumpkin. All in all, customers have found the drive-through to be particularly enjoyable.

Several additional attractions include a pumpkin ride for children, a pumpkin shooting cannon, a plastic slide with a landing pad of straw, and a pony ride which features one of Gary’s Haflingers. In addition, many customers enjoy watching the Haflingers and cattle from across the pasture fence. The Harvest Days also boasts a pet goat and the Shaw’s miniature horse, which garner considerable attention.

During one Saturday of the Harvest Days, the Moyers sponsor a horse plowing demonstration, during which the Vastine family from Millville, Pennsylvania, participates. Luke Vastine and his walking plow are a true crowd pleaser.

The success of the Fall Harvest Days venture has increased each year especially since Gary’s sons are always developing new ideas. News of the festival has been spread via the Internet and printed flyers. Folks seem to enjoy the variety of activities that focus on slower-paced farm life.