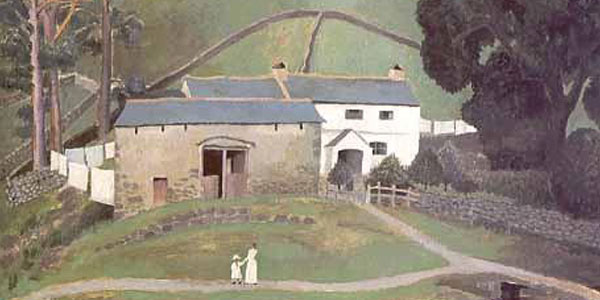 A coon’s age ago when I first started reading the Small Farmer’s Journal, I noticed that the editors had a thing about life on the margins of farming — that is, fencerows, windbreaks and woodlots, the banks of creeks, streams and ponds, swamps and wetlands — those wilds large and small that surround, divide and overlie all cultivation and grazing. Those issues of the magazine even shared sketches and suggestions for optimizing these parts of an otherwise intensively managed and productive farm.

Of course elsewhere along the way I also came across the sayings of the “Get big or get out” movement promoted by the government and many ag colleges in the late 60s and 70s, that encouraged an arrogant outsized farming style fencerow to fencerow, with no wasted space left for pests to hide and accumulate. Having clean, bare fence lines — or no fences at all — seemed just part of the gospel of Bigness and scientific efficiency that was going to make Agriculture the very backbone of the economy.

Which, sadly, never quite happened. What that approach required was a glut of several products that could be made into anything else you might need, at a price that would remain artificially cheap, all the while being held up as a model of agricultural efficiency. GMO corn and soybeans and CAFO beef were commodified, to the point that shoppers would hardly recognize the ingredients in their frozen dinners and fuel tanks, and would not be bothered when whole areas of the countryside were ‘sanitized’ or polluted out of existence.

But let’s get back to the margins, and why they seem to have always been part of SFJ’s methods and message. I was soon reminded that the margins were where our friends were, all those species and individuals who might help with the tasks of farming, without resorting to pesticides and herbicides. We need to allow the complex meanderings of wildlife and their natural balance to linger in the neighborhood and offer help. Even when we keep bees, there remains a need for places for wild pollinators. And shelter for birds and bats that can eat their weight in insects every day. On the Midwestern farms I worked as a boy there was a complicated dance around the field mice who sheltered and thrived in hay fields. When we mowed and raked the hay, their exposed villages suddenly fed all manner of predators — foxes and raccoons, hawks and blacksnakes and owls, that soon found their way to the feast.

The margins are where we overlap, where we test our absolutes. Where we touch. Whose land, whose barrier is this? Even cows know the taste of the forbidden, how sweet the grass that springs untended from the other side. And individual species’ invisible barriers may be stronger than those we erect and repair. I know a farmer who built perfect bluebird houses and screwed one atop every other post around his field. But the bluebirds couldn’t stand to live so close together — no more than three or four of the dozen boxes to a side were ever occupied.

Along the margins there is flow, air leaps from tree to tree, and thus attends to the migrations of birds. In the margins are obstacles for large pursuers seeking smaller prey. The fences humans use to contain their domestic animals are mild hindrances or less, to wild animals. Deer, coyotes and cougars take most fences on the run, dive through or soar over without ever breaking stride.

The margins mean safe nests and hiding places — gullies full of brush, killdeer and quail, fence lines of berry bushes for the picking and scavenging. Sources of food and shelter, what we call habitat. Thistles for the grosbeck, and flitting among cherry blossoms and honeysuckle, tiger swallowtails.

Margins contain the scribble of tiny watersheds, mere trickles that every big operator with his heavy noisy equipment itches to fill in, erase, bulldoze to save the endless trouble of merely turning around. But what if his heavy equipment were a team that needed a drink halfway across that field?

No small farmer needs a reason to praise the margins, to allow much less praise every wild creature secreted there, that should be granted passage and gleaning rights because it was here before us, and is part of something greater than us, that despite our occasional effrontery still includes us. Though we might have no other use for milkweed, we know that the monarch butterfly requires it, and that should be enough. Who are we to begrudge its portion, while it cheers us as it goes about its business, in what appears a neverending dance?

Finally we need to consider farming as both a negative and a positive activity, a set of choices, as much what you don’t do as what you do. If cultivation deliberately erases the diversity of nature, in favor of a few selected species, then the laissez-faire, the “let-be” of the margins, is a chance for nature to recover, maintain itself and carry on. A row of trees can’t replace a forest, but it can offer other lives on the margins a nest, a resting place, a launchpad and a line along its yearly migration.

The more I’ve thought about these narrow leavings around healthy small-scale farming, the more I have wondered (on grumpy, overcast days) if we shouldn’t mandate the margins. Make laws, designate some things off-limits, as we do already, half-heartedly, with watersheds. Farmers could do worse than plant berry canes that will offer habitat for rabbits and birds, as well as the makings for an occasional pie. But there is a hell too easily made of rules that don’t fit all occasions. We know of a farming friend whose best friends in his orchard are skunks who hide in his old drainage tiles, that climb the trees at night and eat the snails that otherwise plague his orange blossoms. So he doesn’t touch the tiles, or bother skunks, that he greets gingerly, with a nod of benign neglect. What we all want and need is no more and no less than a world of small farmers moved to share with their smaller neighbors, who are forgiving and appreciative whenever a nesting pair of robins helps keep down the insects while feeding their ravenous brood.