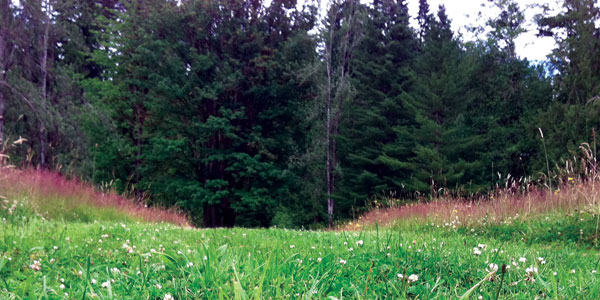 As I was driving south on Hwy 41 with my grandson Michael from our week-long vacation at Chippewa Flowage in Hayward, WI, I noticed something amiss about something I take for granted to be there along the route. My ancestors came to America in the late 1800s, and our grandfather Ambrose and grandmother Sophie Wiedmeyer grew our American family tree on mother earth upon deemed to be farming acreage in Richfield, WI. As Mike and I headed south, I glanced to my left as I probably do without exception when I take this route to look over at the dairy farm where my mother lived and my father toiled. I was at that family place countless times as a youth, we even had numerous of my school classes bussed out there for a day at the farm. My grandfather Ambrose and my grandmother Sophie raised my mother, Loretta, there along with six of my aunts and uncles. My father, Frank Auer, toiled there as a farm hand and met and fell in love with my mother, Loretta, at the farm. We were always attached to the farm, even after my parents married and we lived in town. Grandpa would bring large cases of 30 dozen eggs for my mother to sell to our plentiful German neighbors from out of our hallway. We had live chickens in our city basement where they were eventually butchered. At least once I remember we had a few loose chickens down there, and that was exciting for us kids.

The Wiedmeyer’s aren’t wall flowers, somehow they made it through the depression. My grandfather was active in the hierarchy of the state farming associations and stories were told of how contentious and dangerous politics and even real life was back then with the milk wars. My mother was almost abducted by those opposing my Grandpa’s views one day on the way home from school and from then on for awhile she and the others had to be driven daily versus walking as the children had for years.*1*

Back to the present. When I looked from the highway to the left that day, albeit a bit late, I didn’t see the farm. I saw some huge building in a large new construction area going up. I was confused… and struggled against what I thought I might have seen. I checked the next exits, and yes it seemed like that was the Holy Hill Rd. Hwy 167 West Exit (the farm is to the east). I was unconvinced and not all that alarmed, my reasoning was telling me I had hastily made another mistake, that the farm was there just fine like it had been every other day in my life when I visited, looked that way, or called it up to memory in thinking of mom’s stories.

I remember the story of mom almost burning that house down the day she started the kitchen on fire as she had a mishap with learning to cook bread. I remember being there with my cousins and other family on countless days of familial joy. I remember doing a little small game hunting there. Most of all I remembered my mother’s stories from there and pictures I had seen of Aunt Betty and Uncle Ray’s wedding there come to mind. Also in my mind is a picture of my aunt, Sister Floriana, alongside her dad with the main barn in the background and “Wiedmeyer Farm” emblazoned on the side. My heart and soul are so attached to that living spot on earth and its connection to my family’s history that I had never ever entertained the thought of life without it being there.

The next day I had to go back to the area to return something to a Fleet Farm store just south of the farm area. I did my business there and headed north just a few exits to Exit 57 Holy Hill Rd – Hwy 167 West, the farm exit. Upon approaching the exit, catching glimpses across the road and to my right a quarter mile down the road, I was shocked to not see one single familiar thing. It was gone… totally GONE, ALL of it. The massive old large family farm home from the 1800s, the newer ranch from mid century 1900s. The road was tore up for construction, the road was one lane in some areas, there were large many acre parcels of newly cleared land. Land not to be toiled upon to raise crops, but land stripped of it’s top soil and in some stage of preparation to be parking areas or mega building sites. Upon where I surmised as best I could, upon the space where the farm actually stood, was a massive new building, a distribution center for Briggs and Stratton. Briggs has a treasured history all its own, but I was not at all receptive to it stealing our family history.

I was shocked… I was shocked about it all being gone without the slightest trace, I was shocked at my deep, hurting, emotional reaction to the scorching feeling of loss. The feeling of being violated surprised me yet persisted, that something priceless and personal was stripped from me without even the slightest warning. How I would have cherished a chance to go to the family farm one last time. How I would have loved to stand there in the driveway alongside the house and think of my mother playing there, my mother taking over the cooking for the family and hired hands in the kitchen at 17 due to the sudden loss of her mother, and my mother and my father hanging out there as they experienced their growing interest – soon to be love – soon to be marriage.

Tears came… for a while, and then again. I reached out to another fella of Wiedmeyer roots, friend and first cousin Mark Wulff. Mark has a sense of history, and his mother Betty Wiedmeyer-Wulff, who I cherished, had done some genealogy for the family. Mark had seen these events coming. He reminded me a few years back of a newspaper article in the business page that foresaw that intersection being a soon to be future hot spot for development of the metro area north of Milwaukee, along this major transportation artery.

They were right… and it happened and I should not have been surprised… but I was. My emotion was that something beloved had been torn from me. A huge hole in my being was carved out and the void was full of pain. I called my brother Ron and later we discussed the apparent inevitable, yet hurtful, changes that come to us in life. We acknowledge that somehow life moves on and we survive and even prosper. Ron had been visiting a long sick friend when I called. I’m sure he could readily feel from his own vantage point the inevitability of gains and losses in life.

The shock has subsided, but the sharp sense of emotional loss and personal violation persists and the pain remains. I am writing of my memories, loves, and feelings through clouded eyes with a sheets of paper towel alongside and often at my eyes and nose.

So all I cherish about my families birth place in America is my emotional heritage. A heritage I took too much for granted only to be reminded of its importance when it disappeared without a sound, without a trace left for me to ponder and love.

*1* Despite its wholesome associations with with goodness, mothering and love, milk has also occasionally been a source of conflict. In Wisconsin, low milk prices during the Depression led some farmers to reduce supplies of milk by pouring it out as part of what became know as the “milk strikes.” Things got so heated that on May 16, 1933, 75 members of the National Guard were mobilized to quell the violence. Dairy wasn’t the only source of contention. Depressed prices led to violence and strikes in many agricultural sectors. By 1933, dairy farmers were receiving less than half of what they had made for their milk in 1930.