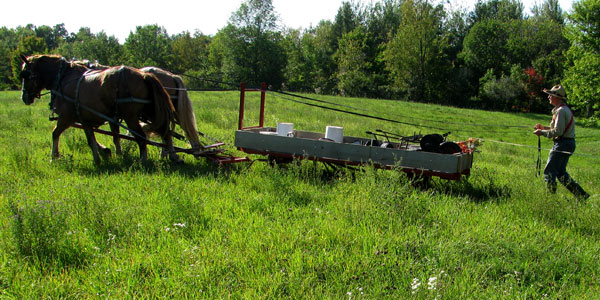 by Tony McQuail of Lucknow, ON

When we started farming in 1973 we decided to do some permanent fencing using page wire, cedar posts and a top strand of barbed wire. We found that sheep would work the page wire up from below and that despite the barbed wire horses would push both it and the page wire down from above. We started experimenting with electric fencing both to see if it would be better for keeping the livestock from beating up the fences and to allow us to do more temporary fencing which allowed us to make smaller paddocks and get into a more intensive pasture management.

The first wire we tried was a small gauge steel wire which was not terribly satisfactory with horses. If it were strung across a gateway – half the time they wouldn’t see it and would charge on through. And the other half of the time they would remember getting shocked by something they hadn’t seen there and would refuse to come through when we were standing there with gate wide open. We realized that visibility was an important consideration when working with horses.

As time went on we replaced much of our perimeter fencing and some of our interior fencing with 3 strand high tensile wire. This gave us a powerfully conductive perimeter that could work for both sheep, goats, cattle and horses. Though high tensile wire can do nasty things to horses if they get tangled up in it. I’ve seen horses legs sliced to the bone with wire that acted like a cheese slicer when they ran through it or got it wrapped around their legs.

We tried using poly wire with the horses and sheep but found it worked well when brand new but as soon as it had gotten broken or had been up against a steel post or some old broken wire and had some shorts it wasn’t very conductive and the sheep stopped respecting it and the horses would sometimes run through it before they would see it. We were almost ready to do our interior fencing with permanent High Tensile wire when we read about a device called a reel barrow that would let us put up to 4 wires of a braided, galvanized soft steel wire called maxi-shock. We decided to give it a try for the sheep. About that time we also started using poly tape to have a much more visible wire for the horses. We found we could make a multi purpose fence with two lower strands of maxi-shock and an upper strand of poly tape. The poly tape didn’t even have to be conductive any more. The lower strands of maxi-shock could carry the current for fencing the sheep and they would also work for the horses if they grazed up to the fence while the highly visible poly tape would keep them from running through it. 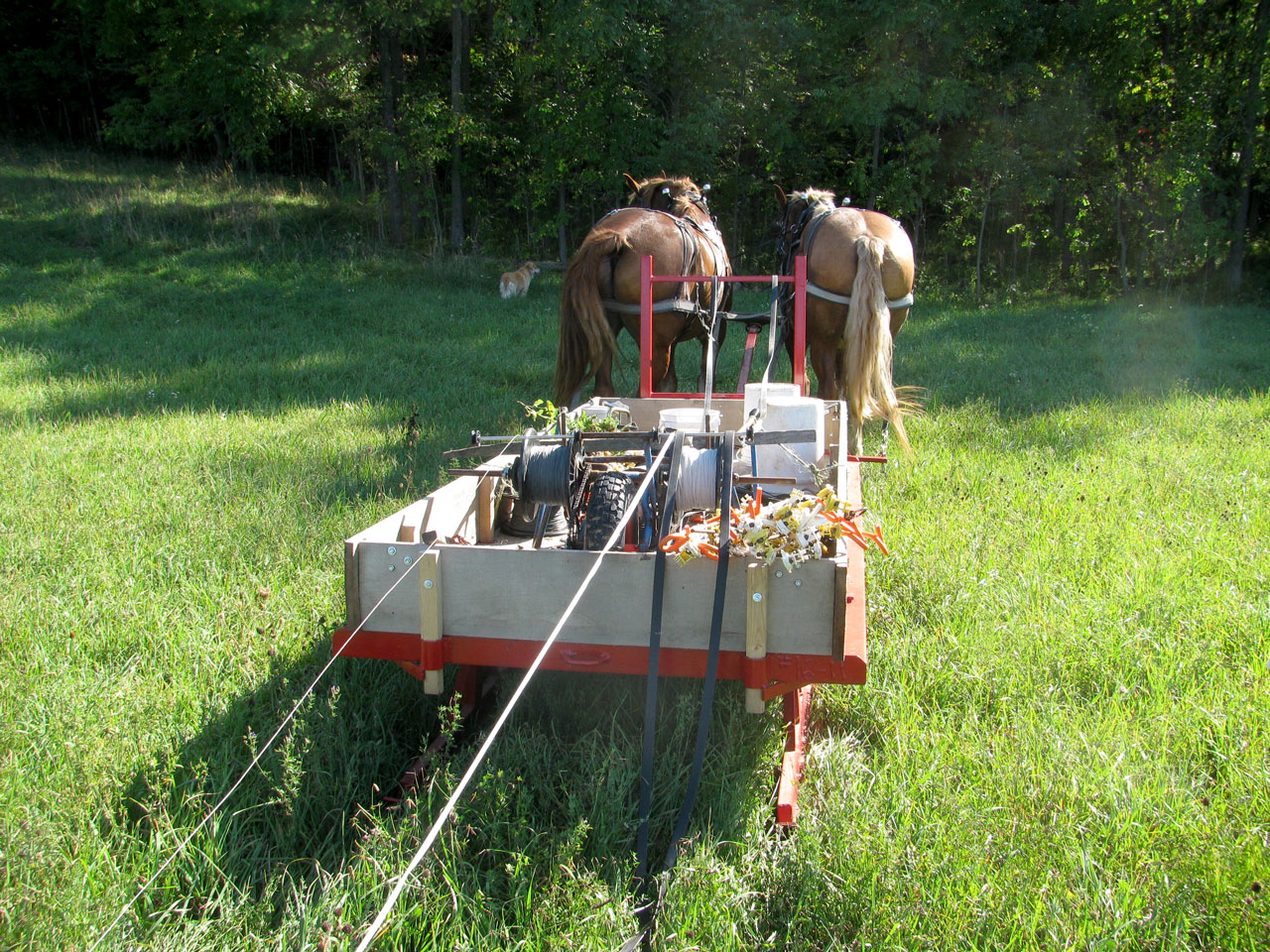 We also started making “electric western gates” with gallagher insultimber droppers and polytape. The old western gates had an upright wired to the inside of the two gate posts which then had barbed wire stretched between them – and usually several spacers as well to keep the barbed wire apart. To open the gate you flipped the top loop off one of the uprights – pulled it out of the bottom loop and dragged the gate out of the gate way. We replaced the wire loops with bale twine and the barbed wire with three strands of poly tape. If I’m using old poly tape I’ll put a run of maxishock at the same level as the lowest polytape wire and run a piece of maxi shock up both sides of the gate about 8 inches in from the upright insultimber dropper. The maxi shock makes sure the power gets to the far side of the fence and the side pieces run power up to both ends of all three polytape levels. Positioning it 8 inches from the dropper means you can hold the dropper without getting shocked even if the fence is on. I use bale twine instead of wire because it is not very conductive (it can still nip you if it is wet), I have a lot of it and it is easily adjustable.