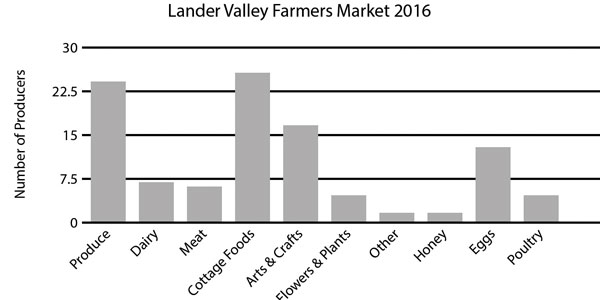 Rebuilding Rural Communities and Economies Through Self Determination

Food Freedom is a food system that increases consumer’s access to safe and fresh local foods. The goals of safe and wholesome foods are the same as with the regulated food system. Food Freedom does not replace or make regulators or regulations outdated. In fact food regulators still have a place in the food safety discussion. Their oversight is needed for industrial scale agriculture and the faceless transactions that are so common in today’s fast paced society. When food is produced on an industrial scale in no different manner then a widget and consumers have no idea of its origin or how many times it has been handled, then oversight is needed. This is the job of the USDA, State Health Departments and other regulatory agencies.

It was not until the 20th century that farmers and consumers began to see their food rights erode as government regulations designed to control and protect commercial and industrial agriculture interests began to take hold. The effects of these regulations were more pronounced in rural communities with their agricultural based economies than in urban communities. Today across the country Food Freedom is an idea of the past. Licenses are required to sell most food products from eggs and chocolate chip cookies to lemonade and salad greens. With these regulations farming communities have lost the ability to feed themselves. At this point in time most people cannot even envision Food Freedom or remember a time when communities had the right to feed themselves, but there is hope. Rising and awakening from this regulatory nightmare consumers, farmers and food producers across the country, from Maine to California are demanding Food Freedom. The first rumblings of change were heard in Maine with Local Food Sovereignty Laws. These laws were passed by towns and townships. Though these attempts were mostly symbolic as county laws cannot be less restrictive than state laws they brought with them inspiration and hope that Food Freedom could once again become a reality.

In 2015 the Wyoming Food Freedom Act did just that. Introduced by Wyoming State Representative Tyler Lindholm, this Act restored the food rights of the citizens of Wyoming. Once again farmers and food producers in Wyoming have free and unencumbered access to sell homemade foods directly to an informed end consumer. This Act only effects these direct sales and all other food sales are still regulated by the State. The family milk cow that feeds the neighborhood is once again a reality as are small dairy herds with direct to consumer sales. Yes, to yogurt, cheese, kefir and ice cream to the informed end consumer. Chicken, (most other meats are federally regulated) is the only meat included in the original Act. Yes, to chicken tamales, pre-shredded chicken for casseroles and more with no regulators, regulations or certified kitchens, just a direct sale between a producer and an informed end consumer. It is that simple.

The Act has been so well received that the Wyoming State Agriculture Commission is actively looking for ways to further strengthen it. In April of 2017 with a unanimous vote of the legislature the Wyoming Act was further enhanced with the addition of food products made with domestic rabbit and farmed fish. The amendment also allows Food Freedom products to be sold at the same establishment as regulated products. Producer owned stores are being created to sell food produced under the Food Freedom Act. Vendors at Farmer’s Markets have increased along with a vast increase in the array of products being offered. This has led to more consumers attending these market. This is Food Freedom!!!!!!

The chart below shows the increase in producers at the Wyoming’s Lander Valley Farmers Market.

North Dakota has followed Wyoming’s lead with The North Dakota Food Freedom Act which the governor signed in April of this year. This Act will go into effect on August 1st. Colorado also has a Food Freedom Act that allows for the direct sales of non-hazardous foods. In California the Homemade Food Act has been introduced. This Act would permit the sale of prepared meals and other foods from small-scale home kitchen operations. This Act has already passed the State’s Health Committee and a full vote is pending. There are several more states considering Food Freedom Acts. There is even federal legislation, the PRIME ACT, being considered. This bi-partisan bill would return regulatory responsibility back to individual states. This would give states the freedom to allow farmers to sell their custom-processed meat products directly to consumers within their states. In addition to making it easier for local producers to sell their meat the bill’s supporters also believe that it would revive the small-scale meat processing industry in the United States.

Wyoming has shown that local self-regulating food systems between conscientious food producers and informed end consumers are proving to be as effective if not more effective at providing safe healthy food then government regulated systems. As Tyler Lindholm succinctly put it, “We still have had zero foodborne illness outbreaks due to this Act passing into law.” This is Food Freedom!!!!!

Regulations not only stifle rural economies but also farm diversity. As more regulations narrow farm economic opportunities farmers are pushed towards industrial scale commodity farming. Historically farmers relied on direct to consumer sales to supplement their incomes. These sales varied from eggs and milk to beef and pork along with a plethora of home baked goods. Across the country most rural communities import food, while local farmers, many of who operate at a loss, export food. Most farmers receive on average just 20% of the consumers food dollar. With Food Freedom farmers would now have free access to the other 80% of these food dollars. By restoring this access to local markets Food Freedom will encourage a diversity of locally produced and available food products.

As Food Freedom blossoms many of these new enterprises will grow and become businesses themselves. Eventually we will see the rebuilding of our rural communities as this greater economic opportunity leads to robust rural agricultural economies that can support the rebuilding of rural community infrastructure. Across the county we will begin to see the rebirth of local creameries, food processors and eventually slaughter houses. Once again As Tyler Lindholm succinctly put it, “Wyoming’s local food options have exploded.” This is Food Freedom!!!!

Below is a bar graph that represents the products offered at Wyoming’s Lander Valley Farmers Market before the Food Freedom Act. 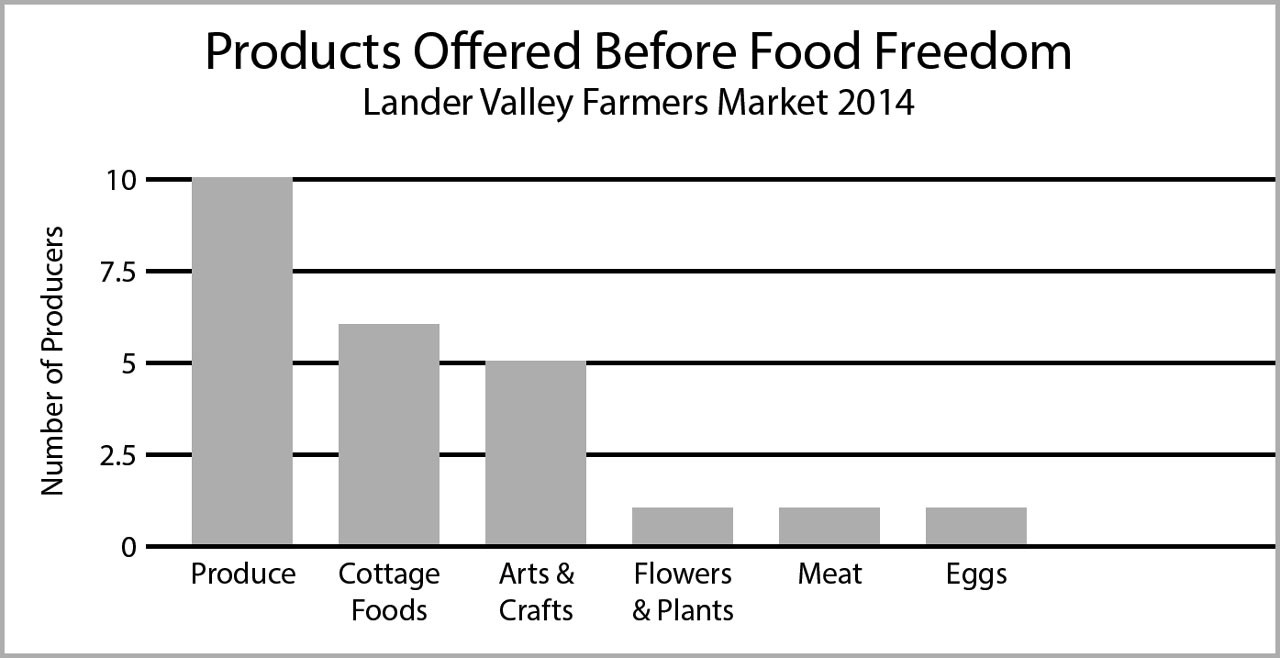 In just two years of Food Freedom the diversity of products has grown as seen in the bar graph below. 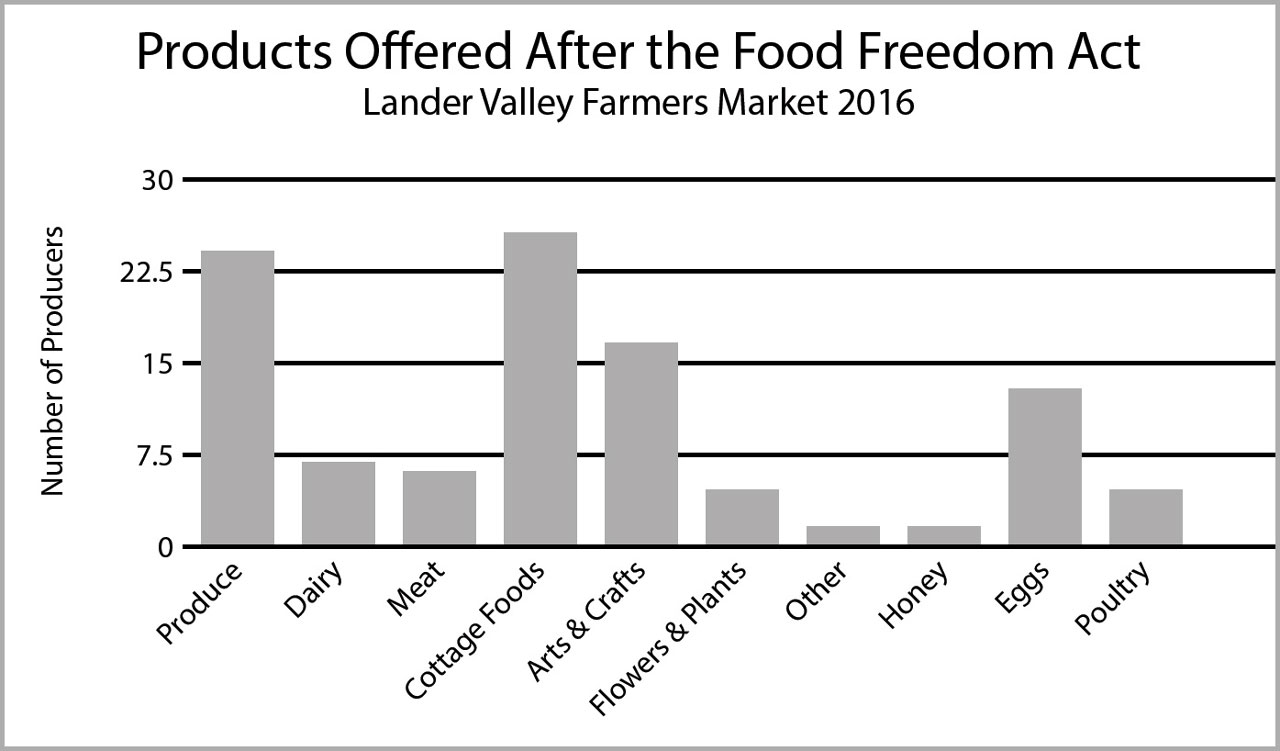 This growth in diversity is just the beginning.

Food Freedom is the next generation of Farmers:

Tyler Lindholm shared a story of a thirteen year old girl who contacted him about how to sell milk from her goats under the Wyoming Act. With his guidance she crafted a contract that customers sign that declares that the milk they are purchasing is produced under the Wyoming Food Freedom Act and has not been inspected by the State. She is now milking her goats and legally selling milk to her neighbors. This is Food Freedom!!!!

Henry Kissinger once said, “Control oil and you control countries. Control food and you control the people.” We the people, farmers, food producers and consumers, of the United State have lost control over the food that we eat, our local food systems and our self-determination.

The time has come for farmers, consumers and food producers in all states to have their food rights restored. This will be no easy task as freedom lost or taken, as the case may be, is not easily regained. While we still have the right to water (for the most part) and the right to air, we have lost our right to food. It is time that we awaken to what has been lost and put forth the effort to regain our food rights and Food Freedom. I challenge everyone who believes in Food Freedom to call, write and email their senators and representatives. Build a coalition of farmers, food producers and consumers and together restore our independence and self-determination by demanding Food Freedom.

I envision the day when we come full circle and once again Food Freedom is the norm not the exception.