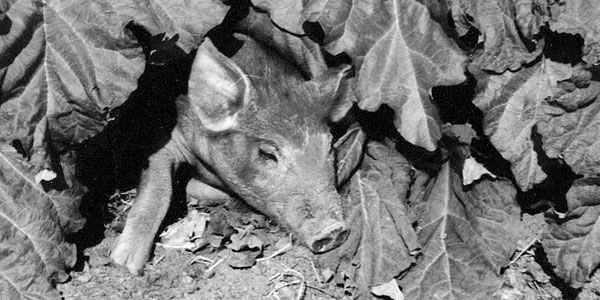 I was having an afternoon nap in our bedroom and enjoying a wonderful dream when I felt someone nibbling my ear and blowing warm moist air on my check. I rolled over, expecting to see Andrea, and almost had a heart attack when I opened my eyes to a little brown creature with a flat snout peering at me.

My Daughter Zoe was draping a small pig by the hind legs over me and laughing.

“Look what Jack gave me,” she said, as she scooped the piglet back up and cradled the little bundle in her arms.

I tried to appear pleased even though I knew that the baby sow she was showing me meant Big Trouble.

I couldn’t figure out what I had done to Jack to make him pull such a dirty trick on me. He was a pig farmer, and to him the animals were just commodities; but he knew damned well that I would be lumbered with the animal forever.

As I watched Zoe hug the animal and stare lovingly into her piggy little eyes I knew that, Franny, as Zoe had named her, (even though she had never heard of JD Salinger), would never end up as bacon on our table or perform any other useful function around the place. She would just be one more mouth to feed. The only saving grace, I thought to myself, was that she was not likely to grow as big or eat as much as some of the freeloading horses I kept around.

I was wrong about that.

Over the ensuing months Franny and Zoe were constant companions. When she got too heavy to carry, Zoe would lead Franny around by the leash like a dog, with the pig only allowing herself to be led short distances before rolling over on her back and demanding a belly rub. Zoe and our youngest daughter Emily would treat the piglet like a toy, making her wear necklaces of wild flowers or jamming her into their castoff clothing and bribing her to behave with oatmeal cookies.

In an effort to get some use out of the rapidly growing animal, I attempted to break her to harness, hooking her up to the kid’s wagon. That proved impractical because she would only move a few feet forward at a time before squealing in protest and flipping over on her back for yet another belly rub. You couldn’t chalk up much mileage like that.

The three of them ran, played and swam the summer away and by the time it was over the kids had to go back to school, Franny was no longer a cute little piglet. She had become a nearly full-grown sow weighing a couple hundred pounds.

With no kids around to amuse her during the day, Franny turned her attention to rooting up Andrea’s garden, tearing clothes off the line, attacking the trash cans and making a general nuisance of herself.

I kept building bigger and stronger enclosures for her but she would always find a way to escape. By the time she had reached full maturity and weighed nearly five hundred pounds I thought I had finally come up with a pen that would hold her. It did work, right up until her hormones kicked in and she began longing for a pig of the opposite sex. There was no such animal on our farm but on the slope above us Doug Morse had a barn full of breeding sows and a couple of boars.

One morning a gentle breeze drifted down from Doug’s place to ours, It must have been laced with a come-hither message from one of the boars, because Franny sniffed the air, perked up her ears then charged through the side of her pen and headed up the mountain. There was no stopping her.

It wasn’t long before the phone calls started coming, reporting that a huge brown sow in a sexual frenzy was cavorting shamelessly through Harmony on her way to Doug’s piggery. One neighbor in particular was upset because Franny mistook his white pony for another pig and had made some unseemly advances. The little horse panicked, cleared a fence, and was last seen cantering across the mountain to parts unknown.

Andrea and I jumped into our old blue pickup and started up the mountain to head off the pig. Halfway up the mountain we saw our neighbor Raymond Morse standing in front of his house so we pulled over and recruited him to help with the capture.

I didn’t have a clue how I was going to corral Franny and get her home, but I figured Raymond would be a real asset. He helped Doug look after his hogs and spent a lot of time in the pig barns. As he hopped in beside us, the cab of the truck filled with a pervasive cloying pong that attested to his familiarity with the animals in question.

We proceeded up the mountain and into the village and immediately sighted our prey bouncing down the road in the direction of Doug’s barn.

I jumped out of the truck and tried to reason with her but she would have none of it and brushed by me, knocking me off my feet. Raymond, coming to my rescue, helped me up and then set off on a younger pair of legs to head the pig off. He managed to get up close behind her but when he tried to get in front of her she would glace backwards at him then start a zigzagging maneuver that effectively thwarted his efforts.

They carried on a game of “catch me if you can” over the hamlet’s lawns for a short time – and then something very strange happened. I don’t know what caused it. Maybe the wind changed direction; and wafted the scent of Raymond’s very soiled barn clothes in her direction; in any event the sow suddenly stopped short, wheeled around and turned her attention toward my assistant. I could have sworn I saw her give a suggestive wink in his direction before she began to pursue him in earnest.

Raymond successfully dodged her attentions and with a very frantic look on his face headed for the safety of the truck. He wanted to get in with us but I locked the doors and wouldn’t let him in. I had a better idea. I opened a window and addressed Raymond as he circled the truck trying to keep ahead of the pig.

“I think she fancies you Raymond. Head down toward our place, she looks like she’ll follow you.”

So Raymond started down the mountain as fast as he could with Franny hot on his heels, savoring the boar scent emanating from his overalls.

Andrea and I started up the truck and beetled down the mountain, arriving just in time to open the barn door for a very tired Raymond and his pursuer. Once in the confines of one of the horse stalls we were able to contain the panting pig till her ardor cooled.

Franny’s escapes were still frequent after that day but they didn’t bother us as much as they used to, because as long as Raymond was amenable, we knew we had a fool proof method of luring her home.

As time passed, the little brown piglet became an eight hundred pound behemoth and almost unmanageable. I constructed an enclosure that was an amalgam of heavy gauge wire, sheet steel and electric fencing; the kids nicknamed it Jurassic Pork after a movie about dinosaurs they had just seen.

This extra security had become an imperative after an incident involving one of Andrea’s friends.

Frances (no relation) had come for a visit, driving in the little red Ford Escort. While she and Andrea chatted in the kitchen, I was busy building a chicken coop some distance from the house. The women gossiped for a couple of hours and when the visit was over and it was time for Frances to leave, I glanced up to see her car window rolled down saying her final goodbyes. At the same time I fired up my skill saw to make the first cut I had done that morning – forgetting the effect it always had on Franny.

She somehow always misinterpreted the high-pitched squeal it made as it bit into the wood as a mating call from another pig. If she could, she would always come flying to the source of the sound – and that morning, she could. Within seconds she came thundering around the house. spied the little red car, circled it once, sniffed the back bumper then reared up, mounted the vehicle and started violently humping it. Frances panicked but when I shouted for her to drive on, she finally, after several desperate gear grinding attempts, got it moving. The car started rocking down the driveway with the enormous oscillating pig in tow but fortunately it only had to travel a short distance before the satiated pig rolled off and headed to the barn.

We were somewhat confused as to why Franny would have selected the little red car as the object of her desires but then we remembered where Frances lived.

She had an apartment in a farmhouse adjacent to a piggery and was in the habit of parking her car close to the barn. Somehow the car had picked up enough male pig scent to become attractive to our frustrated porker.

As a result of her perverse encounter with our friends’ car, Franny was doomed to languish in her maximum-security prison full-time. I tried to make it as comfortable as I could, creating her a mud hole for her to wallow in and giving her a couple of baby goats for company. Zoe, when she was home, still spent her time with her – the enormous old pig still rolling over on her back to have her belly rubbed.

But girls grow up and pigs don’t live forever. One day, while Zoe was away at school, Franny passed on to that big sty in the sky and we buried her in a place of honor near the barn.

That all happened a long time ago but as the saying goes, “gone but not forgotten.” If you ever have my daughter over for dinner, don’t even think about serving her pork.