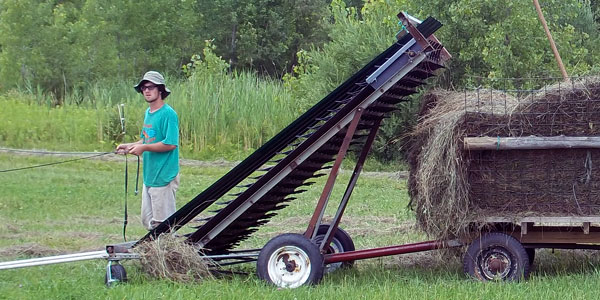 The limiting factor when harvesting hay on my small farm has always been loading the hay. Last year, when my third child outgrew my farm, I had only one body left to help hand load my six acres of hay. This year, even that one body was occasionally unavailable. I had started prototyping a mini hayloader to complement my haying efforts with my mini horses and now the crunch was on.

I used what junk I had on hand, old bicycle sprockets and chains, a half rotted swather canvas, pieces of bed frames and one section of hay inverter belting. The result followed conventional hayloader design with the inverter belting serving as a pickup reel, and the swather belting as the elevator carrier and the whole unit trailing the wagon. It was narrow, drew too heavily, and tended to roll the hay like a log. However, it provided a good education in building my own rollers and frame which sped up my second try.

For my second attempt I bought an eighteen foot long, four foot wide hay inverter belt, and almost five hundred nylon teeth. I built a pan under the belting attempting to use the one belt as both a pickup and an elevator in a trailing unit. I based this on the design of the hayloader pictured in Lynn Miller’s book, Haying With Horses, at the top of page 333. However, the inverter teeth were not shaped to drag the hay beneath them and it simply bunched the hay at the bottom of the belt like my first one did.

I was sitting on a 5 gallon bucket staring at the hayloader. I had a significant amount of time and money invested. My wife, the great motivating influence in my life, walked up and asked what I was thinking. I was thinking about dropping the whole project and I told her so. She told me that it had better work since I had spent so much money and time on it already. She doesn’t talk that way very often so I figured I had better come up with a solution.

Now, one thing I have learned over the years is that the best way to solve a problem is to do something else for a while. Some of my best thinking takes place forking manure, so I headed to the corral to clean out the leavings from the previous few days. I thought about that inverter belt and how it was made to be used. Fling a forkful of manure. Then I had a flashback to a picture in a previous SFJ of a Pottinger hay packing wagon of some sort. Fling another forkful. It had a pickup on the front and the hay compartment on the back…. Fling. An inverter belt picks hay up from the front and carries it to the rear…. FLING! I finished cleaning the corral and hurried back to the hayloader. 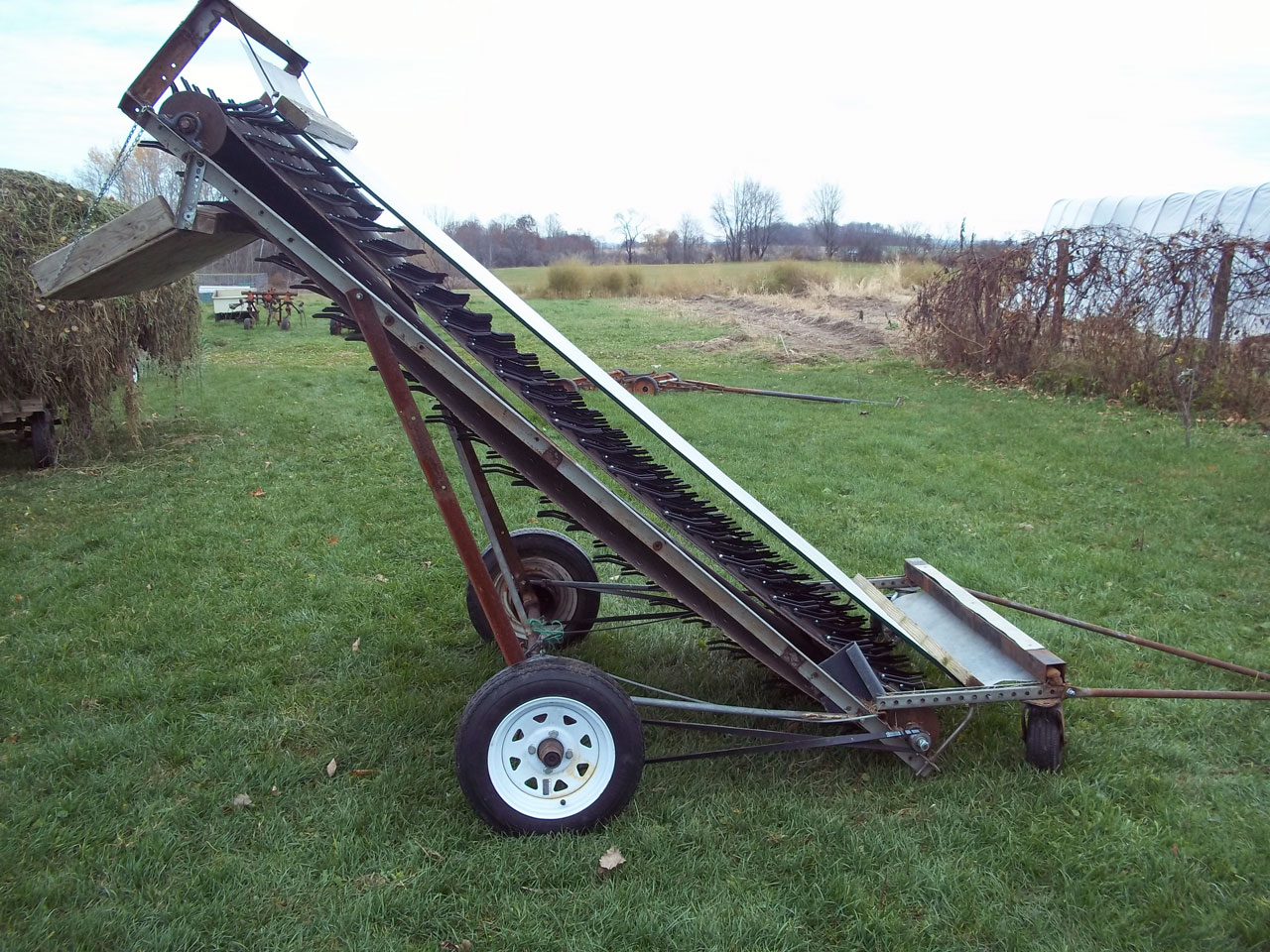 The hay is picked up by the belt on the lower right and carried up to the top left where it drops onto the wagon which follows.

Over the next few hours I moved the tow hitch from the high side of the hayloader to the low side to reverse the direction of travel. I removed the belt and turned it 180 degrees to change the way the teeth faced. That was faster than turning all the teeth one at a time. Then I removed the pan from under the belting and mounted a piece of roofing tin on top to hold the hay against the teeth. Finally I mounted a cable to serve as a temporary draw point for the wagon. IT WORKED! The sun shone more brightly and my marriage was saved!

My son Jeremy packs a load onto the wagon. This sure beats forking it on.

Now that the drama was over, and a genuine success in hand, I felt the compulsion to tell someone about it. Who better than the SFJ readers! So, since I hinted at the hayloader project in The Embarrassingly Late Spring edition of the SFJ, I had all the motivation I needed.

When I first dreamed up the idea of a mini hayloader, I wanted to come up with something that worked and was built with current off-the-shelf components. I have achieved both of those goals. 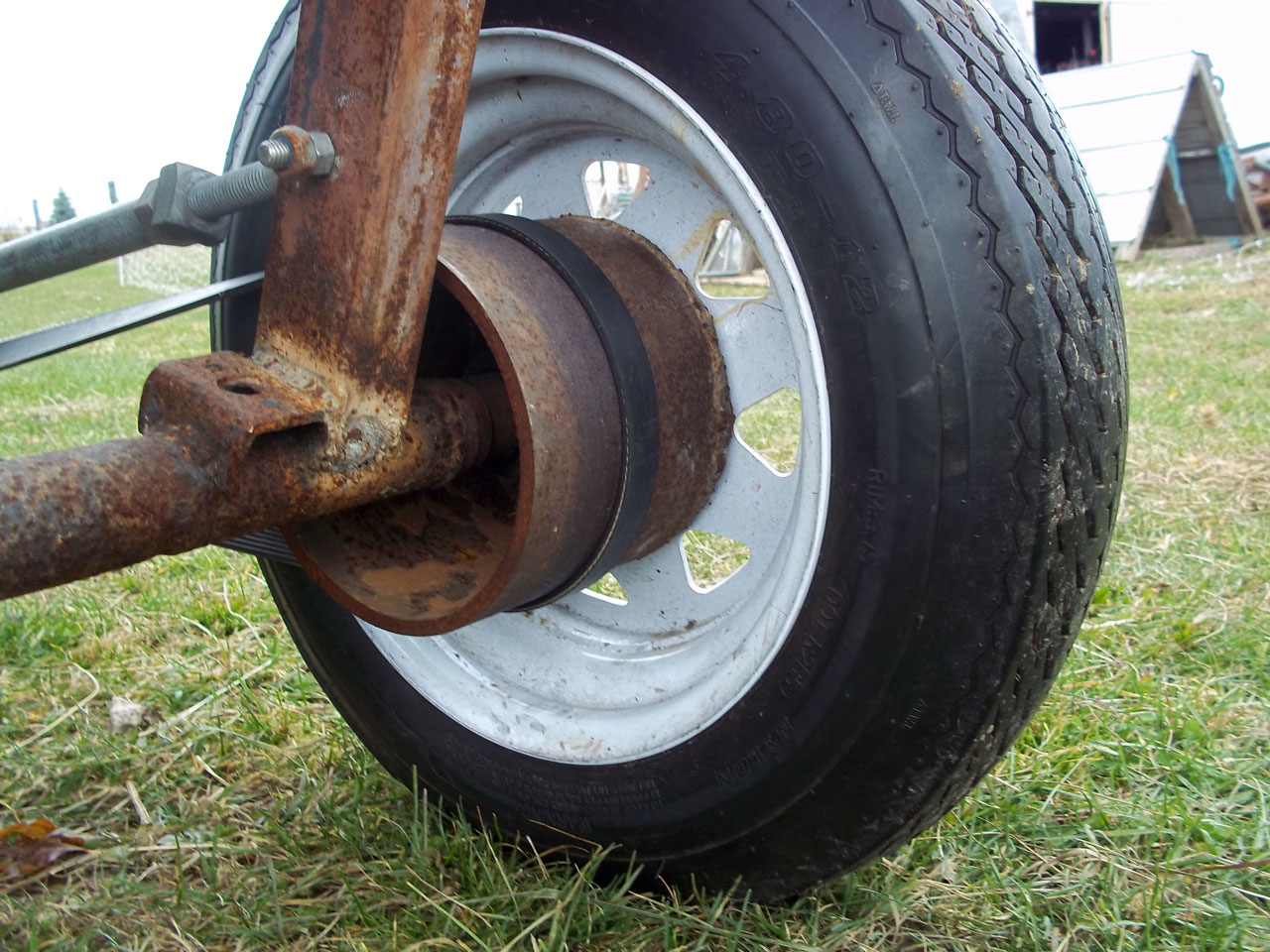 The drive pulley mounts between the rim and the hub.

The base of the unit is an old trailer axle that I extended to straddle the belting and frame. I built two “bells”. These are like very long bolt-on brake drums fitted between the wheel rims and the hubs. They are 7 inches in diameter and 8 inches long. They serve as the drive pulleys for the belting. 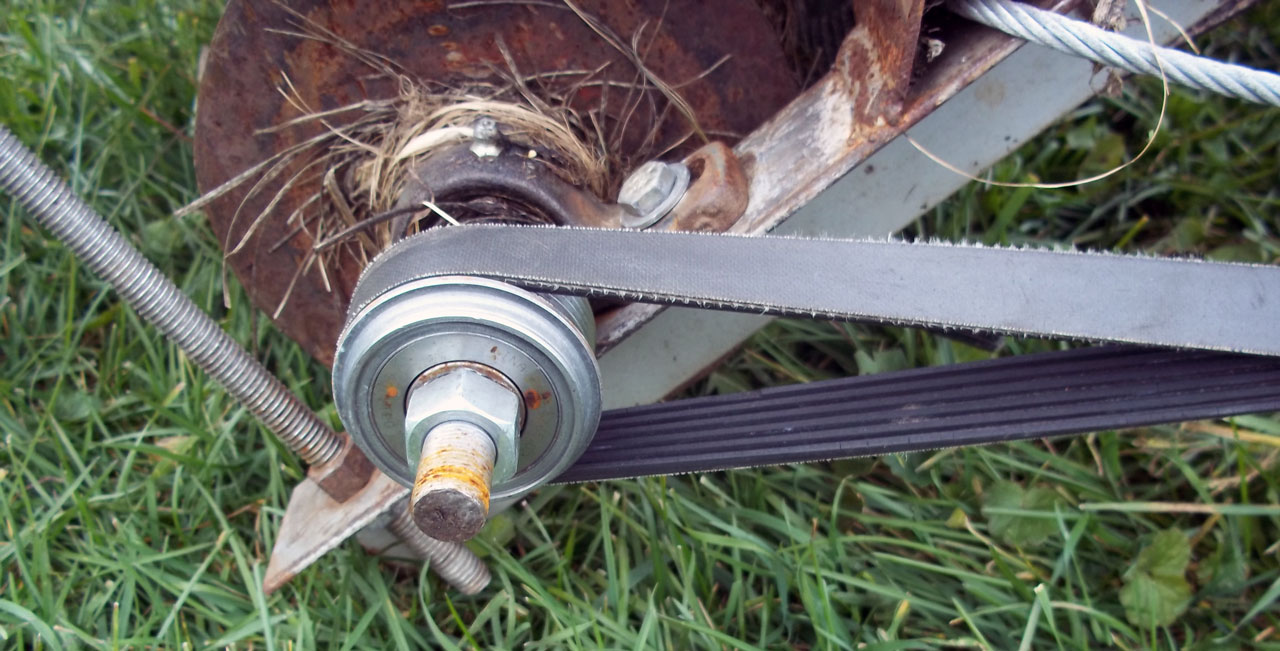 An example of an alternator over-running pulley. The pulley is threaded onto the driveshaft and has jam nuts on each side. The pulleys have not shifted under hard use.

I used serpentine fan belts as the drive belts and mated them to the driven roller with one way pulleys from off of old alternators. These function like the differential or the overrunning dogs on mowers and “real” hayloaders. The belts are twisted to reverse the driving direction. There is no visible wear on the belts even after more than 10 acres of hay so I am confident that this is an adequate method. Belt tension is maintained by a long threaded eyebolt slid into a 3/4 inch pipe with a jam nut. This assembly is mounted between the axle and the frame close to the bearing blocks of the lower (driven) roller. 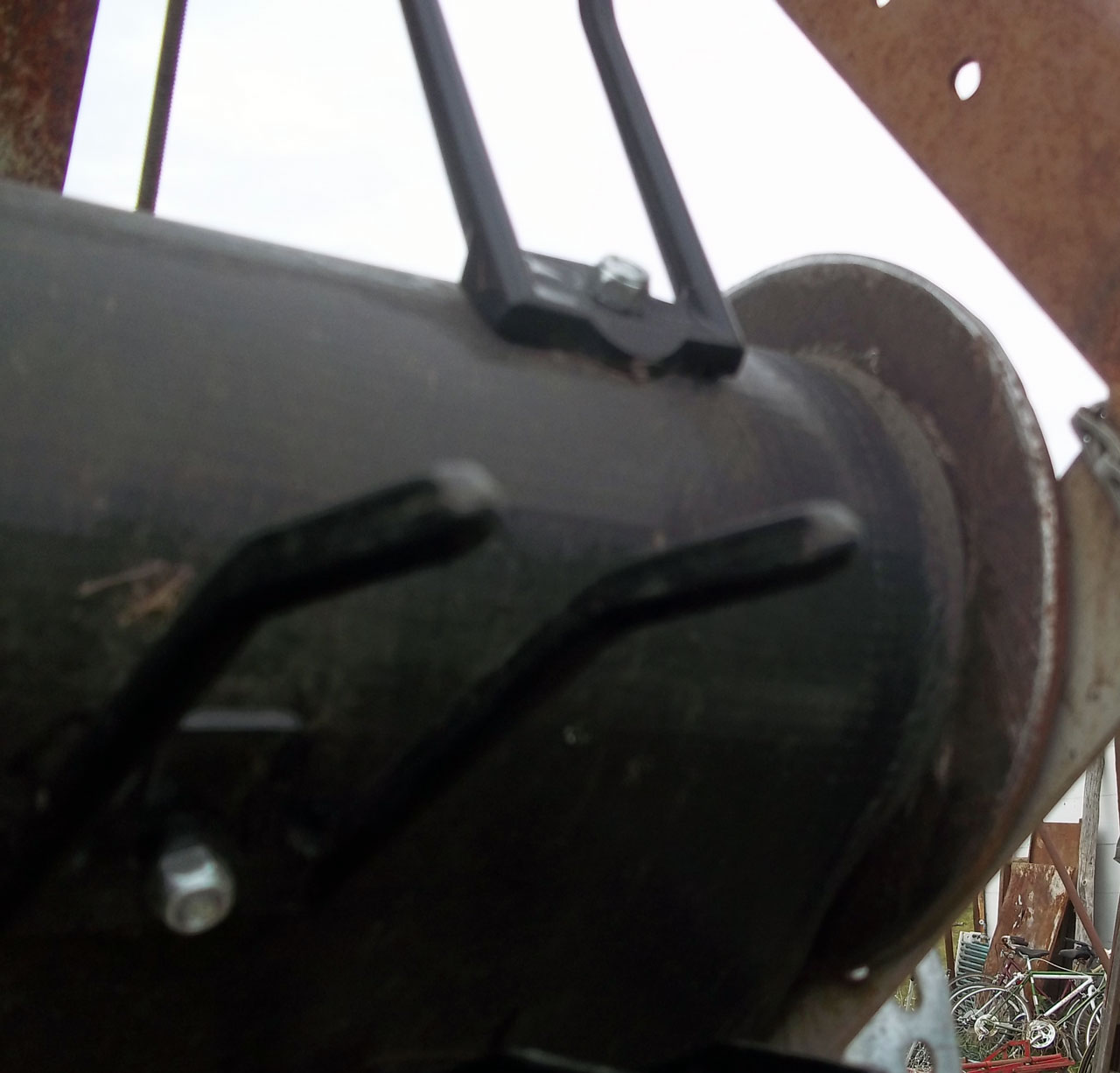 These flanges are welded to the ends of the rollers and aid in keeping the big belt centered.

I made my own rollers too. I bought some used thinwall 5 inch pipe and cold rolled 3/4 inch rod from a local welding shop. Then, I cut some short pieces of 1/2 inch rod to center the 3/4 inch rod in the 5 inch pipe. There are four pieces of the small rod tucked inside each end of the pipe like spokes on a wheel and welded tight. Next I cut some 8 inch disks from 1/8 inch plate steel to serve as end guides for the rollers, just like the rollers hay inverters use. These are set into the bearings and the whole assembly bolted to the frame.

Here are the measurements of all the drive parts that I used to give me a good elevator belt speed. The wheels are 12 inch trailer tires. They are about 20 inches tall. The drive pulley is 7 inches in diameter. The driven pulleys are 2 inches in diameter. The rollers have a diameter of 5 inches. If I were to change anything I would slow the belt down just a bit, maybe three inch pulleys on the rollers. This would hopefully reduce the power needed to run the loader. It is not a deal breaker. However, it takes three ponies to pull the entire rig. Four would be even better. Maybe next year. 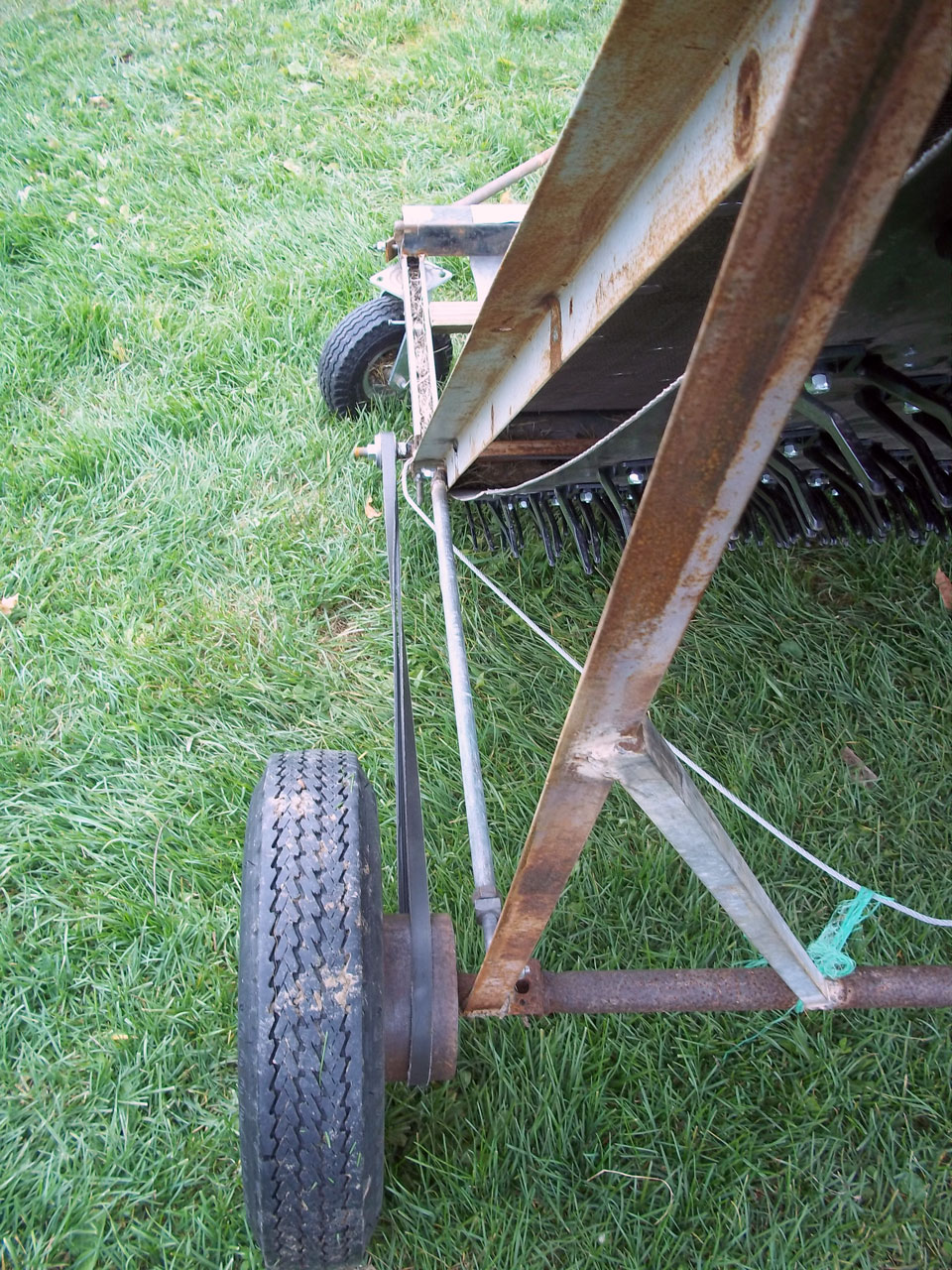 Hayloader overhead of drive facing the direction of travel.

The caster wheels are mounted on an adjustable frame so that I can set the pickup height. It is also the pull point for the loader and wagon. It has to be rigid enough to be pulled sideways when turning. The tin is mounted between the caster wheels at the bottom and a frame added at the top. Without the tin, the hay slides down or gets blown off sideways on breezy days.

As always, it is an incomplete work. It functions well but may be tweaked in the future. It is part of why I love farming with the mini horses. There is so much opportunity for experimentation. And, the little horses are just so much fun! 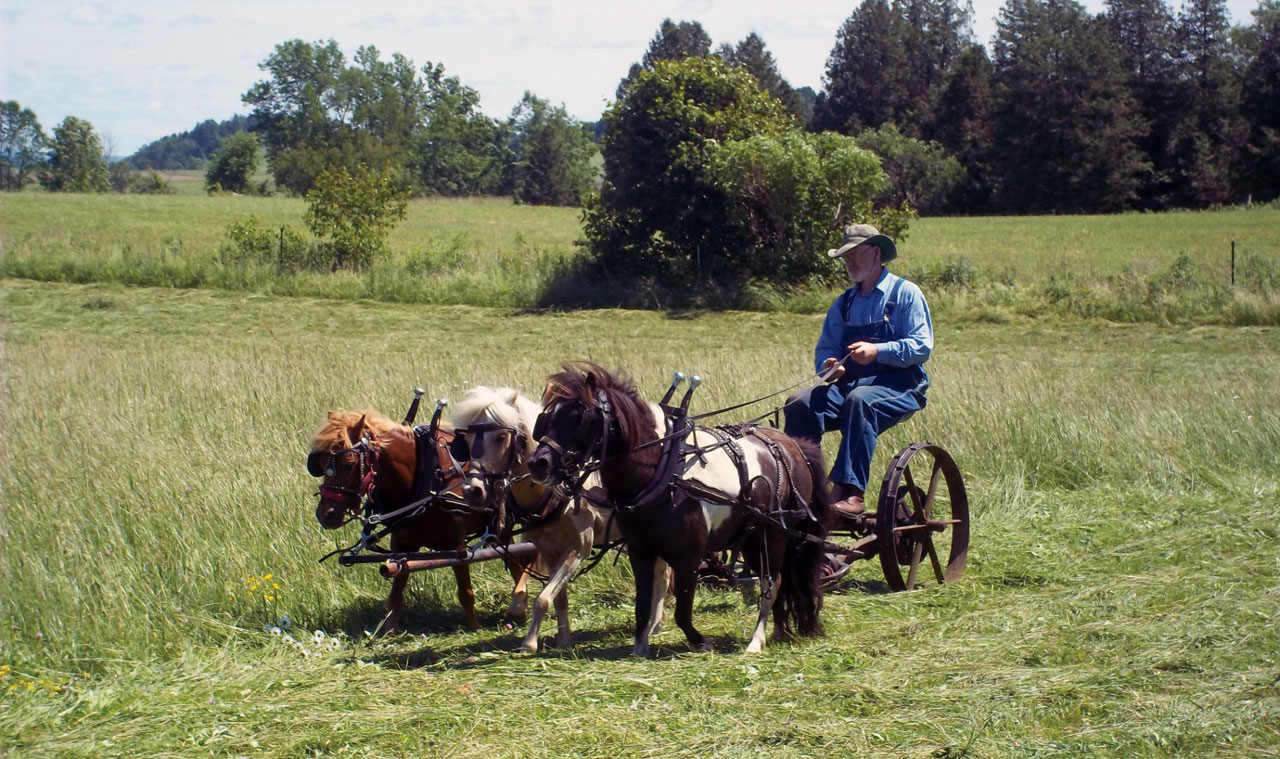