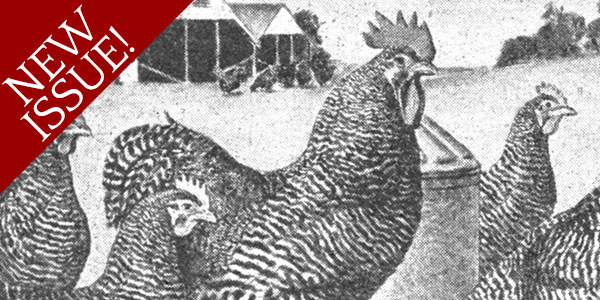 Whenever I opened the door to the hen house, he’d come at me like a wild beast straight out of Jurassic Park. I hated that rooster. Every morning he and I would go at it. After waking up to his ear-piercing cock-a-doodle-doos, I’d head to the hen house to liberate him and the hens so they could free-range, rake dust baths and lounge in the sun. I think he waited for me by the door since he was always there as soon as I opened it. He’d flap his wings and fly at me trying to make contact with his dagger-like spurs. My only defense was a broom, which I carried with me whenever I was near the henhouse. I’d swat him with it when he attacked me, which was several times a day. I didn’t want to hurt him, but I didn’t want him to hurt me either, so I never went near him or the hens without my trusty broom.

He was a large, gorgeous Rhode Island Red with deep rust and blackcolored feathers, and a brilliant red comb. His life’s work was to protect the hens, which he did with gusto. He was fearless and courageous to a fault. He confidently chased off any animal, large or small, that dared to get too close to his hens. He was so good at protecting my egg supply that I put up with his nasty disposition. I called him Henry.

One day while working in the garden, I spotted a stray dog at the other end of the property. I could tell he was up to no good. Henry saw him too and took off across the field to bravely confront this threat to his hens. Unlike the other critters that Henry chased off, this dog wasn’t intimidated by the angry red raptor heading his way. In an instant the dog had Henry clamped in his jaws and quickly carried him off into the hundred-acre orange grove across the street. I never saw Henry or the dog again. I felt bad, but my grief was short lived because now I had the freedom to walk among my hens without being attacked. But still, I missed Henry and his morning cock-a-doodle-doo. He was my alarm clock and made the day begin for me. Without him I wasn’t even sure if the sun would rise. I wondered if the hens missed him too.

One morning about a week after Henry’s tragic demise, I heard a cocka- doodle-doo coming from the hen house. The crowing was jagged and awkward and not at all like Henry’s, but it was definitely an attempt at a respectable cock-a-doodle-doo. I went to the hen house to investigate. I opened the door and there she was. One of my laying hens was crowing like Henry! She was on an upper perch cock-a-doodle-dooing her heart out. I couldn’t believe my eyes, or my ears. When she saw me, she hopped down and nonchalantly walked passed me and out into the yard with the other hens, strutting around with an attitude similar to Henry’s, but without the cocky machismo. Within a day or two, she stopped laying eggs and even began mounting the other hens. Apparently she’d decided that she was up to the task of filling the void created by Henry’s sudden absence.

Unlike Henry, she wasn’t at all aggressive so I was able to put the broom away for good. Unfortunately I had one less egg-laying hen, and the quality of her cock-a-doodle-doos needed serious work, but overall, I was delighted with my “transgender” chicken. I named her Henrietta.