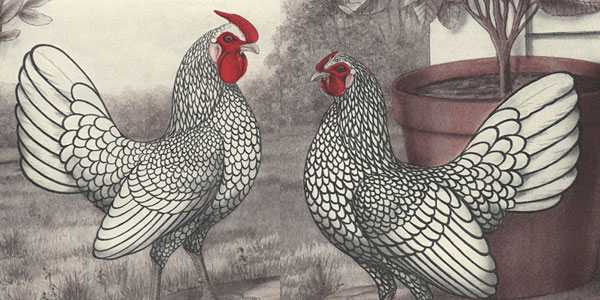 A Comparison and Evaluation of Heritage Breed Broiler Chickens on Pasture

by Wesley Hunter of Seymour, MO

The benefits of pastured poultry for small farms are well documented, and there are many excellent resources available to assist and guide the aspiring pastured broiler chicken producer. However, nearly all of these materials are concerned with the use of the Cornish-Rock Cross (hereafter CRX), a hybrid breed introduced in the mid-20th century, or in a few cases with modern hybrids (such as the Freedom Ranger). These birds are chosen for their obvious upsides: low feed conversion rate, quick rate of growth, low production costs, the broad breast and high ratio of white meat to dark meat, and ready availability.

The problem with the CRX and similar fast-growing modern hybrids is that they have certain downsides for the small-scale poultry producer. First, the birds often have high mortality and morbidity rates due to having been bred for such rapid growth and exaggerated features (i.e. a disproportionate body type). Second, the CRX (but not the slower-growing modern hybrids) was bred primarily for confinement operations and does not thrive in pasture-based systems. Third, they are less mobile due to their large size and unnatural growth patterns, and therefore are less voracious foragers and are more prone to predation. Fourth, since these birds are hybrids they do not breed true-to-type, so a farmer must purchase new stock for each batch and cannot readily improve the genetics on his or her farm through selective breeding. Each of these problems can be overcome by raising heritage breed chickens for meat, but these particular birds have not been actively selected for meat qualities for the last 60 years or more, and there is very little detailed information readily available for producers who may wish to implement a heritage broiler enterprise.

While the heritage breeds overcome the shortfalls of the CRX and similar modern hybrids, they come with their own drawbacks. They do not approach the rapid growth rate, low feed conversion rates, and low production costs of the CRX, but there is a lack of information as to which breed or breeds might serve as a potential alternative for niche markets. Thus, our proposed solution was to raise a variety of heritage breed chickens on pasture, to gain a sort of foothold regarding expected growth considerations and production costs.

We purchased 25 cockerels each of eight different breeds, to be raised side-byside in pasture shelters. Our criteria for breed selection included commonness (with preference given to commonly available “barnyard” breeds), relative size at maturity and rate of growth (no Leghorns, for example), and availability from our chosen hatchery. Further, though many breeds are available in multiple varieties, and certain differences can certainly be expected between those varieties, we chose to use only one variety of a breed so as to maximize the number of different breeds compared. Thus we settled on the following: White Plymouth Rock, New Hampshire Red, Naked Neck, Delaware, Silver-Laced Wyandotte, Speckled Sussex, Buff Orpington, and Dominique.

The chicks were hatched on April 29, 2013, and picked up from the hatchery the following day. They were all brooded together, and were moved out to pasture just shy of 5 weeks of age, each breed into its own shelter. Though I felt the chickens would profit from being allowed to free range, of necessity each breed was confined to its own shelter so that accurate feed consumption data could be collected. The birds were fed free-choice a premixed 19% protein non-GMO broiler ration for the duration of the project. Notes were made each time a breed finished a bag of feed, and at the end the total poundage of feed consumed per breed was tallied. We weighed the chicks upon pickup, then weekly thereafter for the first 9 weeks, and every other week until processing day. They were processed on farm at 18 weeks, 4 days. Each breed was processed separately, being packaged and labeled before the next breed was begun.

Once the chickens were all processed and bagged and weighed, we were able to assimilate all of the data to show growth rates, feed consumption, dressing percentage, feed conversion rates, and total costs of production for each breed. In the data that follow you will notice the Buff Orpington is absent. This is because at around Week 12 of the project we noticed that the Orpingtons were consistently the smallest by weight by a fair margin, and they seemed to be quite slow in terms of sexual development (small combs and wattles, specifically). As we took a closer look we realized that we had a pen full of pullets instead of cockerels, a hatchery mistake. Therefore we chose to cease data collection on the Orpingtons, as a comparison between pullets of one breed and cockerels of the others would have been inconsistent and therefore of little use.

In the figures that follow, it strikes me that the most significant piece of data for comparison purposes is Feed Efficiency—Dress Weight. Feed Consumption only tells how many pounds of feed each bird ate on average, but does nothing to relate that to actual growth. And Feed Efficiency—Live Weight does not take into account the significant differences in dressing percentage from breed to breed. So Feed Efficiency—Dress Weight is the key to determining how much it will cost to get each breed to the table, assuming all other costs are the same. (The only potential variable that I can see is that of initial chick cost; some breeds will cost more from the hatchery than others.) (The order in which the breeds are presented below is simply the order of their shelters on pasture; I have not ranked them according to any particular data set.)

(Note: if you were to manually calculate the dress percentages and feed efficiencies from the table above your numbers would not exactly match my figures here, as some of these numbers have been rounded to simplify the table.)

In my initial SARE project report I included cost of production per pound for each breed, but have omitted that information here. There are simply too many variables for those sorts of numbers to be useful to others. You can, if you wish, see the figures I used by accessing this grant project on the SARE website, though I will say that those numbers were specific to that particular batch of chickens and that some of them have changed considerably since (most notably chick cost and processing equipment rental/use).

Limitations of This Project

First, the hatchery and the chicks. Coming from a commercial hatchery these chicks most certainly were not the result of selective breeding for meat characteristics within the breed. If they were selectively bred at all it was for egg production or in perhaps a case or two exhibition qualities. Some, perhaps all, of the breeds I raised have been selectively bred by some individuals for increased meat characteristics, but to search them all out, arrange for a certain number of cockerels, and have them all delivered within a very small time frame would have been incredibly difficult, if not impossible. So the only really tenable option I had was to purchase from a hatchery and hope for the best. This is acceptable, in my opinion, as it is likely the same starting point of most anybody else who would start or trial a heritage chicken enterprise. Within a few generations of selective breeding significant improvements in meat type should be expected, but to what extent I do not know. Using chicks from such breeding would certainly affect my end results if this project were repeated. Given such selective breeding it is certain that each breed would become more feed efficient and faster growing and ultimately cheaper to produce, but to what extent would surely vary by breed. For example, it may be the case that the Dominique would become much more feed efficient with good selective breeding while the White Plymouth Rock, already a solid producer, might become only marginally so.

Second, the time frame and location. Summer of 2013 was mild here, but had it been hotter my results could have been quite different. Like much of the country we had a record-setting drought in 2012; one year could certainly have made a significant impact. For instance, the Naked Neck breed has up to 60% fewer feathers than most other breeds and I would expect the breed to outperform others in a hotter environment. Likewise, a breed with a more compact comb might better thrive in a colder environment, or might at least allow a farmer to extend the season one way or the other with fewer negative effects. So while I believe that my findings are mostly accurate and typical I would find it quite feasible that were a similar project conducted elsewhere or even repeated here on my farm another year the results may vary considerably in some respects. Similarly, each farm is going to have its own particular microclimate, and, of interest for pastured poultry producers, its own particular quality and diversity of pasture plants, such that the results of such a study could differ significantly even among neighboring farms.

Up until about the mid-1940s chicken meat was largely a byproduct of the egg industry. Then a competition dubbed the “Chicken of Tomorrow” was held, which paved the way for industrial broiler production. (The video is available online on YouTube, and is well worth watching.) The competition centered on a few purebred strains (there were a couple of White Plymouth Rock strains that did well) and an F1 Cornish-New Hampshire cross (which bested the others), but this focus on production eventually devolved to the point of aiming for the biggest, fattest, fastest growing chicken possible with no regard for animal welfare or table quality of the finished birds, to the point where today 90% or more of the broilers raised in America come from a dangerously small gene pool.

An increase in heritage breed chicken production among small farmers could have fairly significant impacts, most notably that a certain percentage of the control of genetics would be wrested away from large multinational corporations and into the hands of small local farmers. No, we may not see the end of the mega confinement operations in favor of small farms, but we also shouldn’t discount the very real impact we can have.

As it stands, there is much work to do to increase the profitability and competitive aspect of heritage breed meat chickens, and it is my hope that this grant project will provide for some a useful starting point for such work.