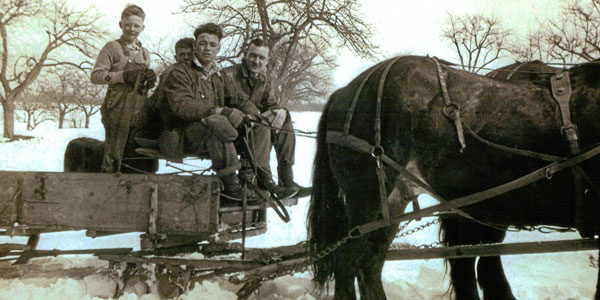 by George Vastine of Millville, PA

When folks ask me how it turns out my wife and I are so fortunate to have a son who takes interest in draft horses and their use in farming, all I can say is that from the time Luke was an infant – he arrived in 1979 – he encountered the horses on the farm that I had acquired in 1970. In fact, as he grew up, thirteen draft foals were born on the farm. At the time we were raising foals, we kept our own stallion, and over the years, we bought and nurtured three registered stallions. Once Luke’s interest grew, he helped decide that we should buy foals to raise rather than breed them.

Luke’s interest in farming has deep roots, as he’s the eleventh generation of our family to take interest in agriculture since our family, originally Van De Woestyne, emigrated from the Netherlands and then settled in southeastern Pennsylvania. My great great grandfather William Vastine eventually moved to a farm in Rush Township, Northumberland County, Pennsylvania near the village of Union Corner.

William (Old Billy) Vastine sired five sons, four of whom (Amos, Ezra, Simon and Hugh) were farmers who owned two to three farms each. The remaining son, Jacob, was a physician.

My great grandfather, Hugh Hursh Vastine (Huey), a young farmer at the outbreak of the Civil War, enlisted and served in the 172nd Pennsylvania Volunteer Infantry, where he earned the rank of sergeant. His brother, Jacob, was an army doctor. After serving, Hugh and a group from Union Corner walked home when they were mustered out.

Upon returning to Union Corner, Hugh resumed farming. He married Susan Mettler and eventually owned 300 acres, a spread encompassing three farms. He built a separate farmstead at Riverside, Pennsylvania where he raised his family: two sons and one daughter.

Hugh was a practical man. In Riverside, PA he built a dwelling with a slate roof, central heating, and also designed a spring-fed gravity system that allowed for an upstairs bathroom, all in the 19th century. He was also a frugal man who never bought anything new if he could repair the old. Hugh expressed compassion by lending money to those beginning in farming.

The eldest son, Wilson Mettler Vastine, attended Bucknell University in Lewisburg, Pennsylvania, earned a law degree, and worked in a law office in Danville, Pennsylvania. Irritated that he could not earn family approval for a spouse, he boarded a train in Riverside and settled in northern Illinois where he spent several years in the late 1800s to the early 1900s as a farm hand working for William Walk at Monroe Center and finally for John Glawe at Kirkland. (During this time, it is unlikely anyone in Illinois knew he held a law degree.) In Illinois, Wilson developed a lasting love of Black Percheron horses and the Breeders Gazette. Unfortunately, he encountered life-long health problems related to hand husking corn in subzero weather.

Wilson returned to Riverside when he learned his father was ill. He had deftly managed his finances, showing a bank balance of $3000.

Upon Hugh’s demise, Roy Hower, a tenant who had worked the land, bought two farms. The third farm in Rush Township went to Spencer, leaving 20 acres with the farmstead he (Hugh) had built and 20 adjoining acres which Wilson had acquired. Wilson also oversaw the Mettler place, a farm which had belonged to his mother and her sister Annie. He owned the Britain farm near Danville, as well. Wilson never married; he opted to live with his mother and spinster sister at the farmstead.

Wilson gained fame as an expert in raising Lancaster Sure Crop corn, Barred Rock chickens (roosters surgically caponized) and shocking small grain; he shocked the grain every year then went on vacation. He maintained an orchard where he grafted trees and also returned to a pursuit he had developed in Illinois: owning Black Percheron horses.

Hugh “Spencer” Vastine, Hugh’s second son and my grandfather, graduated from Dickinson College, Carlisle, Pennsylvania, with a law degree. Spencer established strong friendships and had fun playing sports, often against the Indians at the nearby Indian school that the government had established in order to assimilate Native Americans into mainstream American life. Near the end of his last academic term, he contracted malaria; the high fever caused him to develop epilepsy, effectively ending his hopes for a career in law. He returned to Riverside, married Sara Mettler, and set up housekeeping on one of his father’s farms in Riverside. He eventually moved to the Rush Township farm where he and grandmother raised seven children, namely five daughters and two sons.

Very interesting is that Spencer never owned a tractor. On another note, he willingly shared his agricultural knowledge with his sons. His home served as a gathering place for friends and relatives. His wife, Sara, skillfully and frugally cooked, often preparing delicious meals with whatever she had on hand. Relying on his legal background Spencer provided legal counsel to those who needed it; on an official level, he served as a justice of the peace, garnering considerable respect. Perhaps he felt compelled to excel where he could not – as a lawyer. Illness provided him with a bitter pill.

When Spencer died at age 51, his son, Hugh Hursh Vastine, then 22, married and residing with his father, assumed leadership of the farm. (My father, Edwin Mettler Vastine was 11.)

Although my uncle Hugh had only an eighth grade education, he had spent 22 years under grandfather’s skilled training. Supervising 134 acres, he was a strong and rugged man who balanced responsibility with humor. He maintained horses until World War II when he purchased a John Deere tractor. He changed to horned Ayrshire cattle. His last team, a top team of iron gray Percherons, went to close the deal on a second tractor: a new 1951 John Deere A. The war ended the BT (before tractor) era for the Vastines, and the last full time employment of a Vastine as a farmer. Within a week of Uncle Hugh’s dying at age 50, the Ayrshire herd was gone and the Berkshire hogs followed. As predicted by a close friend and neighbor, William Clark, Hugh’s passing signaled the ending of a bygone era. Eventually, the family sold the farm to buyers outside the family.

Edwin, the youngest child of Spencer and Sara and also my father, remembered forever the spring his dad died. That season, he had learned to plow with a team and walking plow, and so he continued to help out on the farm where he and his mother lived with his brother Hugh and his family. This arrangement lasted until Dad finished high school. At that time, he and his mother moved to great grandfather’s farmstead at Riverside, following the death of great grandmother, great uncle Wilson, and aunt Elizabeth.

After high school, dad graduated from Bloomsburg State Teachers College, Bloomsburg, Pennsylvania, married, and enlisted in the U.S. Army Air Force where he served as a pilot until World War II ended. Coming home from the war, he desired to farm but wasn’t able to find an affordable situation. He subsequently spent his short life as a teacher in Danville, Pennsylvania. I, the elder son of Edwin, grew up during World War II. My mother and I lived with grandmother Sara on the 20 acre Vastine farmstead. In fact, my family lived there with grandmother until 1955, at which time we moved to Danville, PA.

My dad was unable to buy the farmstead in Riverside, so the move to a Danville house was the answer. It broke my heart to leave those 20 acres where there was a full set of farm buildings, complete with the tools and machinery used by great grandfather and great uncle Wilson. During the war uncle Hugh farmed the 20 acres with his horses and when Dad returned, he used the horses until they left the farm. Having received considerable direction from his father, Dad was a skilled horseman and a fine plowman with that last iron gray team; I can recall having a hard time trying to follow him as he plowed. Noticing my interest in farming, he promised to teach me what he knew, but I would have to buy my own property. By the time I procured my own land, he was gone, and I had to seek the advice of other mentors.

By the time I was old enough to handle a team, the Vastine horses had disappeared, but I did find farmers and family who helped to keep my interest alive. My dad often shared horse stories with me, although he realized that I was born 50 years too late. However, my grandmother Sara most often shared tales with me. She had lived the life: she grew up on a farm in the 19th century, married my grandfather, and became a farmer’s wife. Often, she tried to discourage me from the old ways, but, nonetheless, she shared much with me. In particular, she described great grandfather Hugh and other family members. Eventually, she discussed Dan Frazier, a livery stable owner and jockey from Danville, who frequently irritated Spencer with deals on horses.

I graduated from Danville High school in 1960 and from Bloomsburg State College in 1964. I spent my professional career – 32 years – as a teacher. Following retirement, I worked for 6 years at a fruit orchard and then for 3 years on a horse farm. As a side, I have worked with my own draft horses at my place, for about 41 years.

My son Luke, the valedictorian of the Millville High School class of 1998 and an honor graduate of Susquehanna University in Selinsgrove, PA, makes up the next generation of Vastines interested in farming. He works for AgChoice Farm Credit in Lewisburg, Pennsylvania, and in his spare time trains/ works draft horses. He also has acquired considerable prowess in using a walking plow, particularly in creating straight rows and furrows.

Luke is maintaining that rich heritage in American agriculture, that heritage of dedication to the traditional use of horse power that served our family, even from the first ancestor that emigrated from Europe, with the intent of farming his own land. Thankfully, Luke has had many fine role models, deceased and living, who have kept that legacy alive.