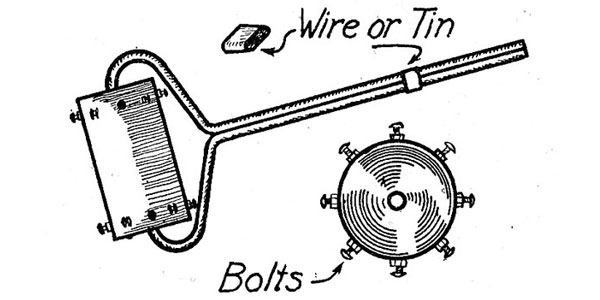 Yesterday my son and I finally got the last of the roof tiles on the new forge, so it is now weathertight except for doors and windows, and the dirty gritty stage of mud, sand and cement being trailed everywhere on our boots is over. Today I filled the hole into the house around the armoured electric cable and concreted over the narrow trench in the path, completing the electrical work done by a neighbour, so we now have lights, sockets and a 16-amp socket for the welder. After working at it most days when it wasn’t raining and some days when it was, it is a relief to have it done. But it is very gratifying too, the slightly irregular clay tiles and somewhat uneven brickwork [I blame the old handmade bricks] give it a homemade air, which is just what it is; call it hand crafted and it would be worth twice as much! Like many jobs done for the first time, and on a budget, it has taken some thought, the main complications being the roof window and the chimney. But I think it looks fine, a suitable addition to a Victorian cottage.

Now that the weather is so wet and the best thing to do on the land is to leave it alone, in our climate this time of year it is a good opportunity for building before the frosts get too hard, and since my son has been off work during our second Covid lockdown I feel we have made the best of the opportunity, not just of his thought, enthusiasm and labour, but of spending time together doing something useful.

I am reminded of the time we put up our barn seven years ago; it is a pole barn made of old telegraph poles, with timber beams notched into the poles and bolted on. Because the poles are basically tree trunks, they are narrower at the top, so making sure the siding would be vertical meant that the notches became progressively shallower as they neared the top of the poles. All the notches were cut out with a chainsaw, hatchet and drawknife and laid out bent by bent, side by side, nailing a piece of wood on the end of each pole so it couldn’t roll and using a level to get the notches parallel. Once done, Molly dragged the poles to the field on a home-made timber arch, and then the big day came for putting it up. I asked a dozen friends to help, mostly smallholders and other practical people, explained the basic plan, and everyone got to work. One friend who is not used to hands-on work was a bit confused and surprised to see everyone working together without being told what to do, so I got him to help me so I could explain things, but mostly it got done by people seeing the need to assist in manoeuvring the poles as they dangled by a chain from the telehandler belonging to a local farmer, or moving a scaffold or passing up beams. Once the first post was in the ground, supported by rails nailed to temporary stakes to keep it upright and in the right place, the rest went together like big pieces of Meccano, so by the end of the first day all the posts were in the ground, joined by the horizontal beams, with one pair of rafters also in position. Having spent hours drawing it out, working out the detail of how it would fit together, so for instance, the whole barn fitted under standard sized roofing sheets, and days preparing it on the ground, to see the structure against the sky after the first day was a real buzz. But not just for me, everyone involved was pleased to have been involved, to have been fed at midday and to see this huge visual affirmation of their collaborative work. As we packed up, I asked the farmer with the telehandler, who I didn’t know very well, how much I owed him for his day’s work. His reply was that if I paid for his diesel, that would be enough because he had enjoyed the day so much.

Earlier in the day, Des, a newly retired neighbour who was out walking his dog asked if he could help. Although we already had plenty of hands, Liz noticed how keen he was, so I agreed. After another community day the following weekend to put up the roof structure, over the next couple of weeks it was Des who came to help put on the roofing sheets and to install the track for the hay trolley, always ready with the right tool in hand to pass to me as we worked high up to put together the complicated construction over the projecting part of the hay track.

The barn is not a very big barn, but I couldn’t have done it on my own. When it was in the planning stage I got a price from a company to put up the steel frame and roof it, but even without the siding, the joists and the hay floor it would have cost four times as much as I have paid for everything. If I had gone down that route, I would still be saving my pennies. Used virtually every day over the last seven years, the barn has been a great asset, used in different ways, to harness the horses, to store hay, straw and equipment, so over time I have come to own it in many different ways. But one of the best things about the barn is that when I went to do the horses the morning after putting in the posts, Mike, who worked to get the posts in upright, was leaning on the gate, his dog at his heel, talking to Des who had spontaneously come with his dog from the other direction. They were renewing a day-old acquaintance and together appreciating the fruits of their endeavours, affirming their ownership of the process, and of the slowly changing landscape of this small corner of rural England.