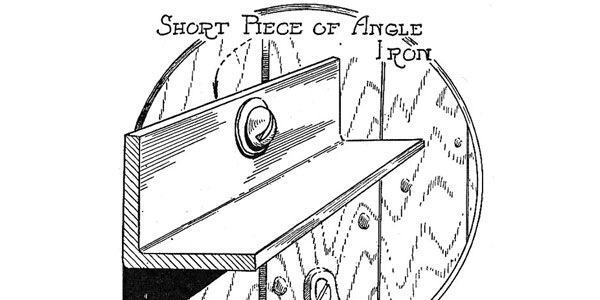 It has been a cold week this week by our standards; the daytime temperatures rising only a degree or two above freezing with the ground remaining hard, so there has been little to do outside, and even less incentive to be out there. In these conditions, even walking along the road with a horse on thin compacted snow and ice is challenging some mornings, so a long lead rope and a horse that will walk five feet away from you, one that will pick its way on the less slippery bits, is a great help. One warmer morning when there was no frost I did use the horses to refill the water bowser, but that has been the only horse work this week, and since then I have been topping up the trough whenever it has been warm enough for the valve on the bowser to turn.

Otherwise I have been in the workshop and feel lucky to have useful work I can do inside. Though not a feature of recent Januarys, often at this time of the year we would spend a couple of days inside making sausages, salami, pâté, lard, bacon and ham, a productive way to spend a cold weekend after sending off our three pigs to slaughter. Not having had any pigs for a few years, I miss the pork and preserved products, and I miss not having the pigs through the autumn and winter. It wasn’t a conscious decision to stop keeping pigs, it’s just what happened. It’s appealing to think that life will become easier and less hectic as you get into your fifties, but that has not been my experience, and having pigs is one activity that has fallen by the wayside. The other factor has been the mud, because although keeping pigs until late November or December would suit us better, partly because they use a lot of energy in winter just to keep warm, with the slaughterhouses running at full capacity to meet the Christmas rush, we always kept ours until the new year. By then, their large enclosure was sometimes a sea of mud, so with the winters getting wetter I am not sure we will have them again.

I do miss pigs, though; there is something splendidly piggy about a pig, perhaps it has something to do with their intelligence, but also with their earthiness. They are great entertainment too; as my then three-year-old daughter said in response to a question at the end of one year, the year we moved here and had two pigs to dig what became our vegetable garden. ‘What did you like best about this year?’

‘The pigs,’ was her immediate response.

‘What is it about the pigs that you like?’

‘Everything that pigs do,’ she said. I can’t disagree.

Those two pigs were the first animals we had here, before the chickens and before Molly came as a weaned foal, and I still remember the day they came. Having kept pigs as a teenager and having learnt the hard way about their abilities of escape, I had made a run of stock netting with barbed wire along the bottom and top, with a strand of electric fence inside as extra security. After lifting the first little pig from the crate into the pen, I got the second wriggling squealing pigling and put it on the ground, but instead of running off to the far corner, it stood motionless, seemingly stunned by being outside for the first time in its life. After twenty seconds, it grunted a little, sniffed the air, lowered its head, sniffed again and put its snout to the ground, then right into the ground, levered its nose forward, blew out through its nostrils and dug; as I say, there is an intrinsic earthiness about a pig.