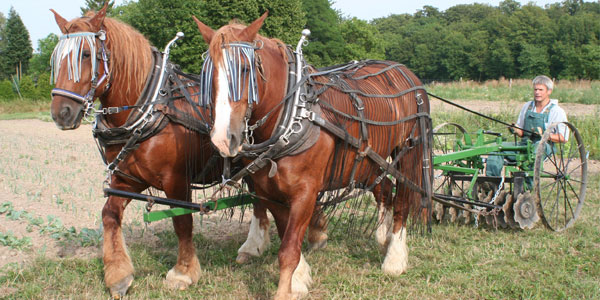 Horse Labor Instead of Tractors 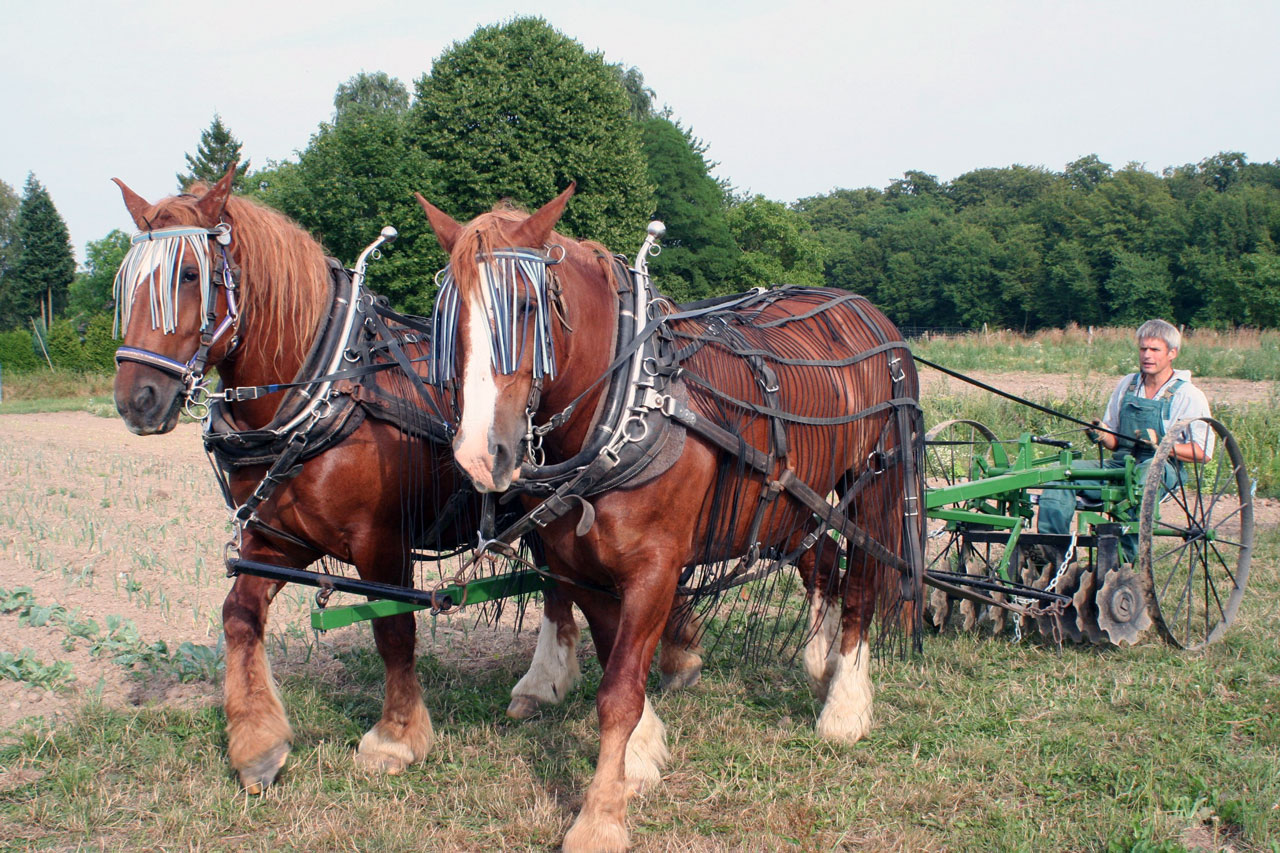 Horse Labor Instead of Tractors

In an industrially advanced country such a Germany, the use of the tractor has been the primary source of power and the drive of the farming industry for the past 50 years. The application of tractors and other machinery have proved to be a quicker and more powerful means of force than animals, and thus replaced animal labor. Tractors increase agricultural production from the meat to the dairy industry, and allow greater work with less manpower. About 50 years after the first implementation of tractors in the farming industry, comes the question of what farms give up for this technological advancement and comfort. In Germany 9 out of 10 people live in suburban areas, but the extent to which this affects the amount of machines used for agriculture is not covered in this study; the direct effect of high suburban populations in relation to the need for quicker farming technologies has yet to be calculated. The direct effects of machine use (i.e. tractors) instead of animals will be further examined here; effects on the farm land, the required energy supply, and the effects on the environment. Horses, next to cows and oxen, were the most useful animals for farming until the 1960s. The results of a test operation, started in 2005, using horse labor instead of agricultural machinery will be explained in this report.

The Physical Impact of Tractor Use on Farm Land

The emergence of increased tractor use on farmland carries with it the pressing issue of soil compaction, due to the heavy agricultural machines. In Kanton Bern, Switzerland, for example, the amount of land acceptable for planting crops has been reduced by 25%. Roughly 30 million hectare of land in Europe are irreversibly compacted from heavy machine use. In a loamy soil at Baden-Wu?rttemberg, Germany, it took ten years of natural methods to loosen up compacted soil. In a model test on existing Albic Luvisol ground, a fertile clay-boulder-sand mix left by glacier deposits, the compressed layers of subsoil were still unchanged 22 years after farming with heavy equipment had terminated. The use of tractors creates this compacted soil, resulting in a drop of profits, as well as water erosion due to the decreased ability to absorb water, increasing the risks of serious floods.

A Norwegian-made tool carrier called the “Troll” is set up with finger-weeders for a row crop cultivation at Hof Hollergratben.

The worldwide supply of crude oil will eventually run out and thus the search for alternative energy sources has already begun. The agricultural industry could profit by comparing the energy efficiency of its machines, i.e. tractors, with animal labor. If horses prove to be more efficient, their heightened use will not be a return to primitive farming methods, but instead a development, since the latter can be sustained through regionally found renewable resources (pasture and homegrown forages). In Germany, 13% of greenhouse gasses come from agricultural practices, through the burning of fossil fuels in tractors. At the same time, the agricultural industry is the only one that can theoretically eliminate more greenhouse gases than it produces. In all areas of comparison, tractors are considerably less energy efficient when compared with horses; horses can utilize energy from raw renewable sources to a much greater extent than tractors. The “green-balance analysis” — an energy appraisal system for the suitability of industrial productions created by the German Federal Environmental Agency — rates live horse power higher than tractors. In Sweden in 1927, 60% of the needed energy for farming came from renewable sources, whereas by 1996, due to machinery, that number rests at only 9%. It takes 232 kilograms of corn to produce 50 liters of bioethanol for tractor fuel. That amount of corn could feed a child in Zambia or Mexico for a year. Workhorses can be substantially fed off the land, having a slight, but positive effect on human consumption and nutrition by freeing up grain formerly used for bio fuels. 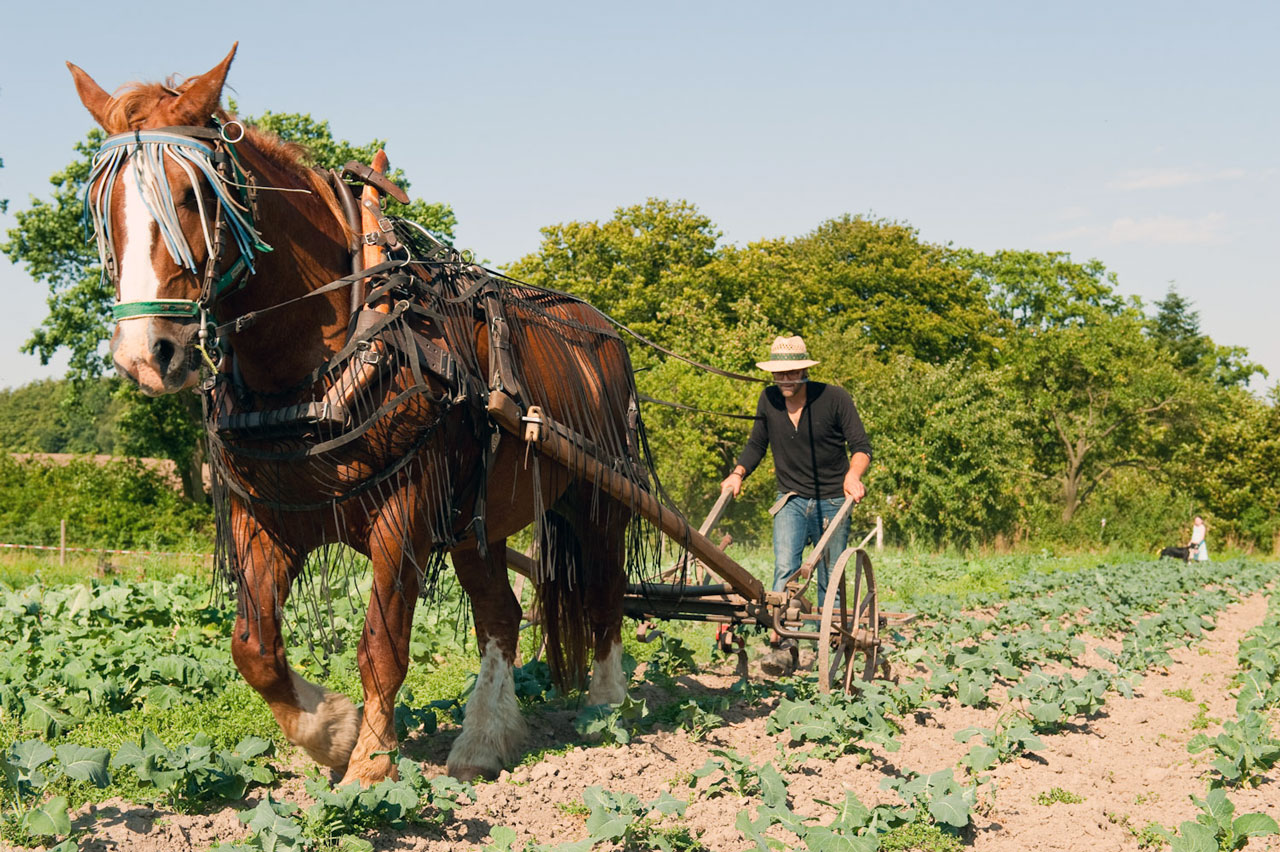 There has been a steady increase in the extinction of various species in the last 100 years. One cause of this issue stems from the agricultural industries, which have greatly advanced in the past century through the use of machines, particularly tractors for farming. Today the regular use of tractors for services such as mowing and plowing has decimated various species of amphibians by about 90%, whereas with traditional horse drawn farming equipment that number would rest at only about 10%.

Impact of Horses on the Ground

Confirmed facts justify this proposed question: is the tractor the most beneficial source of power for agricultural production? On one German farm, with 22.5 hectares of productive land, the project “Hummusspha?re” has evaluated the ability to regenerate compacted land through the use of horses; also evaluating what type of energy balance arises from this change in applied work forces. 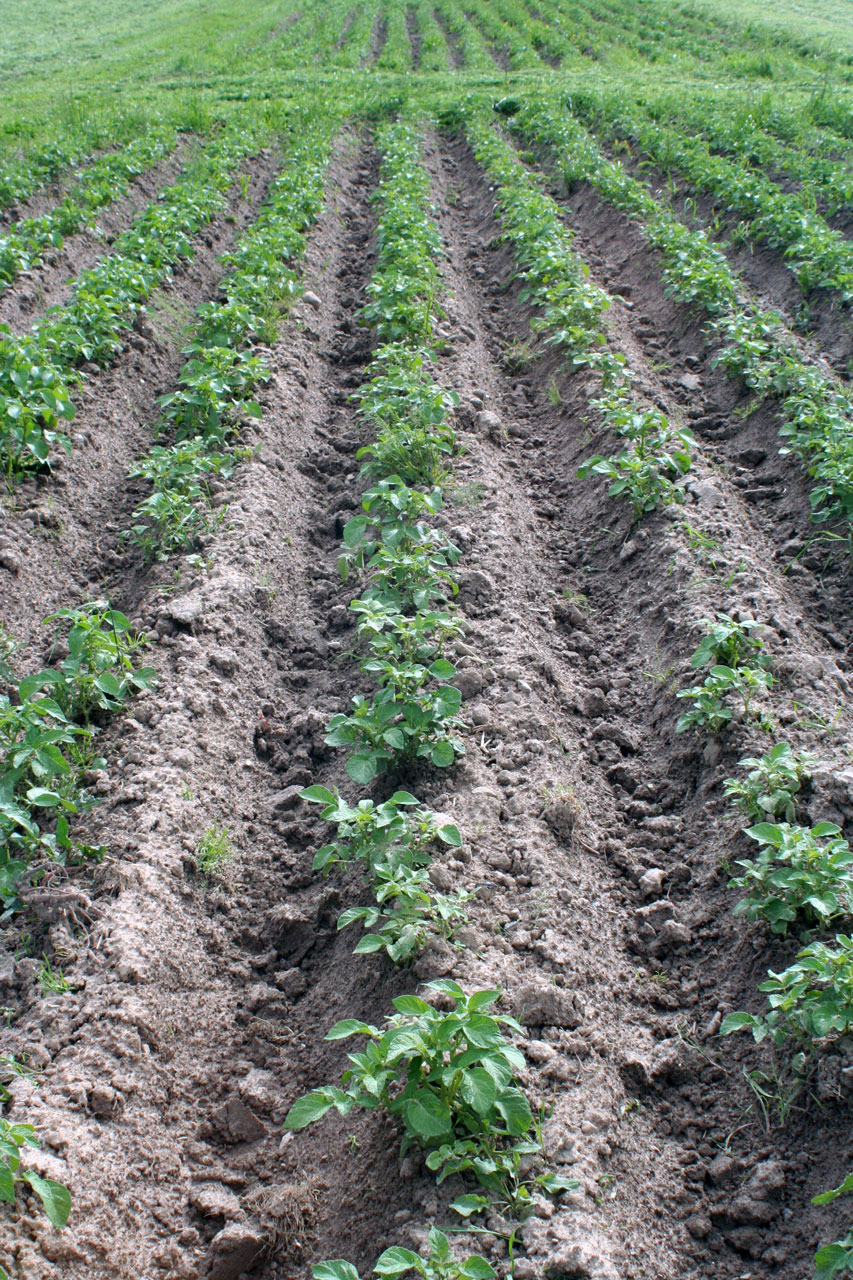 Parcel worked by horses after 30mm of rain.

In 2005, 3 different parcels of land were committed for a series of tests to directly compare the impact of tractors and horses on the land; each parcel is 200 m2 in size and was tested to ensure identical physical characteristics and properties. The land parcels were divided and subsequently worked for 3 years. One side of each parcel was worked only with horses and the other only with tractors; the land was always worked with the same tools and at the same time; the tractor employed for this trial was actually lighter than two draft horses typically used for farming.

By 2008, there were measurable differences between each side of the worked areas; the land’s capacity to hold water and greater aeration were up to 45cm higher in areas worked by horses as opposed to tractors. Thus, it would appear to be more beneficial to use workhorses instead of tractors on damaged and compacted farmland. The benefit and profit every year of each land parcel on the horse-worked side is at least 15% higher. 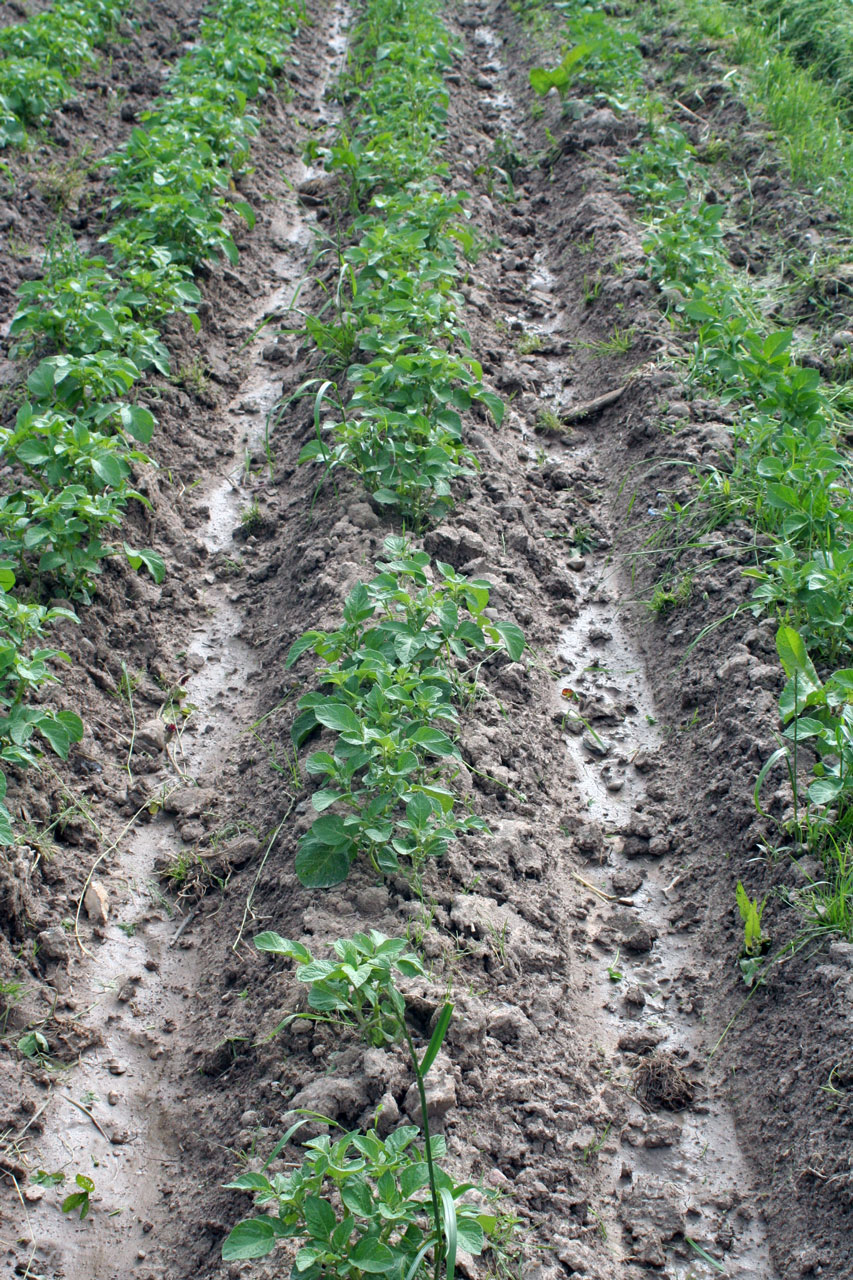 Parcel worked by tractors after 30mm of rain.

If on a given farm 60% of the work is accomplished through horse drawn equipment the overall fuel consumption is minimized by about 30%. If a suitable solution to financially support more wages could be found, it would be possible for many small farms to switch over to only draft horse-power within 2 years. Thus, the use of fossil fuel on these farms could be completely eliminated.

Apart from the ability of tractors to work large areas, this technology doesn’t have many other positive attributes, but instead has decidedly negative ecological effects. Therefore, it is wrong to depend on tractors as the only means of power in the future of agricultural cultivation. The results of various test farms in Germany show that to replace machines with workhorses, in highly developed countries, can help regenerate unusable, degenerated, and compacted farmland. Developed nations have the ability to create an economical system, and should exercise this, to permit the financial means for further cultivation through horses. However, these developed countries also have a problem since there are presently neither enough workers to oversee the workhorses on farms nor to pass on their skills and knowledge. In countries where traditional methods of animal labor are still in use, the knowledge about animal care is an important resource, one that is now lacking in highly developed countries. Perhaps if the feasibility to finance (farm) wages once again becomes higher, the exercise of animal labor will become more preferable. 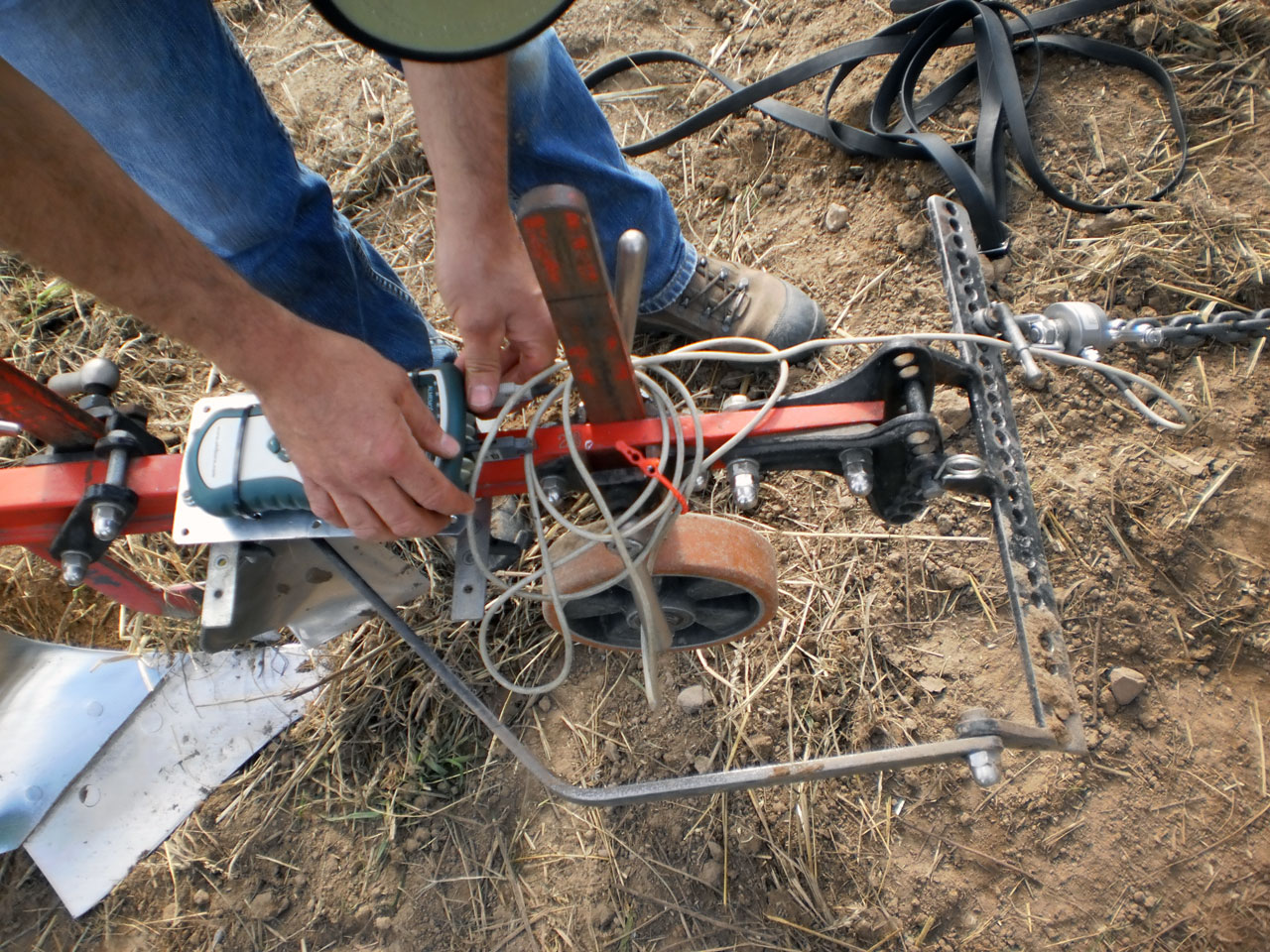 Pull power measurement on the plow.

Klaus Struber is a dedicated spokesman for the use of draft horses in agriculture. He has promoted the draft horse through his own farming practices and by writing articles, doing research, giving seminars, making machinery, and much more. Klaus farms at Hof Hollergraben in Shleswig-Holstein, Germany, a 50-acre bio-dynamic farm growing over 40 different varieties of produce for a CSA as well as grain for fresh-baked bread plus hay and forage crops.