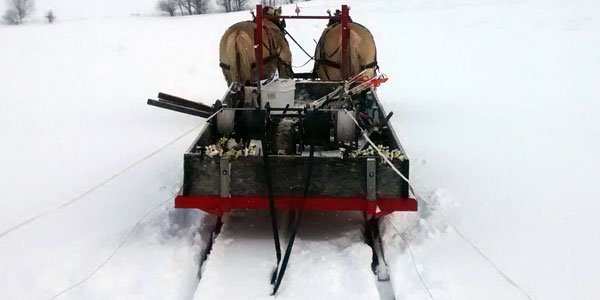 by Tony McQuail of Lucknow, ON

We were planning on having our cattle out in a sheltered field for the winter but a busy fall and early snows meant our usual fencing tool was going to be ineffective. Through the grazing season we use a reel barrow which allows us to carry posts and pay out or take in wire with a wheel barrow like device which works really well. But not on snow. I needed to put up some temporary fencing to move the cattle to their winter pasture and I needed to put up some more permanent high tensile wire to define several of the boundaries of the field. This was the motivation for turning our sleigh into a “snow fencer” or a “sleigh barrow”. 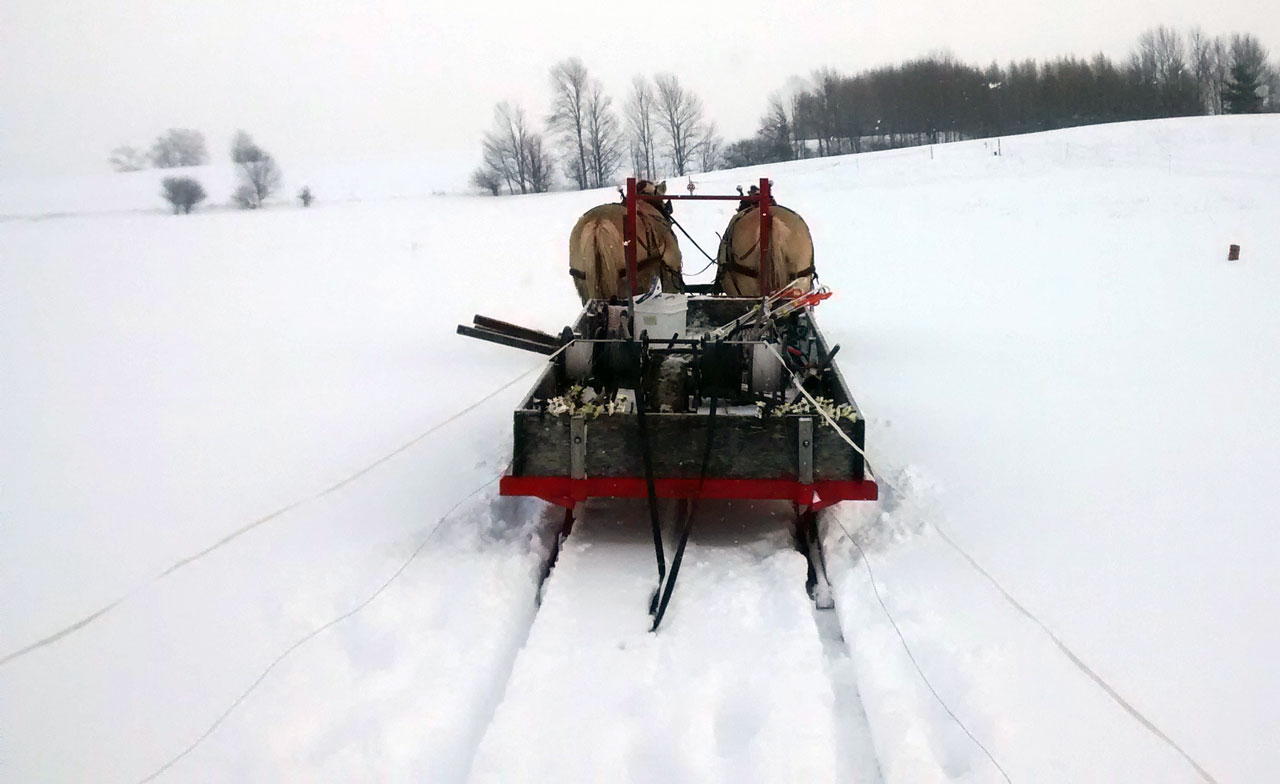 Using a team of horses to lay out both sides of a temporary winter laneway to and from our winter pasture with two-strand fences for both sides — a top of polytape and bottom of maxishock.

My sleigh has a board around it on the sides and back. I mounted an inch and a half U-bolt on the back board half way up the board. I could then hook a portable fence reel to this. I put line extensions on the lines so they reached to the back of the sleigh and loaded portable fence posts into the back of it. I pulled the sleigh to where I wanted to start the fence. Hooked the portable wire to an end post and started driving the horses along the line of the temporary fence. If the snow was not too deep I’d walk saying whoa on the twelfth step so we would stop at 15 and I’d put in a post. The system worked well. When moving, the tension on the wire would pull the reel up and away from the board, and the wire would pull off smoothly. When we would stop, the reel would fall back against the board and be braked, so the wire would stop paying out. For the straight parts of the run I’d use steel tread-ins with plastic screw on insulators and at curves I’d use pig-tail tread-ins. At the other end I simply attached the reel to a post — tightened up the wire and used a jumper with alligator clips to connect it at both ends to existing fencing.

If the ground is frozen you can use a sledge to drive the steel posts in or a portable electric drill with a 1/4 or 5/16 inch masonry drill bit to pre-drill a post hole in the ground after using your foot or a flat shovel to clear the snow off the ground.

After the success of the temporary fencing I decided to use the sleigh to put out the High Tensile wire as well. I used another U-bolt to mount my high tensile spinner on the side of the sleigh. I used my chain saw to cut a shallow groove on the inside of the board for the anti rotation pin of the spinners base. The spinner base was thus held securely in a vertical position and unable to rotate. I had to cut the groove because the side board was wider than the space between the large ground spike and the anti rotation pin. With a smaller side board I could have just dropped the spike through the U bolt on the outside and have the pin engage the side of the board on the inside to keep the base from turning. I could then set the top of the spinner with its load of high tensile wire on the base and was ready to go.

The first piece of fence I needed to put up was along a road so I drove the sleigh to where I wanted to start. I used polyethylene rope to tie an insultimber dropper to a tree, attached the high tensile wire to the middle hole on the dropper and then drove the sleigh along the snow covered shoulder of the road putting in posts and putting the wire in insulators as we moved along. I used tread in steel posts with screw on insulators. When I got to the other end of the fence I again tied an insultimber dropper to an appropriate tree and tied off the high tensile wire to it in the same hole as the other end. To do the second wire I turned the sleigh around, attached the high tensile wire to the top hole on the dropper and strung the second wire. I found that I needed to use my hand to brake the spinner when I would stop to put in posts or insulators to keep the wire from over spinning and developing slack. Once the second wire was attached to the end dropper I turned around and put daisy wheel tighteners in the middle of the wire run and pulled the wire snug. This was fine for awhile but we soon realized as the snow kept coming in December and the plow started pushing it over the fence that we needed taller posts so I ended up taking the sleigh back out with T-posts, T-post insulators and a post pounder. I loosened the wire and replaced the tread in posts with T bars and raised the 2 wires above the growing banks. 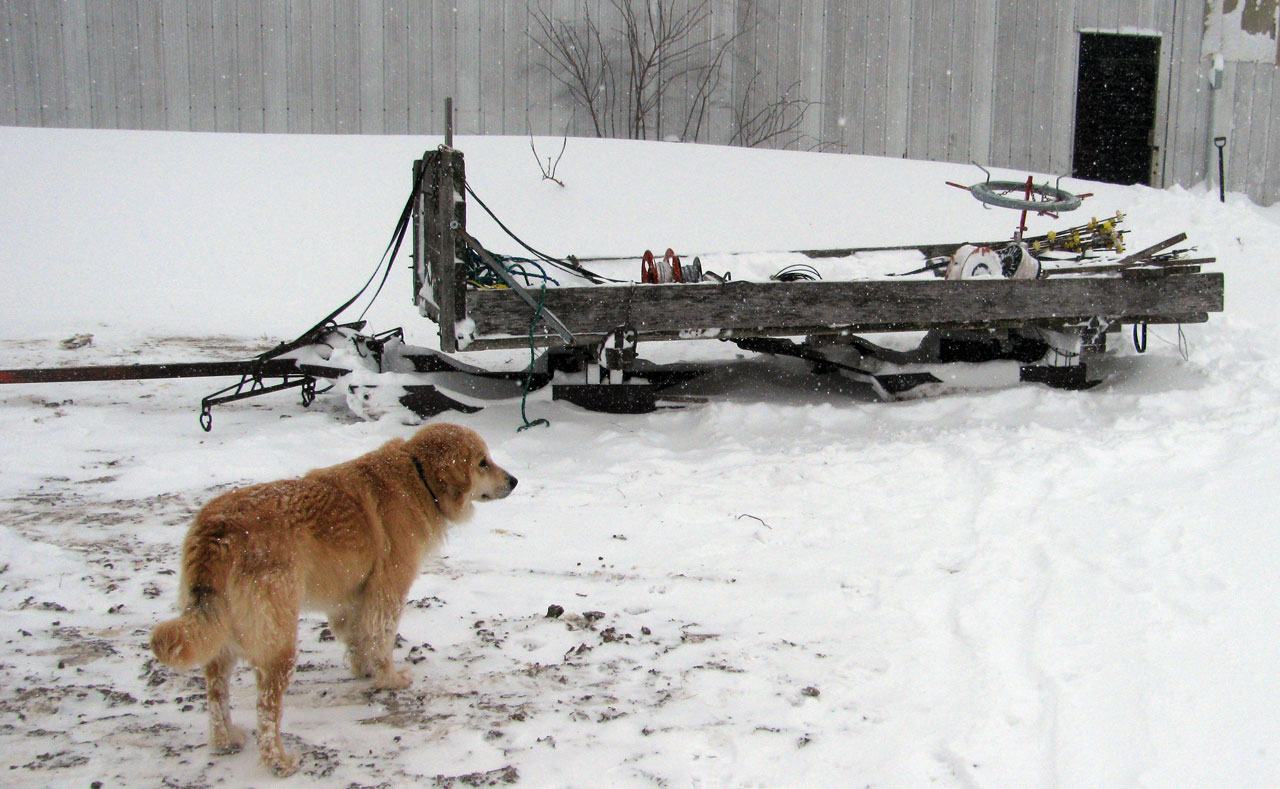 Sleigh set up for winter fencing with a high tensile wire holder/unroller mounted on the side.

The other area I needed to high tensile fence was the property line which was in a wooded area. I parked the sleigh with the spinner positioned as close as I could get it to the fence line. Cross tied the horses between a couple of trees and set off into the woods pulling the high tensile wire which I had attached to a dropper. I pulled it to the road corner where I tied the dropper to the tree. Then I returned to the sleigh, cut the wire and attached it to a tree. I took in tread in posts and strung the first wire and then repeated the process for the second wire and again tightened it up with daisy wheels.

I used temporary fencing that was a combination of polytape and maxishock to make gate ways into the field and used alligator clip jumpers to connect the various sections of fencing together. By dis-connecting a jumper cable I could easily check if power was feeding around the fence. It could also help me determine which section of the fence had a short on it. The boundary fence was particularly at risk of serious shorts because of lots of old fencing wire abandoned in it.

After using the sleigh for winter fencing, we use it when we want to put up a large amount of temporary fencing in the summer. The sleigh lets me carry a much larger selection of posts, wire and tools than I can with the reel barrow and the sleigh slides, and is lower than my wagons, which makes it handier for walking behind and putting in posts. I found I could mount the reel barrow in the sleigh so that I could pay out several rolls of wire at once. ( I haven’t figured out how to use the sleigh to roll up several wires at once — but that is where I use the reel barrow on it’s own.) The sleigh as a fencing tool has proved a pretty useful implement both winter and summer.