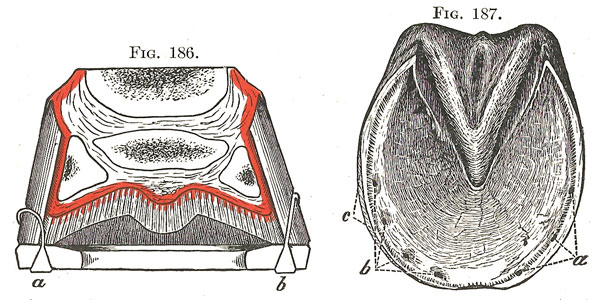 A Text-Book of Horseshoeing

by A. Lungwitz and John W. Adams Copyright 1897

The boundary between health and disease of the hoof is difficult to determine, especially when we have to deal with minor defects of structure or shape of the hoof. Ordinarily, we first consider a hoof diseased when it causes lameness. However, we know that diseases of the hoof may exist without lameness. Therefore, a hoof should be regarded as diseased or defective when the nature of the horn, the form of the hoof, or the parts enclosed by it, deviate from what we consider as normal or healthy, whether the service of the animal is influenced by it or not.

The indications of the various diseases of the hoof are discussed in the following chapters. We shall in this chapter undertake only a brief general discussion of inflammation of the pododerm. This inflammation, known as pododermatitis, always manifests itself by lameness and, under closer examination of the foot, by increased warmth, pain, and stronger pulsation of the digital and plantar arteries. The pain produces either a timid, shortened (sore) gait, or well-marked lameness, especially upon hard ground. Increased sensitiveness of the pododerm is detected by compression of the hoof with the pincers (hoof-testers), or with greater certainty by lightly tapping the hoof. The increased warmth of a part or of the entire hoof is detected by feeling with the hand. Intense pain and greatly increased warmth, with a moderate, diffuse swelling of the soft parts between the hoof and fetlock-joint, indicate suppuration within the hoof.

The examination of horses lame in the feet must always be cautious and searching, and should begin with the moving and judging of the horse as already described. The faults detected in the hoof or in the shoeing, the pain and increased warmth of the hoof, will not leave us in doubt as to whether the animal is lame in the hoof or not. However, should there be a doubt, we must carefully examine all the joints and tendons of the foot and, if necessary, of the limb above, and observe the animal’s manner of travelling at a walk and at a trot, on soft and on hard ground, in a straight line and in a circle.

The removal of the shoe should be performed with greatest caution. Under certain conditions the second shoe should not be removed until the first has been replaced. The same caution must be observed in paring the hoof, which is to be regarded as a part of the examination of the hoof. The paring of a hoof for this purpose often differs somewhat from the preparation of a sound hoof for the shoe, and while it is necessary because it frequently furnishes the first trustworthy indication of the trouble, it must be done with circumspection and intelligence.

The causes of diseases of the hoof are very numerous, for many external influences act injuriously upon the hoof. In addition to too great dryness, want of care (neglected shoeing), and premature, unreasonable, cruel use of the horse, should be mentioned particularly injudicious dressing of the hoof and direct and indirect faults in the shoeing. The pododerm, shut in between the hard os pedis and the stiff, unyielding horn capsule, is frequently exposed to bruising and other injuries, from which arise most of the defects of the hoof itself. All these things lead, under certain conditions, to lameness. 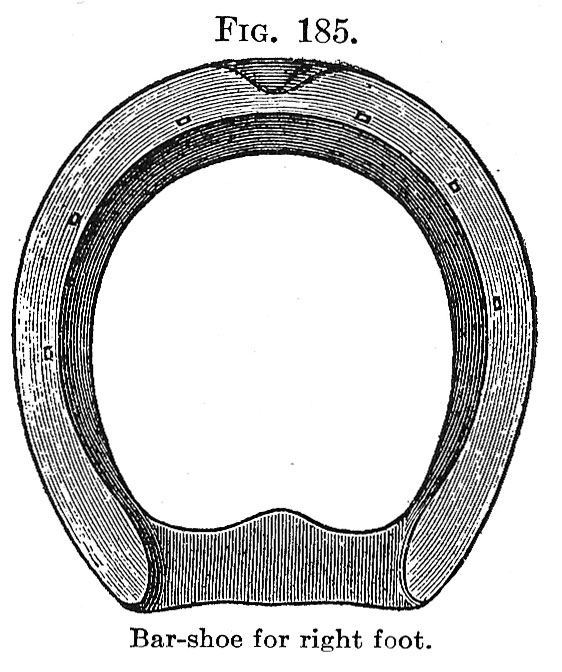 Treatment. — First of all, the discovered causes should be removed, or, if this is not possible, as is frequently the case, they should be ameliorated. Very often the lameness may be removed by proper shoeing, a change in the animal’s work, and better care of the hoof. When there is intense inflammation within the foot, the shoe should be removed for a few days. When the inflammation is moderate and confined to a small area, it is usually sufficient to alter the shoeing by regulating unnatural relations of height in the different parts of the wall, and by removing all superfluous horn from the wall and sole (to a less degree from the frog), partly for the purpose of rendering the horn capsule more yielding, and partly to make the poultices which are used more effective. The shoe is then to be so applied that the diseased region will be relieved of the bodyweight, and will remain free from all pressure from the shoe. This can be done partly by making the underlying branch of the shoe somewhat wider and longer than the other, and partly by cutting down the bearing-edge of the wall where this is possible without weakening it too much, otherwise by concaving or beating down the upper surface of the shoe. By reason of the fact that the posterior half of the hoof is the seat of most diseases of the hoof, it is to be recommended that the nail-holes in shoes used in these diseases be placed as far as possible in the anterior half of the shoe, and in some special cases distributed evenly around the toe. Among shoes suitable for diseased hoofs the bar-shoe (Fig. 185) holds the first place, because it renders superfluous many other shoes specially designed for various diseases of the hoof. It is made like an ordinary flat shoe, except that it requires a somewhat longer piece of iron; the ends of the branches are bent inward over a dull corner of the anvil, bevelled, laid one over the other, and welded together to form the bar. The width and thickness of the bar should be the same as of the rest of the shoe, and its frog-surface should be slightly concave.

The bar-shoe is valuable, because it protects from pressure diseased sections of the wall which have been laid free, allows part of the body-weight to be borne by the frog, and restores normal activity to the disturbed physiological movements of the foot. By using it we can either gain a more extensive bearing-surface for the hoof, or can make it easier for the surface that bears the weight to do the work. If on account of weakness of the bearing-surface of the hoof, or from any other cause, we wish to distribute the body-weight over the entire plantar surface of the foot with the exception of the painful region, we add a leather sole to the bar-shoe.

In this case it is necessary to place holes in the ends of the branches of the shoe, so that we may rivet the leather firmly to the shoe with small nails. The shoe should be made somewhat wider than the hoof, and the clips somewhat higher than usual. After fitting the shoe the grooves for the clips are cut in the leather, the latter is riveted to the shoe, and all leather projecting beyond the outer edge of the shoe is trimmed away. The lacunae of the frog and other concavities of the sole are then thickly smeared with wood-tar and afterwards filled up with oakum to such a degree that the packing will bear some of the body-weight when the shoe and leather sole are in position. This packing is of great importance, because it prevents the filtering in from behind of sand and slime, preserves the toughness and pliability of the horn, breaks shock, and produces a gradual expansion of the posterior half of the hoof. Before nailing the shoe to the foot the leather sole should be soaked in water.

Classification of Diseases of the Hoof.

DEFECTS OF THE HORN CAPSULE AND LATERAL CARTILAGES.