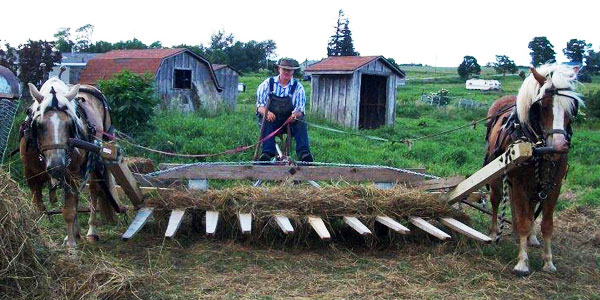 I Built My Own Buckrake 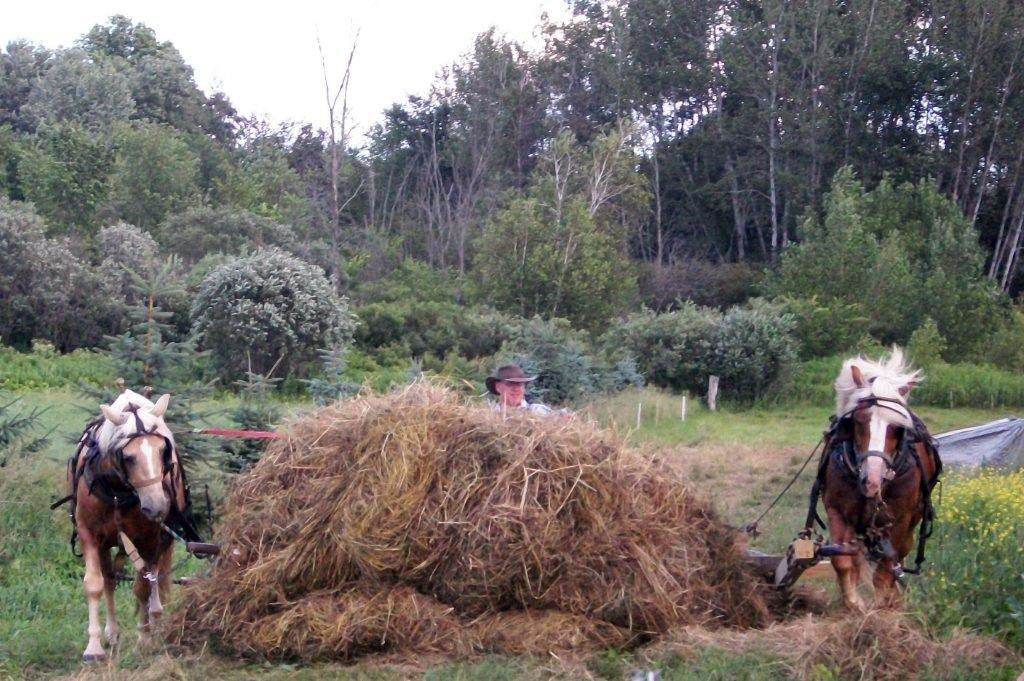 Buck on the left and Atlas on the right pushing a big one just for show.

I Built My Own Buckrake

One of the fun things about horse farming is the simplicity of many of the machines. This opens the door for tinkerers like me to express themselves. Sometimes it is just plain nice to take a proven design and build one of your own. Last spring I did just that. I built my own buckrake. I’m proud of the fact that it worked as it should and that my rudimentary carpentry skills produced it.

My buckrake is built for Haflingers. The basket is 10 feet wide and 8 feet deep. The full width is 14 feet with horses in place and it is 16 feet long. I probably could have made a full-sized rake, but my ponies are smallish and I didn’t know what they could really do. After all, it takes all three of them to pull my 5-foot McCormick #9 mower! I had two 18 inch, steel wheels that fit a 2 inch pipe nicely so they became the foundation of the rake. The caster wheel came off an old pickup header from a self-propelled forage harvester. The wood is dimensional lumber. 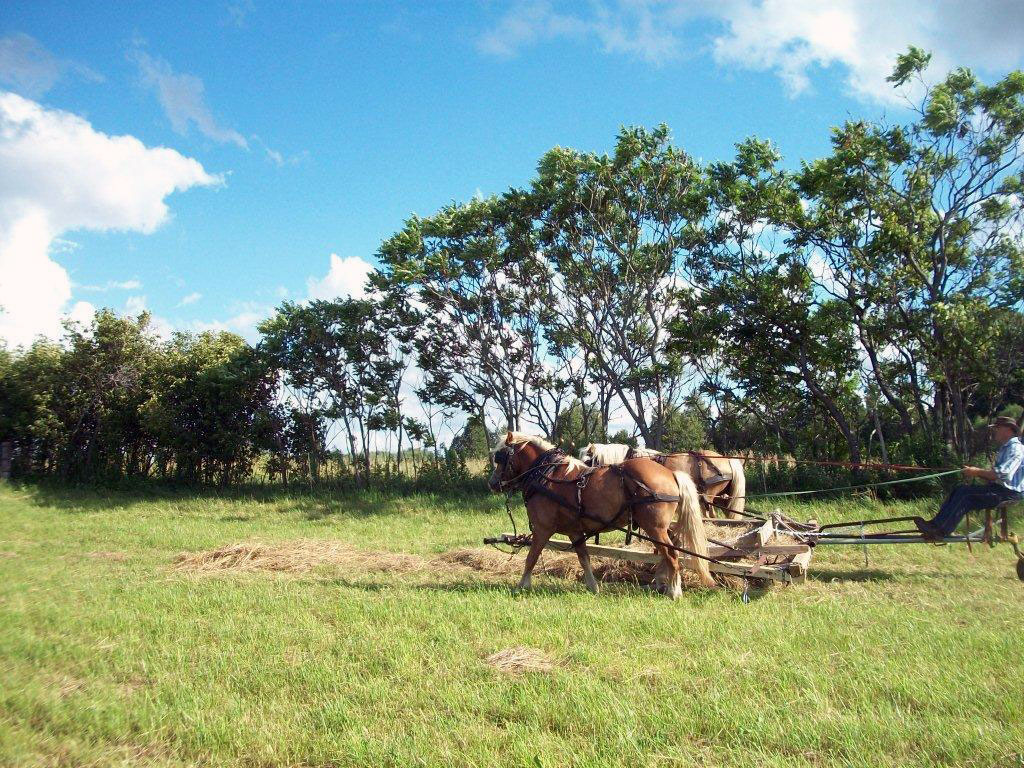 The rake teeth are made out of 2″x6″x8′ lumber. The poles and crossbar are 10 and 14 foot 4″x4″ posts. The pieces are bolted together with 3/8″ carriage bolts and flat washers. I used Schedule 40 pipe for the axle and the trailing frame. If you remember back a few years, I wrote an article called “One Horse Haying.” In it I described a one-horse buckrake built on a mobile home axle. I believe that it would work for a side hitch or a push style rake too. If you use a mobile home axle there will be a couple of extra wide spaces between the teeth to fit the tires. 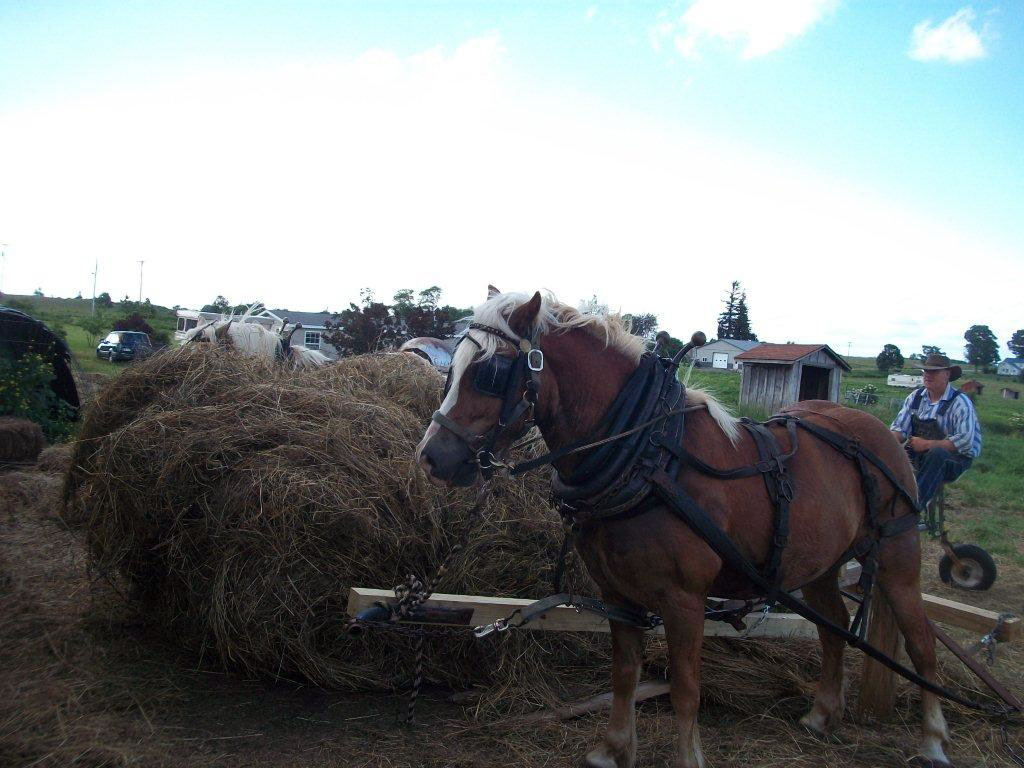 I built the basket first. The teeth are tapered 2×6’s. Cut a 1.5 inch wide wedge off the side of the board fading from the tip to the five foot mark. Do that on both sides of the tooth. Then cut a ski shape on the tip so that the tooth won’t dig into the ground when loading. I laid the axle and the teeth out so I could space around the wheels. The remaining teeth are 12 inches apart on center. It is best to mount the basket hanging beneath the axle. This will be important if your wheels are 24 or 30 inches tall. Lowering the rear mounting point reduces the angle of the teeth and lets the hay slide on better. The crossbar extends to the outside teeth to compensate for the “short” axle if a mobile home axle is used. The rear crossbar/pullbar extends 2 feet past each side of the basket. The single trees attach to the ends with short chains. They are wrapped around the 4″x4″, then cinched tight with 1/2″ ready rod. 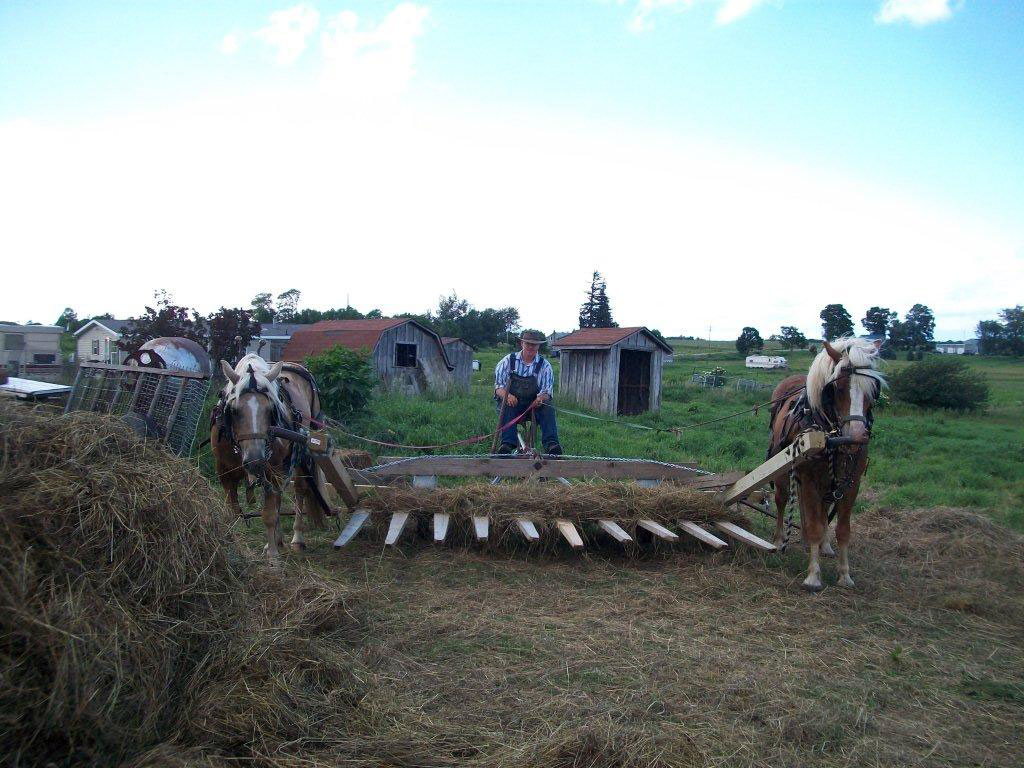 Unloaded and ready to go.

I drilled and bolted the basket to the axle and added the poles. I decided to make them straight, not angled outward like most of the pictures I had seen. The back end of the pole bolts under the rear crossbar and over the axle to give the needed upward slant. They are 10 feet long and have a bent pipe bolted on for a pullback point on the tip. I used short chain and long pole straps with an extension to lower the breast strap for backing. I added a 5 foot angle brace from the rear crossbar to the pole to stiffen the pole side to side. 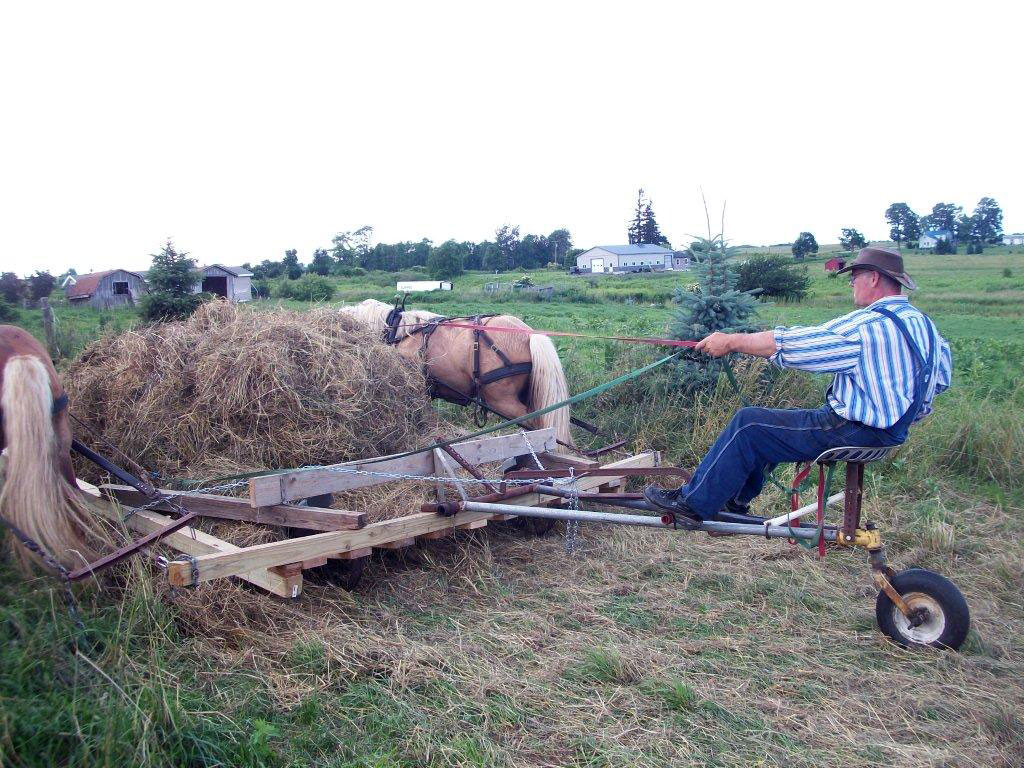 The trailing frame and lift took the most time. I think that I could have used the basket alone and let the teeth ride on the ground. That would have made the buckrake simpler. I have run it with the teeth down several times. It drags more when loaded, but the ponies manage fine. However, I built a triangular frame that is 7 feet long and 3 feet wide at the base. It pivots in two pipe tees bolted to the rear crossbar. As an alternative, I could have used 1″x1/4″ flat steel bent around the frame and bolted in place. I mounted the caster wheel and seat stem, then built a lift lever that locks over-center. I may tinker more and try converting it to a push style rake later. The lift is connected to a pipe tripod bolted to the crossbar and backboard. I added side chains to the lift because the basket flexed too much when loaded. I would recommend using a 6″x6″ especially if you opt for a wider rake. The chain is 1/4″ inch. 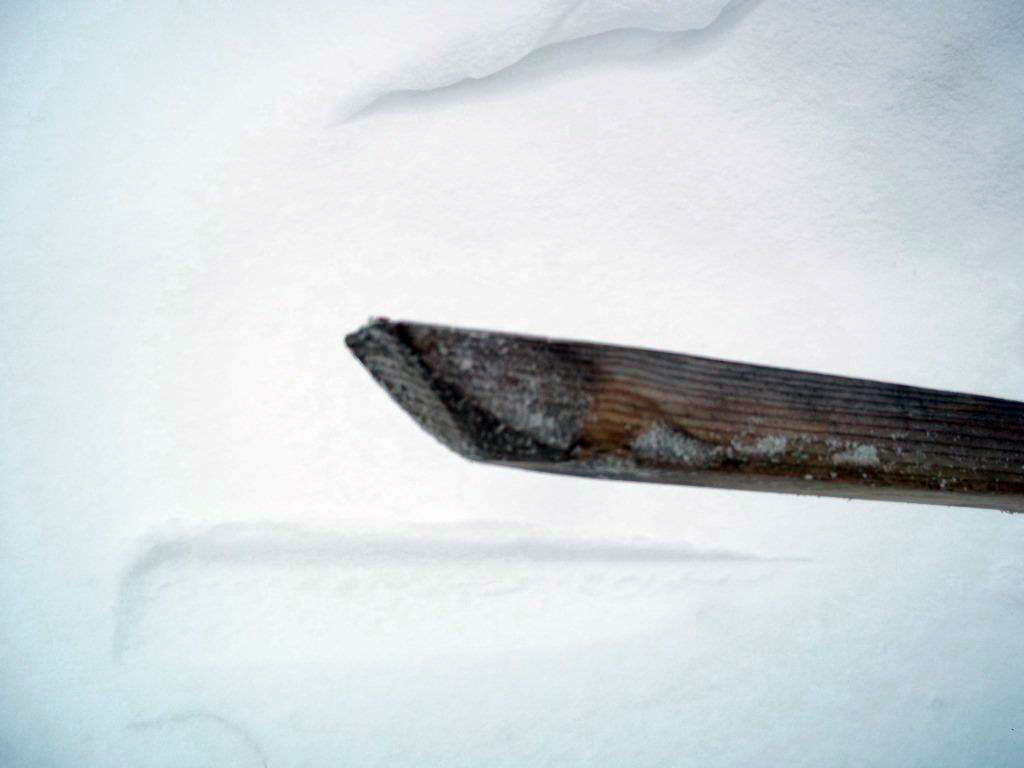 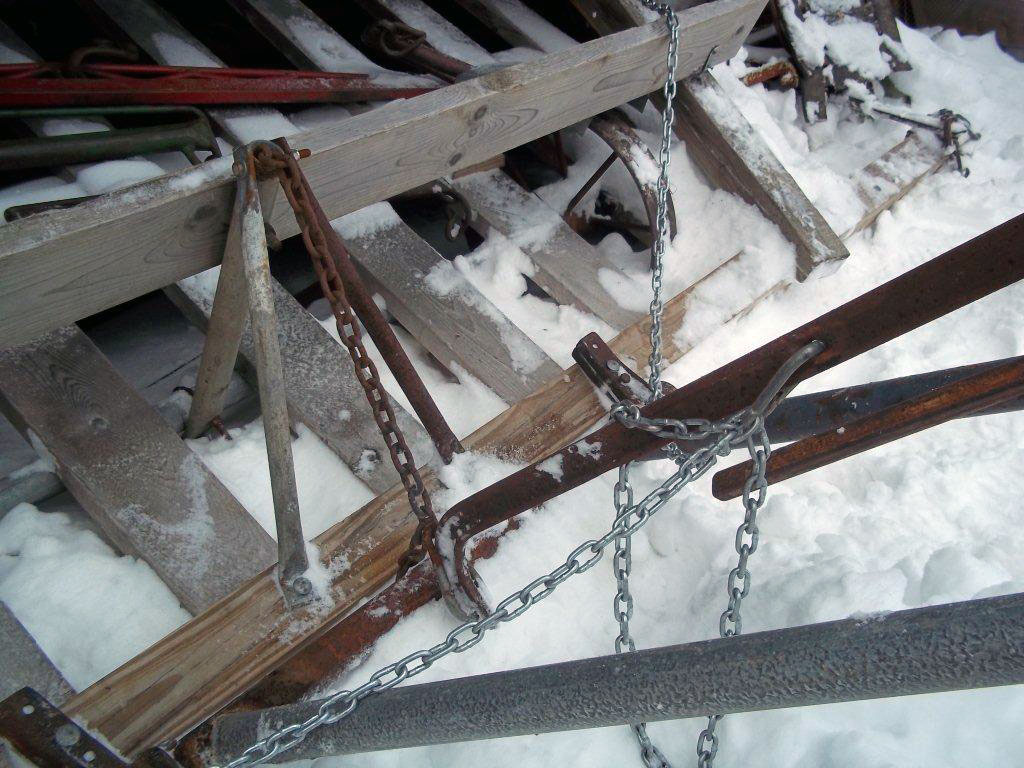 Another view of the lift pylon and trailing frame attachment. 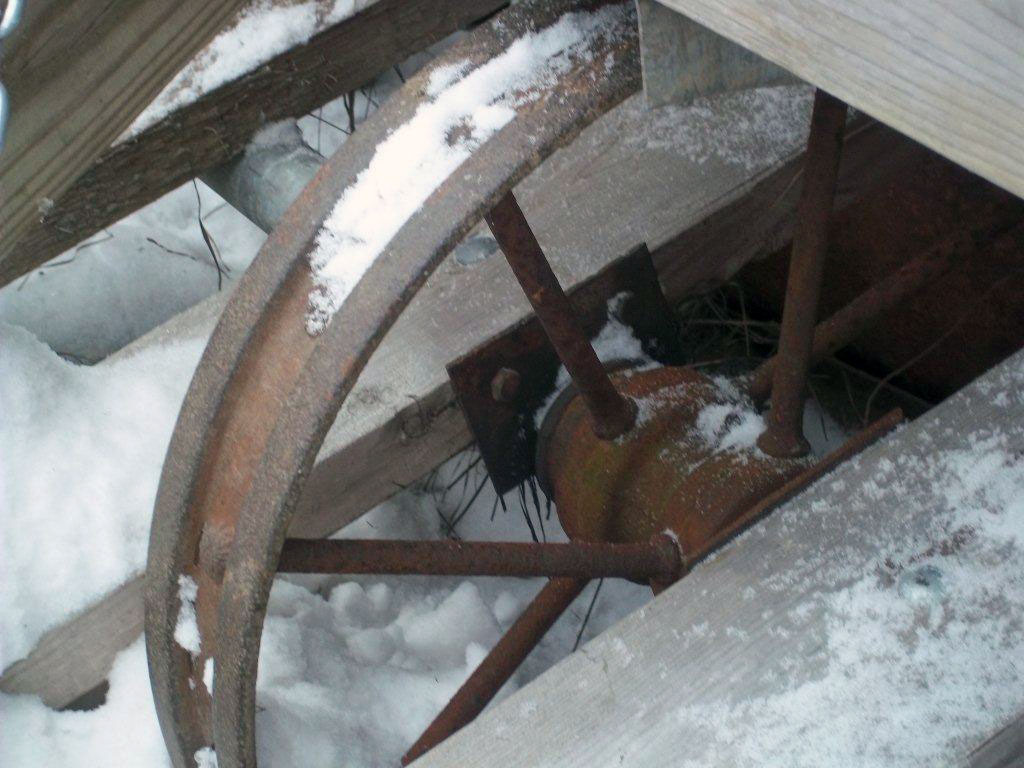 Wheel fitted between teeth and side wear plate. 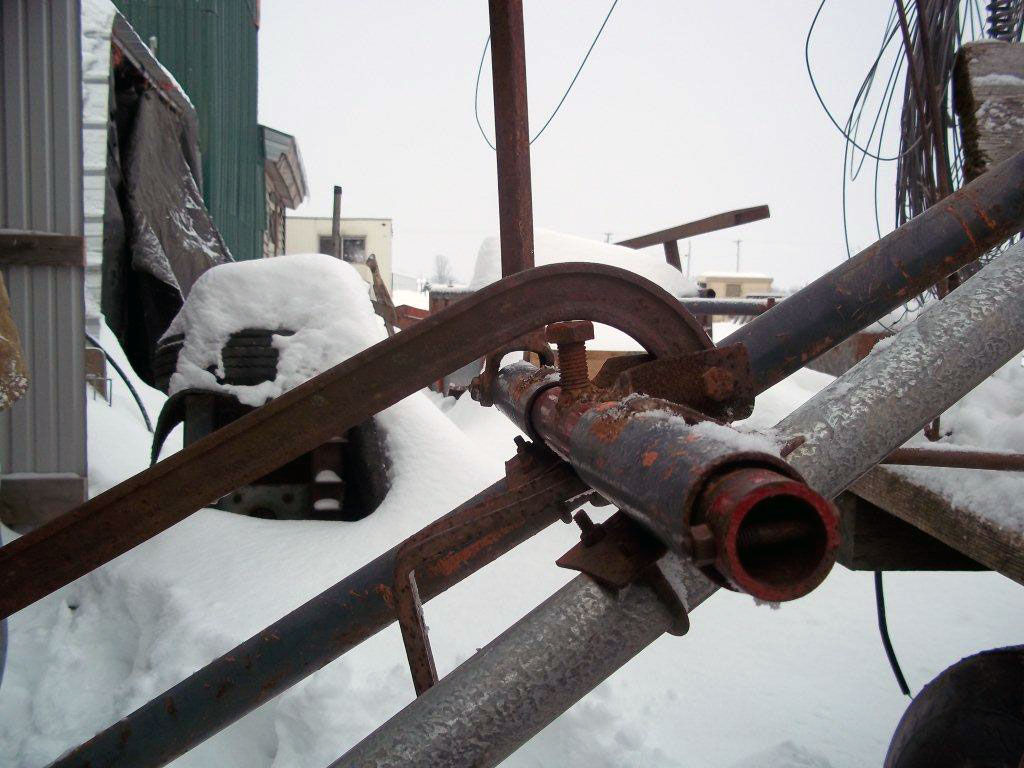 Over center lock in up position. 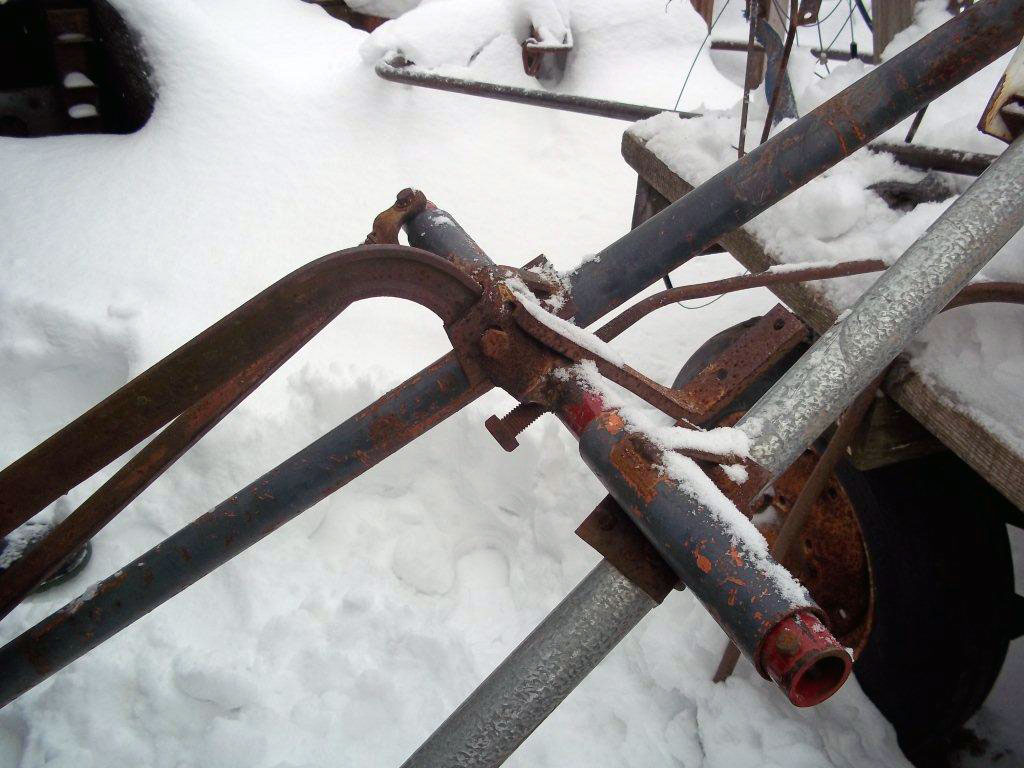 Over center lift-lock in down position. 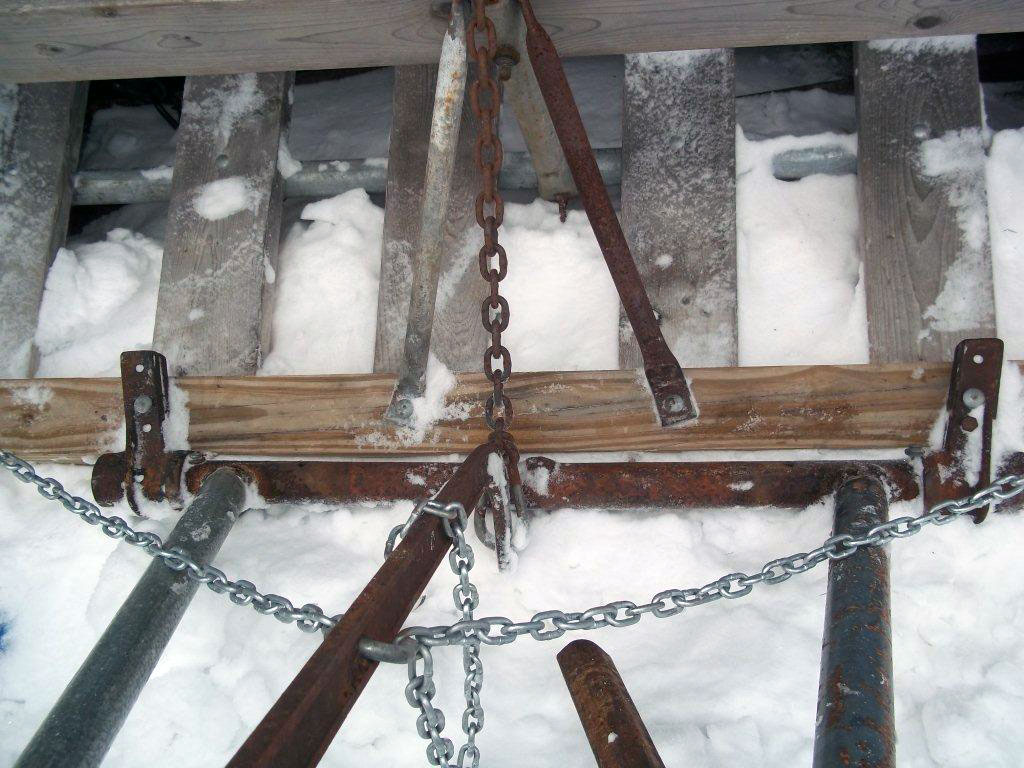 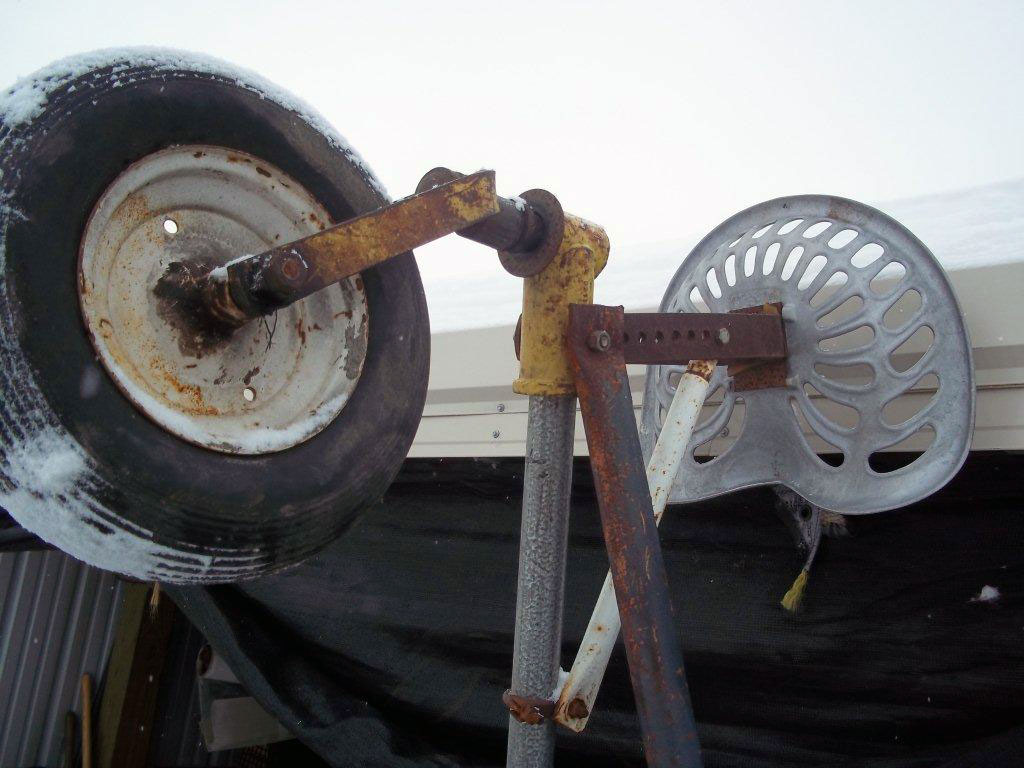 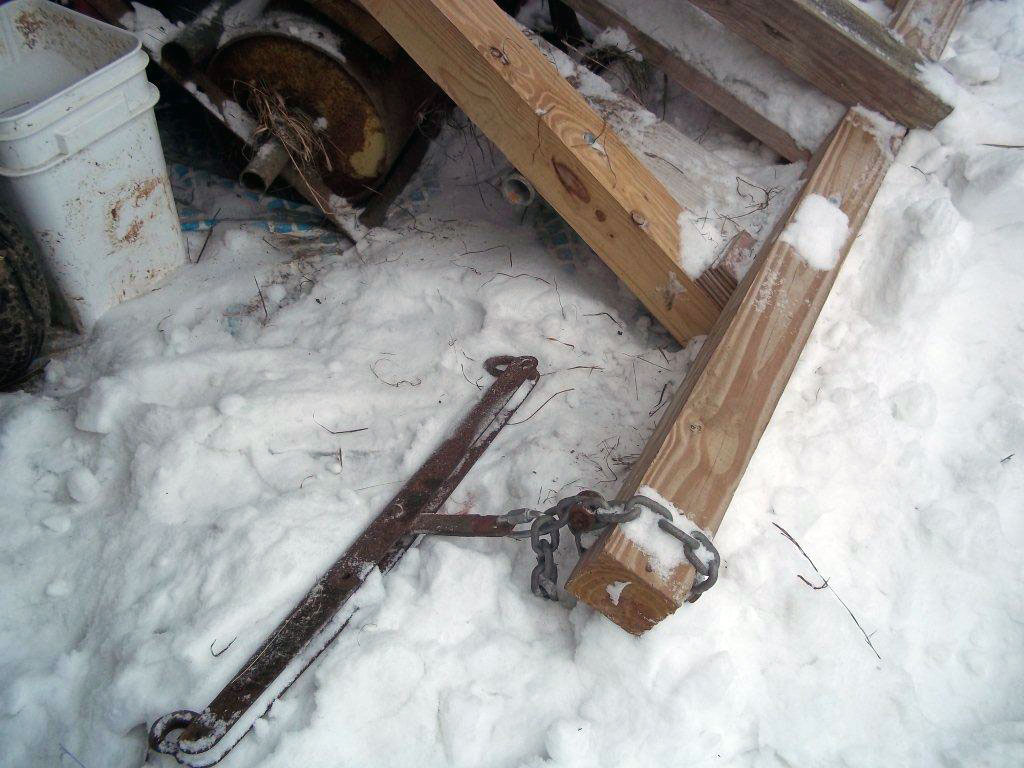 If I build another buckrake, I will change several things. The teeth will be 7 feet not 8. There won’t be a trailing frame. I will use a sliding seat or platform instead. The rear crossbar will be a 6″x6″. I will angle the poles and eliminate the pipe pullbacks. These changes could cut the build time in half. The rake will fit in the tight spaces by my haymow and be lighter weight. I encourage you to improvise.

If you want to see some vintage footage featuring a buckrake, visit www.archive.org/details/buckrake. This links to Vermont’s historical film preservation site.

Just don’t get trapped by the computer — there’s hay to make! 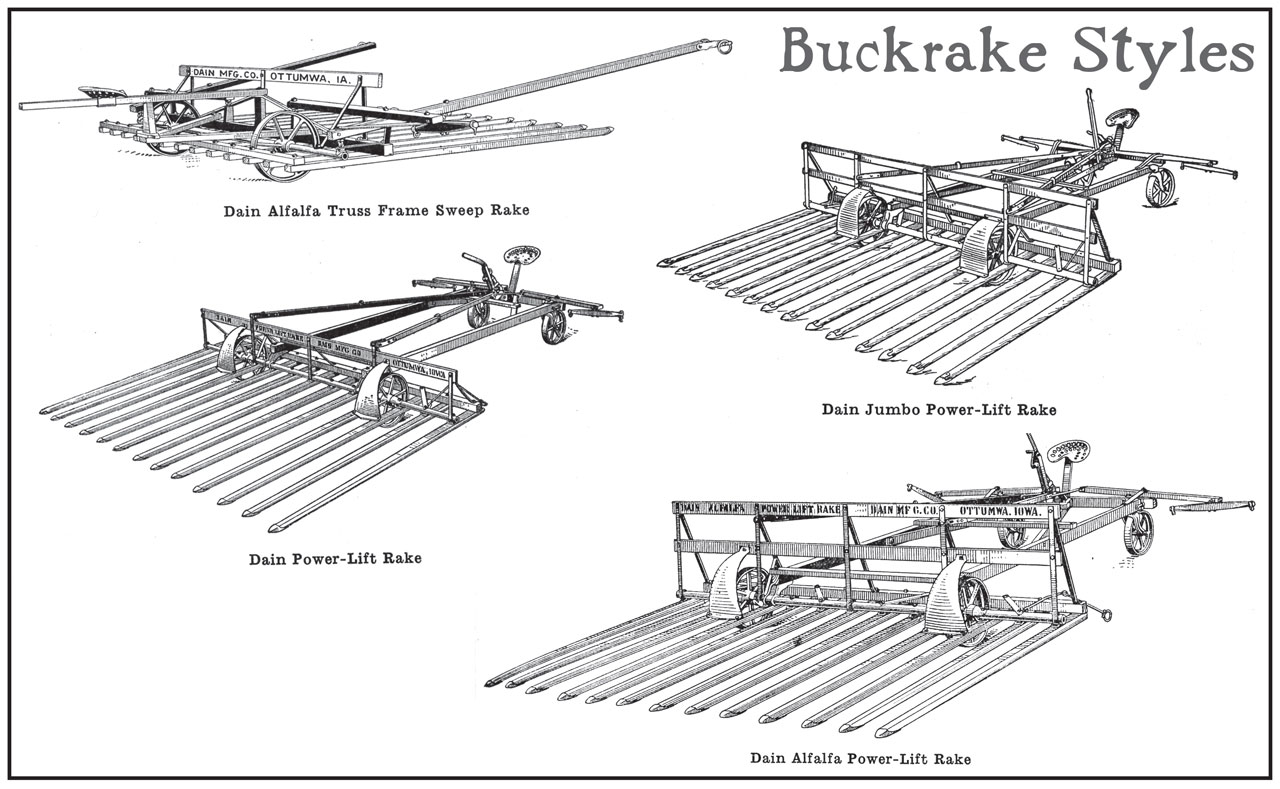 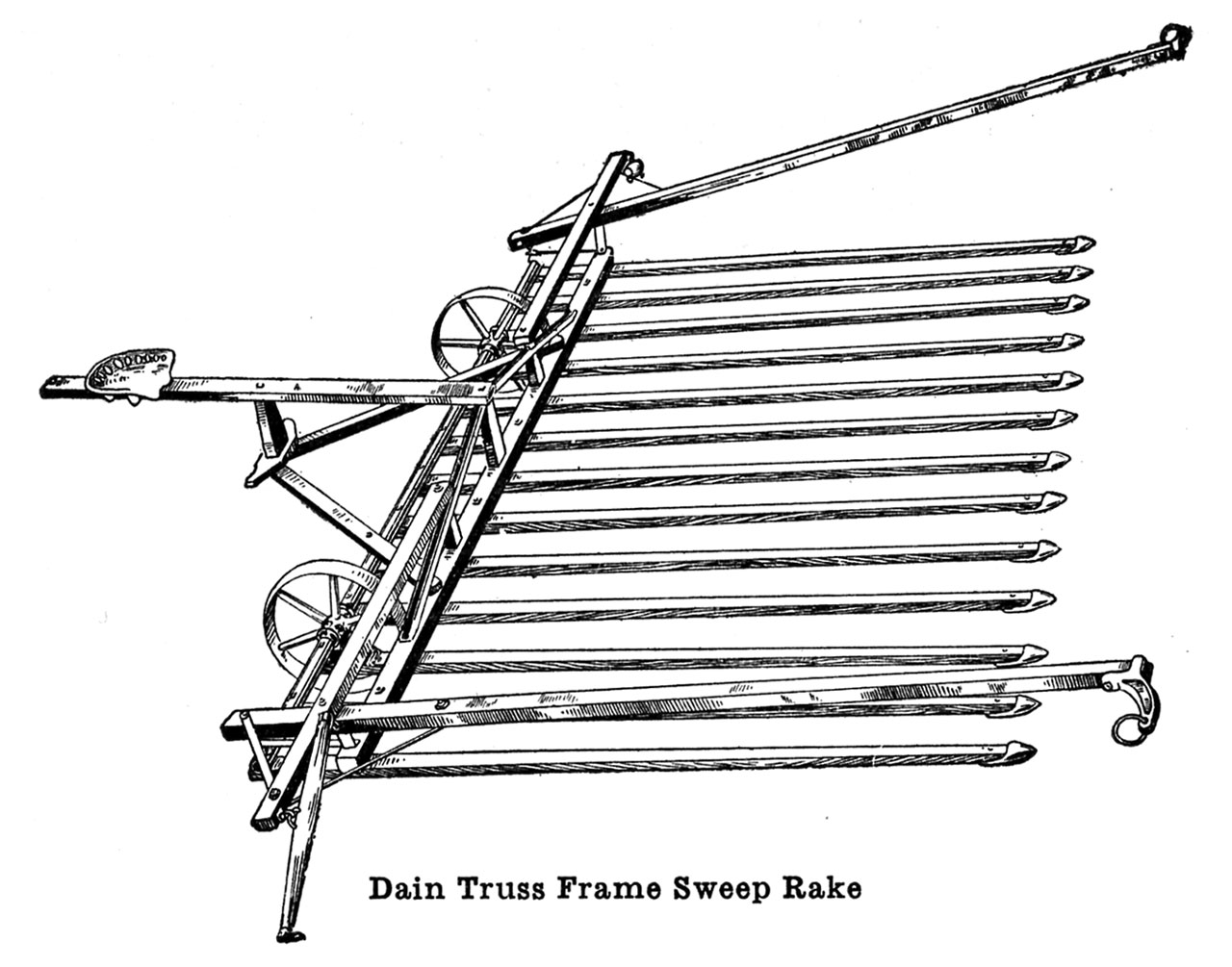