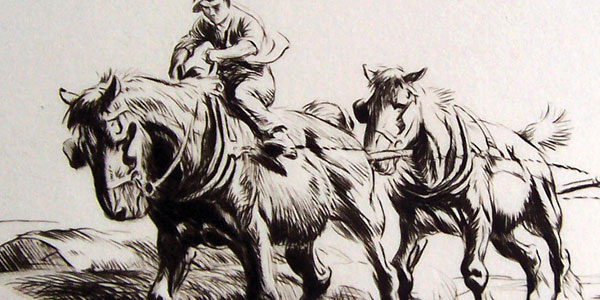 Legacy of the Soper Family

Legacy of the Soper Family

by Joy Baker of Suffolk, England

The Soper Collection was delighted to have been contacted by Small Farmer’s Journal for use of the photographic image of one of George Soper’s actual cut woodblocks – ‘Inside The Large Barn.’ When we received the quarterly issue before Christmas (Volume 43 Issue 2) there was the image on the front cover! We were further delighted with the Journal’s interest in an article on the Soper family’s beliefs in conservation.

The Soper story is extraordinary: awe-inspiring, filled with beauty, creativity, inspiration and awareness of the necessity for conservation. In this vital area they were years ahead of the general public’s understanding of the importance of keeping the right habitat to ensure the survival of wildlife.

George Soper and his two daughters, Eva and Eileen, with the support of their loving mother Ada, created an archive of enthralling material. Their output covers 100 years. George first exhibited at The Royal Academy in 1890. Eva and Eileen both died in 1990.

With a professional career as a black and white artist and then as a major illustrator of the English classic children’s books – Alice in Wonderland, The Water Babies and many more – George Soper also enabled his personal passion to play a part in his artistic output by his magnificent portrayals of the working horse. His artist eye was in thrall to the power, beauty and achievement of this powerful animal which, together with the industry of all those handling the working horse, achieved so much in the agricultural and industrial development of our country, applicable in other countries also.

Eva modelled birds for The Royal Worcester Porcelain Company. Her figurines were in production for 49 years, giving pleasure to countless collectors.

Eileen was one of the youngest ever exhibitors at The Royal Academy with her spirited engravings of children in their varying activities and pastimes. At an exhibition in Chicago, Wallace L De Wolf, Chairman of the Print Committee of the Chicago Art Institute, was so captivated by the quality and spirit of Eileen’s work that by 1929 he had presented 70 of her engravings to the Institute. In England, whilst also exhibiting for 27 other authors, Eileen became the major illustrator for Enid Blyton, including The Famous Five series and the nature plates accompanying the Blyton Nature Readers which were used in schools for many years.

However, as with her father, there was her own all-consuming passion for the gardens of their Hertfordshire home, Wildings. Hours and hours of her time were spent painting and recording the resident elusive badger, deer and small fry, developing with them an extraordinary rapport. Eileen wrote and illustrated three remarkable books describing the feather, flora and fauna thriving in the seclusion of their garden.

“Wild, tangled areas are a nightmare to any gardener, but without them one cannot hope to have the less common birds. My late father, who made this garden, and whose interest in horticulture was great, disliked the formal garden, and his ardent love of birds and the natural form of gardening were in harmony.

There are gardeners who fail to appreciate the value of birds. These people are glad to let the birds do the work of keeping the fruit trees free from pests, yet when the fruit is ripening will use a gun against them, declaring war on all species.

Having inherited a garden and bird sanctuary I know that the two can be combined, to mutual advantage. I am convinced that the good that most birds do, outweighs any harm.

Occasionally sparrows and a few other birds will attack the blossom of crocuses and primroses, but it happens here only once in a while. Bullfinches sometimes take the flower buds of certain shrubs, notably Pyrus Malus floribunda, and Forsythia suspensa. In the latter case we compensate by growing the variety intermedia spectabilis which, for some reason, the birds never touch.

Birds will, of course, take their natural food, and if we tempt them by growing unnetted fruit, we must expect them to take their share. We should have a poor chance of getting any fruit if the birds were not helping to keep the bushes free from caterpillars and aphids during the rest of the year.

If a garden has already been established on formal lines, it is not easy to acquire, without drastic alterations, the environment necessary to its success as a bird sanctuary. My father began with an open field: an artists’s ability to visualise natural beauty, and a horticulturist’s knowledge of plant life. As a lover of nature, he often preferred the wild plants to the hybrid, and he introduced many species of shrubs, and climbers where they could scramble at will over the trees that grew up with them. Some of the trees have since been regretted from a gardener’s point of view, notably a group of silver birches near the house. It is almost impossible to grow anything underneath them. They should be cut down, but they are too beautiful, and they are never without their bird population. Tits, warblers, and finches are among the many which frequent the branches, and the top of the highest tree is a favoured perch of the turtle dove. I cannot visualise the garden without these perches.”
(Wild Encounters, Chapter 1, page 16)

“The long-tailed tit probably builds the most beautiful nest of any British bird…. We have had nests in various shrubs in the garden. The most attractive site was the New Zealand shrub Corokia cotoneaster, where the grey green colouration of the twisted stems and tiny, evergreen leaves is well suited to the lichen-covered nest.”
(Wild Encounters, Chapter 2, page 27)

“Long-tailed tits. These dainty little birds are very beautiful, and I was never able to see them at such close range before. In my first attempt to feed them I rested my hand on a birds’ feeding tray outside the window, and, to my surprise, the three that were then coming to the feeders flew at once on to the tray, and gathered round to take the grated cheese I held. I felt this was almost unbelievable…”
(Wanderers of the Field, Chapter 9, Page 110)

Photographic images courtesy of The Chris Beetles Gallery Ltd (www.chrisbeetles.com) on behalf of the AGBI. Wild Encounters and Wanderers of the Field published by Routledge & Kegan Paul Ltd ©1957 and ©1959 respectively. Wild Favours published by Hodder & Stoughton ©1963.