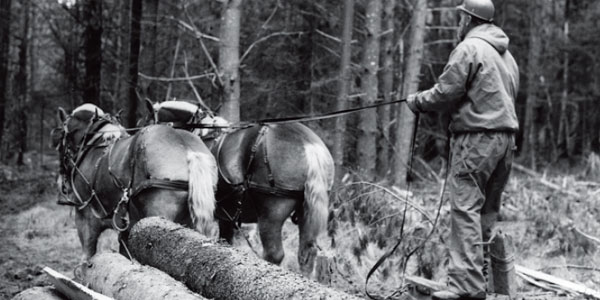 by Nan Brucker of Albion, Maine
photos by Barrie Brusila

The woods are full of horses. A team of Suffolks pulls up to the landing with a load of logs, as a team of Percherons leaves with an empty scoot. Soft bells announce the arrival of a single Belgian, twitching out another log to be bucked into 8-foot lengths and forwarded to the pulp yard. In moments when the chainsaws fall silent, leaving only the sound of bells and hooves and the calls of the teamsters, this could be a forest scene from a hundred years ago.

It’s not; it’s the annual Low-Impact Forestry Workshop in Unity, Maine. Held each year for five years now, it’s organized by a group of dedicated, experienced teamsters, and sponsored by the Maine Organic Farmers and Gardeners Association at the MOFGA fairgrounds, which includes a woodlot.

Attendees range from novice teamsters who want to learn to work their horses in the woods to folks who’ve never held a pair of lines before but are about to get the chance. Over the next two days, we’ll work with experienced teamsters who will give us help with our technique, our gear and our relationships with our horses.

By the time we show up early one November Friday morning, the old hands have already been in the woods for two days, in some tough conditions. Previous years have seen snow, but this year the ground is clear and it’s windy and cold.

Before the workshop starts, the production crew has gone in with forester Barrie Brusila to mark trees, construct brows and trails, set up a portable saw mill and begin felling. We’ll be harvesting sawlogs and pulpwood, removing low-quality trees to improve the long-term health of the stand, and using horses to disturb the soil as little as possible. The sawlogs will be cut on site to provide lumber for a new livestock barn for MOFGA’s Common Ground fairgrounds. The pulpwood brings cash to buy what can’t be produced on site.

About 30 of us gather for breakfast and introductions in the exhibit hall. A MOFGA event always features plenty of good locally grown organic food and, like the lumber camps of old, this workshop will be fueled by the efforts of a talented team of hardworking cooks.

The plan here is to have participants meet the old hands, review harnessing and equipment, try driving a single or a team out in the field, then move to the woodlot when ready. Along the way, there’ll be discussions of basic driving skills and safety, how to build a woods scoot (a kind of sled), twitching with a single horse, driving a team with a scoot, how to use a horse-drawn logging arch, and how to lay out woods roads.

Soon, there are more than a dozen horses in the woods, in teams and singles. Teamster Brad Johnson starts single twitching logs with the Belgian mare Sal that he and Mark Albee brought, and soon has a gaggle of followers, learning to set chains and taking turns driving. Teamster Pete Stratton has Percheron mares Misty and Princess pulling a scoot, and Donny Webb alternates his Percheron geldings Pete and Bob and his Belgian mares Molly and Pearl on a scoot. Neal McNaughten has Nick and Belle twitching single, so more newcomers get to try their hands.

Adam Henry’s Percheron mare Maggie twitches wood out so quickly she’ll keep several other teamsters busy forwarding logs down to a brow for the scoots. Jon Ellsworth works his Suffolk team, and Don Nickerson, with another team, both scoots logs and offers plans and advice on scoot building, often at the same time. Long-time horseman Paul Birdsall hasn’t brought a team this day, but has plenty of knowledge to contribute.

Meanwhile, Peter Haggerty, who puts in a lot of hours organizing this thing every year, is moving from group to group, matching people with questions to teamsters with answers, making sure everyone gets what they came for.

Steady and deliberate, horses and teamsters move the wood from where it’s been felled out to trails, then to brows and onto scoots. From there it goes to the mill or to the pulp yard. The theme here is “from stump to stick.” This year a Wood-Mizer portable sawmill has been set up right in the woodlot by Vermont sawyer Nick Zanstra and horses get used to pulling logs up next to the buzzing mill and standing quiet while the logs are unloaded. Other teams pull 8-foot lengths out of the woodlot to the pulp yard.

Safety is a constant issue because the wind is strong and cutters keep busy bringing down any dead trees. The old hands watch the treetops, ready to call everybody out if the wind gets too strong, and every cutter carries a first-aid kit. Horses new to the woodlot get used to the sound of chainsaws and the commotion of falling trees. Beginning teamsters get used to driving horses while keeping their own feet out from under logs and scoots, not tripping over tree roots and not driving right under a felling operation.

At the landings, pulp hooks, peaveys and picaroons fly to get the wood on and off the scoots, while teamsters swap opinions on what equipment they like best and why. One fellow offers up a new pulp hook for use because he’s got a logging job coming up and doesn’t want to show up with too-shiny equipment.

Mid-morning, a pickup truck horn sounds and it’s tea break. The tailgate of this modern-day chuckwagon goes down and the cooks dish out muffins, biscuits, cookies, bread & butter, apples, cheese, tea, cider, coffee and anything else they can think of to keep the crews thawed out and stoked up. Some of the apples find their way to the 4- footed members of the crew.

More work until mid-day dinner and a break for the horses, then back to the woodlot, although the wind is blowing whitecaps in the horses’ water buckets. By 3:30 the cold is getting to everyone and the horses are testing the new teamsters about whether it’s time to head back to the barn. It’s what they call a teachable moment and a discussion ensues about how to encourage a horse that’s flagging or judge when a horse has truly had enough for the day. Another teachable moment occurs as a team jackknifes its scoot and has to be untangled and sorted out.

The workday ends, horses are fed and watered and then God’s frozen people head across the darkened fairgrounds toward the lights of the exhibit hall and a hot supper. The meal features a much-honored pig that was raised as part of MOFGA’s homestead project and then gave its all for the good of the cause. After supper, Maine forester Mitch Lansky leads a discussion about the principles he’s covered in his new book, “Low Impact Forestry: Forestry as if the Future Mattered.” Then out come the fiddles, mandolins and guitars to finish out the evening.

Next morning, the ham makes a welcome reappearance accompanied by eggs, plenty of baked goods and a discussion of larger hitches. Even though this is a forestry workshop, talk goes back and forth about the uses of different hitching systems for plowing and other field work. The old hands trade views about their personal preferences – using a jockey stick in the field vs. in the woods, etc. – and newcomers interject with questions, so the discussion works on both levels.

“Just tie that back and you’re on your way,” says one teamster as he draws a rough sketch of a 4-up hitch. “Put your steppiest horses in the middle” on a bigger hitch, advises another. Another shows a hitch refinement that “prevents things from getting in a snarl.” Discussions like this have occurred over every meal.

Out in the woodlot, the morning’s focus is on cleanup – getting the rest of the wood out to the pulp yard or over to the sawmill. After lunch and a round of applause for the cooks – whom we esteem by now even more than that pig – we try the 3-up and 4-up hitches, testing horses who’ve not been hitched together before. The scoots are loaded high with pulp wood, the “steppiest” horses do indeed go in the middle, and after a few false starts they go off fine.

As the light fails, the last logs are twitched out and the scoots make their final trips to the pulp yard. Horses are loaded for the trip home, phone numbers are exchanged along with promises to keep in touch. Offers to loan equipment are made and accepted. A team of horses gets sold.

Three thousand board feet of lumber were milled for the livestock barn and a lot of pulp readied for the mill. It was an occasion for learning, but also for socializing, for strengthening community, and for reaffirming the choices people have made about the lives they’re living and the way the work gets done.