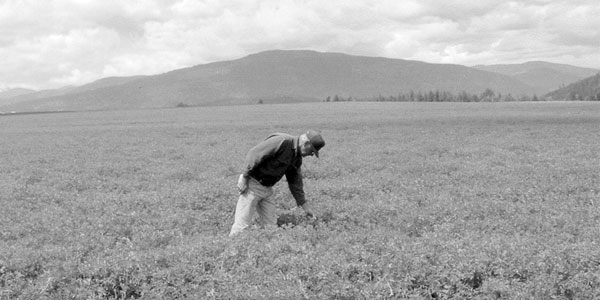 by Jamie Henneman of Tonasket, WA

Change really can be a good thing, according to one Eastern Washington rancher, especially when change allows a ranching operation to expand and be more profitable. By making a few basic alterations to his cattle management, Colville area rancher Ron Rose is getting better use of his pasture ground, making more of his water resources, and now has the option of doubling his herd size.

By employing some low-impact management tools, Rose has been able to make a 160-acre spread jump from supporting 35 cow-calf pairs to 100 pairs through the use of an off-site watering system and special feeding methods. Lush green pasture grasses are also prevalent on the ranch due to mindful management of how to evenly spread cattle traffic and their manure byproduct.

All this has been done at the Rose “Big Sircle-Little Ranch” through his unique leave-no-trace style of ranching that is yielding both benefits to his operation and the environment. 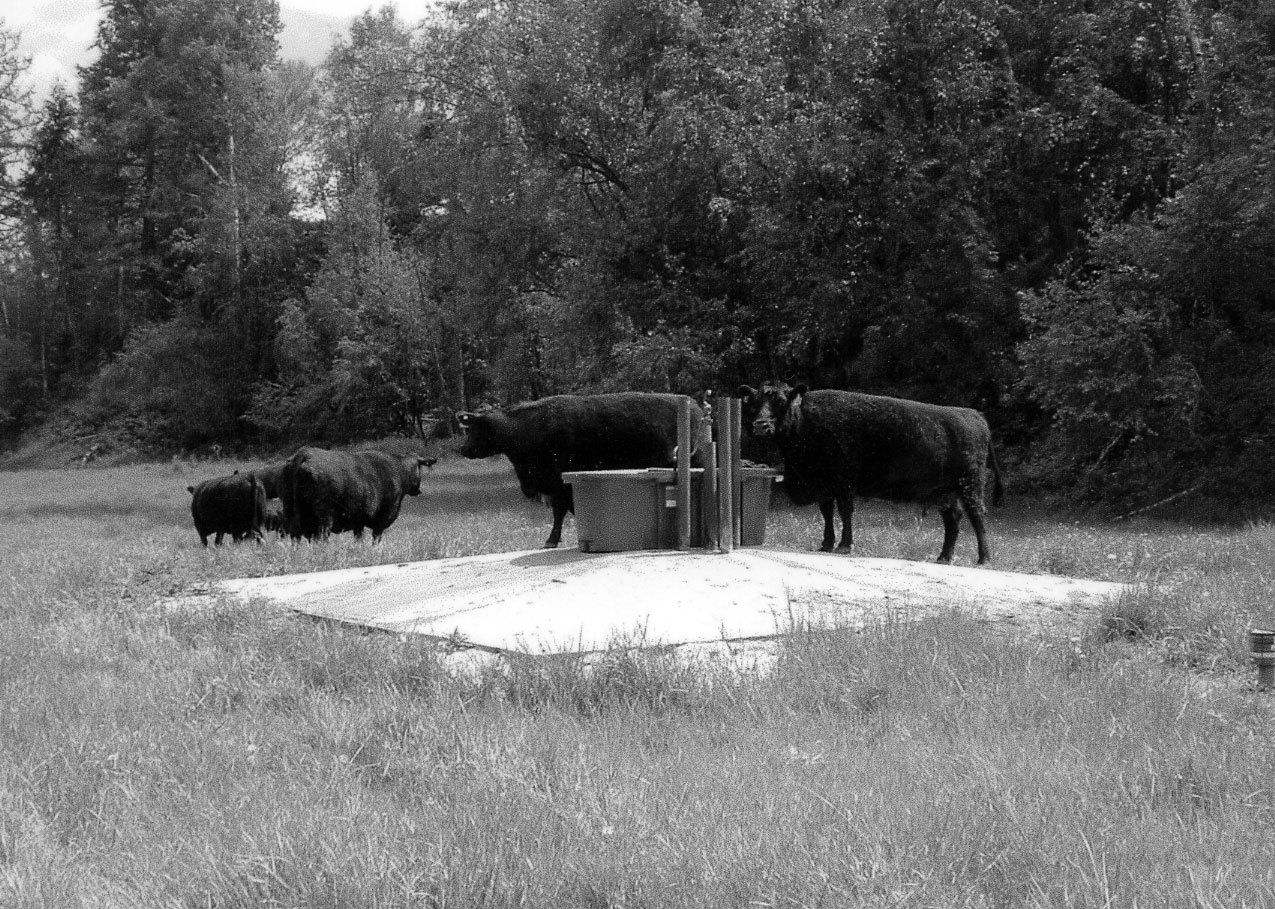 One of Rose’s most recent projects has been an innovative off-site watering system that allows his cattle better access to water and encourages broader cattle traffic over his land. The 160-acre pasture that borders the Colville River in Stevens County would seem an ideal location for cattle, due to its close proximity to a water source. But instead of going the traditional route and having his cattle water at the river, Rose has installed several 150 gallon watering troughs throughout the grazing ground. A 430-foot well pumps the water to the tanks at 100-gallons-a-minute and water levels are maintained through use of an in-trough float. These troughs are positioned on a six-foot long cement slab that helps prevent one of the common problems associated with off-site watering – boggy ground. “Putting in these tanks has not only increased the availability of water for the cattle, but it has also allowed me to get better grazing dispersal over my fields,” Rose explained. “Instead of the cattle hanging around the water tank, they come and get a drink and then move on.”

The water trough area that is inhospitable for lounging encourages the cattle to find other places to rest.

“My cows are now choosing a variety of spots to lay down when it is hot out and I’m not seeing as much traffic at the river,” Rose related.

Rose said he has not fenced off from the river at this point, as the cattle are benefiting the water body in a number of ways, namely by keeping riverbank grasses trimmed down and healthy to help prevent the encroachment of weeds.

“Now that the cows don’t have to come to the river just to water, they are making a little bit better use of the grass by grazing it off,” he said. “Grazing is one of the best uses for this piece of land.”

Another management tool that has allowed Rose to make better use of his grazing ground is the installation of cross fences that has created a six-pasture rotation system. The pasture rotation helps to ensure that cattle are evenly covering the grazing acreage, instead of just hanging out near their favorite spots.

But a state-of-the-art watering system and fencing alternations are not the only methods Rose uses to make the most of what he has. 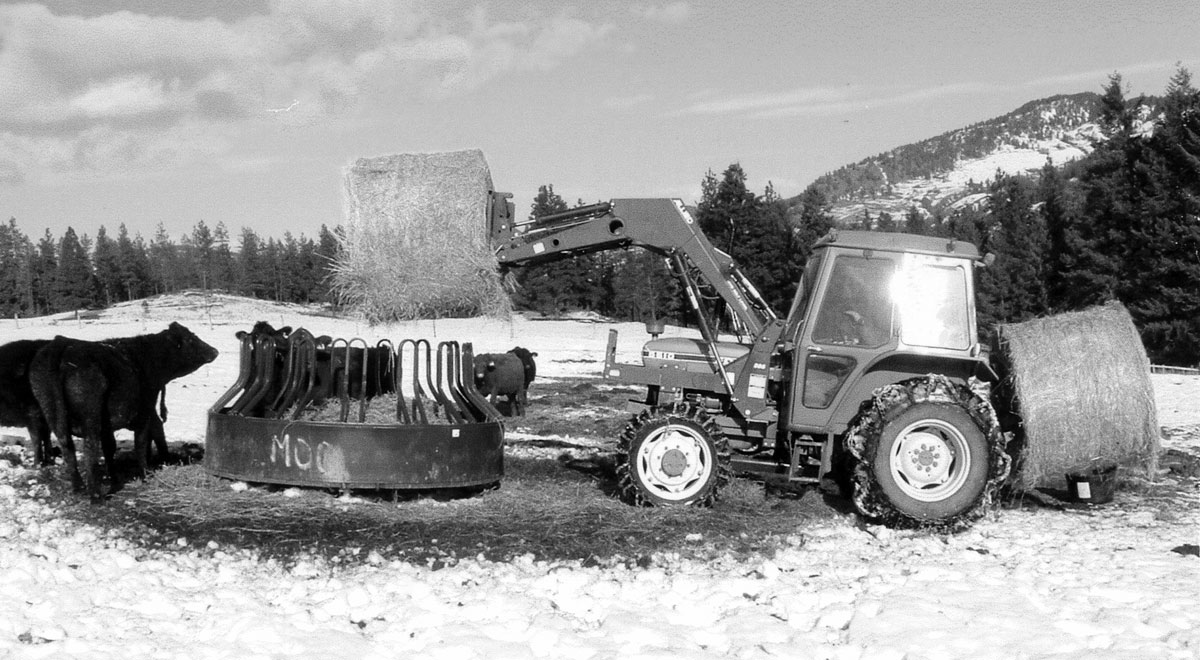 Instead of providing mineral salt to the cattle by way of tubs or other on-the-ground methods, Rose has bored out a 50-gallon drum that he suspends from a tree to allow the cattle to be salted off the ground. This ensures that Rose doesn’t lose any other loose minerals he has invested in through moisture or spillage and there isn’t a patch of grass that is brown and dead from being covered by a tub or barrel. Off-the-ground salting is similar to a feeding method that Rose uses in the winter to make sure he doesn’t lose any hay when feeding.

When the snow has buried the grasses in Eastern Washington, Rose feeds his cattle every other day in round bale feeders that he moves throughout his pasture every time he feeds. The 800 pound round bales can sustain 14 cows for two days, according to Rose, a figure that increased by two head since he started feeding this way.

“Before I was losing a lot of hay by feeding on the ground because it would get trampled,” Rose explained. “Now I don’t lose any hay and I can feed two more animals.”

Moving the feeders also allows hoof traffic and manure to be evenly spread throughout the pasture he counts on for summer grazing grasses.

An unexpected benefit from the mobile feeders has been that the cattle manure, high in acidity, has helped to discourage the prevalence of a common weed called Jim Hill Mustard.

“This spring there was a noticeable difference in the prevalence of the weed from where we had moved the feeders and where we didn’t” Rose related. “It’s just amazing the difference something that small can make.”

Taking advantage of the “free fertilizer” his cattle produce is not only good in the field, but also in the paddock. One of the main corrals by the ranch house that had been used to winter cattle was planted with triticale (a wheat-rye cross) this spring, turning what could be a dry, dusty corral into a mini pasture, ready for harvesting.

“I planted the triticale as a kind of experiment, both for the aesthetics and to get some good use out of that piece of ground,” Rose explained.

This kind of low-impact management has yielded visible results for Rose who can display flourishing pasture grasses, healthy cattle, and firm banks in his riverside pasture. “I am just a detail oriented person and one of those farm boys who always likes to have a project,” Rose said. “I am trying to get the most out of my land and efforts and I really enjoy seeing the positive outcomes of a finished project.”