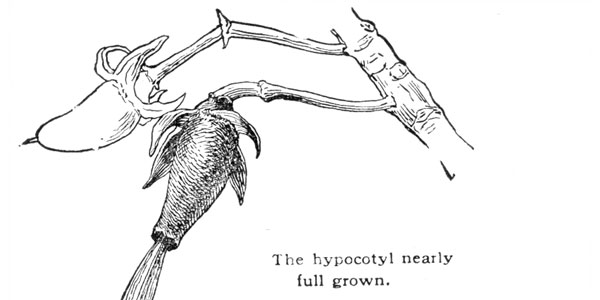 MANGROVE (probably an altered Malayan name) is a name applied to species of Rhizophora (Greek, root-bearing). The Rhizophoras are perhaps 5 or 6 in number, and are widely distributed on tropical shores. The genus gives name to the family Rhizophoraceae, which Bentham & Hooker place in close relation to the Combretaceae and Myrtaceae. The common Mangrove, R. Mangle, Linn., is one of the commonest plants in the swampy shores of tropical and subtropical seas. It is not in cultivation, but its strange methods of propagation make it one of the most interesting of plants. The following account is reprinted from Bailey’s “Lessons with Plants:”

The Mangrove grows on the low shores of tropical lands. It extends as far north as the twenty-ninth parallel in Florida, and occurs at the mouth of the Mississippi and on the coast of Texas. It is a spreading bush, reaching a height of 15 to 25 feet upon the shores, but becoming a tall tree in various places. It is an important agent in the extension of land into the sea. The means by which this result is accomplished are two. The fruit is small and capsule-like, but does not fall from the tree at maturity. A fruit is shown natural size. The seed is germinating, sending its caulicle out through the apex of the fruit. In the subsequent illustration the germination is further progressed. In the next illustration germination is nearly completed. The seed has endosperm. The cotyledons do not unfold in germination, but a woody tube grows from them and projects from the fruit to the point a. Inside this tube is the plumule. The hypocotyl continues to elongate, becoming thick and heavy at its lower end. When 6 inches or a foot long, it breaks away from the joint a, carrying the liberated plumule with it, and strikes root-end down in the mud. Roots push out from the lower end, and the epicotyl rapidly elongates and rears itself above the water.

A piece of a Mangrove branch is shown natural size. An aërial root is pushing through the thick bark. The root makes a strong curve when it strikes off the branch and then grows directly downward towards the water. The branch from which it springs may be only a few inches above the water, or it may be 10 feet; but the root pushes on until it inserts itself in the mud, and there makes a root system of its own. These long, lithe, descending roots, swaying in the wind, are characteristic features of the Mangrove swamp. Usually the hanging roots are unbranched, but now and then the tip breaks up into short branches before it reaches the water. These long roots remain attached at the upper end, and become trunks. The Mangrove plantation, therefore, becomes an interwoven mass, and thus marches on into the tidal rivers and the ocean, catching the flotsam and jetsam of the sea; and thereby it builds land and extends the shores. In the quiet recesses of the Mangrove swamp aquatic and amphibious life finds refuge. The shell-fish cling to the trunks and at low tide they are exposed, thus giving rise to the stories of the early explorers that oysters grow on trees. All this will recall the accounts of the banyan tree, and there are wild fig trees (the banyan is a fig) in Florida and southward which behave in a similar way. It seems strange that roots should strike out into the air, but the reader may have observed the”brace roots” near the ground on Indian corn; and many plants, as the ivy and trumpet-creeper, climb by means of roots.