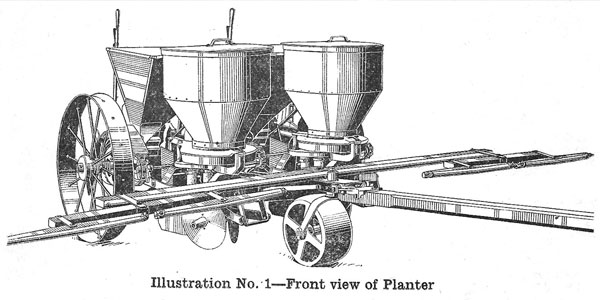 Oil the machine frequently, particularly during the first two days with a new machine. As a general rule the frequent use of small quantities of oil gives better results than large quantities used at longer intervals. Be sure that the oil holes are free from paint and dirt and see that the oil gets down into the bearings.

Unless otherwise specified the planter is regularly shipped with a double sprocket, having 13 and 15 teeth, which is reversible. The number of teeth in the sprocket indicates the planting spacing in inches. Nine-inch, eleven-inch, seventeen-inch and twenty-inch spacing sprockets may also be supplied on request.

Before starting the machine see that pickers are not bent and that the hinge piece or tongue works freely up and down between the points.

After having worked the machine and previous to starting it again, see that the pickers move freely and are free from starch and dirt from the potatoes. When turning corners, raise the furrow openers by means of the raising levers, which also raises the covering disks. The marker should be raised when not in operation to prevent danger of breaking.

Be sure to keep the hoppers free from stones and dirt, also keep the reins from being caught by the pickers. The weight on the hoppers and also the slide may be adjusted to regulate the flow of potatoes.