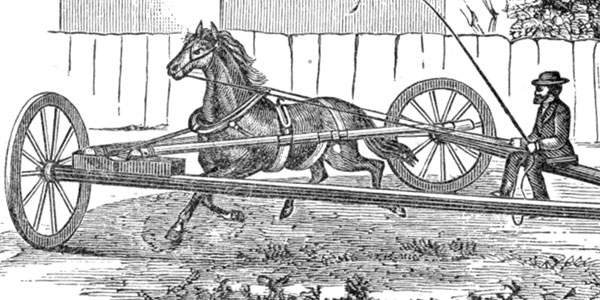 More Magner and Me

More Magner and Me

A couple of years ago I broke the harness horseman’s first rule of common sense. It was incredibly stupid and impetuous of me but I did it anyway. I hooked two young half broke fillies together before they were really ready. As a result I almost got my wife Andrea and me killed, destroyed a wagon and ended up with two spoiled runaway horses. If I’d addressed the problem immediately, as I would have in the old days, I’m sure I could have corrected and reassured the horses fairly quickly but I didn’t. I let considerable time go by; I had lost my nerve; post-traumatic stress syndrome had me in its clutches. A little while after the disastrous event, knowing what needed to be done, I hooked each of the fillies, independently, beside the old Clydesdale mare I had started them with again, but on both occasions I simply left them tied to the hitching rail. I couldn’t find the courage to pick up the reins and put myself in harm’s way again. I was an emotional wreck.

That’s when I decided to consult my old friend Mr. Magner. I dragged the old book off the shelf and found a page I had remembered noting on one of my many excursions into the volume. Essentially the old horse whisperer was outlining a coward’s way of dealing with difficult runaway horses and in my timid state of mind I found it appealing. I have included his illustration and explanation. I will let him speak directly to you on the process and limit myself to an explanation of what happened when I put his plan into action.

As you can see the construction of the device is somewhat involved; made more so by the fact that I did not have the required round pen in which to contain it. It would take weeks in our woods felling trees for material and further days constructing a suitable enclosure but that would buy me time before I actually had to man up and deal with the horses. Then there was the matter of the device itself. In the drawing it seemed a little flimsy to me. Since my Brabants, growing every day, were much larger than the one depicted in the illustration I felt an equipment upgrade was in order. More days spent shilly-shallying in the scrap yard scrounging and welding.

The time came when I could procrastinate no further. My round pen was planked seven feet high on solid eight by eight posts and a cast iron casement with cement reinforcement was sunken dead center. My modified breaking rig was a thing of beauty. No poles and buggy wheels for me instead I used heavy duty truck wheels welded on angle iron. Where wood was necessary I used only the finest ash and oak our wood lot could provide. The spokes of the rig were attached to a metal pipe that fit neatly into the casement in the center of the pen. In the drawing Magner seemed to be perched precariously on one of the spokes of his patented rig but there would be none of that for me. I mounted a sturdy car seat on top of a small wooden floor complete with a dash board.

When all was in readiness I decided to give the rig a test run with my old mare attached to it. I thought she would take the thing in her stride but for some reason she didn’t particularly like it. She reluctantly made a few awkward trips around the ring but there was a lot of huffing and snorting going on. That should have been the clue as to what was going to happen next.

When I brought the first filly into the pen my wife Andrea was there to help me. I had devised a starting gate that hung from the fence and blocked the horse from advancing while we hooked her into the rig. It was Andrea’s job to release the gate from outside of the ring after everything was set and I was secure in my seat with the reins in my hands.

What happened next is a bit of a blur but Andrea was there to fill in any of the gaps in my repressed memory. I remember tacking up my whip and saying ”git up” then feeling an unimaginable surge of power. My car seat instantly broke free of its moorings and left me sprawling first on my back and then as the centrifugal force kicked in on my stomach frantically clutching at the plywood deck with fingers and toes. Around and around we went with no letup in speed. In fact as she became accustomed to her orbit she really turned on the steam and added wild kicks and bucks to her repertoire.

If you’ve ever seen the films of the astronauts at Cape Kennedy being tested in the centrifuge you will have an idea of the amount of G force I was being subjected to. I don’t know how many circuits I endured before fate intervened and the center post hopped out of its socket and ceased to be a pivot and commenced to be an anchor of sorts. It dug into the soft ground and started plowing irregular furrows but still didn’t slow the crazed horse to any appreciable degree. In fact, since I was still sprawled face down on the rig I was now in danger of being flung headfirst into the round pen fence. It was then that I remembered something my father had said to me when I was involved in a runaway incident as a boy. I was telling him about all the creative things I had tried to stop the horse in question. He let me ramble on for a bit then the sarcastic old bugger stopped me and said “Did you try saying ‘whoa?’”

Well I hadn’t then but I was ready to give it a go now. I did and lo and behold the filly came to a screeching halt and stood statue still while Andrea bravely entered the arena of death and tied her to the fence.

Whenever I go down to the edge of the woods where I maintain a sizeable metal scrap heap I see the remains of that wonderful breaking rig and remember my narrow escape. I haven’t used it since that fateful day and never shall. I don’t blame old Mr. Magner for leading me astray. I know he would have made the thing work. In his day men were made of better stuff.

P.S. Don’t try this at home