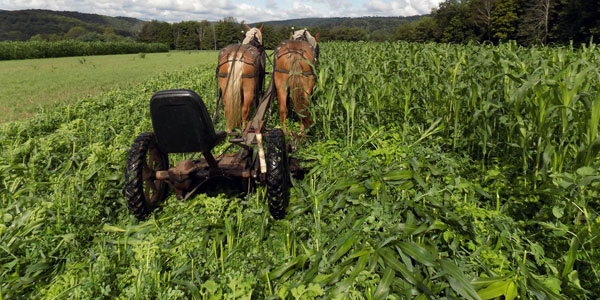 by Anne and Eric Nordell of Trout Run, PA

We have a double standard for planting density in the bio-extensive market garden. We plant all the vegetables in widely spaced rows to insure plenty of moisture, fertility and air circulation for each plant. For the cover crops in the fallow lands, we take just the opposite approach, seeding at a high density to quickly provide ground cover, weed suppression, and biomass.

One reason we have been slow to adopt cover crop cocktails is the very low recommended seeding rate — sometimes as little as 30 lbs per acre — in order to give all of the different species in these diverse mixes lots of room to grow. The mental shift to planting cover crops at a density comparable to our widely spaced vegetables has not come easily.

Another reason we have been teetotalers regarding cover crop cocktails is the practical challenge of managing the top growth of these multi-species mixes. Livestock farmers use mob grazing to remove the top half of the cover crop and trample the rest. To imitate this take half, leave half practice with our old No. 7 McCormick sickle bar mower, we took a page out of Lynn Miller’s Horsedrawn Mower Book.

Page 99 illustrates the seed clover bar-wheel high cutting attachment to raise the cutter bar 3-12” off the ground for topping pasture weeds, mowing roadside ditches, or managing sweet clover for optimum regrowth. Unable to find the original bolt hook and bar-wheel add-ons, we substituted with the walking plow depth wheel and small chains shown in the photos.

Raising the bar created another challenge. The cut residue laying on top of the tall stubble could get hung up on the mower frame or wrap around the fly wheel. To solve this problem, we took another page out of Lynn’s mower manual, completely ruining the resale value of the book — not that we would ever sell this invaluable resource.

Page 85 shows the McIntosh family’s ingenious remedy for what Lynn calls “bountiful cropitis.” They made a shield out of cowhide to protect the pitman from long cut grass. We replicated the idea using a piece of discarded truck bed mat to direct the flow of cut material under the mower.

After several years of successfully using the sweet clover setup with rubber shield for topping mature pasture, we decided to try the modified mower this summer to manage the top growth of two very different cover crop cocktails. The first was a simple five-way mix of nitrogen-fixing clovers (red, crimson and yellow blossom sweet clover) and two very weed competitive grasses (spring barley and sorghum-sudangrass). Planting this mix at a high seeding rate of almost 200 lbs/acre early July, we achieved our long held cover crop goals of fast ground cover, excellent weed suppression, and early biomass production. However, the sorghum-sudangrass (aka sudex) seemed to suffer from the high planting density, perhaps due to the barley getting first dibs at soil nitrogen and moisture.

The second cocktail we trailed was an 11 species mix we purchased from King’s Agri-Seeds in Lancaster, PA (717- 687-6224). Called Maize Pro since it is intended to build soil structure and nitrogen before planting corn, this cocktail contains sudex, sunflowers, hairy vetch, rye, forage peas, phacelia, flax, daikon radish, Persian clover, crimson clover, and alsike clover. We added red and sweet clover to the mix to make sure we had enough leguminous cover over winter.

We planted the Maize Pro mid July, a month earlier than suggested, to increase organic matter production and root growth. We also seeded this mix at twice the recommended rate of 35-40 lbs/ acre to compensate for broadcasting the seed and incorporating it with a spring tooth harrow and rotary hoe rather than using a grain drill. Any lighter and the large sunflower seeds would not have made it through the gate in our hand cranked seeder.

Despite good germination, the Maize Pro took a month longer than our five-way mix to provide soil protection and substantial biomass. On the other hand, all of the components in this cocktail seemed to thrive, including the nitrogen hungry sudex. Although this less densely planted cocktail could have been an invitation to happy hour for the weeds, weeds were not an issue following an extended bare fallow period.

The modified mower did a trouble-free job of grazing off the top of the cover crop cocktails 45 and 85 days after planting, preventing the taller species from becoming too large to incorporate the next spring while giving the smaller plants more opportunity to grow. Trouble-free, that is, with a few exceptions: the pea vines in the Maize Pro tended to drag on the plow wheel shank; if the last swath was not full width, the mowed material could collect on the cutter bar, eventually plugging the sickle; and the horses and mower wheels broke off some of the humongous radishes. Despite these drawbacks, the mower modifications gave us confidence to continue experimenting with multi-species cover crop mixes.

Advocates of cover crop cocktails suggest that at least eight different species are needed to see rapid improvement in soil organic matter and aggregate stability. Based on that advice, the Maize Pro with added clover should increase these aspects of soil health much faster than our simple five-way mix. Future testing may prove this theory correct. However, digging into the soil after the second mowing, the five-way had noticeably superior crumb structure.

We attribute this difference to the higher seeding rate and percentage of small grain in the mix, quickly filling the top soil with fine roots. The five ingredient cocktail, comprised of barley, sudex and three types of clover, also resulted in a much stronger stand of legumes, and a lot more high carbon stubble, going into winter. Next year, we intend to try a cocktail mix halfway between the five-way and Maize Pro in planting density and number of species, to see if this compromise produces the rapid ground cover, biomass production, and soil aggregation we expect from a cover crop while allowing all of the species to thrive.

Several concerned readers asked us what happened to Cultivating Questions? Unfortunately, we had to discontinue the column due to a drought of questions, both questions submitted to us and our own. While waiting for the drought to break, we have revisited and updated a few CQ topics in articles posted at www.covercropsincorporated.wordpress.com