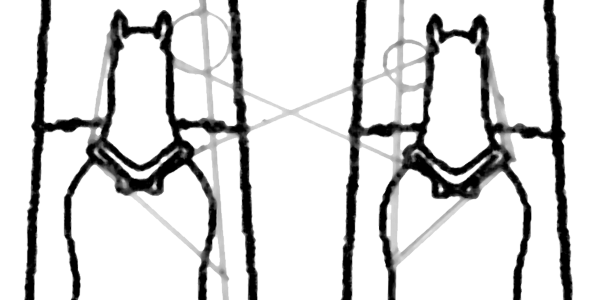 Multiple Hitching with One Set of Lines

Multiple Hitching with One Set of Lines

by Abe A. Raber of Fredricksburg, OH

A great deal of interest has been shown the last several years in using multiple hitches in horse farming, especially in spring fieldwork. The question often asked is how to keep it simple and easy in driving and assembling the hitch as far as lines are concerned. We demonstrated our method at the Horse Progress Days at Mt. Hope, Ohio in 2003 and have been asked numerous times how we drove four, six and eight-horse hitches using only two lines.

The rope and pulley system is an excellent way of hooking horses together. The softness and flexibility of ropes is a plus in keeping shoulders fit and gives horses a sense of confidence when they’re working. The turning of fresh soil in March or April and clatters of traces and birds singing is music to a teamster’s ears, adding to the joy of driving four, six, or eight horses working smoothly together.

We had been using the tandem hitch in a single bottom sulky plow, when it occurred to me that there should be a better way of driving — a method using fewer lines to contend with. When turning at the end of a furrow, you had four lines, two lift levers, sometimes the furrow wheel lever to steer, and, oh yes, the coulter right there to shred the ends of the lines.

I talked to a guy from southern Indiana and he explained how they drive their multiple hitches with two lines. After trying it myself and liking it, I will attempt to explain how it is hooked up. It is quite simple, and takes very little extra hardware and leather.

Here is what you need:

First — The four-inch rings are placed on the wheel team’s (the team closest to the equipment) bridles on the inside, fixed into the short jack strap that holds the bit on the bridle. This is where the inside part of the wheel team’s check line passes through going to the lead team.

Second — The 1/2-inch by 12 to 20-inch straps are attached to the inside branch of the wheel team’s lines coming through the four-inch ring on the bridles, and will connect where the leader’s butt lines would generally snap on. Please note: Start by having those approximately six inches long then as you get to know what your lead team needs. They can be made different lengths to accommodate the way they will walk comfortably.

Third — The 3/4-inch by 30 to 36-inch straps are to cross-tie the wheel team together since their inside check lines go on up to the leader’s. Those go from one inside bit ring to the hame ring that holds the back strap of the harness on the other horse, and vice versa.

The question comes up, “Is the check line adjusted on the wheelers from regular team driving?” Surprisingly, it is not, except on a few occasions where you may want the wheel horses farther apart.

The wheel team should be hooked in the shortest possible link of their traces which keeps it shorter and everybody close to the load. This is where the 16-inch adjustable strap can be made so they all pull alike. To make it a six or eight horse hitch, use a jockey stick on either or both sides as would generally be done in three or four horses abreast.

As we all know, lines were never made to push a horse but to hold them. Just as in the four-line method, a lead horse or team that have the spirit to tighten those lines makes it work great. In the two-line method they are always the same distance apart.

When we started using multiple hitches we used the four-line method, but have now switched to the two-line method and like it very much. I hope this can be of help to all interested teamsters to use in your spring and summer fieldwork. Be careful and always use safety precautions. Never have lines around your back and tied together when sitting or standing on your equipment. Best wishes to all.

Abe and Betty Raber operate a 35-cow Holstein dairy farm and are well-known for their Percheron horses.