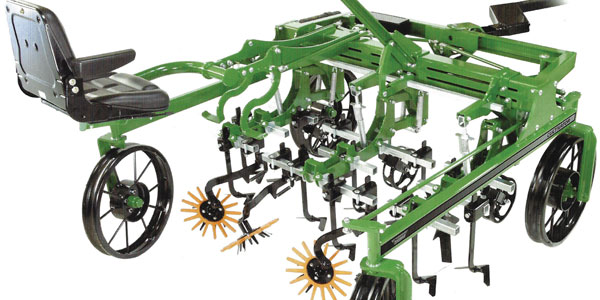 by Leon Wengerd of Dalton, OH

The history and development of the new Pioneer Cultivator started in 2009 through a Horse Progress Days connection with two young men, Jelmer Albada and Ties Ruigrok from Netherlands. Both young men spent a few months working on local Amish farms to learn about animal husbandry and soil fertility. Jelmer returned to Horse Progress Days in 2012 with a presentation on shallow tillage practices that are gaining popularity in Europe and South America.

Shallow Tillage originated in Europe where environmental regulations are much stricter than in America – thrusting them in the forefront of organic weed control. “But how is that possible?” was the question asked by many when they saw the pictures of Jelmer cultivating numerous rows of vegetables with a single horse.

The organic farming movement rapidly gained strongholds in the horse farming community after Organic Valley launched their cooperative in 1988. One of the chronic problems for organic farming is weed control – especially in corn, produce, and other row crop applications. This problem was the reason the Pioneer Tine Weeder was introduced in 2018. This proved to be a big help, but farmers were seeking more and better options for in-row weed control.

In 2018, Leon Hershberger from Cushman Creek Supplies, made a presentation at Horse Progress Days in Clare, MI on the benefits of precision cultivation in produce farming. He shared how he obtained special shanks and shovels from Kult Kress – a company that sources and customizes specialized tools for weed control. Leon mounted these shovels on his Pioneer Homesteader to cultivate his produce fields. According to his presentation, this was a major breakthrough for organic weed control on his farm.

Kult Kress proved to be a great source during our research stage in sourcing different styles of shovels for testing. Tilmor, a company in Orrville, OH that manufacturers a multi-purpose tractor for precision cultivation, connected us to Sam Oshwald Tilton from Lake Shore Technical College. Sam was an expert in the science of Shallow Tillage and was a great resource to learn more about the Stale Seedbed Technique. We attended a Mechanical Tillage Workshop at the University of Michigan a few years ago along with staff from Tilmor to learn more about this new concept. We hosted a breakfast meeting with numerous local produce farmers that yielded a wealth of information – specifically the farmers were looking for a cultivator that had better visibility of the row, more ground clearance for irrigation lines, eliminate sore necks on horses, and better weed control.

This research led to the development of our first prototype Cultivators which were tested in the fall of 2018 in an old produce field below the shop. After numerous trial runs and changes we manufactured the first production run that winter to do extensive field testing in spring of 2019 with plans to take the Cultivator to market by spring of 2020. After the cultivator season was past, we had farmers begging us to sell them new Cultivators. We learned that the concept worked but our machine needed numerous design changes. We decided to take the safe route for another year of testing before going to market.

The shovels and finger weeders performed to our expectations, but operator comfort was still lacking. By raising the seat the operator now has a clear view of the row and the horses. This raise allows the pedals to clear the gangs, even in the raised position. The seat was also changed from an aluminum implement seat to a cushioned tractor seat and arm rests for long hours in the field.

Another concern voiced by numerous farmers was the swaying from the swiveling rear wheels. This was a serious problem when cultivating row crops on hillsides. By adding steering rods from the tongue to the rear wheels, the operator now has precise control of his implement on hillsides and headlands. The additional year of testing yielded a machine that is fine tuned and ready for market.

Many farmers understand the value of taking numerous trips across the field with a spike harrow prior to planting corn. Each trip is spaced a few days apart to allow weeds to germinate just before being uprooted by the harrow. The end result is a relatively weed-free field that gives corn a jump start to stay ahead of any new weeds.

This concept is similar to the Stale Seedbed Technique utilized in Shallow Tillage. Research shows that most weed seeds germinate in the top 2” of soil. By using wide shovels that only penetrate the top 1-1/2” of the soil, there are less weed seeds being brought to the surface. And by overlapping the shovels all existing weeds get disturbed or completely removed.

The delicate finger weeders disturb all the soil in the row to destroy sprouting weeds without harming the crop. Settings are ultra-critical in shallow cultivation to remove the maximum number of weeds with minimal crop damage.

Shallow tillage requires less draft than traditional cultivation making it easier on your horses. While two horses can easily cultivate two rows of corn, many farmers prefer to keep one horse in each row and use three horses for better align- ment. The four-wheel design and lightweight tongue prevents sore necks on your horses. The finger weeders and shallow tillage create a nice level field compared to the ridging caused by traditional cultivation.

Removing all the weeds alongside plastic is a challenge for many produce growers. The combination of our deep ripper shank and vertically mounted finger weeder has proven to effectively remove weeds up against the plastic. The finger weeders are flexible enough to remove and return soil laying on the plastic without tearing the plastic.

The elevated cushioned tractor seat with arm rests provides a clear view of the row and horses along with a comfortable ride when spending long hours in the field.