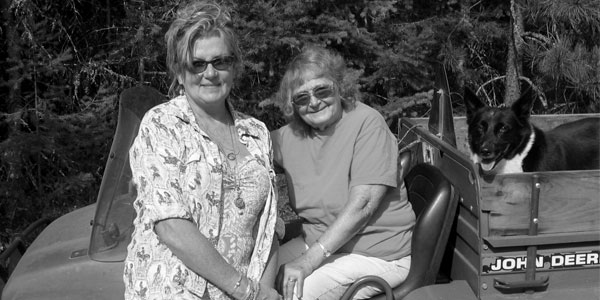 by Kathleen Mulroy of Sagle, ID

Liz Gollen is what could be termed a rural Renaissance woman: She’s a beekeeper; a flower-farmer; a writer, artist and occasional film-maker; a chicken-raiser (for eggs); and, last but certainly not least, a full-time elementary school teacher. She and Archie, her husband of many years, inhabit a beautiful and sturdy hand-built log home on a wooded plot of family land in Sagle, Idaho.

Bee-keeping is a fairly recent venture for Liz. She says she got into it just because she loves honeybees – always has. She likes the sound they make, their industrious nature, how they help flowers, and, of course, the tasty product they produce. She and her flower-farming partner, Peggy, started a couple of years ago with two nukes. A nuke is a starter bee box containing one queen and about 20,000 honeybees. Looking back, Liz laughs at their profound lack of knowledge when they started bee-keeping. “Peggy and I really had no idea what we were doing back then! We bought the nukes from a local guy, put the buzzing critters in the back of my car, and took the boxes back to my property. We set them up near our flower farm, and after that we figured things out on a day-by-day basis. Of course, we had to consult a lot of local experts along the way.”

Liz ruefully tells about her first major mistake as a bee-keeper. “It was on a weekend when I first approached a bee-box. I was just intending to brush some debris off the box, so I didn’t even think about donning protection like a bee helmet. Not surprisingly, a sentry bee – just doing its job – went straight for me. It stung me on the chin and then chased me all the way down the road and back again, buzzing angrily around my head the whole time. My chin swelled up very impressively. I had to go back to my teaching job on Monday, and my students were pretty impressed by my “new” chin! I learned to be very respectful of sentry bees after that.”

She adds, “It’s kind of amazing that Peggy and I were able to gather four gallons of very good honey the first season we kept bees.” She says would-be beekeepers should grow herbs like mint and thyme around the bee-boxes. Not only do these herbs seem to help prevent the mites which have so devastated honeybee colonies throughout the Inland Northwest and beyond, the plants also add to the intensity of the honey’s flavor.

Liz says, “Somehow, we made it through the first winter with one of the colonies intact. We’re very happy about that. We want to grow our production, hopefully up to 12 gallons. That way we can sell some and keep some.”

Flower-farming is another important part of Liz’s life. A few years ago, she began transforming a half-acre area on Gollen land into a flower and vegetable garden. It was a big job, she says – much bigger than she’d realized it would be because the ground is extremely rocky. When she and Peggy decided the plot was adequate for planting, Liz picked up a load of green manure from her motherin- law’s barn and Archie plowed it into the soil. Then she planted three-quarters of the garden in mixed vegetables and five-eighths in flowers. The second year of planting, she didn’t use manure; Archie just plowed the dead plants into the ground. These days, Liz alternates using mature and green manure with plowing under the organic debris. Doing this gives her such rich soil, the flowers practically grow themselves.

Many of the flowers Liz and Peggy plant are dahlias, a variety Liz has loved since her mother-in-law introduced it to her some 30 years ago. Dinner Plates, Cactus Dahlias, and many other dahlias spring from the Gollen garden in a rainbow of colors. The types of dahlias may change from season to season, depending on what Liz decides to plant. Most of the flowers are destined to grace tables at local weddings and to be sold at Liz and Peggy’s local flower-stand. One of Liz’s favorite dahlias has “wavy spikes which are white on the edges, then pink, and pale yellow in the center. It’s so gorgeous!”

Liz usually doesn’t use seed catalogs to buy dahlia tubers because she feels that too frequently the tubers are “small – more like string beans than small potatoes, which is what they should be like.” She prefers trading with and buying dahlia tubers from local women who are equally passionate about the variety. Surprisingly, Liz also scores some unusual tubers when she shops early in the season at the local WalMart and Home Depot.

She divulges one of her secrets for growing spectacularly beautiful dahlias: “You have to break up the big clumps of tubers every year, because every year the clumps keep getting bigger. I like to have from six to eight tubers in a clump, which I then plant in a trench that I size especially for the clump.”

Among the many vegetables Liz grows for her family and friends is a very special heirloom bean. The Bacon Bean, she says, was so named generations ago – probably because it was usually stewed or baked with bacon or ham hocks. The bean is small (about one centimeter) and golden, with a deliciously unique flavor. And it comes with a background story: Liz’s father-in-law, who would be 109 now if he had lived, was given the bean at the age of 18 by a woman who was in her eighties. That woman had received the bean from someone when she was a young woman, and so on, back at least two more generations. Liz says she has never seen this bean anywhere else – not in any seed catalog or store; it’s a true heirloom.

Liz has been teaching at Sagle Elementary School since 1994, when she received her elementary-school teaching credential. Before jumping full-time into teaching, she was a full-time mom to three active boys. Liz frequently volunteered in their classrooms, which is how she decided that she so liked working with kids that it just made sense for her to become a teacher. She says she particularly enjoys teaching sixth-graders because, “They’re always asking, ‘Who am I? Where am I going in life?’ I love that they question everything! Questioning is fun, and it’s usually productive.”

Writing is another of Liz’s passions. After writing short fiction for many years, in 2004, she received her Master’s in Creative Writing from Eastern Washington University. She’s had several short stories published, and last year she finished her first novel, “Tiger Lily’s Ice Shack.” The book is very loosely based on some of her youthful, adventurous experiences in the Inland Northwest. She had the book professionally copy-edited and recently published it as an Amazon e-book.

Liz loves art – a love which has followed her into the classroom. In addition to the many art projects they enjoy, each year her students have the opportunity to create all of the scenery and costumes for Liz’s own version of “Romeo and Juliet.” The kids then get to perform the play for family members and friends. It’s the highlight of the year for many sixth-graders at Sagle Elementary.

How Liz finds enough time to do everything she does – and do it so well – is something of a mystery to her friends and family. I think she manages it because she brings passion and creativity to everything in which she becomes involved.