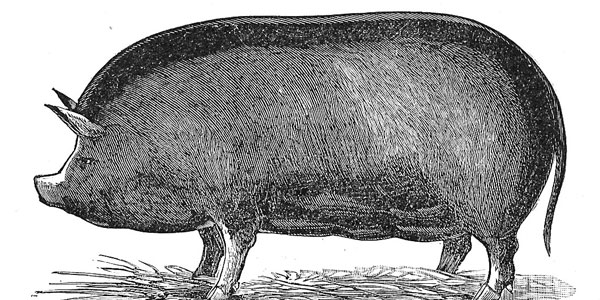 excerpt from How the Farm Pays by William Crozier & Peter Henderson, 1902

Usually the keeping of hogs in any large number on the farm is not profitable. Like many other things, it is confined to sections of the country where it is made a special business. Still, it is well on most farms at least to have a few to eat up the garbage, or the offal from the dairy, and I will endeavor to state what I believe is the best method of raising them, and the kinds best suited for the purposes of the average farm.

I have bred the Cheshire, Poland-China and Chester White hogs. All these breeds have large bone and a great deal of offal, and I found that they were not profitable and abandoned them. I then imported the White Suffolks, which produced more fat than any other hog I ever raised. They are small in the bone, with little offal, and are quiet and easy keepers, while the Chester Whites seem to be always looking for more feed, and are never content, and do not mature until two or three years old, and then their meat brings in our markets two or three cents per pound less than the Suffolks.

I next imported Berkshires, in 1862. These were found to be better than any kind previously tried. They are easy keepers, make much lean meat with the fat, and mature early. I have often had them weigh, when dressed, 250 pounds at eight months old. Their hams and shoulders, when properly cured, find a ready market in all large cities, and are of such superior quality that private purchasers often order them from our farmers here six months in advance. I have made importations, about once a year, of prize Berkshires from England. In 1869 I imported fourteen hogs, a few of which I sold, to go to Missouri, for $600 each. They were exhibited at the great Pork Packers’ Exhibition, at St. Louis — in 1872, I think it was — where there were some sixteen hundred entries of all breeds, from Europe, Canada and the United States, and these, with their progeny, took the first prize on boar and sow; first and second prizes on sow and litter of pigs; first prize on hogs under a year old, and prize on pigs under six months old. I mention these facts to show the superiority of the breed, because these animals were brought into competition with others of all breeds, and of course with the best specimens of them which could be procured. The Berkshire is black in both hair and skin; but in dressing, the black skin comes off with the hair, and the pork dresses white. The hair is fine and glossy, but rather thin. There is a white splash on the face; the feet are white, and so is the end of the tail. These peculiar marks are all reproduced very exactly in the pure breed. The ears are pricked and very small; the face is short and dished; the neck is very short and thick; the shoulders broad; the sides are deep, and the hams broad and thick, the legs being very short and the bone light and fine. This form makes the very best ham and bacon hog, and as its habit is to make a large proportion of lean meat to the fat produced, and to produce more meat on the same feed and to do it more quickly than any other breed, and the meat being sweeter and of better quality, I must say I know of no other variety of swine that is so desirable for the farmer of hams, shoulders and bacon.

Next to the Berkshire comes the Poland-China, which is quite popular in the West, where pork growing is one of the most prominent industries of the farm and consumes a considerable part of the large corn crop. This hog is mixed white and black in color, the ears are lopped, the carcass is large and fat. It therefore suits the pork packers, whose aim is fat pork for packing, rather than meaty pork for curing for sides and bacon. The importance of good breeding of swine is apparent when we consider that about ten million hogs are packed every year in the West and that the whole stock in the country is more than forty millions.

There is another black breed of swine, which has no white mark about it, and which is popular in some places. This is the Essex. It is not as good a bacon hog as the Berkshire, although it is excellent when young for light pork. When full grown it is fat, but it is not large enough for the packer’s use. Among farmers who prefer white hogs, the large Yorkshire is considered as profitable, but it is a large feeder, and I think on the whole if the Berkshire were kept by farmers more extensively, both wholly, or for crossing on their present mixed stock, that the value of their swine would be doubled.

There is nothing special to be said in regard to the feeding of hogs, excepting that when young they should not be overfed. I feed a mixture of buttermilk and bran twice a day, and in the wintertime they are fed cooked roots and pea meal, which is one of the best feeds that can be given. The sows are put into a pen a week or ten days before their time for farrowing. There is but little bedding left in the pen at that time and that fine and short, so that the young pigs may not be entangled in it; and they are watched closely. The pigs are left as dropped, and are then put into a box or basket, and as soon as the sow recovers they are put back in the pen, and left with her; but she requires watching, as they will often get in behind, between the sow and the wall of the pen, and get crushed. To prevent this I nail a rail or round pole a few inches from the wall, and a few inches high. The pigs are generally left with the sow until six or eight weeks old, when they are weaned and fed with a little new milk and mush, made of oatmeal and bran. I have several times put the boar to the sow the third day after she has dropped her pigs. By this there is time saved, as we can get three litters in a year, whereas if we neglected it at that time, the sow probably would not be in farrow again for three months. It is my opinion that boars should never be used longer than two years, as they become vicious and dangerous.

Q. Without taking into consideration the fancy prices at which these Berkshires have sold, how would they compare in profit with sheep?

A. I think they are not as profitable as sheep. The wool pays for keeping the sheep, and six months in the year they are on pasture, and require but very little care, while the hog has to be attended to twice daily through this full term, and unless we have a special market for hams and shoulders, and sides of bacon, it hardly pays to raise hogs here. But the farmer can ill afford to be without them, as they are used to root among the manure and turn it over, and generally get their living upon what would otherwise be wasted.

When pork is prepared for sale in the form of hams and bacon, it must be home cured, because then we get the profit in this work. A hog should not be fed for twelve hours before slaughtering. When it is scalded to remove the hair it is necessary to avoid over scalding, or the hair becomes set and cannot be scraped off. This of course injures it for sale to private customers or to the best dealers. I find 180 degrees to be the proper temperature for the water. The carcass should hang where it will not be frozen for twenty-four hours. Where a farmer has ten or twenty hogs to dress during the season, he will find it convenient to have a shed or place properly provided and furnished for this work, with a boiler and scalding vat.

My method of curing is as follows: When the meat has been properly cut up it is well rubbed with salt and left on the benches to drain for twenty-four hours. This removes the moisture from it. Seven and one-half pounds of salt, two and one-half pounds of brown sugar, four ounces of saltpeter, are then put in as much water as will dissolve them completely, and two ounces of cayenne pepper is added. The liquid is boiled a few minutes and skimmed and set aside to cool. Meanwhile the meat is rubbed with a mixture of the same, and is closely packed in the barrels or tubs, and the pickle is poured over it until it is covered. In six weeks it is cured and is ready for smoking. It is smoked with hickory brush wood or corn cobs, or both, one hour a day for ten days. The first is made outside of the smoke-house and the smoke is carried in by a flue, so that it is cooled and does not warm the meat. After ten days the meat is rubbed with pepper and is ready for sale, or if to be kept should be packed in close boxes with wheat chaff or cut straw, and kept in a dry, cool place.

Hams and bacon are frequently injured by a small beetle, which lays its eggs upon the meat, and when these hatch the small worms bore into the meat and harbor near the bone. This insect is a variety of weevil, a small brown beetle, and the larvae are small white grubs, which are commonly called skippers. It is very important that the meat should be protected against this pest, or it may be damaged so as to spoil it for sale and also injure it for use. There are several ways of doing this. One of the best and the most convenient is to rub the meat well with ground pepper, and then pack it in boxes in oat or wheat chaff or in finely cut hay; a few inches in depth should be covered over the meat, and the box closed tightly. It should be kept in a dry, cool place. The dry packing will absorb all the moisture, and prevent the meat from becoming moldy.