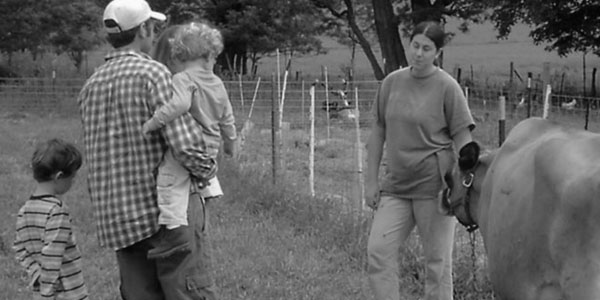 by Arthur Bolduc of Howard, OH

A trip to their grandparent’s or some relative’s farm was once something every child looked forward to. There were baby chicks, ducks, and geese to feed; there were newborn calves, lambs, and perhaps a litter of pigs to care for; cows to milk and a vegetable garden to weed and gather food that went directly to the kitchen. Children learned to appreciate wholesome, fresh food, where it came from, how it was grown, and a respect for farming.

All but a handful of those family farms, except here in Amish country, are now a thing of the past. Most children, and too many adults, today believe their food is somehow created in the supermarket. And it would be very disturbing to take a child to Buckeye Egg Farm or some confinement cattle farm to show them where most of their food really comes from. But at least once a year the Rickard family in Fredericktown, Ohio open the gates of their Foxhollow Farm to children of all ages to show them how wholesome, nutritious food was and is still being grown.

The Rickard’s, Bruce and Lisa and their two children, Jesse, 19, and Hanna, 17, raise sheep, cattle, and chickens on their 280 acre farm. Except for the woodlot, the farm is devoted to pasture and hay. The animals are pastured and grass or hay is fed outdoors on rotated pastures the entire year. Only the hen’s diet is supplemented with grain grown on organically maintained farms, and they are free to range over the farm, often following the cattle, gleaning bugs, insect larvae and plants. They spend much of their time during the winter in a plastic covered hoop house.

The Rickard’s arrived at their farm by way of the technological highway. Both have graduate degrees, Lisa in Engineering and Bruce in Education. They worked for AT&T designing and developing techniques and systems in communication – too often where it wasn’t needed, but could be promoted and exploited commercially. Aware that their work was being used to help large food and other monopolies to shape and control our economy, they decided to change careers and find expression for their lives in a better atmosphere in which to raise and educate Jesse and Hanna.

Well aware of what was happening to our food supply, they decided to go into sustainable farming. Lisa, a city girl born and bred, had no experience in agriculture; and Bruce’s experience was limited to when he was a small child and his father gave up part-time farming to pursue an engineering career. Not exactly resumes that would excite a farm bank loan officer. However, they did have incentive, desire and good study skills and habits. Giving up good paying careers to go into farming did make their intelligence suspect, but they have proved the skeptics wrong and now steward what many in the industry consider a prototype for a sustainable, family operated sheep farm.

Home schooled on their farm, Jesse and Hanna have grown into strong, healthy and intelligent young adults now on the threshold of college careers. Both have been involved in youth groups on and off the farm. Hanna has helped in the library summer reading program for children, and Jesse has been involved in promoting conservation and sustainable agriculture. I doubt the agricultural colleges have much to teach either of them, but they have the liberal arts world to explore to find useful careers.

Home-schooled groups have been regular visitors and guests of Jesse and Hanna on the farm. But at the Farmer’s Market on the square in Mt. Vernon the Rickards spend as much time answering questions about their farm as they do about the products they sell. They have a lot of pictures on display to help answer these questions, but that only makes customers more curious and want to visit the farm. Weather, workload, and other factors make it impossible to keep the welcome mat out, but about mid-June with shearing and lambing over with, the Rickards have an ‘open house day’ for all to come and visit.

In June the weather is still mild, lambs are frolicking about, new chicks are on the farm, and the grass-covered hills are beautiful. This year Jesse was out in Wisconsin at a sustainable farming conference, so Hanna had to pick up the slack explaining the farm operation to visitors while her dad ran the tractor shuttle pulling a hayride wagon, Aunt Martha Folley ran the barbecue, and mom tried to coordinate the whole affair.

Foxhollow Farm is a sustainable operated sheep, cattle, and poultry farm where the animals are raised on pasture and fed a hay and grass diet with some mineral supplements. Ohio soils are deficient in selenium, and that is one mineral level that stockmen have to be especially aware of.

No manufactured fertilizers are used on the soil. Legumes such as clover and alfalfa are part of the pasture and hay mixtures and supply free nitrogen from the air to grow healthy, protein nutritious grass.

Sheep and cattle are ruminants, that is, they have unique four compartment stomachs designed to digest grass and other high fiber vegetation. Since they are not being pushed for unnatural fast growth with grain and growth hormones, and neither are they confined to filthy, stressful feed lots that restrict their exercise and prevent them from burning or wasting calories, they are not medicated on antibiotics or other drugs.

The poultry have a different digestive system that in nature includes all kinds of plant seeds, grain, and much of their nutrition is supplied from grain grown on an organic managed grain farm. With the poultry foraging along with the livestock devouring high protein fly larva and other grubs and bugs that are part of their natural diet, flies and other pests are not a problem on the farm and pesticides are not needed.

Hanna’s teaching skills, acquired working with children in the library summer reading program, were evident as she guided the visitors around the farm and explained how the farm was managed and answer their many questions.

Domesticated farm animals do have to be slaughtered to feed our population. That is a fact of life, but they don’t have to be raised under cruel, filthy, and inhumane conditions in the process. At Foxhollow Farm visitors see how livestock is raised on chemical-free, clean, stress-free pastures.

Hens free range and glean a third of their diet from pastures. Their beaks don’t have to be clipped to reduce the damage from cannibalism as they do when raised in cages stacked six high and are defecating all over each other, and they are free of antibiotics and growth hormones.

Cattle and sheep are free to move about on rotated pastures and to grow naturally in the sunshine and fresh air on a diet of grass grown on soil free of acid fertilizers. There are no expensive manure lagoons and manure slurry-handling equipment to foul the air, soil and well water for miles around.

The only danger to visitors is electric fences that are turned off during open house. The Rickard family lives on a farm free of chemicals where Jesse and Hanna can have their friends over to roam the fields and woods at will and the worse than can happen to them is a touch of poison ivy.

Meadow birds still nest at Foxhollow Farm free from herbicides and other toxic chemicals. Pasture mowing sometimes has to be delayed during nesting season, but there is always other work to do in the meantime, if only bird watching.

Jesse and Hanna have had a wonderful life growing up at Foxhollow Farm, and when they go off to college they will leave a huge void behind in the lives of their parents, their Aunt Martha, those of us who sell at the Farmer’s Market in Mt. Vernon, and their many other friends, and none will miss them more than the little children who look forward to the annual ‘open house’ at Foxhollow Farm.