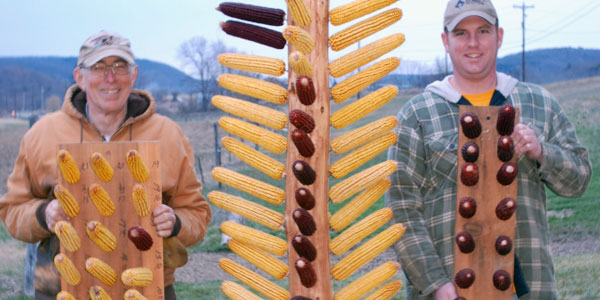 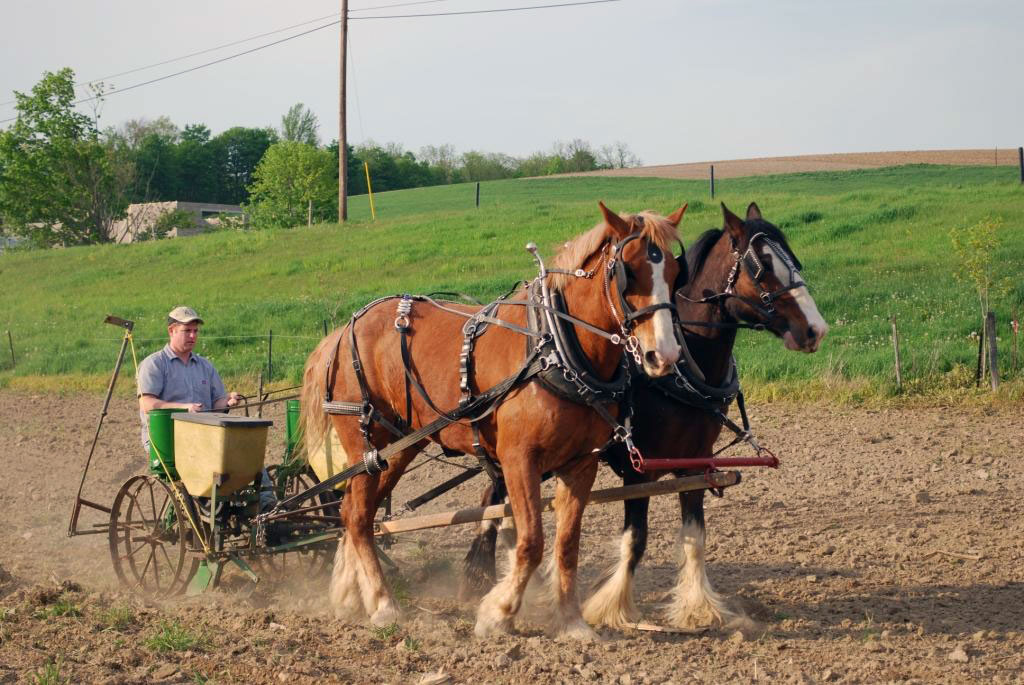 After hearing stories about great uncle Wilson Vastine’s Lancaster Surecrop corn, I purchased my own Lancaster County Surecrop seed, then available from Schell Seed Company in Pennsylvania, in 1971. The company also marketed Boone County White and eight-row yellow seed. Unfortunately, the operation closed after the Susquehanna River flooded in 1972.

My Lancaster County Surecrop failed because of its poor standabililty; however, I didn’t lose my interest in open-pollinated corn.

Later in the 1970s, in reading the Draft Horse Journal, I noticed an advertisement, one posted by Steven Young of Ohio, which offered white cap yellow dent corn. I purchased a bushel and subsequently shared the seed with Edwin Johnson, Morris and David Cotner (father and son). Again, we all experienced problems with standability.

After growing hybrid corn in the 1980s, I purchased Reid’s yellow dent seed and Krug from Ned Place of Wapakoneta, Ohio. I still use the yellow dent from that original purchase. Standability still vexes me, but I cut the corn by hand and shock it with a shocking horse, when the crop is dented in early September. By cutting and shocking the corn, I can get it before it falls down. I then husk the shocks in the field and shock the fodder for feed and/ or bedding for winter. 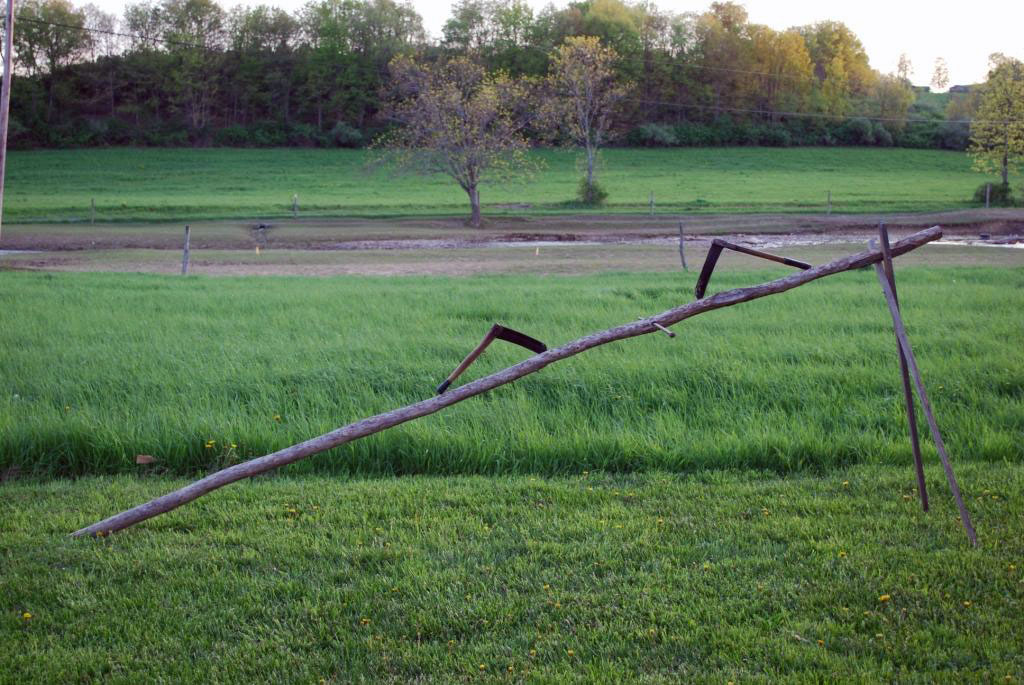 Shocking Horse and Cutters – horse used to hold up shocks while shocking and hand cutters used. 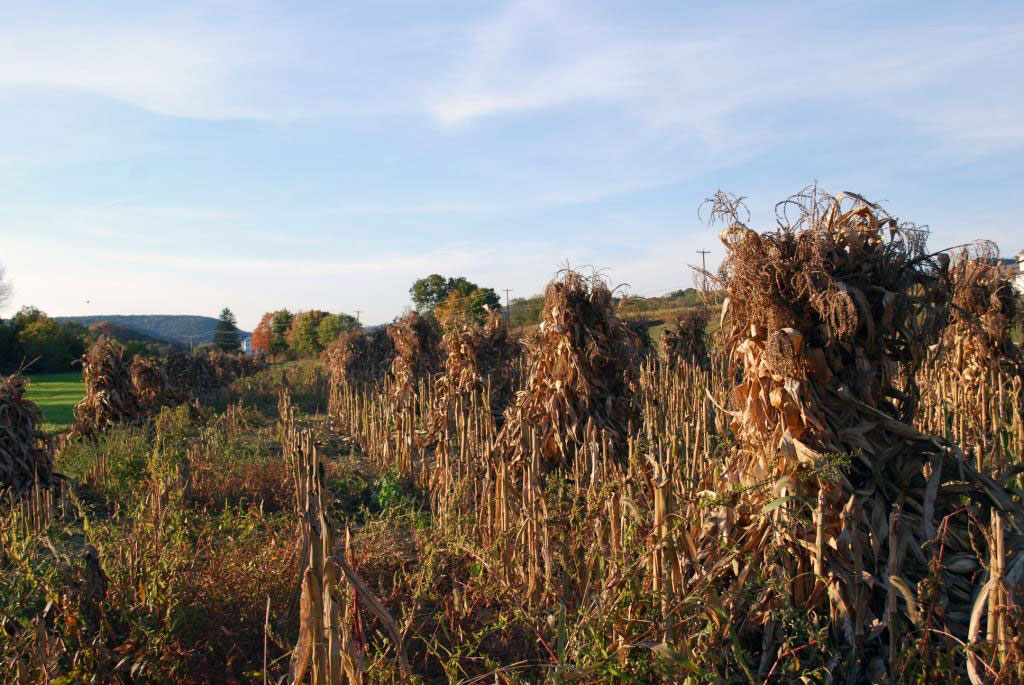 The old way of selecting seed from open-pollinated corn involved selecting the best ears from the poorest ground. I do not grow that much corn, but I usually employ six draft horses to improve soil fertility. I rotate crops and grow corn on sod, as well. Noticeable poor spots in the corn field rarely emerge.

I have tried to select perfect ears based on the open-pollinated seed corn standards of the past. I learned these standards from old agricultural texts. 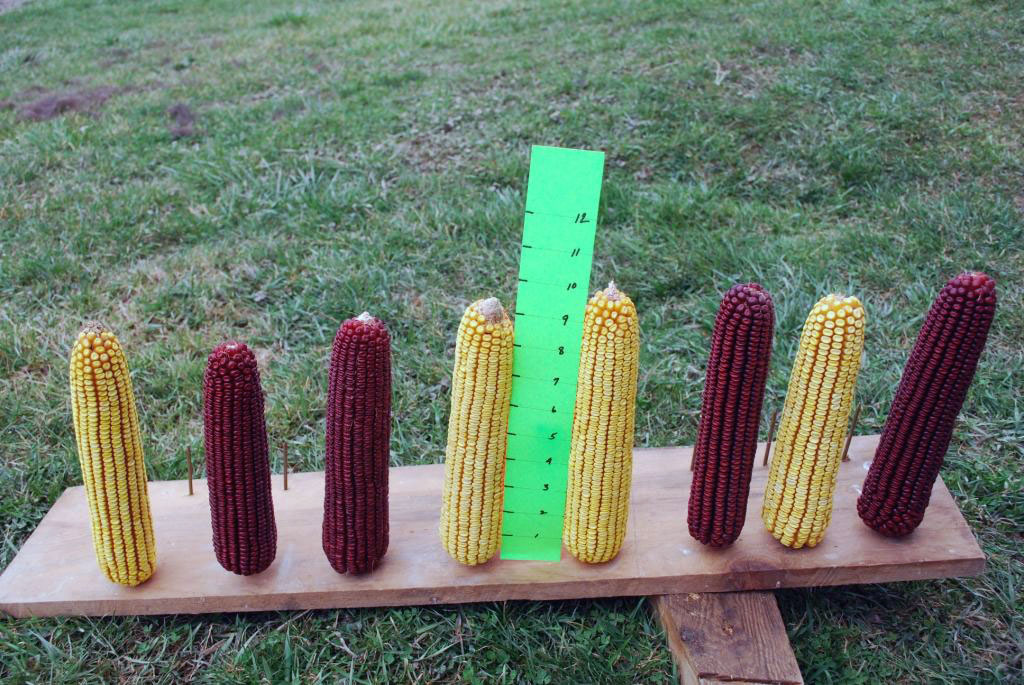 Seed ear selection – shows the quality we look for and the average length of the ears.

The chosen ears of Reid’s average from 9 to 10.5 inches long and have smooth, well-formed grains in straight rows. I try to select ears with grains that extend to the end of the cob. Since I exhibit at the Bloomsburg Fair in Bloomsburg, Pennsylvania, during the last week of September, I begin my selection when I cut the corn. I cut the crop later than I used to at the beginning of September, so the ears are well dented and somewhat drier than formerly. The husks are usually brown, but the leaves are still green. At this point, the fodder makes excellent feed. I can start husking corn at the end of September or the beginning of October. I make my final selection of seed at the time of husking. Because of the effect freezing might have on the germs of the seed grains, I try not to let the seed ears freeze.

The standability improves somewhat through selection of ears that are not as high on stalks. Rotating the corn fields also helps eliminate corn borer which also weakens stalks.

In 2010, I purchased a 999 John Deere planter, one with plateless units, from Leon M. Brubaker of Port Trevorton, Pennsylvania. I planted corn thicker in rows than I normally do, but the crop did well. Our planter is set at 40 inch rows. It makes sense not to go under 36 inches with rows in growing open-pollinated corn. Generally, I try to cultivate twice, but this past year, I only cultivated once. The crop did well, planted on sod we had plowed in the fall and harrowed twice the day we planted. I orchestrated all the work with horses. 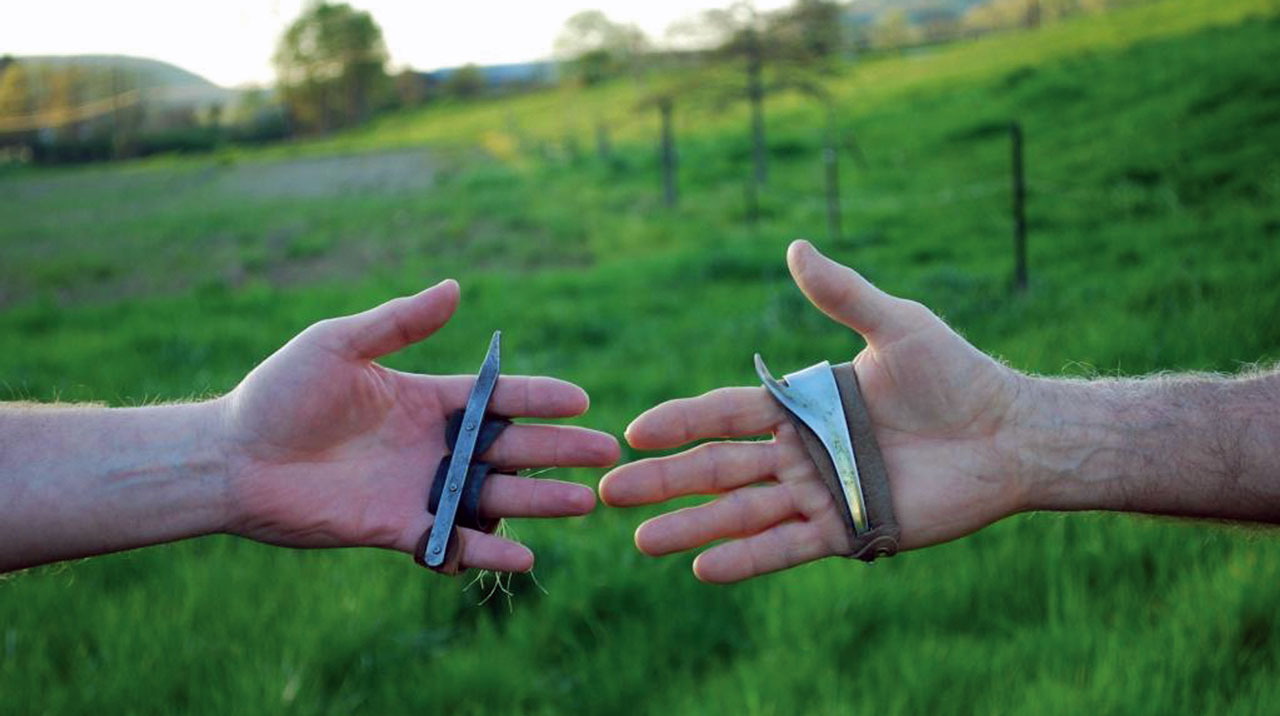 Husking Pegs – two different versions of the husking pegs we use.

I still believe in shelling the grains from an ear at the butt and tip; I only plant the flats from each ear. Although this process is unnecessary with a plateless planter. I hand shell the corn for seed but still may eliminate some undesirable seeds, via a pocketknife blade. Prior to having a plateless planter, we graded the corn with a hand held corn grader. 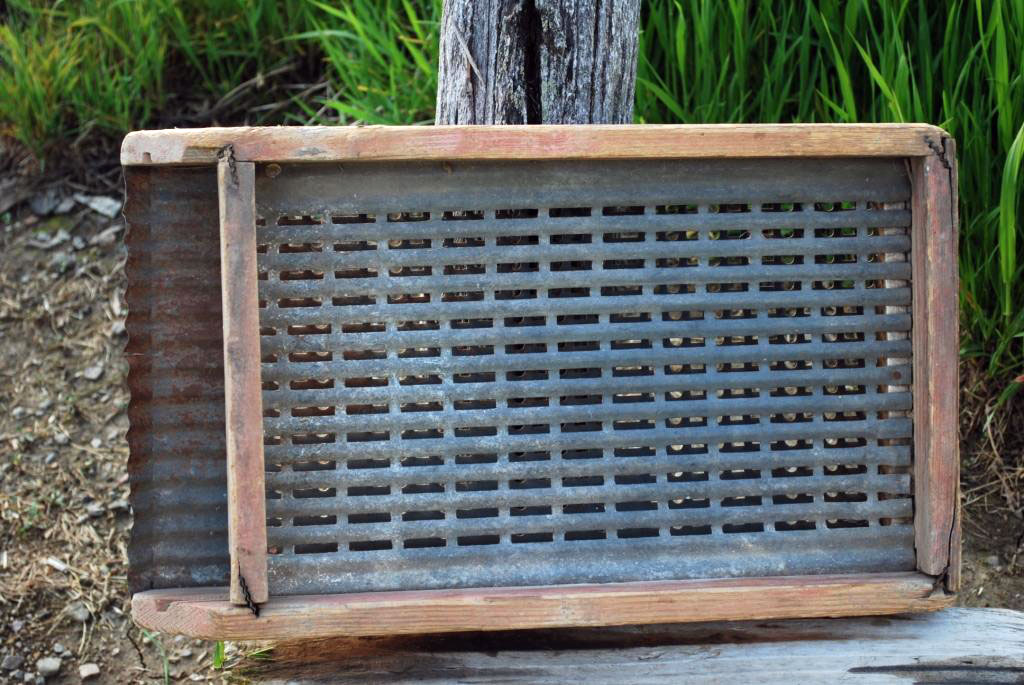 This year, 2011, I am adding another open pollinated corn. Titus Martin Jr. of Watsontown, Pennsylvania is the vendor. The corn fairs well in our section of Pennsylvania. The corn ears grow 10-12 inches long and form lower on the stalks, thus seeming to improve standability. I researched the field corn right before husking. The corn is probably 100-105 day which contrasts to the Reid’s: about 90 day. The corn is a mixture of yellow and orange-red ears.

My family and I have found growing open pollinated field corn interesting. During autumn when we husk the corn, we frequently hear comments about the shocks and red/yellow corn ears in the piles, just waiting to be picked up by a horse-drawn wagon. Later, horses eat the extremely hard grain, which undoubtedly is suitable for their teeth. Occasionally, when we sell corn, we warn customers about needing to feed their feed grinders at a reduced speed.

We are usually the only people in our township who raise this crop and harvest it as described.

I would like to share an old method of tying corn fodder, one with rye straw that can be raised in a portion of a farm garden. Cut the rye, by hand, before it blossoms, in order to avoid the seed from spreading. Hand bundle and then shock the rye to dry it out. Then store the rye after drying it inside. Soak the rye straw in water, so it maintains its flexibility. Use several stalks of rye around a fodder sheaf and twist into a knot. Tying fodder this way minimizes rodent damage on sheaf bands and does not have to be removed when using for livestock feed or bedding. 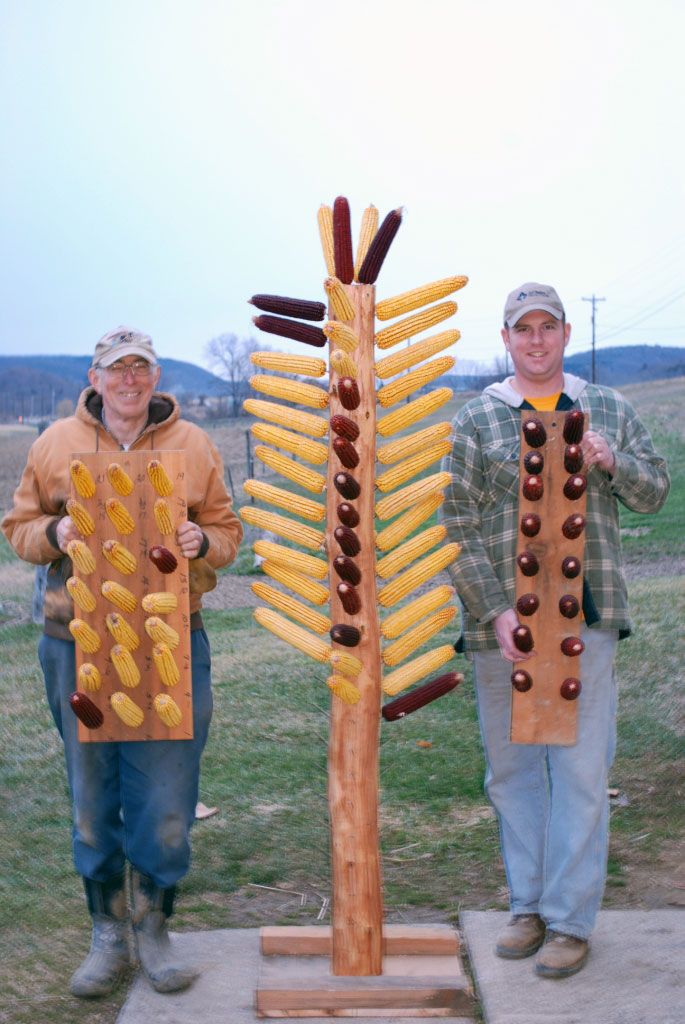 This corn tree holds sufficient corn to plant 15 acres on the check row system. The corn tree pictured is a scaled down version, one holding only 92 ears. 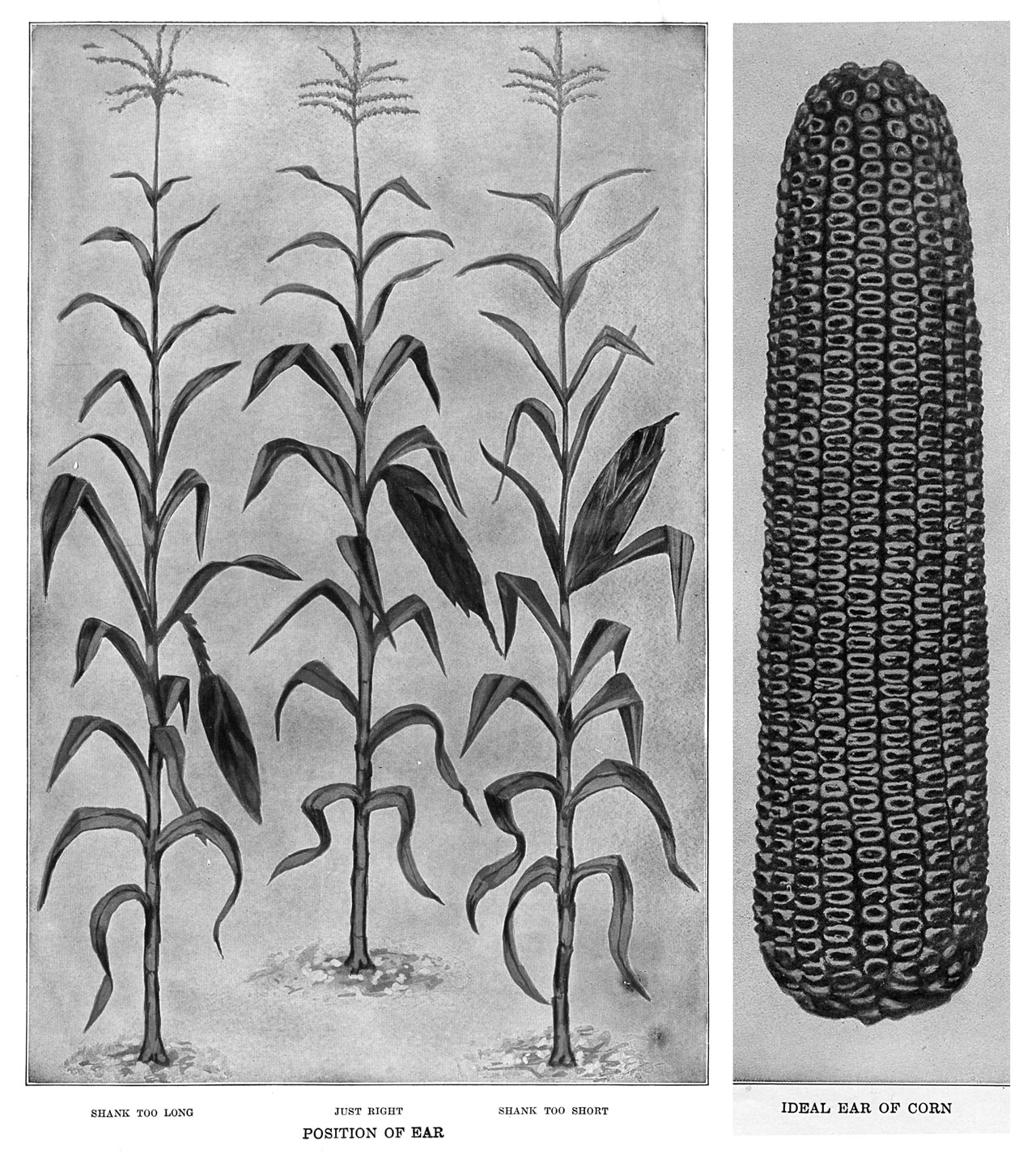